War lines get forged in Valyrian steel as the events of the Season 1 finale ensure there’s no going back.

Game of ThronesHBOHouse Of The DragonTV Show Reviews
By Divij Sonak On Oct 24, 2022 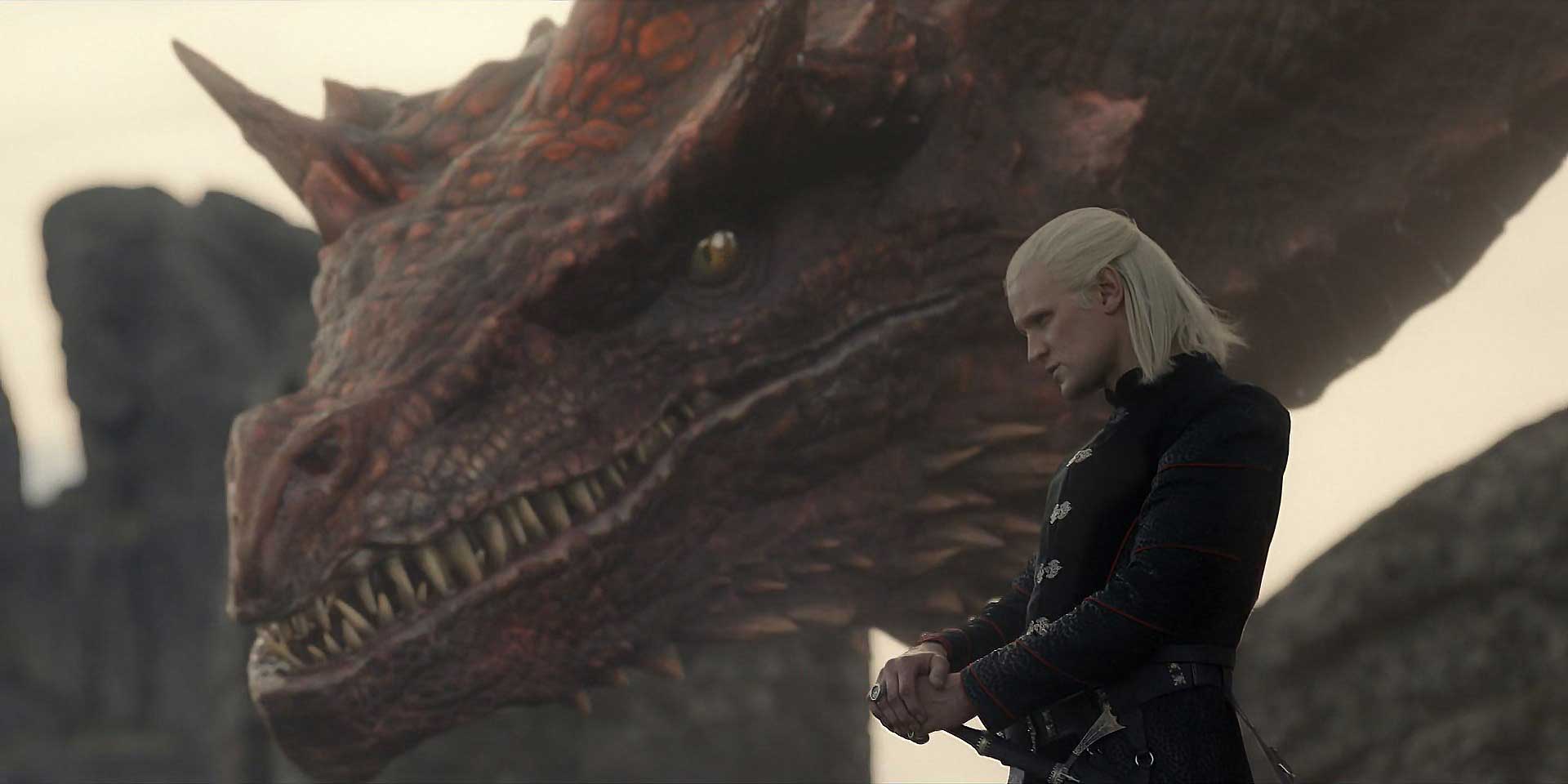 Even casual House of the Dragon fans who haven’t read the books and whose primary window into Martin’s Westerosi history is the show are well aware of what it’s all been leading to. The endgame is a high-stakes Targaryen Civil War dubbed the Dance of the Dragons that tears the Targaryen family dynasty apart. For this to happen though, there has to be a well-established point of no return. An event or a series of events of such magnitude that their consequences remain irreversible, their scars linger on for generations to come, and their impact draws in key characters to battle by forever changing their stance and how they view the central conflict.

After watching the Season 1 finale of House of the Dragon and pondering over the rest of the season, it’s become increasingly clear to me that the entire series was building up towards this inevitable cliff. A highpoint from which our characters take a plunge that would only descend them downward into hell and destroy them from within. It’s not as much as this one even singlehandedly changes the course of history. Rather, this event is the final straw in a series of ill-timed misunderstandings, burgeoning conflicts and escalating rivalries that ultimately aligns Targaryen factions and firmly establishes Rhaenyra’s driving motivators for what lies ahead. This is a point of no return that the series has been gradually building up with, so that we understand all the characters, their backstories, their histories and their betrayals before Season 2 blows things up with the commencement of an all-out war.

Rhaenyra and Daemon were conspicious by their absence in the show’s penultimate episode, a fact that was not lost upon critics and fans alike. Naturally then, the series continues its third episode without a time jump as it catches up its main characters to what has gone down in King’s Landing. Showrunner Ryan Condal, also serving as the writer of the series finale, uses Rhaenys who rode Meleys out of the Dragonpit in Episode 9 as the messenger the incestious couple need to inform them of the goings on in the capital. Understandably, Rhaenyra is concerned at the betrayal while Daemon is aghast and swings into action, commanding ravens to be sent to deliver messages, assimmilate an army and march into battle to forcefully take what’s rightfully theirs. He did it once with the Stepstones, and he was alone back then. He can certainly do it again.

Rhaenyra is expecting yet again, but eschews all help as she chooses to deliver the baby completely on her own. This show is certainly going to inspire a handful of real-life couples to go childless with its horrific, painful and often gruesome depictions of medieval childbirth, without any access to modern-day tools. Emily D’Arcy does a marvelous job conveying the pain of delivering a child, only to end up with a dead baby, very strikingly echoing and resembling her own mother’s painstaking delivery in the series premiere and bringing things full circle. She also makes her own sons see her in this weak condition, perhaps hopeful that they will grow on to respect women and the difficulty of labor unlike the other Targaryen children who father countless bastards without blinking an eye. The dead child’s funeral is yet again held out in the open in a poignant callback to where it all started.

Her internal struggles notwithstanding, she is coronated Queen in her own way and orders Daemon to step down and not do anything drastic. Much like Alicent then, Rhaenyra is genuine in the bond that she rekindled with her long lost friend, and does not want any needless harm to be inflicted upon them, nor does she want her outnumbered men marching towards their own slaughter. Both sides own dragons to even the odds, so that rules out setting King’s Landing ablaze. And in a rather telling foreshadowing of what would eventually befall the capital, Rhaenyra asserts that she is not interested in ruling over a kingdom of ashes. Didn’t Daenerys hold similar notions?

The right thing to do then, is to build strength by calling upon favors from old friends. The sons volunteer to deliver the message. Yet again, Rhaenyra displays her nobility by calling upon them to travel not as warriors, but as messengers. Of course, it turns out that they’re too late. When Lucerys arrives at the Baratheon stronghold, he sees Aemond already there. Despite being taunted and mocked by Aemond, Lucerys displays a reluctance in engaging in direct combat with him. For what it’s wort, Luce would’ve certainly made for an honorable king, much like his father Viserys. Then again, Aemond wouldn’t have any of it and riding Vhagar, he gives Lucerys a chase who’s headed home riding Vermax. Both dragons get too caught up in the battle and disobey their masters. Vermax spews fire on Vhagar who, taking it personally, chews Vermax to pieces, killing Lucerys in the process.

For any mother, especially one who’s just lost a child, the murder of her son is bound to be the last straw. Until now, Rhaenyra has been exercising restraint, living up to the last words of Viserys who called for a peaceful realm to fight the real threat of White Walkers that lies ahead – a threat so big that it will need everyone to ally and battle in unison. Consequently, something really big had to happen to sway her in the other direction. And the death of her son at the hands of his cousin is the final nail in the coffin, the push that Rhaenyra needs to turn her into The Black Queen. Sure, we as viewers could argue that Aemond, despite being the psycopathic evil that he comes across as, did not really want things to escalate this bad. He certainly did not want it. We buy it. But we doubt anyone except his mother will buy his word when everything that happened took place 10,000 feet in the sky, above the clouds. Not even a passing chance that a passerby could have witnessed it. If anything, Aemond’s going to have more problems as Boros Baratheon witnessed him charging towards his brother.

On the surface, some viewers could find this to be a bit too convenient. But showrunners Ryan Condal and Miguel Sapochnik have cleverly planted the seeds of discontent across prior episodes for this to emerge as a natural outcome. The children never really got along to begin with. Aemond being bullied as a child made him harbor resentment when grown up. At the other end, Jacaerys and Lucerys being the bastard “Strong” sons instead of Velaryon heirs led them to grow up with their own set of acceptance issues. The family dinner in Episode 8 only served to heighten the tension and remind us that the feud still persists. And yet, Aemond’s look of horror on seeing Lucerys falling out of the sky torn into pieces adds a fascinating dimension to someoen who until now always gave evil, cold, killer stares: even the worst part of him didn’t wish for this to happen. But who’s going to believe him anyway.

Despite my focal point being the fateful events of the final moments, a lot more happens in this episode with the other characters as well. Daemon remains a formidable MVP as he simultaneously displays compassion and contempt as the two sides to his flawed personality. He’s there by Rhaenyra’s side when she needs to deal with the loss of her child, and yet he almost strangles her without hesitation when she interferes in his violent delights. He’s also willing to use force and unleash a bit of dragon-power to persuade others from joining by their side, unlike Rhaenyra who, at least until the last moment, wants to deal with the situation a lot more calmly.

We also get a tense confrontation between Otto and Daemon which, in an episode of callbacks, is reminiscent of a similar war of words that occurred in Episode 2. Ever the sleuth, Otto offers generous rewards comprising of riches and lands to swa any kings and queens into bending the knee before Aegon the Conqueror. He knows that won’t work with Rhaenyra so in addition to offering her control of the Targaryen stronghold Dragonstone, he reminds her of the friendship she and Alicent once shared by handing over an old page from a history book. By this point though, both Daemon and Rhaenyra are informed enough to see through Otto’s deceit and flat-out refuse the offer. While things don’t end in a conflict here, it doesn’t end well.

Unlike Game of the Thrones, an epic, big-scale battle has eluded us on House of the Dragon. This isn’t to say the duel of the dragons was anything short of spectacular. Metaphorically, it was the first true Dance of the Dragons and contained some fabulous framing of the two beasts. Specific callouts include Vhagar’s emergence in the shadows, when Lucerys realizes that Aemond has arrived before him, Vhagar circling Vermax from above and the final duel which, for a change, takes places above the clouds in clear, bring sunlight. As much as I love the bleak aesthetic and the gloomy foreshadowing that it provides, I’m all for huge sequences taking place in broad daylight so we can admire the intricacies of the dragons. Greg Yaitanes is definitely becoming the Miguel Sapochnik of this series in the way he handles these majestic sequences – he previously helmed Episode 3 that involved Daemon charging into the Crab Feeder. He’s certainly a name you should watch out for in future episodes and I’m hoping he sticks around.

I’m also interested in seeing just how motherly love tears the two women apart. On one hand is a woman who lost her son in what was most certainly an unnecessary act of violence, in a way that she perhaps may not even be able to cremate his final remains. This possibly further reinforces the significance of her losing her child: whatever state it came out it, Rhaenyra was at least able to give it a proper burial, which may not be possible with Luce. At the other end is a woman whose son committed a horrific act, but she’s got to believe him when he claims he didn’t mean it. She could attempt to blame it on Vhagar or play the penance angle by reminding Rhaenyra of how her son didn’t get the justice he deserved years back when Lucerys took his eye. Yet again, Martin has created a world where, despite the bizarre circumstances, both sides have equally valid points. And no matter how ridiculous one side may seem, the resolution won’t be as clear cut as it seems. Which is why there won’t be any.

House of the Dragon closes off what has been a promising first season by fully moving all its chess pieces into place for the wars to follow. And while the season may not have delivered an epic battle on the scale that its parent show its known for, it still shared many similarities tonally and structurally with Game of Thrones, including the fact that it suffered an episode leak when the finale leaked a few days before the official premiere. I fully expect Season 2 to be filled with a lot more warring, plotting and scheming, but on a larger scale more on the battlefield as opposed to the inter-family dynamics that Season 1 dealt with. The Season 1 finale sets up the ultimate conflict with a turn of events from which it’s impossible for the Targaryens to recover, the memories of which will haunt the dynasty for generations to come.