Political scheming abounds and Rhaenyra makes a splash entrance in a captivating episode.

Game of ThronesHBOHouse Of The DragonTV Show Reviews
By Divij Sonak On Aug 31, 2022 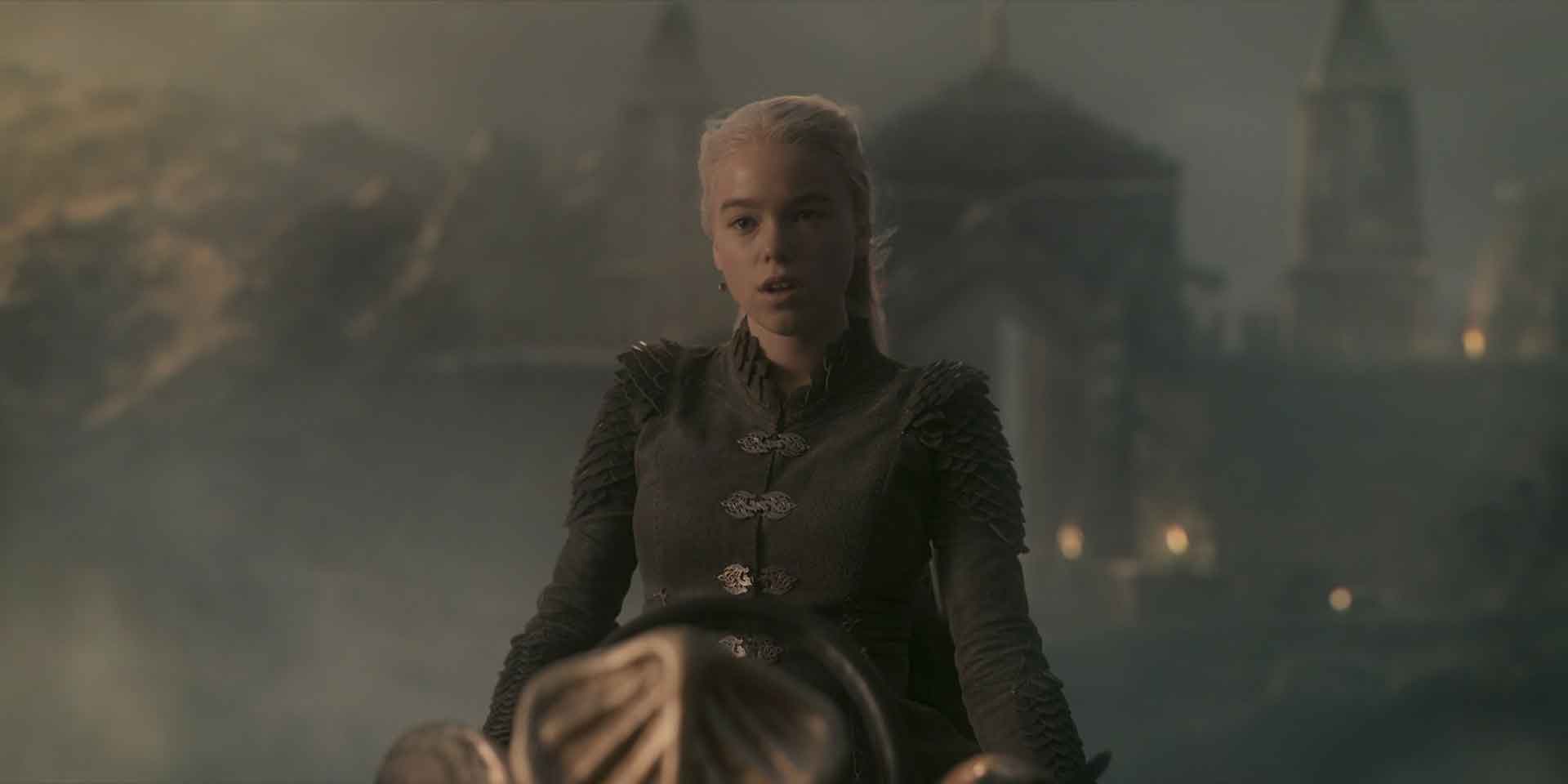 In an era of short attention spans, one of the biggest fears Westeros fans had was whether House of the Dragon would stick to the slow pacing of its humungously popular parent show, or ditch it for a more fast-paced telling of Targaryen history. We’re just two episodes in, but it’s becoming increasingly clear that showrunners Ryan Condal and Miguel Sapochnik are hitting just the right notes. The Rogue Prince contains a lot of the political scheming and forging of alliances that was at the heart of Game of Thrones. Throw in a splash entrance by the new Queen Rhaenyra and you almost have a winner.

With former Queen Aemma and her newborn son Baelon deceased during a particularly harrowing childbirth, the focus of this episode continues to lean towards Viserys’ succession. A universally floating thought is that Viserys should remarry with the possibility of birthing a heir. Naturally, powerful people want a shot at royalty and push their daughters to be wed to the King. This includes Corlys Velaryon, husband to Rhaenys, the Queen who never was as well as Otto Hightower who, as we learned from the first episode, nudges Alicent, also Rhaenyra’s best friend, to spend time with the King and alleviate his loneliness.

Viserys remains a largely noble king, and learns that it comes with a price. He has people around him manipulating him into forging an alliance with their respective houses, some doing it more overtly, others doing it subtly without a trace of recognition. Paddy Considine wonderfully depicts the king’s inner conflict, a struggle between his heart and mind as he shudders at the thought of marrying a 12-year old child while also realizing that, given the times they’re living in, it’s the most practical thing to do. His feelings are further complicated thanks to Alicent’s presence and Otto’s scheming. In a brilliant piece of acting, Rhys Ifans’ Otto successfully manages to sow seeds of doubt in the King’s mind at the thought of marrying a child by leveraging his own wife’s death and his inability to recover from it entirely. Ifans devilishly delivers the sly, smug look on Otto’s face that sells his lies, without going overboard.

Despite being the central conflict, it’s not the only one that plagues the King’s reign. Craghas Drahar, also known as the Crab Feeder, has been usurping ships at the Stepstones. The action calls for a stern response but the King wants to continue maintain peace and avoid an all-out war unless it’s absolutely necessary. Once again, Corlys and others goad the King into acting and sending a message, reasoning that sitting in the council and twiddling thumbs will be seen as weak. Viserys is yet again put in a conflicted position, with Considine once again rising to the occassion as he deftly portrays the inner turmoil. The challenges he faces provide a true sense into what such a rule entails and the kinds of decision-making one needs to wrestle with. Yet again, tight writing ensures that the conflicts are believable as opposed to being hamfisted and you’re able to see some reason into everyone’s choices.

Well, not everyone. Inexplicably, or rather irrationally, Daemon absconds to Dragonstone with a dragon egg, feeding a subplot in which Otto volunteers to retrieve it back. Dispatched with his army and almost on the verge of conflict, the whole confrontation between Otto and Daemon takes a different turn when Rhaenyra arrives on the scene, dragons blazing, making quite an entrance. She succeeds in talking Daemon out of his illogical reasoning, making him realize that he’s neither married, nor has a child, negating the need to steal the egg as tradition. It’s a strong moment for Rhaenyra who until now has been delegated to being the Council’s cupbearer, and showcases her potential of becoming a fiery, decisive and strategic Targaryen queen. It’s also the show’s highlight from a technical standpoint, with breathtaking cinematography depicting the Dragonstone in a layer of fog, a decision that arguably helps the VFX team conceal it better given that it was shot on a soundstage. Regardless, the dragons look every bit as magestic and its neat to see them even emote a bit and play off against Rhaenyra.

Patriarchy continues to be a rampant theme throughout the episode, as is evident in Rhaenyra’s rule. All the major houses may have bent the knee to her, but we soon realize it was all for nought as she’s barely involved in the decision-making at all. A good 6 months later, she’s still not well-versed with royal mannerisms and applies rationale over loyalty in taking calls. In one such scene when she’s choosing men to protect her father, Otto gently guides her on how to best respond to the shortlists. She later on, chooses Ser Criston Cole, who displayed great skill when he combated and bested Daemon last episode, over some of the other candidates from more prestigious houses, despite Otto’s nudging her to. She reasons that the most important thing in making this choice is the man’s ability to fight. It strikes a nice balance of providing us a glimpse into Rhaenyra’s simultaneous ineptitude and ingenuity in handling regal matters.

Rhaenys, of course, stares intently at the way Rhaenyra navigates the circus of men. Had Jahaerys nominated her over Viserys, she would have been making the calls. The two women have a heart-to-heart, with Rhaenys lashing out at the patriarchical ideologies that remain so deeply imbibed in all men that they would sacrifice the realm over letting a women ascend it. She understandably remains bitter at being sidelined for her gender even as Rhaenyra hopes to fend off the old-school thinking from decades and centuries ago and forge a new world order.

This is in stark contrast to the interaction between the other pair: Rhaenyra and Alicent. Alicent remains and interesting character if a bit unexplored; while she’s giving in to her father’s wishes and manipulating Viserys into developing an affection for her, she shows genuine care for both the King and her best friend even offering her a shoulder to cry on as Rhaenyra grieves her mother’s loss; shout out to Milly Alcock for a mesmerizing performance there, conveying so much through her eyes without resorting to histronics. This moment, coupled with the other scenes these two shared in the series premiere, contribute to our emphatiziing with the betrayal that Rhaenyra sense when her own father chooses her best friend Alicent as his bride-to-be. In that moment, Viserys does the right thing (or at least, as right as he could have done given the circumstances), but realizes that honor comes with a price as he alienates his own daughter, Corlys and probably half the council who had all advised him to marry the 12-year old Laena Velaryon instead. It’ll definitely drive a wedge between the two friends and their dynamic should take an intriguing turn in the episodes to follow.

At this point, House of the Dragon maintains its stunning production values, which I suspect would be redundant to tout in every review. What’s worth calling out though is Ramin Djawadi’s score, which sounds every bit Game of Thrones as he steadily works to introduce new themes. The score at Dragonstone was the highpoint alongside Rhaenyra’s splashy entrance, with a rumbling bass conveying a strength that adequately complimented the strength of the players in the scene. And how awesome was it to see the full-fledged House of the Dragon intro, using the exact same Game of Thrones theme score. I’ve certainly missed starting a GoT episode every week with that intro, and fans are going to devour the subtle hints that it may already carry, while keeping an eye out on how it changes week-to-week. Some may argue that Djawadi should have gone the Better Call Saul route and composed a new theme instead of reusing an iconic one. I’d side with the showrunners on this one: if it ain’t broke, why fix it?

The Rogue Prince carried on the political machinations, backstabbing, manipulation and scheming that’s all such a central part of Game of Thrones. It was slower in pace than the previous episode with far lesser consequences. But if the final scene and next episode’s trailer are any indication, awaiting plot points and significant developments on this prequel show isn’t going to be a slog. Overall, despite the dip in pace, House of the Dragon rides positively on its series premiere and at this rate, should quickly turn into one of the year’s strongest TV or streaming offerings.