The Targaryens squabble over succession as Daemon emerges reborn after a vicious battle.

Game of ThronesHBOHouse Of The DragonTV Show Reviews
By Divij Sonak On Sep 5, 2022 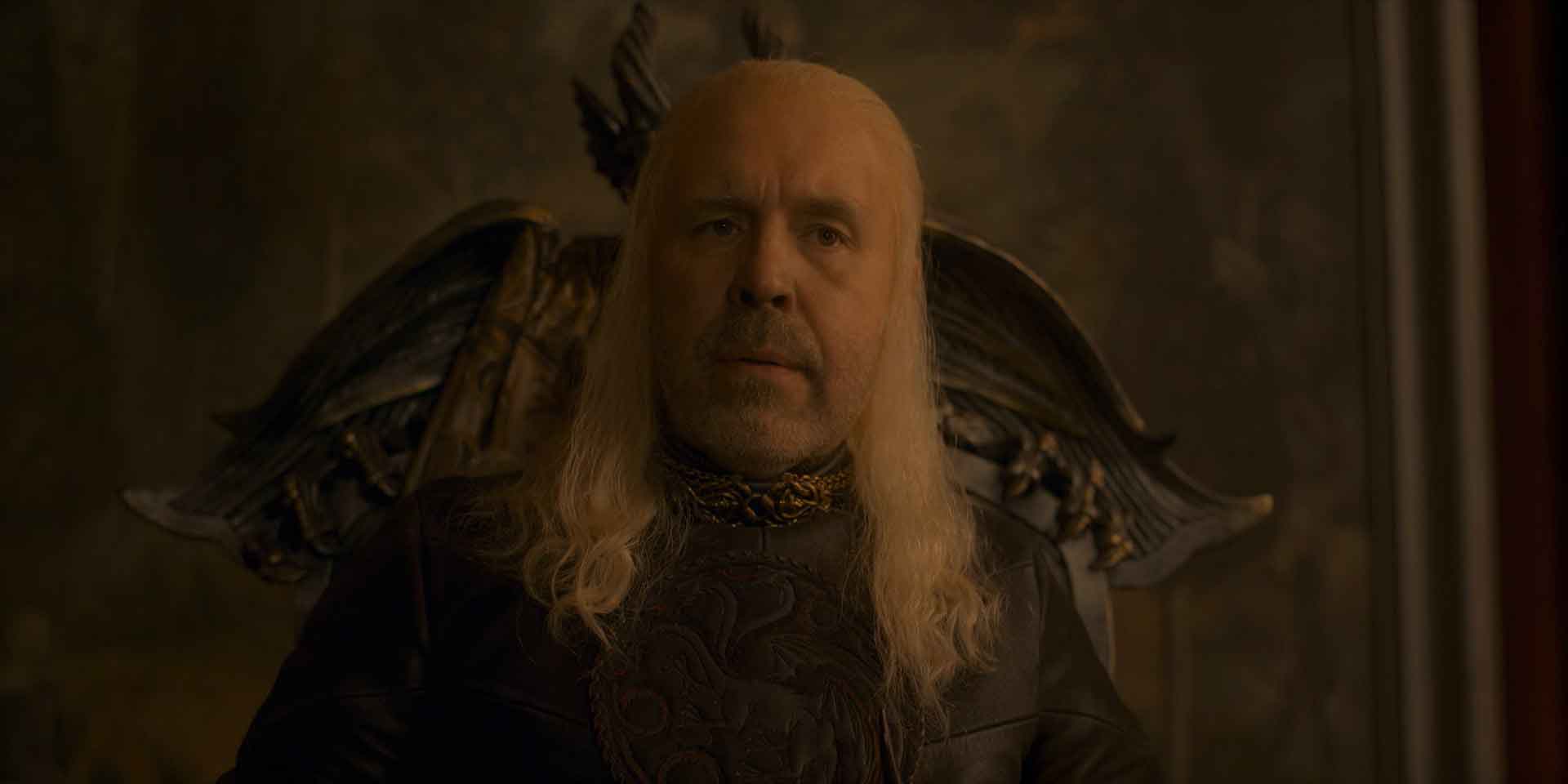 With a successful series behind it and the resulting increased budgets, there was no doubt House of the Dragon would deliver a major battle sequence much sooner than its parent show Game of Thrones did. I just didn’t expect it to be this soon enough. Daemon scores a brutal victory over The Crab Feeders with help of some plot armor coupled with a one-man army shehnanigans in an undeniably epic set-piece that closes off the episode in style. That doesn’t mean that the series has ditched its talky demeanor its fans have so grown to love; while dragons bookend the episode, it remains a lot more about how the arrival of baby Aegon, the titular Second of His Name, begins shifting the dynamics of who ought to be the rightful heir of the Iron Throne.

Showrunners Ryan Condal and (now ex) Miguel Sapochnik are intelligently using time-jumps in between episodes to cover what’s essentially a 100-year history of the Targaryen family. This of course robs us of some of the impact of previous episode closures. Not picking up plot threads or cliffhangers directly means we don’t get to see the immediate aftermath of Viserys’ announcement of wedding Alicent, his daughter’s best friend, and how it impacts their relationship, resulting in their fallout: we simply see the fallout and fill in the gaps. Having said that, every episode does seem to carry enough meat to not make us miss those moments desperately, as thrilling as they may have been to witness.

The use of inter-episode time jumps as a plot device means the show devotes some time to construct conversations that help fill in the gaps. A gathering of old ladies at Aegon’s naming ceremony catches us up on the state of the war in the Stepstones; turns out Daemon’s arrival, dragons blazing didn’t end the war but prolonged it for a good 3 years. Alicent and Rhaenyra have grown distant. Viserys is seemingly pleased at the prospect of having his own son but frequently finds himself torn between his duties and responsibilities as a king and doing the right thing, which is something he’d arguably prefer to do. The weight of ruling the Seven Kingdoms begins to wear on him and fuels his constant angst that we see for much of the episode.

Viserys is unarguably the center-piece of this episode. In the 3 years that have passed since his sane yet controversial decision to wed Alicent, his rule and his state of mind have become fragile. He’s a lot more prone to lashing out uncontrollably and drowns himself in wine at his son’s naming ceremony. Paddy Considine does a remarkable job of adding depth to Viserys in bringing out his inner conflict; the constant self-doubt that he deals with over his decision of naming Rhaenyra the heir. His stance on staying away from war has resulted in pleas from the Stepstones being ignored, which in turn has painted his rule as weak. So weak that he struggles to kill a chained, brown stag on the first go, let alone having to hunt for one.

Viserys is not the only frustrated Targaryen. Rhaenyra finds herself constantly trapped. Having come of age now, she’s flustered that all her father and other men can think of her is marriage. In the conquest of kingdoms, she’s only viewed as a childbearer, her matrimony a doorway into a stronger alliance. Milly Alcock shines in Rhaenyra’s quiter moments as dealing with the weight of being a handicapped Queen, with men of all sorts trying to swoon her over, often with dimwitted charm such as Jason Lannister of Casterly Rock. Everyone has a suggestion for whom she should wed and Otto’s proposal of inbreeding with the 3-year old Aegon is the grossest of them all. Rhaenyra storms off in a fit of anger and only the posed Ser Criston Cole rushes to her rescue and manages to bring her back, the duo even fend off a boar attack that’s a nice callback to Game of Thrones. Based on their crackling chemistry and his honorable reputation, I’d love to see Criston and Rhaenyra end up together, or at least have more adventures in some capacity.

Director Greg Yaitanes employs a lot of symbolism to contrast conflicting characters. Clumsy CGI aside, the stags is an obvious one. The presence of a brown stag is perhaps a hint that Aegon is not meant to be the rightful ruler. A white one shows up in front of Rhaenyra instead, but rather then killing it as is the tradition, she lets it live. Is it a bad omen overall for House Targaryen? Or does it reinforce Rhaenyra’s place as the true rightful heir? Another interesting parallel is in how the father-daughter duo kill. Viserys is drained at the mere thought of having to kill for tradition. Rhaenyra on the other hand stabs the boar in a flurry of rage and fear. Guess the Targaryens can be both compassionate and cold at the same time.

The last 20 minutes are devoted to closing out the stand-off with Craghas Drahar, whose men have chosen to retreat inside caves to save themselves from being burned in dragonfire. Daemon has held off against all odds, despite a Velaryon or two beginning to question his sanity. For Daemon of course, this whole seige is a power-play – his best shot at proving that he has real battle experience, that he’s a stronger king than Viserys and is capable of resolving conflicts on his own. Which is why when the king returns their call for help, it angers him no end. There goes his only shot at claiming his own victory, for once the king’s aid arrives, Viserys will claim all credit for driving Drahar away. Fueled by rage then, he barges on towards the Crab Feeder and backstabs him by appearing to surrender, before calling upon Velaryon’s dragon Seasnake to torch them all.

To question or point flaws at the staging of this sequence would be insulting a game which by now, HBO and team have mastered. I’ll admit, while the battle did not incite the kind of nail-biting tension that other later-season battles in Game of Thrones have, it’s only fair given how early it comes in the show. It’s filled with epic visuals, whether it’s right in the thick of the action as Seasmoke lighting the Crab Feeders on fire or just an establishing shot giving us a sense of scale and geography, laying out where all the players are positioned. Djawadi’s score slowly begins coming on his own as well, finally climbing from the shadows of that ever-so-irreplaceable opening intro. There’s a visceral power to seeing Daemon charge up to Drahar, dodging hundreds of arrows, and seeing him emerge drenched in blood with a disintegrated Drahar, intestines sprayed on the ground. Magnificent.

Between the scheming, forging of marital alliances, and the internal Targaryen familial conflict for the Iron Throne and the sweeping raid of the Stepsones ending in epic gory, House of the Dragon has managed to do what was once considered an impossible feat: giving fans more Game of Thrones by preserving the best parts of the show that fans adored. It remains well plotted, passionately directed and lays the groundwork for some potentially interesting conflicts to come. Sure, the writing could be sharper, especially the dialogues and Daemon’s plot armor definitely divested some of my stakes in the battle but I guess this was never about us choosing between two sides as much as it was about seeing one side gain the upper hand. I just hope future battles remain as complex as the Targaryen dynasties battling it out for the Iron Throne.