House of the Dragon Season 1 Episode 8 Review: The Lord of the Tides

Family reunions abound amidst familial backstabbings as a major character gets a poignant farewell. 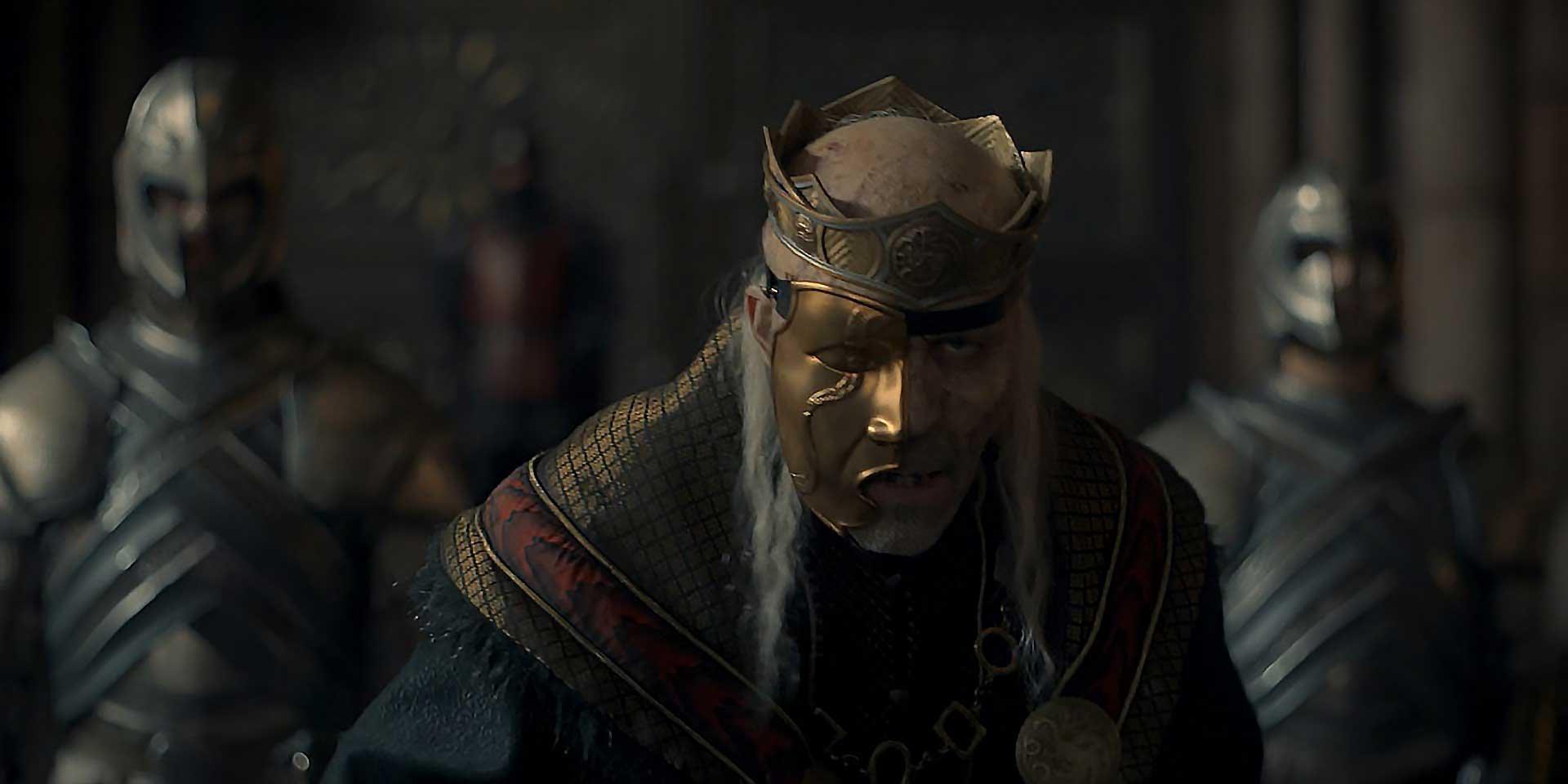 Unlike Game of Thrones, we haven’t really had any major character departures in House of the Dragon. Aside from Milly Alcock and Emily Carey aging into their adult selves, most of the prominent characters that we started off with in the pilot episode have been with us. That changes this week as we embrace what appears to be a permanent loss of the show’s first major character. It follows then that the bulk of the episode revolves around dealing with it including its potential effects on people around him and his last-ditch efforts to reunite his family in the face of insurmountable odds than he knows lie ahead.

In true House of the Dragon fashion, it’s the question of succession accompanied by a generous time jump that kicks off the proceedings. With the Sea Snake being gone for 6 years and Viserys growing weak, his brother emerges from the shadows to stake a claim to the Throne. He argues that Rhaenyra’s children do not carry legitimate Velaryon blood and are therefore unsuitable to sit on the Iron Throne. Queen Alicent Hightower invites Rhaenyra to King’s Landing to defend her heirs, which brings back old memories and wounds alive. Seeing his entire family under one roof, Viserys makes a one last plea for them to unite, knowing very well that his own days are numbered.

Paddy Considine steals the episode without a doubt, partaking in several of its showstopping moments. The first of these occurs when, after months or years of Otto Hightower presiding over the throne room’s proceedings, Viserys decides to make an appearance to quell any confusions and lay doubts about rightful succession to rest. At this point, the condition inflicting Viserys has fully consumed him, his body a skeletal shell of his glory days, half his face and flesh fallen off to reveal his internals. Considine embodies not only the emotional trauma of living in that state but also pulls off the physicality of his condition’s weakness exceedingly well.

Ergo, the sequence in which Viserys appears in the throne room and the long walk punctuated by commiserating stares is simultaneously powerful yet poignant, a gruesome reminder of how even the King himself is a slave to his own bodily limitations. Director Geeta Vasant Patel lets the walk play out longer than usual, allowing us to see what the throne room participants see: a king in his final days of glory, strutting himself with pride and honor, refusing any bystander assistance until of all people, Daemon comes to his aid. The resulting drama that follows is equally gripping and provides House of the Dragon with a shocking, out of the blue death when Vaemond Velaryon accuses Rhaenyra’s children of illegitimacy and casts doubt on her character right in front of the audience. Without any remorse or reservation, Daemon decapitates him with a snarky remark. You can tell his desperation when he slyly egged Vaemond to say it out loud; Daemon had already made up his mind and simply needed a strong-enough reason to go ahead with the kill.

The second meaty sequence occurs in a possibly final, impeccably shot family dinner. Viserys pleads with his family to bury the hatchet and call off their differences, considering the immeasurable threat that lies ahead of them, a threat that only Rhaenyra is aware of at that point. It seems to work as well with the folks that matter the most. Rhaenyra raises, what appears to be, a genuine, heartwarming toast of gratitude to Alicent for taking care of her father. Alicent on her part, reminisces about her friendship with Rhaenyra, and it almost sounds like amends are made. It doesn’t last long though, given that the children have their own grudges that play out as one-eyed Aemond is triggered by a pig that reminds him of the pranks his cousins used to play on him. In return, he calls them “Strong” boys, alluding to their illegitimacy, before Daemon’s presence calms off a potential quarrel. Regardless, you can still tell Alicent and Rhaenyra are now warmer than ever with each other as the former nudges her best friend to stay, while the latter promises to return after dropping off their children.

The sequence is a hallmark of superior production values and technical competence. Geeta Patel again shines by letting the sequence play out with exceeding comfort, instead of rushing it through. Djawadi’s cellos instill a sense of pain and loss, effectively selling the notion that things will never be the same after this last Targaryen family meal. The production design itself lends a rather ethereal vibe to the setup, echoing a medieval family gathering. Cinematographer Catherine Goldschmidt’s framing choices make it almost reminiscent of The Last Supper while also ensuring that every actor receives the right coverage, without being left out. It’s unlike the large-scale battles that some fans may be clamoring for but this quiet bit of solitude should cement the show’s stature as the right kind of Game of Thrones that hardcore fans really wanted.

Every actor by this point stands completely immersed into their Targaryen characters. The dinner scene is a tapestry of great performances, not just from the adults but also the children. Considine yet again steals the show with his earnest pleas for peace and seeing the family as it was in his glory days. He balances the emotional and physical aspects of his condition seamlessly, as he did throughout the episode. Several bits of Considine lying in bed are equally heartwarming, such as the one when he meets Rhaenyra and sees his grandchildren, which also leads to them discussing the prophecy that Considine once cautioned Rhaenyra about.

Of course, the show wouldn’t live up to its reputation if things patched up so quickly. Which is what the final moments are for. In his dying state, Viserys mumbles bits and pieces about the prophecy to Alicent, assuming her to be Rhaenyra by her bedside. It’s ironic that Viserys at this point pretty much physically resembles the very threat about a Song of Ice and Fire he’s trying to warn Rhaenyra about. He tries reminding her that Aegon the Conqueror will be crucial in slaying the upcoming threat, which Alicent misinterprets as his last wish wanting Aegon to be King. Whether she acts on it given that Viserys already named his heir in public remains to be seen and could likely be instrumental in splitting the family apart.

The Lord of the Tides remains yet another solid episode, offering the inter-family intrigue, political scheming and plotting that has become a staple of House of the Dragon. Paddy Considine delivers an Emmy worthy act, portraying the final, decaying moments of a King on his physical decline, but one who hasn’t lost his will to rule or see his family together. With Viserys gone though, the peace holding the realm remains in peril and the chances of the Targaryen conflict escalating to a full-blown war just shot up enormously.