Targaryens scramble to fill in the void left by the king’s departure.

Game of ThronesHBOHouse Of The DragonTV Show Reviews
By Divij Sonak On Oct 23, 2022 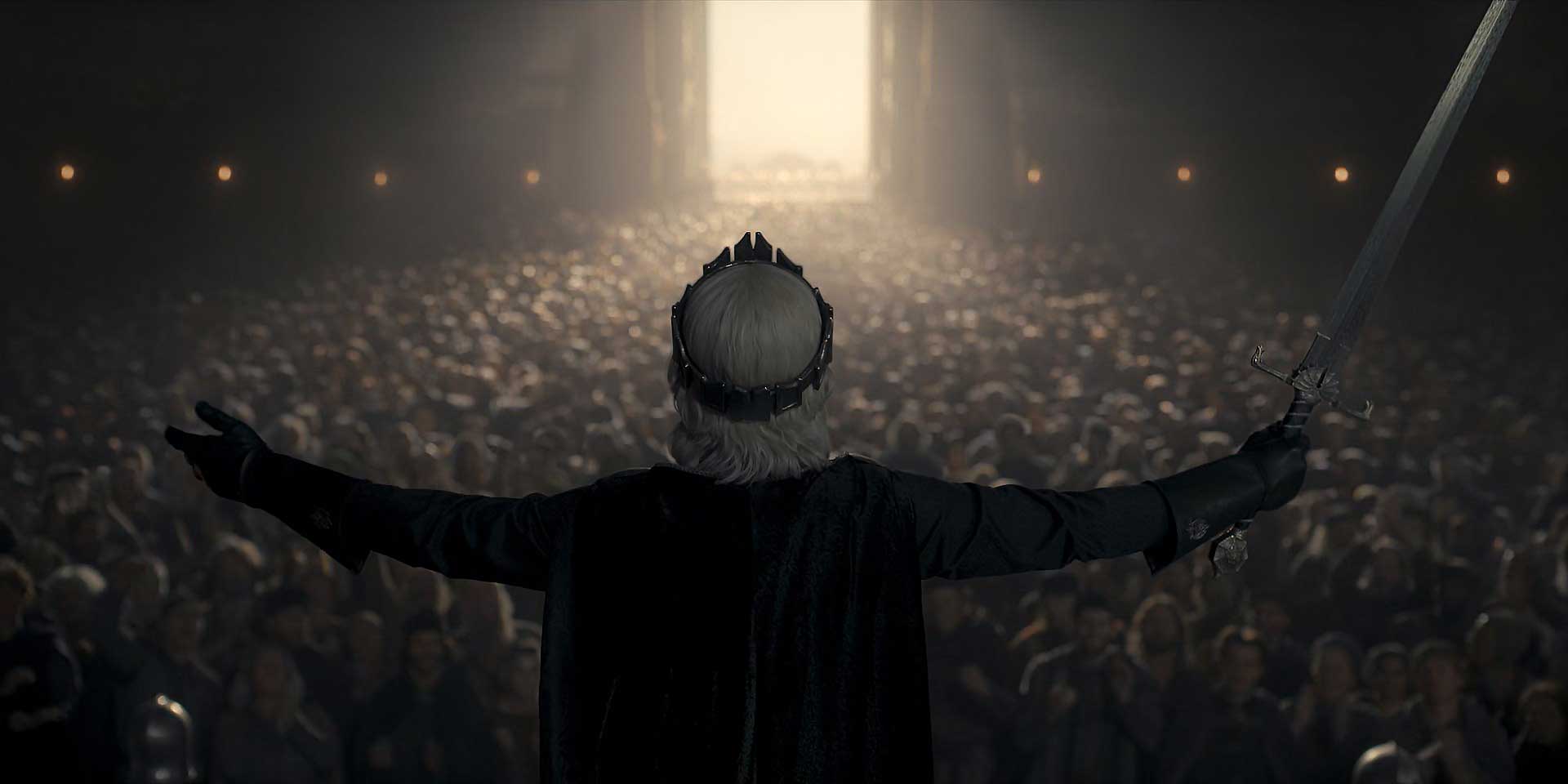 Episode 9 on Game of Thrones had cultivated the reputation for delivering shocking moments, jaw-dropping plot developments or large-scale battles, ostensibly becoming known for serving as the season’s real climax, with the finale mostly wrapping up things and setting up the next season. House of the Dragon is clearly not there yet as its penultimate episode really manages to deliver neither. What it does deliver though is intriguing developments to hurtle the wheel further towards the inevitable Dance of the Dragons that will eventually tear the Targaryens apart. And it achieves all of this without compromising on its integrity while actually giving us a spectacle-laden moment at the very least along with an enthralling original composition from the iconic Ramin Djawadi.

For a change, we don’t get a time jump. Instead, House of the Dragon carries on the previous episode’s timeframe as Alicent misinterprets Viserys’ last words as his desire to see Aegon crowned king. To Alicent’s own surprise and horror, his father Otto had been scheming and planning this succession anyway with other council members – The Green Council. The treachery and treason in the works leads to some tense confrontations including Lord Beesbury’s death at the hands of Cristan Cole and Lord Commander Harrold’s resignation, with Cole taking his place. A manhunt then ensues to find the absconding Aegon Targaryen with the Cargyll twins dispatched by Otto one one side with Cole and Aemond sent by Alicent, both wanting Aegon to be brought to them.

We get to see several interesting character beats and shades in the pursuit of Aegon. Erryk’s dejection on seeing children fight it off for adult entertainment, including royal bastards abandoned by their fathers moves him to shift allegiances. Cole has come far from the days he was a noble knight allied with Princess Rhaenyra; his exploits have hardened him to no end. And where Aegon cannot carry the burden of royalty, the other son Aemond yearns for it, even suggesting at one point that they abandon the search for Aegon so he can take his place as the rightful heir to the Iron Throne, seeing that he’s next in line anyway. For some inexplicable reason, he looks more Aegon that Aegon himself.

Meanwhile, for all her misdeeds such as covering up for her son’s exploits, Alicent exhibits a kind heart in general. She vehemently opposes an attempt on Rhaenyra’s life, demanding that she be spared of murder in their quest to usurp the throne. She genuinely believes in fulfilling the dying wish of her husband Viserys and getting all the houses to ally with them without harboring any ill will. And she tries persuading Rhaenys to join her side by appealing to her desires to rule and getting her to revisit her past and see how she has been wronged all this while. By this time, Rhaenys is well over the injustice that was inflicted on her when she was passed on the throne, and is touted as the show’s most logical character. She on her part, retorts back to Alicent, inquiring why she’s been subservient to patriarchy all this while when she could have the Iron Throne for herself and have a shot at bringing about some impactful change. It’s a powerful conversation, competently helmed by director Clare Kilner who allows both Olivia Cooke and Eve Best to shine through and through.

Of course Aegon is eventually found, but not without a few allegiances and bribes in place. The climactic ceremony involving his coronation does deliver on a different sort of spectacle as a crowd full of masses heads towards the Dragonpit to witness the event live. It carries the palpable tension and anxiety that Game of Thrones delivered so well in that despite being a relatively straightforward set of proceedings, it leaves viewers anxious about anticipating what’s next. The change in Aegon’s demeanor is also fascinating to behold as he goes from being completely against the idea of ruling to at least considering the possibility to celebrating with the masses. It’s a neat harbinger of what power does to you: it corrupts, molds and influences even those least interested in it. In this case, Aegon gets his taste of what true power feels like when the crowd soars every time he raises his sword.

Unbeknownst to us all, Rhaenys emerges from underneath the Dragonpit with her dragon Meleys, leaving behind several casualties in her wake. She has a clean shot at preventing the Dance of the Dragons from ever happening by slaying half the Targaryen family right there. Needless to say, she chooses against it and rides away instead: HBO needs more seasons of this family drama. I’d like to believe her previous conversation with Alicent helped Rhaenys see her as a woman of substance. That, coupled with her motherly love as she protects Aegon from being burnt to toast probably dissuades Rhaenys from going ahead with the dastardly act. It’s also likely she isn’t fully allied with any side at this point and prefers staying out of the conflict until she’s sorted out where her loyalties lie.

The sequence is far from the level of spectacle we’re used to Thrones delivering, but Meleys sitting on the Dragonpit definitely feels majestic. As do the streams of crowds that march towards the pit, a lot of which includes real people impeccable and logistically managed, but a lot of which is also inevitable CGI crowd duplication at play. Still, it helps sell the notion that there are a lot of people living in King’s Landing so when a dragon emerges, you’re always concerned for their safety. The lead-up to the coronation almost evokes a Winds of Winter like build-up, Djawadi coming up with yet another original melancholy that flows well as the montage of sequences cut together for the crucial reveal. All of it may seem a bit underwhelming to fans anticipating earth-shattering developments, but it remains great, entertaining television regardless.

On the whole, The Green Council serves well to shift the tides and show us the Hightower-Targaryen side of the reaction to the death of Viserys. Given that Rhaenyra and Daemon were entirely absent from the episode, I suspect they’re going to feature heavily in the finale as we learn of their reaction to the news and the subsequent betrayal at the hands of Otto, if at all they know about it. The moves have already been made though and it’s unlikely that with Viserys gone, things are ever going back to the way they were.

House of the Dragon Season 1 Episode 8 Review: The Lord of the Tides