The Lost SymbolTV Show Reviews
By Divij Sonak On Jan 5, 2022 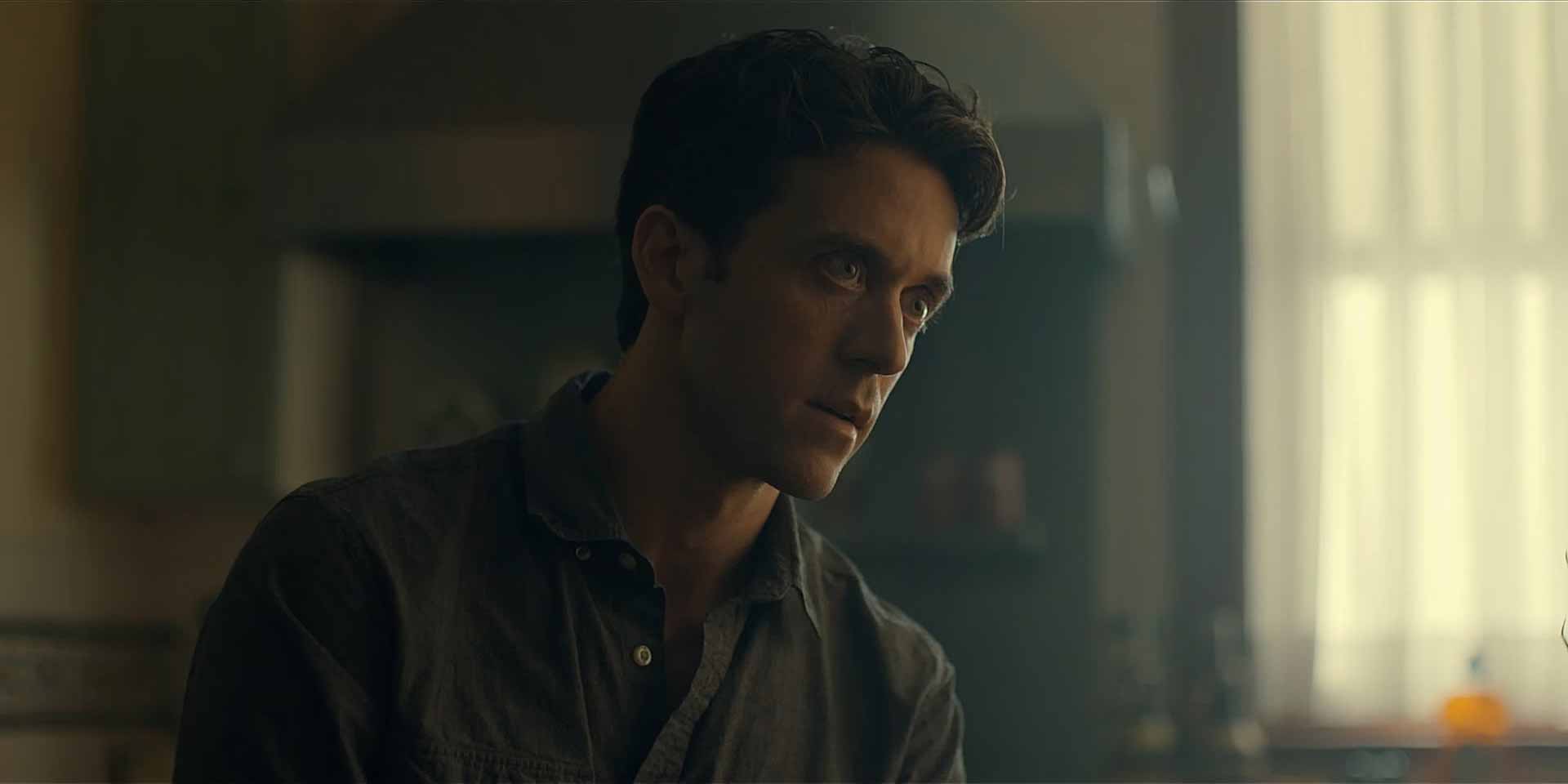 After a wild goose chase involving uncovering multiple riddles, Langdon may have finally found the Capstone. Katherine meanwhile, tries to use the power of noetic science to trace her father’s whereabouts to a dismal realization. Sato tries to get closer to Katherine in a bid to play a wild card should the time comes. And Mal’akh comes one step closer to achieving his goals.

Katherine and Langdon deal with the aftermath of the previous episode where Katherine’s lab assistant is found dead. The sequence has some oddly inadequate editing in that it refuses to focus on Valorie Curry’s reactions. Instead, as Katherine grieves the loss of her friend, the camera cuts to Langdon or Nunez or to a distant shot of Valorie every time, only focusing on her when she’s done reciting the bulk of the emotional dialogues. The sequence sets the stage for the rest of the episode as the three characters decide to split and go their own separate ways for the next hour or so – Katherine in search of her father, Langdon hunting for the Capstone and Nunez going after the man who shot him.

I was really intrigued by the film stock puzzle that needs to be solved before Langdon sets off on his own mission. Watching the mysterious footage of a Mason seemingly commanding a flock of birds to commit mass suicide burned the film footage but Langdon is hell bent on examining it closely for any clues to its editing. Ever the pragmatic person, Langdon finds it hard to believe in a higher power and is convinced that there’s some trickery going on behind the scenes. What he finds instead are some symbols inscribed on a film reel, one of which, a circle, contains a full riddle engraved within it. I wonder what kind of typographic devices existed in the 80s to print something this tiny and microscopic on film stock.

Langdon’s pragmatism is highlighted yet again towards the final moments as he recounts an incident from his childhood in a conversation with Peter where he may have experienced a higher power or energy he could not explain. He calls upon it again when making the leap across a cliff. Writer Felix Alcala and director Sallie Patrick do a competent job of spotlighting Langdon’s nonchalant attitude towards divine beliefs and powers, which he shrugs off. But it’s just that – competent. There are a lot more interesting talks that could be had, and topics that could be delved into, should the writers pit Langdon and Katherine in a room arguing about science and religion. Given how solid Langdon’s character is in Brown’s books and Zuckerman’s performance is in the show, a whole episode could be mined out of this interaction, but we never dive all in.

Katherine makes efforts to trace her father, which includes returning back to her house and establishing contact with an old ally whose help she could use to sense her father. In this universe’s noetic science abilities, it’s possible for one individual to connect with and sense another, which is what is used to get a sense of Peter Solomon. Unfortunately, it results in bad news when Peter appears dead just as he’s midway, going through his birth-death-rebirth cycle, the process that Mal’akh has so keenly been awaiting. For what exactly though, remains muddled and unclear. Nunez has a smaller part this episode where he tries to confront the person who shot him and only ends up speaking with his wife instead.

The Lost Symbol continues to be plot oriented as before although we get some nice bits of character development as we revisit both Langdon’s and Katherine’s childhood, highlighting their fears and curiosity. We also get our usual doze of puzzle solving as Langdon ingeniously cracks the riddel with Bellamy’s help, tracing it back to some artifacts of an architect. Funnily enough, I’m surprised it took them so long to figure out that the time frozen on clocks resemble GPS coordinates; I cracked that much before, probably the result of watching too many movies. And the final Capstone reveal was interesting, if a bit underwhelming than both the earlier riddles. That said, the leads frequently just figuring out the core piece at the last minute tends to get a bit exasperating. I sensed this the most when Katherine figured out that the drawings mirrored her father’s artifact at just the last moment.

I haven’t been leaning too much into exploring the show’s technicalities but boy this episode did have some poor VFX work or some shots that look utterly fake. Cases in point being Katherine’s flashback as a child with her father – the entire background looked composited and Peter’s makeup appeared horrible. Similarly, a wide shot of Langdon dangling from the cliff looked obviously fake, shattering the illusion that it’s a real location and not a CGI extended set. The cinematography and score too are nothing special to talk home about and the choice of camera angles appears mostly lifeless.

That in fact, is the core issue with the series. It’s well produced, well acted, decently directed, but appears soulless for some inexplicable reason. Unlike the riddles Langdon cracks, the individual pieces don’t quite mesh as well as they do in some other properties and The Lost Symbol never quite finds its own voice as a result. That said, it’s far from atrocious and I suspect it will continue to remain so, unless they somehow manage to botch up the ending entirely. For now, it’s perfectly passable and entirely watchable entertainment.