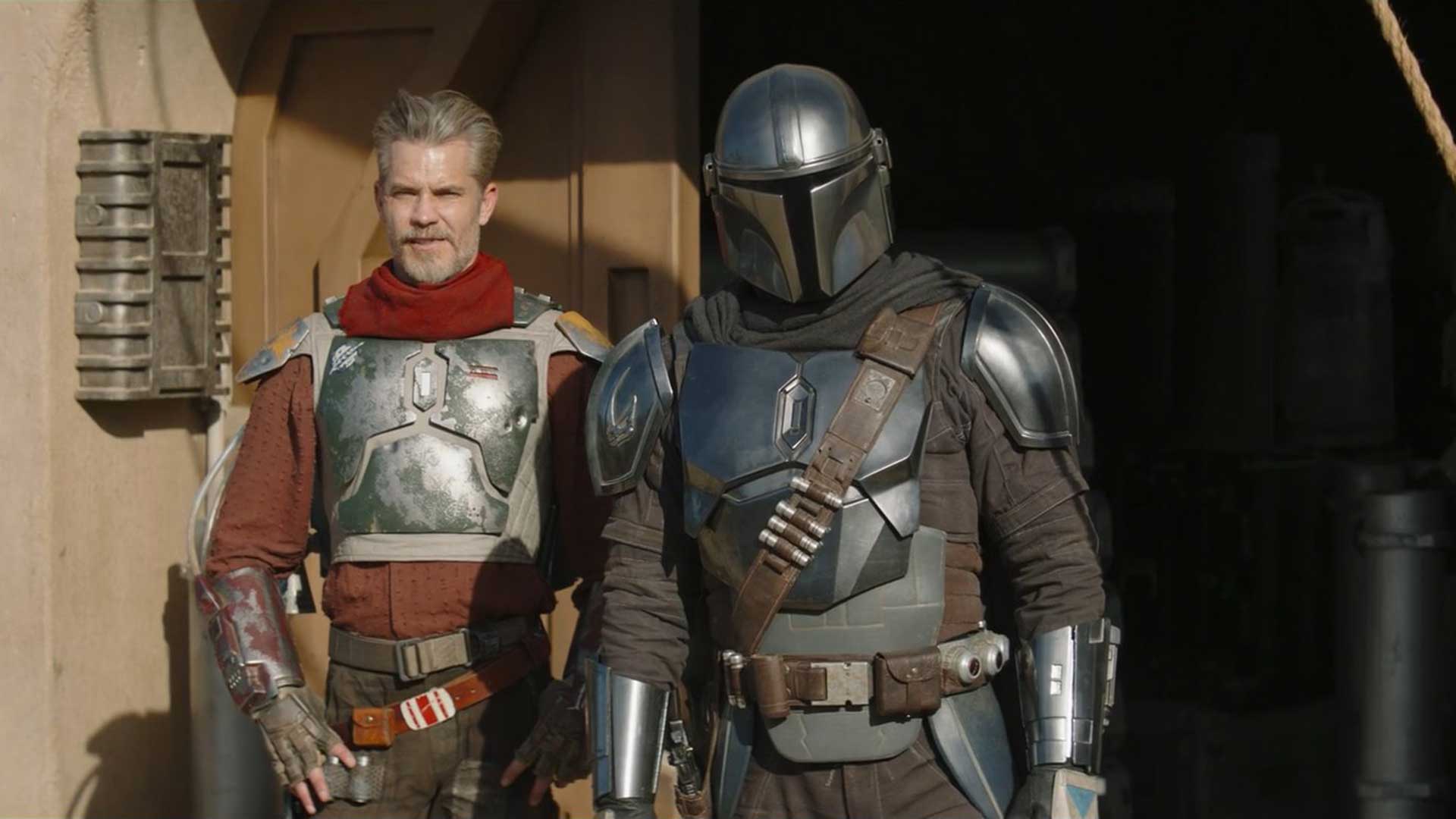 The Mandalorian Season 2 arrived with a phenomenally epic premiere that manages to be hugely entertaining despite treading old storytelling ground. Admittedly, it appears director-writer-showrunner Jon Favreau wants to play it safe as fans return to the sophomore season of the unanimously well-received live-action Star Wars property in some time and chooses to regurgiate some of the less favorable narrative aspects of its debut season. But the resulting execution is nothing short of thrilling and manages to meet and in some cases, surpass a sequel trilogy Star Wars film. In the process, we also receive the longest episode of the series by far.

Din Djarin or Mando gets one hell of a cool intro as he begins his quest to reunite “The Child” with his kind. To kick things off, he meets criminal war lord Gor Koresh to determine the whereabouts of other Mandalorians. As we learned in the Season 1 finale, and as the helpful Season 1 recap that opens the episode so gently reminds us, Mando’s best bet in locating the baby’s home is other Mandos. Naturally, a double-cross ensues as Gor wants Mando’s premium beskar armor but Mando fends them off, then leaves Gor to the dogs and walks away as Ludwig Gorranson’s score plays in the background to the opening titles. It’s a by-the-numbers sequence and Favreau plays it as such, knowing fully well it’s futile to even give The Mandalorian any illusion of being in danger. Fabulous.

Now for those of you double-checking the date, wondering whether I’m high, that’s a nope. Yes, I’m late to watching The Mandalorian and yes, it’s only now that I’m catching up with the show but in the spirit of its weekly releases, I’m trying to take in one episode at a time without spoiling myself to any reveals from future episodes, as hard as it may be. So as you read through my perplexed reactions, believe that yes, I’ve managed to stay mostly unspoiled thus far and am taking each episode as it comes.

Mando then visits the planet that’s his best bet of finding other Mandos: Tattooine. It’s a Star Wars fan’s dream to revisit the famed planet and this recreation looks painstakingly close to the original trilogy. So much that you’d be forgiven into believing that the scenes here were shot in 1977. Aesthetically, this is probably the closest we’ve felt to the original movie. Mando ends up on Mos Pelgo where he finds the town marshal Cobb Vantha, in a Mandalorian armor. After a tense stand-off, they agree to strike a deal when a Krayt Dragon whizzes by devouring a bantha along the way: Mando helps the town get rid of th creature in exchange for the armor. This will require them to team up with the Tuskan Invaders, with whom the villagers don’t had a good history, and work together to unleash the beast and trap him with explosives.

After a few hints of the storyline progressing in new directions, The Mandalorian quickly devolves into a monster-of-the-week standalone episode with its own self-contained story. A lot has been said about this format and I believe as much as fans want to see the Star Wars lore expanded, this really is going to be the direction the series could be sticking to. It curtails narrative opportunities but the format is still rife with world-building possibilities. And it frees up the creative team to come up with their own genre-stories for the week without being too bogged down by the overarching narrative. I concur with the general sentiment that it’s far more exciting to see the main story moving forward so I’m still hopeful that subsequent episodes will avoid repeating Season 1’s pitfall. In essence though, it definitely feels like Disney is going the MCU route with this one in laying the breadcrumbs of an overarching story while creating material rife for spin-offs. Given the showrunner, that’s not a surprise.

As conventional as they may be, there are definitely plenty of good bits around. The stand-off between Mando and Cobb is straight out of a western. The Krayt Dragon is massive and gigantic as it should be and clearly carries influences of Dune sandworms, now visibly more so for me after Villeneuve’s movie. Cobb gets a moment to narrate his own backstory, how he escaped his town at the end of Return of the Jedi, traded his crystals for Mandalorian armor and used it to shoo the invaders away. And all of this, as the two speed along the desert in pods, very much echoing hints of The Phantom Menace. No prizes for guessing whose armor that is; I’m anyway late to the party.

Favreau has a knack for bringing things together in an entertaining package and this episode yet again, displays that to the zenith. The entire climactic battle with the Krayt Dragon is impeccably choreographed as Favreau gives us a taste of Dune, Game of Thrones and Clash of the Titans all rolled into one, the spectacular wide-panning shots almost resembling a kaiju movie. Mando and Cobb fly around the beast like Iron Man. And yet, the sequence is blocked extremely well, making it easy to follow, thereby heightening the stakes. You’re left wanting a little bit plot wise; it’s a good idea to let the natives work together with the Tuscans but Mando pretty much does nothing but stand on the outskirts for the first half of the battle. I was about to wonder why they even needed him to fend off the Dragon until things started going wrong.

I know it’s hard to put that into consideration given the massive budgets Disney+ is giving these shows but technically, the show’s production values are an astounding feat. They rival the movies in every way, be it Baz Idoine’s cinematography or Adam Gertsel’s tight editing. The visual effects look flawless on the small screen and I’d happily pay to watch the show in an IMAX theater some day. And Ludwig Gorranson’s score is memorably addictive, which is why I’m delighted that Favreau decided to overuse it for the premiere. The connections and easter eggs to Lucas’ world abound – be it the Jawas, R5-D4, the pods, Tattooine’s dual suns, or Temuera Morrison’s Boba Fett resurfacing at the end (thats really hard to keep a secret by now), this is quintessential Star Wars through and through. There’s even a homage to Iron Man when Cobb fires a weapon at the last of the fleeing invaders.

I felt it’s just the seamless way how everything came together that made this episode such a huge win for me. In terms of novelty, it likely didn’t offer anything new, except maybe yet again, pushing the boundaries of just what’s possible in terms of a TV Show’s scope. But in terms of being fun and entertaining, The Marshal wins big time for me. The Mandalorian is like that irresistible pizza you just know you want to have, and with Chapter 9, Favreau just served us a sumptous meal. Thoroughly enjoyable.

The Mandalorian Season 2 Episode 1 Rating: 9 out of 10