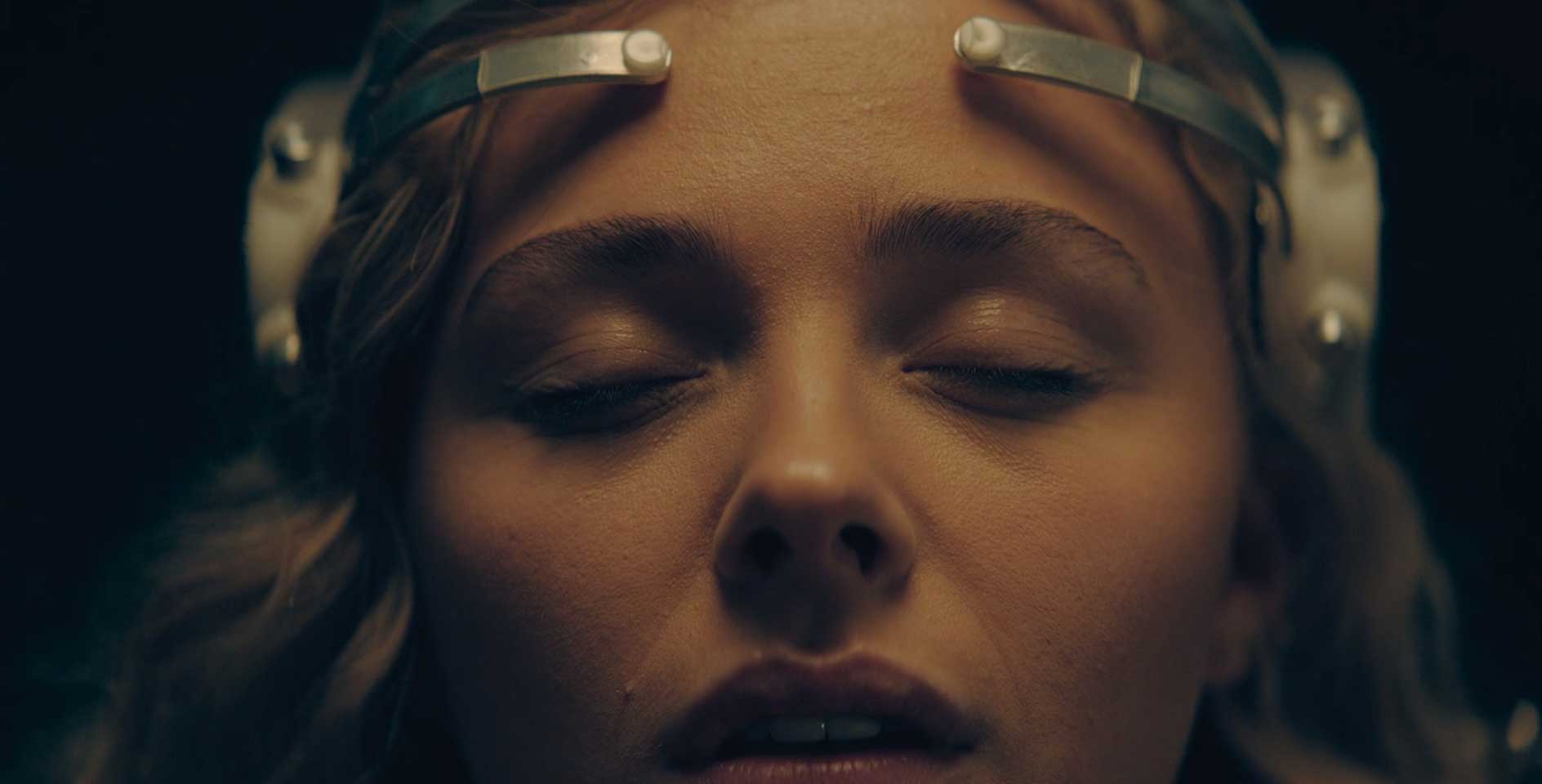 Science-fiction in entertainment has traditionally dealt with some outlandish concepts, presenting them in increasingly grounded ways. And off late, this thriving genre is attempting to strike just the right balance between plausible reality and pipe dream. Both Jonathan Nolan and Lisa Joy have become synonymous with sci-fi thanks to their recent stints with Person of Interest and Westworld, with a new Fallout show on the horizon. The Peripheral certainly benefits from having them lend their names as executive producers, despite their questionable involvement in the show’s mechanics.

With their ever dwindling attention spans, audiences are tough to please as far as new IPs go. And while The Peripheral is based on William Gibson’s namesake novel from 2014, it’s still a tricky proposition for showrunners to introduce such heavy concepts to viewers, many of which (like myself) may not have read the source material. In that regard, The Peripheral strikes a nice balance between offering enough intrigue to keep viewers glued without resorting to over-the-top exposition, all while grounding its proceedings by giving us a glimpse in the life of the show’s central character.

Flynne Fisher, played exhuberantly by actress Chloë Grace Moretz, represents our classic underdog who will undoubtedly be either destined for great things or get sucked into a conspiracy against her wishes. With her father passed away, she finds herself living in a small town, confined to taking care of her blind mother, while also exhibiting enough gaming skills to take over his brother Burton’s game plays to level him up enough or earn them enough cash to sustain a livelihood (yep, apparently gaming pays in this world in some form). She works in a decorator shop and harbors a longstanding crush on town sheriff / cop Tommy who is set to be married soon. She certainly carries the spark that convinces us she’s looking for more out of life, until an opportunity comes knocking at the door when a Columbian corporation sends over a prototype tech for Burton to test out because he excelled at the more advanced levels. Of course, seeing as it was really Flynne doubling up for Burton, she’s the one who tries out the piece of tech, which becomes our gateway to the show’s central premise.

Now I’m reviewing this from the point of view of a non-reader which means despite the plot already existing in its entirety in a book, I’m only sticking to what the show reveals us. The new tech turns out to be a far more sophisticated virtual reality headset without any screens that connects to your brain like a “Neuralink” and is able to transport you seamlessly to a simulation. Because of the way its placed around the brain, it appears the headset is capable of tapping into your neural responses to actually make you feel what your avatar is going through. As opposed to simply controlling a VR avatar via joysticks then, as Flynne does with the “older” tech, this is the equivalent of being placed in someone else’s body and experiencing events as they would. In this case, because the corporation sent the tech to Burton, it’s Burton’s avatar that Flynne navigates, experiencing the world as he would.

The concept immediately carries a lot of promise, with enormous potential for things to go wrong. We see a demonstration in the Pilot episode itself when Burton is subjected to some brutal, graphic torture that Flynne has to endure given how closely she can feel Burton’s pain. She also ends up disoriented when exiting a play session, suggesting the potential for longer play times in this simulation completely disconnecting you from reality. How does one differentiate between the real world and the simulation after spending prolonged periods of time in there. The entire setup carries echoes of The Matrix, Ready Player One, with existential dilemmas mirroring the ones presented by Inception or maybe even Nolan’s own Westworld which had a species struggling to nail its understanding of reality and get a grip on it.

It also presents a dark take on where the future of gaming could be headed. As things stand, studies linking gaming to violence are a dime a dozen. With photorealistic graphics indistinguishable from reality and a sensation of being there, a simple GTA-like heist mission can wind up being a surreal experience, as witnessed when Burton’s avatar infiltrates a Buckingham palace party, escorts a woman out and knocks her unconscious, fending off her robot driver in the day – the “voice in his head” almost serving as the modern equivalent of in-game guides and tips. Again, Nolan toyed with the idea of gaming culture influencing crime in the real world superbly in Westworld Season 3 so I’m interested in seeing if some of that rubs off here and we get a new spin on crime culture inspired by VR tech.

A comparatively lesser challenge that a new show faces is laying out breadcrumbs to keep our curiosity piqued. The Peripheral mostly aces that hurdle, by dropping enough mysteries to keep us occupied, whether it’s the opening dialogue between Wilf and Aelita set to the backdrop of naval warships fighting it out, the strange cloaking tech used by a bunch of thugs purportedly stealing gasoline, or who placed the $9 million bounty on the Fishers and why. The episode’s most telling point may be in Flynne’s realization that something is off about the so-called “simulation” and that the reason it appears to be so hyperreal is because it most likely is. These will likely pay off in subsequent episodes but just having them here as teases is motivation enough to keep carrying on.

Amazon seems to have cut the show a generous enough check. While The Peripheral‘s budget isn’t officially disclosed, it looks impeccably polished from a technical standpoint with competent cinematography and tight editing that doesn’t let plot threads linger on for too long. The limited action that exists is competently choreographed and VFX artists deliver, without any blemishes or gaps. Mark Korven’s score carries the same eerie, dreadful Ramin Djawadi vibes and while it’s mostly generic and functional at this point, I’m looking forward to hearing some interesting themes as the show progresses. It looks and feels like a solid, A-grade production from all angles.

While it’s too early to single out performances given how limited we’ve seen of the characters and how they’re often delegated to the backseat in service of the plot, Chloë Grace Moretz remains the standout. As she herself describes it in the Amazon behind-the-scenes documentary, she brings a tenacious audacity to the character without overstepping too much into rebel territory. She’s inherently a good person, trying to adjust and adapt into a world that’s changed and evolved significantly. Her brother Burton, played by Jack Reynor, does well and helps differentiate his real-world persona from his VR avatar. Other subplots linger in the backseat for now, but I’m most interested in seeing Eli Goree’s Conner – both his backstory and his journey and whether he finds solace and / or gets addicted to the VR world that could potentially give him the sensation of having his arms and legs back. There’s also Westworld alum Louis Herthum playing Corbell Pickett, a kind of drug-mafia controlling certain medication supplies. He was stunning in his limited time on Westworld and he’s certainly menacing in the lone scene he appears in so I’m really looking forward to see how he’s used.

Overall, The Peripheral is a promising start that pitches an intriguing concept, a vulnerable central character and an assortment of ideas and subplots lying around the table. It certainly cannot shake the new series syndrome and not only takes a while to get going but also suffers from being able to make us care significantly for any of its characters. But it carries ideas that would be really fascinating in the world we live in and it has my attention as far as wanting to see the fate of the world(s) unfold.