The Peripheral alludes to some intriguing theories in explaining its central premise. 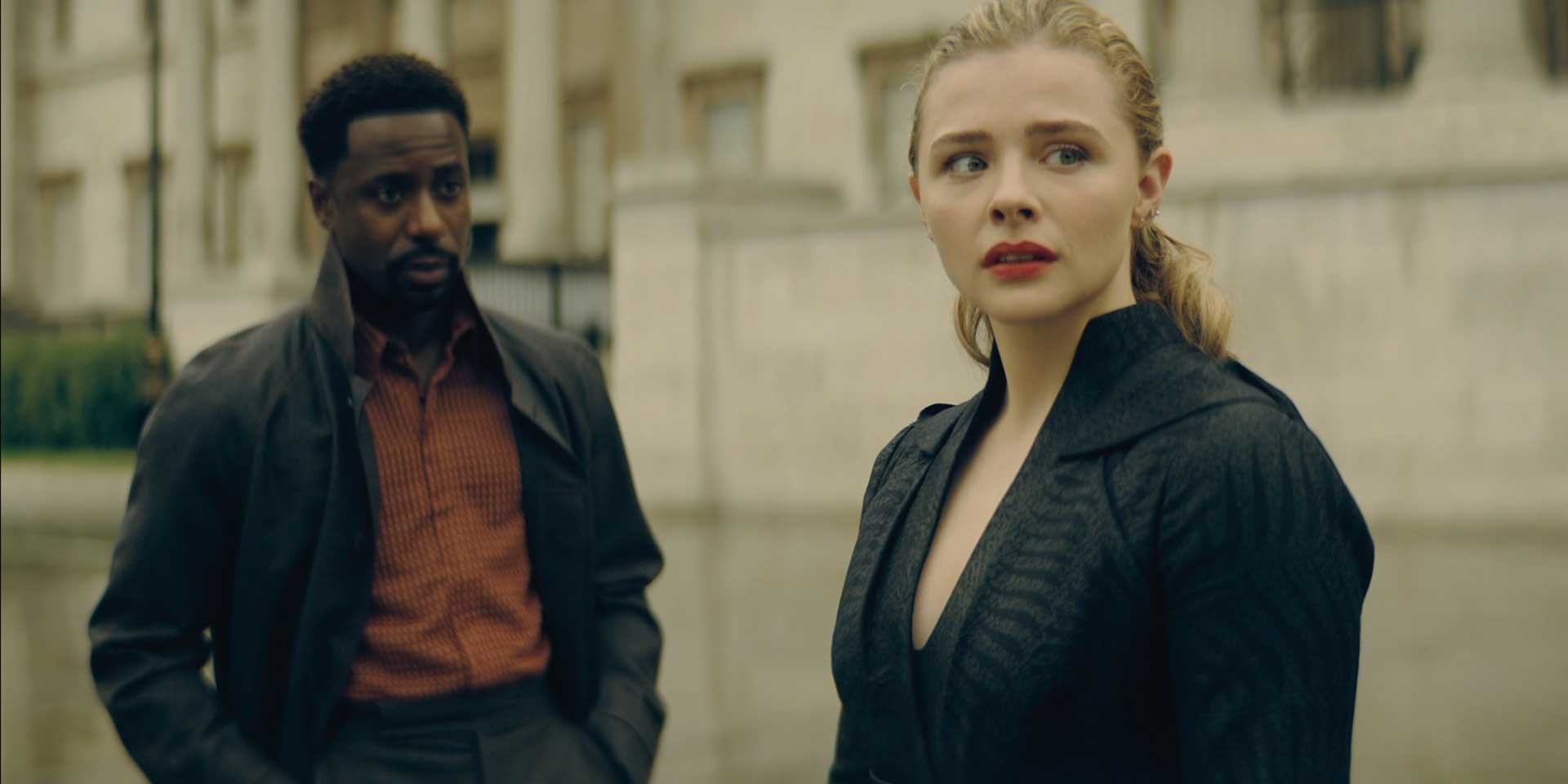 The Peripheral opens up a bit more in its sophomore episode, alluding to an intriguing explanation that connects two realities separated by time. While we starve for more answers, we get just enough of a tease to help us understand the central conceit at play here, as Amazon’s weekly episode format will keep us coming back for more. All of this does come at the expense of some core character development and narrative momentum, which slows down a bit as we settle in with the promise of learning some answers to what’s going on.

Flynne’s hunch in the pilot episode turns out to be right, in a weird, indirect sort of manner. The “game” that she was able to access upon donning the virtual reality headset turns out to be a version of their world circa 2099 (or 2100), about 70 years into the future. The term “version” is key here. Much like Avengers: Endgame, when the future made contact with the past, it branched off an alternate reality termed stub. It gets a bit heady but the implication is that Flynne’s life and the events therein played out differently in the future inhabited by Wilf. We’re told quantum tunnelling helps her tap into the far away reality and its still unclear whether its the future contacting the past or vice-versa. Regardless, the life that she’s living now in 2032 is a branched off reality whose events did not occur as they did, meaning all bets are off so to speak.

You can see how it gets heady, but the show’s in-universe explanation for time-travel feels intriguingly unique. Now shows generally tend to shift their attention to characters and emotions, but I wouldn’t mind sitting through some more exposition when the concepts are this fascinating. Of course, it takes some time for Flynne to don the headset and have the aforementioned conversation where things are laid out. To ease us in, we start right where we left off, when the mercenaries seen towards the pilot episode’s conclusion sneak in to attack. In yet another cool sequence, Burton and his veteran friends knock out the mercenaries by using some electronics embedded in their bodies as part of their war service to hack the visual feeds of the drones circling them, thereby using the mercenaries’ own weapons against them. Again, the concept is a lot more promising than execution but the sequence plays out like a competent action thriller, if a bit run-of-the-mill. However, the promise of those mysterious chips and their servitude in a “war” should bring up its own stories.

The show spends a lot of time getting Flynne to embrace the future reality. It’s a heady concept to buy this quickly, resulting in showrunner Scott B. Smith resorting to the tactic that would yield the quickest results: some knowledge from the future that either turns out to be true or benefits the past. The $9 million bounty placed on the Fisher’s takes care of the former. And a cure for Flynne’s mother’s blindness covers the latter. While it does appear a bit contrived that a small town girl like Flynne would buy such a mind-bender so quickly, I’m partly glad that Smith didn’t spend too much time and too many episodes getting her to accept what’s happening. It’s done and while Flynne still has a task at hand in apprising others around her of the situation, at least she herself is on with it.

The future is also where we learn about some other characters who’ll be notable in the central storyline. Most crucial is Gary Carr’s Wilf Netherton, who finds himself caught in a chain of command headed by JJ Feild’s Lev Zubov and Katie Leung’s Ash as they pursue the search for a mysterious Aelita, the voice “inside” Burton’s head. What she has that they want is unclear. They do figure that the way to reach her is through the past, bringing Flynne into the mix. It’s a simple transaction: they cure Flynne’s mother in exchange for Flynne helping them find Aelita, whose presence and role are shrouded in secrecy.

Of course characters are not entirely left in the dust as we get to spend some time with the one-armed Conner and the wicked Pickett. As Conner, Eli Goree yet again solidifies his character’s stance and hatred for self-pity, emerging quite the bad-ass when he refuses any sort of help or letting his limbless condition get in the way of his self-made attitude. He wants nothing more than to be perceived as normal and does not let his situation get in the way of giving himself a shot at normalcy. Pickett on the other hand just seems to have gotten involved in Flynne’s storyline when his virtual reality storyline is interrupted rudely as receives a contract to wipe out the Fishers with a generous $2.5 million as advance payment from the future, with the remaining $7.5 million to be sent after the job is complete. He still remains largely enigmatic and shrouded in secrecy but this incident drives home the point that evidently, Fisher saw something critical in her encounter with Aelita and as a consequence has somehow become key to the core conflict in the future, with people there taking sides to eliminate or recruit her.

The means by which Flynne inhabits the future help explain the show’s central premise further. She can’t simply “time travel” to the future, a phenomenon that the future Wilf too dismisses as more fiction than science. Instead, quantum tunnelling allows her mind to inhabit a futuristic robotic body dubbed a Peripheral, presumably built to support quantum computing which is practical and well past the research stage. It’s almost like a Grand Theft Auto V where you can jump into any of the three characters and when you do, you’re in control, but when you swich out, a bare minimal AI code helps them carry on with their own virtual lives. The Burton she inhabited in the premiere episode then was not a virtual avatar but her brother’s Peripheral. And any time a Peripheral makes contact with the past, it splits off into an alternate reality of its own: a stub.

The series does a good job of raising questions at this point, but delivers frustratingly little in terms of answers given its extended running time – both episodes run roughly an hour long not factoring in credits. As I pointed out in my pilot review, new shows can be frustrating that way, in terms of the slow building and table-setting they need to do to get audiences onboard. This one at least raises some really fun possibilities and there’s all sorts of directions they can go with the central premise. Will characters from the future access the past? Can they access their own future? What happens to the newly branched off stub? Does it go on indefinitely, leading to two parallel realities coexisting, or does it shut off at some point? What are the ethical ramifications of this technology in the future world? What sort of business opportunities does this open up? Merely judging by the immense strengths of its heady concepts, I’m going to recommend sticking to this for a while longer.