Agents of S.H.I.E.L.D. gets off to a flying start in its Season 5 premiere.

Agents of S.H.I.E.L.D. gets off to a flying start in its Season 5 premiere. 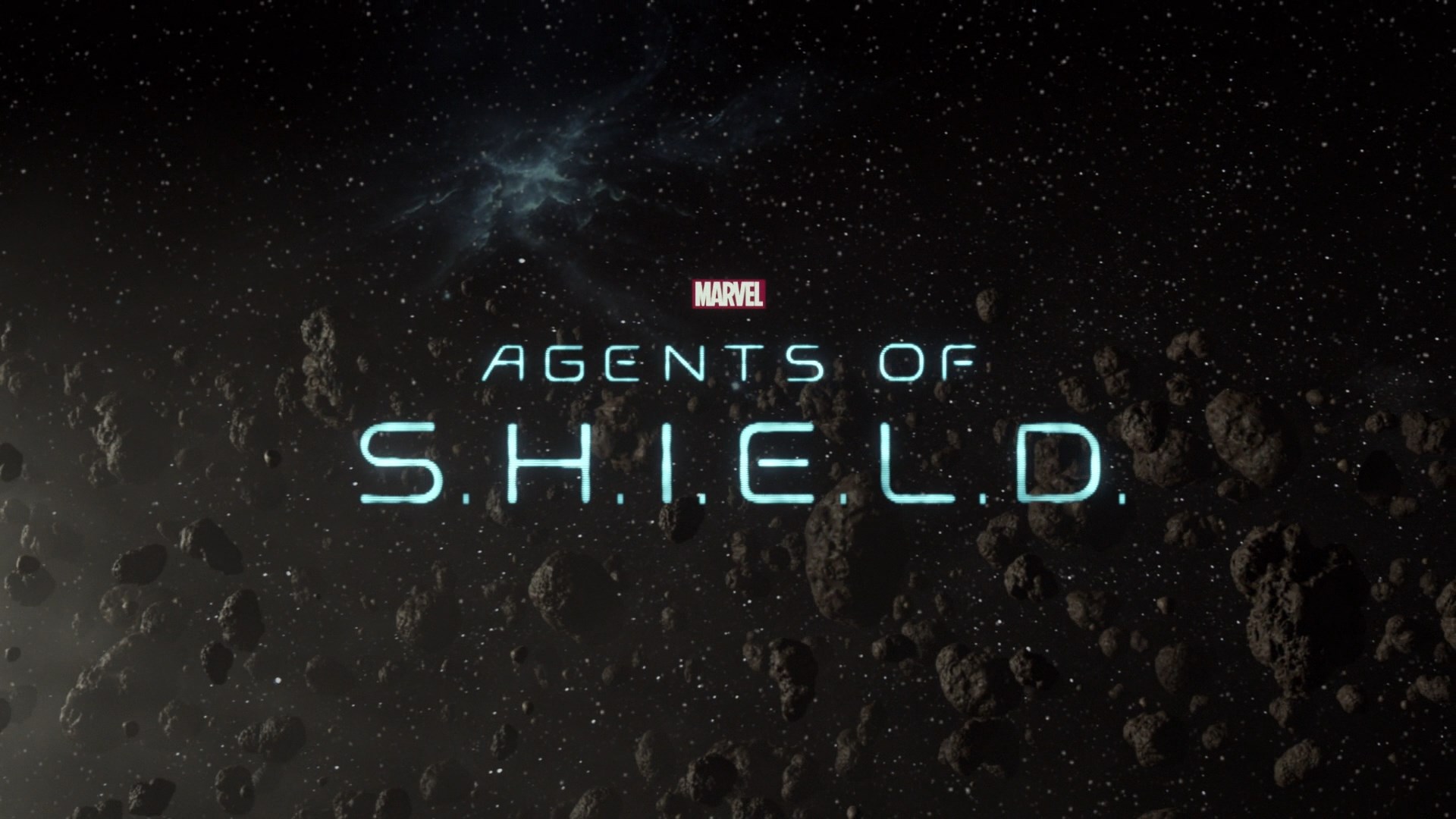 Agents of S.H.I.E.L.D. has had one hell of a ride. When it was announced back in 2012 as a tie-in to the Marvel Cinematic Universe (MCU) to expand the MCU mythology beyond films alone, it was met with a feverish anticipation. Fan excitement went through the roof when the season premiere was said to feature cameos by the likes of Cobie Smulders’ Maria Hill and Samuel Jackson’s Nick Fury himself. It ended up premiering to an unheard of 12 million viewers which was a lot for an original show (even Game of Thrones can’t boast those numbers well into Season 7).

Gradually though, as the dust settled, fans felt it was just an ordinary show meant to cash-in on the MCU’s popularity. Ratings started to wane, until the release of Captain America: The Winter Soldier which revealed a twisted history in that S.H.I.E.L.D. the organization was HYDRA masquerading as the good guys. Rather than ignore the twist the show’s creators accepted and acted upon it and spun the remaining narrative from it. And thus began the slow and painful redemption of the show which came to an all-time high with its Season 4 arcs (or pods, as the showrunners prefer to call them). 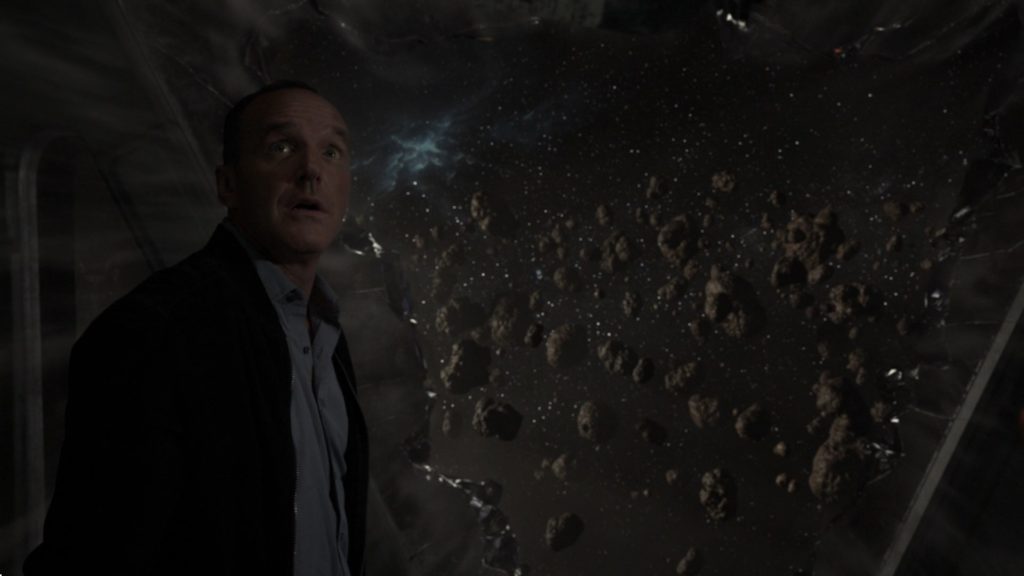 Season 4 had three pods, Season 5 has two. These pods are series of episodes that follow a singular storyline, until it evolves to something else. It helps keep things fresh and rather than sticking to one story over the course of 22 episodes, it gives the showrunners options to try out multiple ideas in a single season. The last season ended with one of the weirder cliffhangers the show has seen, with Coulson and team kidnapped and thrown into outer space. Without holding back, the season premiere episodes not only resolve and explain the cliffhangers but introduce new threads and set the stage nicely for the first of two pods of Season 5.

To recap, and this will contain heavy spoilers, Coulson and his team have been transported not just into a different location but a different timeline. They’re held captive and sent 90 years into the future where the earth is no more and humans are held imprisoned by the Kree aliens. As it turns out, some form of intergalactic or alien-race war ended up in the destruction of our home planet and now the survivors live in a spaceship serving the Kree lords. They meet someone named Virgil who believes that Coulson and his team’s arrival is the very event that will spark off a revolution that will lead to the freedom of the enslaved humans. Unfortunately, he ends up being killed by a monster before he can explain things further.

Exposition is next taken up by Deek, who lets them in on their current situation. He explains that the Kree keep a check on the humans via metrics implanted into their wrists (a concept that I hear, is at least partly inspired from Netflix’s Black Mirror). As the episodes unfold, we get increasingly drawn into the world the humans now inhabit along with a few additional revelations tossed in for good measure, chief among those being the realization that they’ve traveled through both space and time, the current state of the planet and who really was responsible for it ending up the way it does. 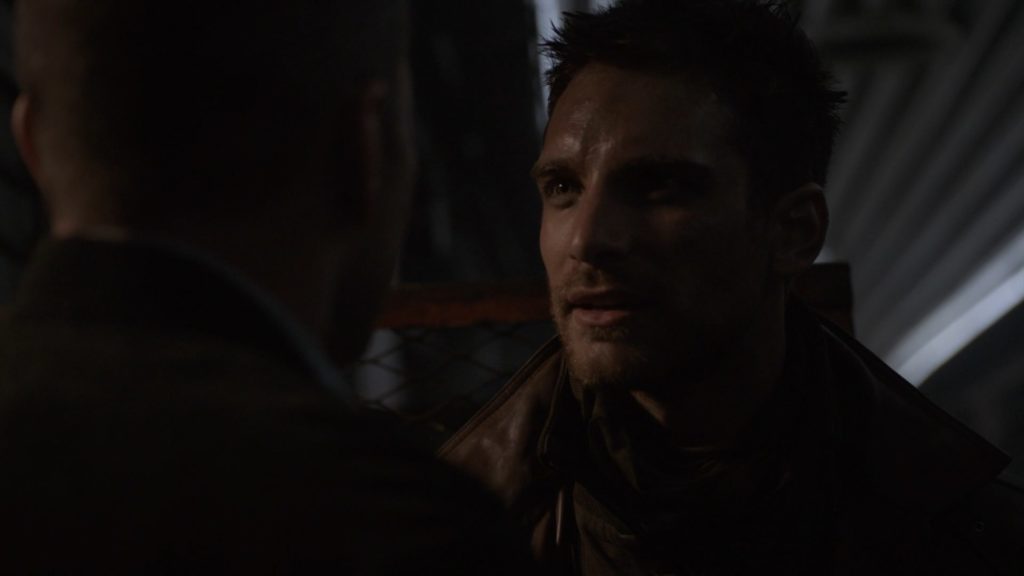 Off-late, Agents of S.H.I.E.L.D. has shifted from being a show about S.H.I.E.L.D. agents hunting down threats to tackling some wacky plots with finesse and polish. The last season saw it deal with such implausible and difficult to deal with concepts as Ghost Rider, the Darkhold, Life Model Decoys and the Framework. The latter of these also makes an intelligent re-appearance here as a device used by Deek to provide humans a taste of what it was like to be on a fully-formed earth. It’s this intelligent storytelling coupled with a tightly strung narrative that make the episodes cruise by without a hitch. We see new characters, concepts and plot devices introduced into the fold seamlessly and the top-notch execution means we don’t have any difficulty getting acquainted with the new stuff.

This also marks the first official introduction of future time-travel in the MCU. What’s interesting about this concept is the possibilities it has and teases for Marvel’s other properties such as Avengers: Infinity War and the untitled Avengers 4. The former is already teasing the destruction of earth at the hands of Thanos while the latter following closely on the heels of Captain Marvel could include the long-anticipated Kree-Skrulls war which could actually end in the destruction of the earth and throw the Marvel universe into chaos. Or, none of it could happen and the heroes might save the day with some other cost to pay. Which means the events of the current season could end up in one of the alternate timelines that the MCU has now branched off into. The visuals deserve mention as well; the show’s effects have only gotten better with time and an increased budget and come quite at par to the quality achieved by the movies in their medium.

A plot such as this always has the tricky aspect of drawing out consequences of actions when the events themselves may not matter down the line. That is, should the agents end up return back to present-day earth, everything they went through could become inconsequential in a way. But with its Framework arc, the show has shown that it can deftly handle such situations and yet ensure that it leaves some sort of a lasting impact on the characters whenever they return. Also, with Fitz left behind, it’s very likely he’s working on something to get them back to where they left from. I wouldn’t be surprised if we get one solo episode featuring Fitz and the present-day earth down the line, kinda like how The Walking Dead diverges into character-focused episodes every now and then or how Stranger Things went this path in Season 2 showing Eleven’s journey to the city and back.

On the whole, this was a solid start to Season 5. It had enough intrigue, action and possibilities to make for a compelling 11-episode pod and I can’t wait to see what happens next.