Superbowl is a hot time for movie geeks. Some of the most enthralling spots are unveiled and aired during this time causing a buzz about movies overall in general. The Superbowl event is typically followed by stats dictating who were the winners in terms of social media views and buzz generated overall. Courtesy Comcast and through Deadline, one such set of stats is now available to better quantify who excelled where.

Avengers: Infinity War and Solo: A Star Wars Story were the winners as far as social media impressions go; the duo generated 161,000 and 109,000 impressions respectively. In a distant third place is the surprise release The Cloverfield Paradox which garnered 41,000 impressions followed by Jurassic World: Fallen Kingdom at 33,400 impressions and Tom Cruise’s Mission: Impossible – Fallout at 31,600 impressions.

When it comes to video views however, things switch up a bit. Jurassic World: Fallen Kingdom raked in the most views on both YouTube (869,000) and Facebook (2.7 million). This was now followed on Facebook by Mission: Impossible – Fallout with 1.6 million views. It seems star Tom Cruise’s social media following played a vital role in popularizing his latest entry on that platform; the star recently also joined Instagram and has amassed 900,000 followers already although it’s not clear if Instagram views are counted here. Avengers: Infinity War took the second spot on YouTube with 635,000 views, right ahead of Fallout‘s 490,000 followed by Solo: A Star Wars Story with 247,000. You can view all the stats in the image below. 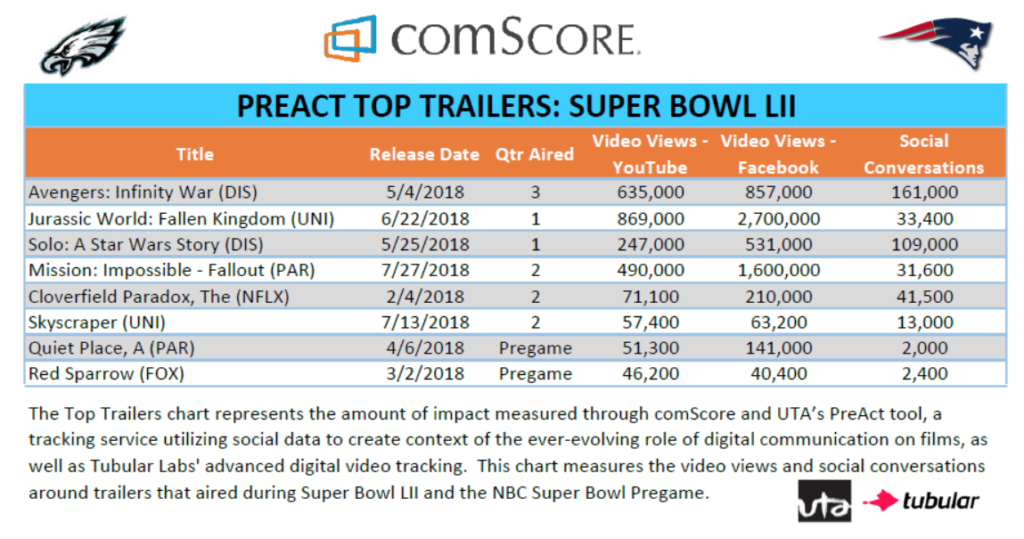 Frankly, it isn’t too much of a surprise that Infinity War stole the show. What’s surprising though, is how much traction Solo has received. Then again, given that it was a Star Wars property featuring one of the franchise’s most beloved characters in a way fans haven’t seen before was enough to sent social media in a frenzy. Whichever way one looks at it, it looks to have been a great Superbowl for Disney as a whole.