A theatrical listing for Avengers: Infinity War might have revealed the movie's run time

A theatrical listing for Avengers: Infinity War might have revealed the movie’s run time

Avengers: Infinity War, one of the most hotly anticipated movies of 2018, is not set to hit theaters until the end of April 2018. However, advance bookings for the movie have opened in some territories, notably the Philippines. One of these theaters, in their listing for the movie, may have accidentally confirmed the movie’s run time.

A listing for the movie on the website of SM Cinema lists the run time of the movie as 2 hours 30 minutes. You can check it by visiting their Advance Screenings section and choosing to Reserve Tickets for the movie. Now the theater itself may not be sure and might have added the time as an estimate or placeholder based on preliminary information received from some of its sources. After all, the movie is still most certainly undergoing some intense post-production and the run time may not yet be locked in. Then again, the last time such a situation occurred was with DC’s Justice League which had its run time revealed in a similar theatrical listing, one which turned out to be accurate. The caveat there was that it happened very near to the movie’s release which lent credence to those listings as against the situation here. 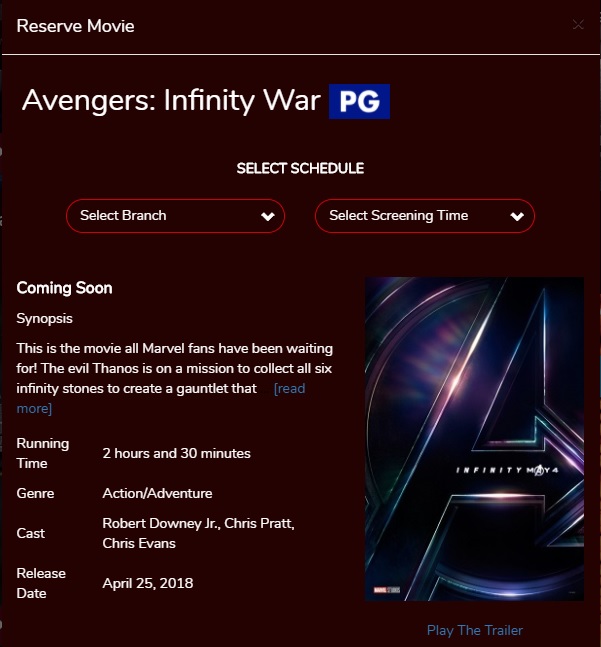 SM Cinema also lists the movie as having a PG rating, although American audiences should not be confused by that moniker. In the Philippines, a PG rating is the equivalent of a PG-13 rating in the US i.e. all kids below 13 should be accompanied by parents. Again, while this seems like the most likely rating Infinity War to end up with based on what we’ve seen from the trailers, it’s too early for it to receive any sort of rating what with the movie still undergoing editing.

The bottom line then? Take this bit of news with a grain of salt. While the final run time would most likely end up being close to this, it’s hard to take this as an official bit of news at this point. However, it does add fodder to the discussion about Infinity War‘s run time. The Russos have previously been vocal about their desire for a 2.5 hour running time to tell the several intertwining stories they need to tell. And with the filmmakers promising to tie in every narrative thread ever teased in the 10 years of MCU history, they’re going to need every minute of that run time they can get. In fact, the longer audiences are willing to sit in theaters for this epic spectacle, the better it is for the director duo and producer Kevin Feige.

What do you think about this? Do you think the movie could indeed end up with a 2 hour 30 minute run time? Or do you still feel Infinity War could do well to shave off a few minutes from that duration? Let us know your thoughts in the comments below.

Avengers: Infinity War hits theaters on May 4, 2018 and opens a week earlier in India and the Philippines on April 27, 2018.