HBO’s Chernobyl delivers a highly gripping finale that wraps up the mystery around the disaster, cementing its position as the best series in a long while. 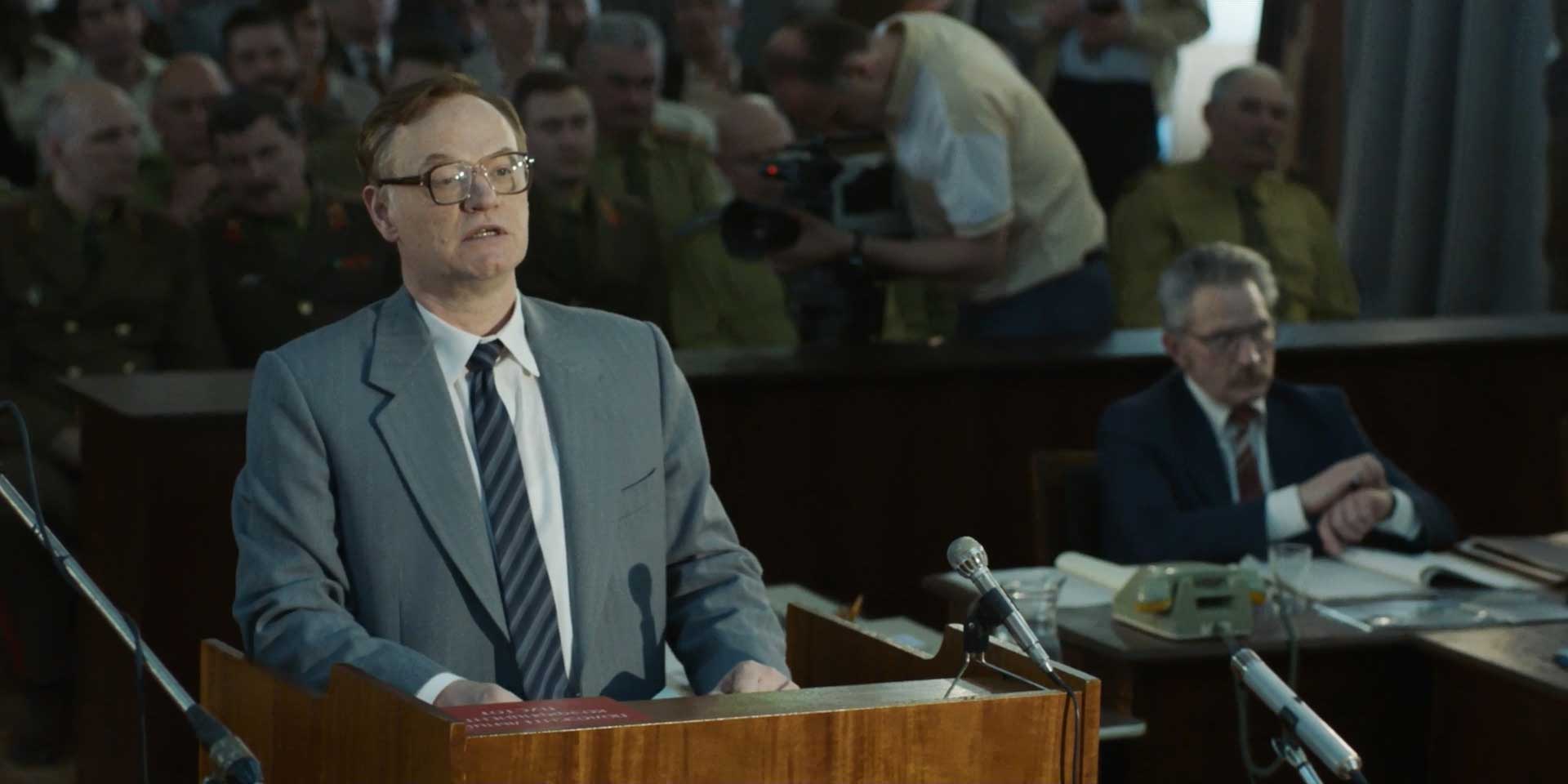 HBO’s Chernobyl mini-series ends on a finale so satisfying, so thrilling and so gripping from start to finish that it justifies the hype around the show as being the best series to air in a long while. The bulk of the final episode centers around uncovering the events of the fateful day when the reactor exploded, as we retrace our steps leading up to the incident to understand the three key points that led to the radiation situation in the first place. Masterfully, these are explained in a lengthy episode-spanning trial where each of the show’s three protagonists presents a key flaw.

Boris Shcherbina, played by Stellan Skarsgard, kicks off the proceedings by educating both the lawyers and the audience members on the basics of a nuclear reaction. It’s mildly amusing to see how quickly Shcherbina has learned about chemistry from his experiences dealing with the situation and his interactions with Legasov, who I’m sure taught him a lot more off screen. He goes back to about half a day before the incident, recounting how a test long-pending since the plant was established needed to be completed to establish its safety norms, while also guaranteeing promotion of the conspirators. When the test gets delayed due to the city’s power requirements, it results in a change in shift leading to a change in staff and the first mistake that night: an inexperienced set of people left to handle a deadly test that required incredible precision and years in the field.

Emily Watson’s Ulana Khomyuk takes the stage next to explain that despite the unsuitability of the men left to handle the reaction, some still display competence by following the guidelines and acting as per instructions. Their repeated insistence upon halting the test is bashed and ridiculed by the head Dyatlov who brushes them aside, mocks them and bullies them into obeying him without question. This leads to the second mistake that night, going ahead with the test despite the conditions not being favorable and more importantly, being coerced into following the instructions of Dyatlov under a submissive power-play that he imposed upon his subordinates. In that moment, Dyatlov completely underestimated the significance of the test and when things go awry, they’re forced to push the AZ-5 button leading to the third and final mistake.

Jared Harris eventually takes the centerstage as Valery Legasov to reveal the function of the AZ-5 button; to calm down the burgeoning nuclear reaction by inserting boron rods. Unfortunately, as he revealed with great hesitation and trepidation, the boron tips are made with graphite to save costs, which come in contact with the reactor first. This fatal flaw, already unearthed in one of the prior nuclear fallouts could have been easily averted, had the KGB not sealed it off to save Soviet face. It was then, a disaster waiting to happen and it took the guts of Legasov to bring it forth into the limelight.

All three performers truly shine in their trial room proceedings and elevate the already excellent material into sublime territory. Stellan Skarsgard displays an inner strength and firmness while also showing signs of some radiation sickness with such nuance that you marvel at his range. Emily Watson, among the few representative females in the series, delivers her monologue with steadfast emotions, holding them back for saving the final blow. But it is Jared Harris, who truly steals the proceedings when he confesses about the fatal flaw that led to the explosion. There’s an intense dilemma there between a burning desire to see Dyatlov fail and imprisoned but also to reveal the truth and for a moment, you almost sense him wonder if one will negate the other. At the same time, there’s also the thought of KGB agents keeping an eye on him and the fate that awaits him upon exposing the state. Harris glances between these different elements and wrestles with that inner turmoil in a matter of seconds. A particularly touching sequence between Harris and Skarsgard where the former acknowledges the efforts of the latter in assisting with whatever was required, coupled with Skarsgard’s ensuing reaction will move you to tears.

The brilliance in this episode, is really in the simplistic writing and the subsequent delivery that ensure even someone with an elementary understanding of English, Physics and Nuclear Radiation and its harmful effects will grasp the severity of the catastrophe along with the explanation of why it happened. Following that is key to understanding what went wrong and who is to blame. I love how Chernobyl doesn’t necessarily shift the blame on one set of people entirely but instead blames the entire state, the KGB and everyone for concealing this known flaw; in essence, the real villain that day was complacence rather than a particular individual’s actions and it was really about the sum of a series of misfortunate adventures coming together to blow up as a nuclear fallout. In real life, events are often a consequence of a great many parameters and this final episode accepts and acknowledges that.

The ensuing epilogue is a symphony of heartbreaking stills. Valery Legasov is kind of exiled by the KGB to live a secluded life, a life where he does not exist for anyone until, as we saw in the series premiere, he commits suicide. His contributions stay hidden for quite a while, not unlike Alan Turing’s role in deciphering important codes that helped the US win World War II. We’re then treated to a montage of images with descriptions outlining the horrors of Chernobyl, contrasting the stories told in the show with reality (it’s frightening to see how accurate Dyatlov was to his real-life counterpart) and it all concludes on an incredibly depressing note that leaves you informed, semi-awakened and partially numb.

The final episode of Chernobyl is such a fine blend of art and modern-day cinema that it’s something purists will be yearning for in a long while. It deserves to be watched, rewatched, studied and dissected to understand the impact of this man-made disaster. Undeniably, the show would’ve taken liberties in its depiction of the Russian incident, dramatising certain aspects. But one cannot deny that it will inevitably kick-off a conversation about how Chernobyl was handled, about the seriousness of nukes and radiation and why responsibility and cautiousness are paramount when dealing with power at that level. It’s a brilliant, brilliant show that finishes with a gloomy, gripping and informative finale, the likes of which will not be seen probably in quite a while. Highly recommended.