Christopher Nolan landed in India yesterday and together with Film Heritage Founder Shivendra Singh Durgapur and visual artist Tacita Dean is set to support the cause of preserving and supporting film. Before that however, he will be attending screenings for his last two movies Dunkirk and Interstellar to be hosted in the city of Mumbai, India. The screenings will be held at different venues and in different formats although on film prints to advocate the notion with perceptible proof that film offers an at-par or even superior resolution and clarity than digital.

Dunkirk will be shown in the 70 mm format at Mumbai’s Carnival IMAX Cinemas in Wadala on 6:00 PM while Interstellar will be screened in a 35 mm print to be shown at Liberty Cinemas starting 8:30 PM. Both films will be preceded by Red Carpet events heralding Nolan’s arrival followed by introductions about the movies from Nolan himself. Prints are being flown from overseas to fit the requirements. For Dunkirk, the intent is to screen the film as it was shot in its original 70 mm format, with special projectors being installed at the IMAX venue to allow viewers to experience the film exactly as Nolan intended for it to be seen. Interstellar on the other hand will have a 35 mm screening from a print that is being flown in by Warner Bros. from Philippines although if the quality of print is anything to go by, one shouldn’t expect it to be a slouch either. 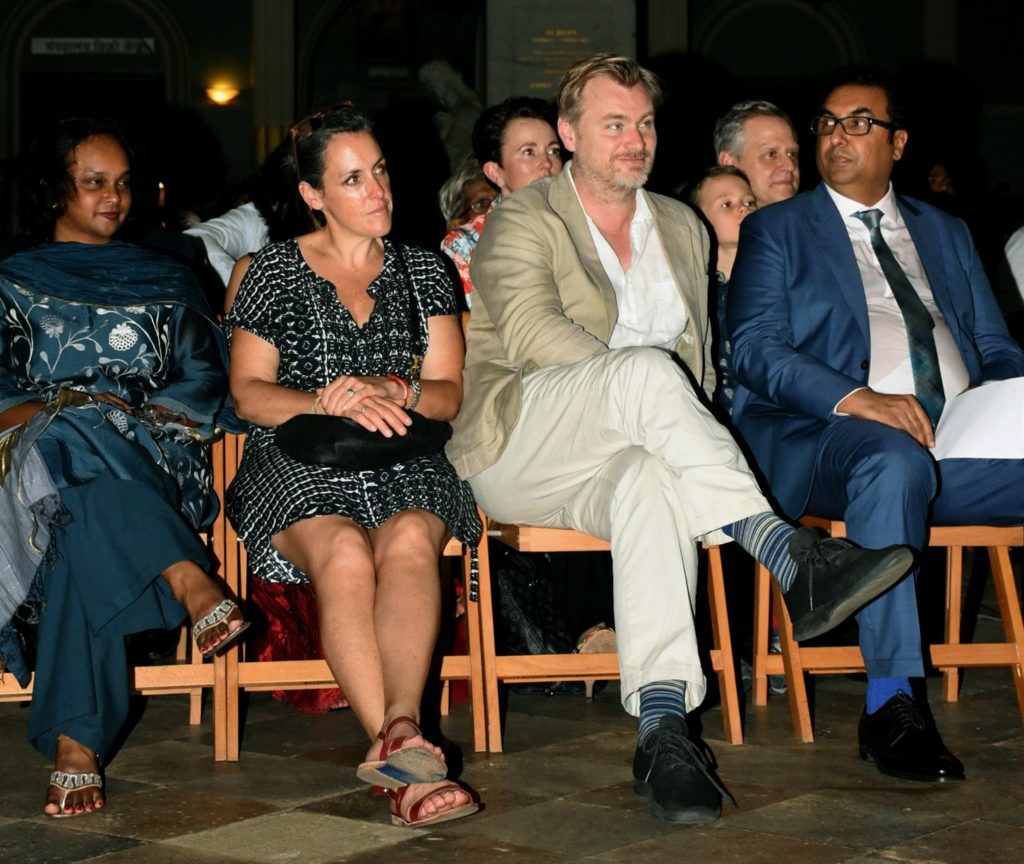 Nolan, Shivendra and Tacita will also hold a conversation on the importance of film as a medium of shooting movies on as well as the practice of preserving films for restoration purposes. A large swath of films released in the earlier decades of the Indian film industry simply cannot be re-watched because the original prints associated with those have been lost. Shivendra has been quite vocal about wanting to preserve films and trying his best to get his hands on as many prints as possible but has received little help from the local film fraternity. The current generation has grown up almost entirely on digital and the trio seem keen to make the case for celluloid as a viable medium for shooting and shun some misconceptions along the way. The talk itself will be followed by a roundtable with some prominent Indian film celebrities such as Aamir Khan, Mani Ratnam, Kamal Hassan, Amitabh Bachchan and Shah Rukh Khan will be present.

If you look at statistics, till 2014, we were still censoring on celluloid. Celluloid isn’t a thing of the past and several regional films continue to be shot on it. It will be a dialogue on how celluloid can co-exist with digital, various challenges of working with celluloid films and why it is important to preserve them.

Nolan himself has been enthusiastic about the conversation. The filmmaker has always been an ardent proponent of film over digital, choosing to film even his most effects-heavy productions in that format. Not only is he be expected to be present at the screenings of his movies, but is intended to lend a strong argument towards the use of film in an era where digital has almost exclusively overtaken 35 mm and 70 mm reels. And this is merely but the beginning with Nolan planning to screen a 70 mm film version of Stanley Kubrick’s 2001: A Space Odyssey at this year’s Cannes Film Festival in May.

Tacita Dean and I are thrilled to be bringing our discussion about the future of photochemical film to one of the most passionate and vital centres of film production in India.

It is indeed exciting to see the veteran director in India and for real. The last time he was supposed to be here as part of a local college fest turned out to be a false alarm so its exciting to see him actually make it this far. Also, with the recent unexpected cancellation of shows of Steven Spielberg’s Ready Player One in India, this should come as good respite for Indians at least to a certain extent. Look forward to our coverage right here on Appocalypse.