A staple hallway fight sequence serves as the highlight of this fourth episode. 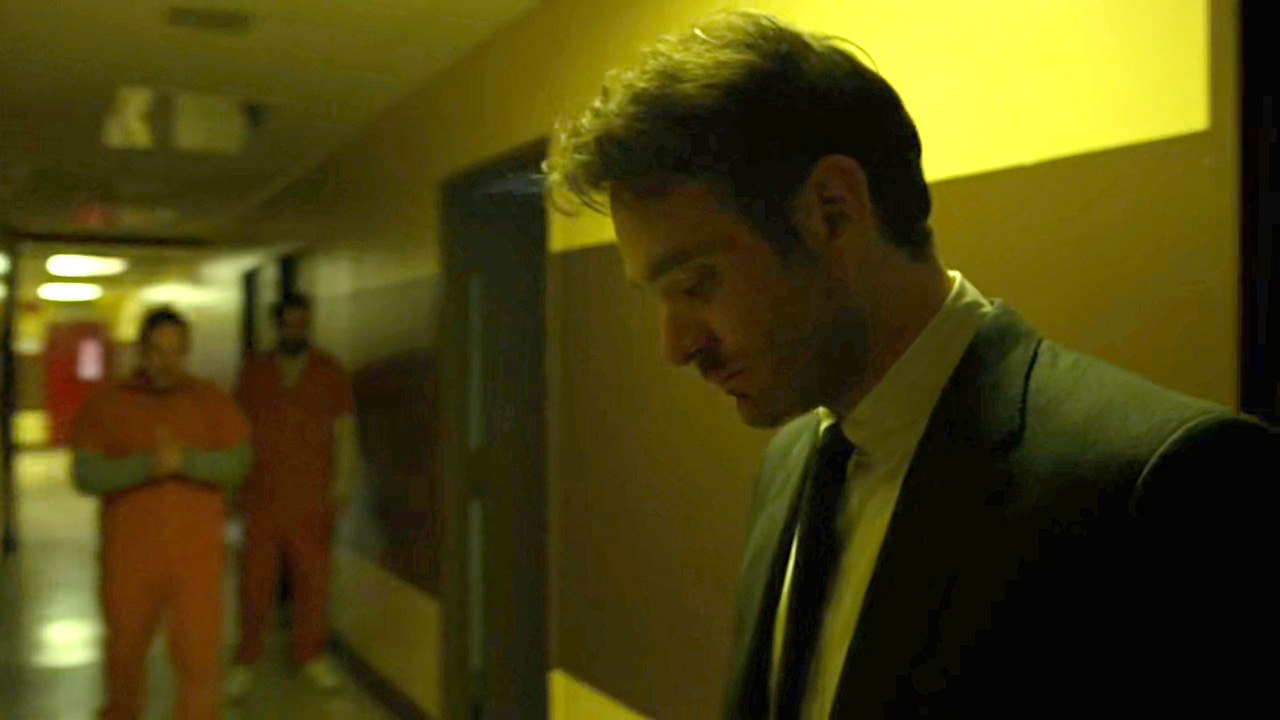 I’m almost too tempted to jump the gun and discuss the episode’s hallway fight sequence but let’s build up to it. By now, pretty much no one on the show is buying Fisk’s explanation that he outed the Albanians just to keep Vanessa safe. Matt is particularly hellbent on exposing that angle and has some rather close shaves and brushes with the authority. He’s still single-minded in his pursuit of Fisk as evil and lands up at a penitentiary in a bid to learn about Fisk’s agenda.

Let’s take a moment to appreciate how far Foggy has come. Ever since he parted ways with Nelson & Murdock and started working for Jeri Hogarth, his life’s changed for the better. He has a job, a luxurious apartment suite and a steady girlfriend who clearly looks like she has the upper hand in Foggy’s relationship. One wonders how the two ended up together but a subdued male and a stern female partner isn’t that odd of a combination perhaps, especially in the bustling metropolis that is New York City. She pushes Foggy to go on the offensive and take Fisk head-on by exposing himself to the public instead of hiding in secrecy.

And that leads to? Foggy Nelson for District Attorney. I didn’t see that coming and I hope this show doesn’t turn into a political House of Cards like conspiracy drama. Digression aside, it gives Foggy something important to do and attack the problem from an unforeseen angle. Besides, I’m sure Matt would appreciate having someone like Foggy at the D.A. level although if that does come to pass, we can very well kiss Nelson & Murdock goodbye forever. Boy I miss that firm and it’s small office.

Meanwhile, the skeletons in Agent Poindexter’s closet are slowly beginning to come back to life. It appears all’s not as it seems in the second episode’s shootout as Dex ended up shooting a lot of Albanians not really in self-defense as he claims but in cold-blood. Fortunately for him, Fisk backs his statement but it’s clear he wants Dex on his side to do his bidding. Fisk has a knack for spotting talent; he even appreciates Murdock’s inane ability to see and perceive like a normal man despite his blindness and he’s taken a fascination to Dex that should take a couple of more episodes to manifest successfully.

Matt’s not laying low himself, far from it, he ends up looking for his next lead, an Albanian who can reveal Fisk’s motives. And that brings us to the most exciting fight sequence this season and the one Daredevil is quite well-known for: A extended one take hallway fight where Matt Murdock beats the shit out of some goons. This one’s a lot more ambitious in that it’s almost a single 10-minute tracking shot, using clever angles to switch between Matt and his stunt double and yet ensuring we never lose track of Matt’s perspective.

To spice things up a bit, this one also takes place with Matt in his normal, lawyer suit and with Matt injected with some drug to make him drowsy and raise the stakes. It’s easy to see where the cuts could be but that doesn’t make the brutality of it any less effective. By now, it appears the crew behind the show have mastered the ins and outs of planning such a sequence and I can only hope this is not the only hallway fight of the season. I’d love for another one with Agent Poindexter a.l.a. the gory one with Frank Castle in Season 2; now that would be really something.

Daredevil is flowing along much much better than any of Marvel Netflix’s outings. At this point, I can only anticipate a slouch in the middle episodes before it picks up back again. I’m just waiting and waiting for this show to disappoint me with at least one episode but so far the only disappointment it’s handed me is that it isn’t giving me that episode I can bash. Terrific stuff.

Check out our review of Daredevil Season 3 Episode 5 here.