Fisk explores Poindexter’s past in a Bullseye centric episode. 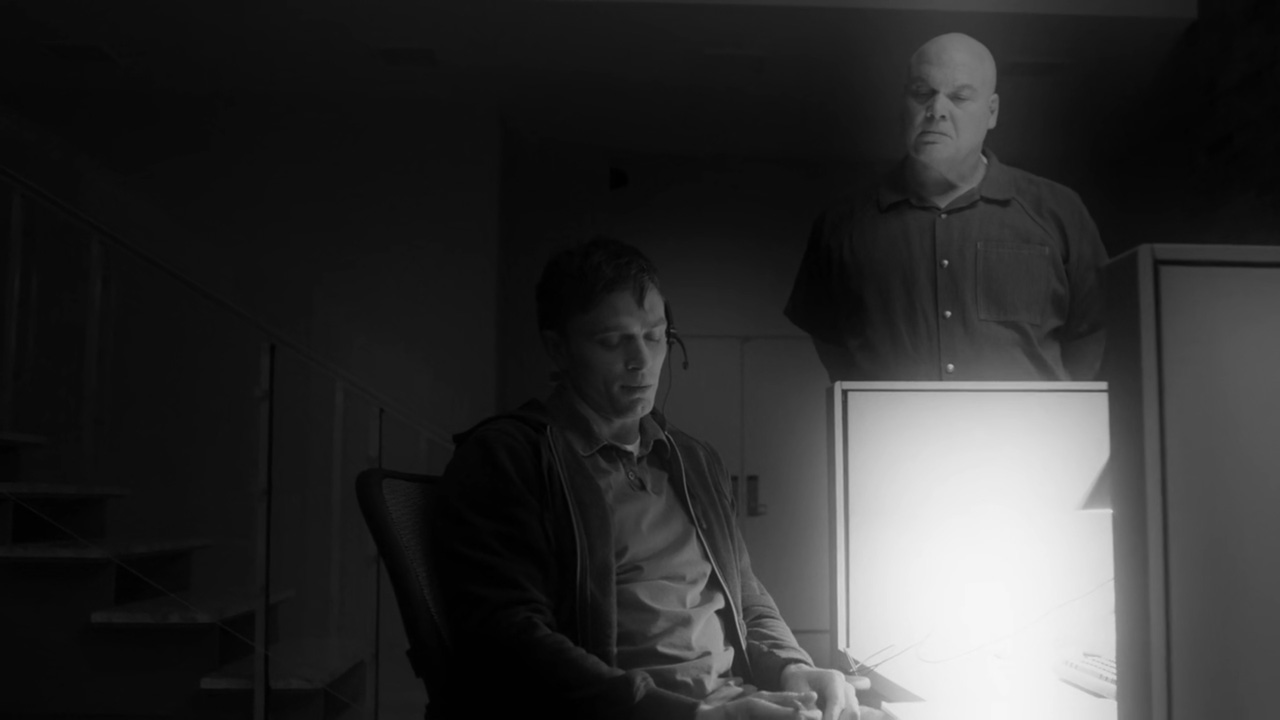 In a dramatic change of pace, Daredevil chooses to do a standalone episode by focusing almost entirely on the show’s new find, Agent Poindexter. Also known as Bullseye in the comics for his highly accurate and precision based targeting, Fisk’s lawyers bring him files and tapes of Dex’s therapy sessions to help him understand the man behind the FBI uniform, kicking off his foray into Dex’s past.

The sequences themselves are intriguingly directed. We see Fisk present at pretty much all times and some of the early scenes depicting Dex as a child and his interactions with both his father and his therapist take place in the same penthouse that Fisk is holed up in. The transition to black and white takes Fisk out of the picture while allowing him a vantage point into the former sniper’s life as he observes visually what Dex has been through.

Dex himself is shown suffering from borderline personality disorder and exhibits some very interesting traits. For instance, once he kicks off a series of target hits, he’s just unable to let go and feels a strong urge to continue, in the hopes that it’ll quell his inner anguish. A therapist who is finally able to understand him and teaches him basic empathy, or at least how to pretend to empathize, passes away leaving him further devastated. We also see the woman from his work who he’s been stalking adversely and things almost work out for him when the said woman takes an interest in Dex, only for it to turn into horror upon realizing Dex knows more about the woman than she’d like.

What we’re seeing is the classic origin story being told for a supporting character that’s poised to play an important role in the series. The Netflix format of 13 episodes (at least for its Marvel productions) allows plenty of breathing room to explore parallel subplots, side-quests and origin stories such as these and I’m wondering why more shows didn’t resort to this technique. It only serves to etch Dex further as a character in our minds so that whatever conflict follows between him and Matt, should eventually help us root for both sides with equal effect.

Fisk’s game is becoming clearer and clearer. Not stopping at studying Dex, he’s sent the cops on a wild goose chase by naming Matt as his corrupt lawyer. In an instant, the FBI is on Matt’s tail which also draws Foggy and Karen into trouble as the trio inadvertently worked with Matt as part of Nelson & Murdock for a company who just so happened to be one of Fisk’s shell companies. Boy that’s going to be troubling for them.

What’s more troubling for Karen is the person who assigned them the case is the one she ended up killing back in Season 1, something she confesses to Foggy in private as part of attorney-client privilege. That’s going to spur up an interesting dynamic between the duo as they balance their friendship with Karen’s act of self-defense, which could mean trouble for Foggy’s D.A. ambitions. I just hope the showrunners don’t make it an excuse to link the two together; we’ve been down that road and the further the romantic subplots are kept from the show, the better.

Daredevil continues to deliver one knockout episode after another and this one’s no different. If anything, it’s one of the most pivotal episodes in that it introduces us to the enigma that is Agent Dex, in hopes of making us see his point of view. It’s interesting how, despite Dex’s primary skill being focused and accurate targeting, that’s been the subject of just one action sequence all this while. This show truly knows not to overplay it’s cards. And this can only mean we’re in store for something really really special.

Check out our review of Daredevil Season 3 Episode 6 here.