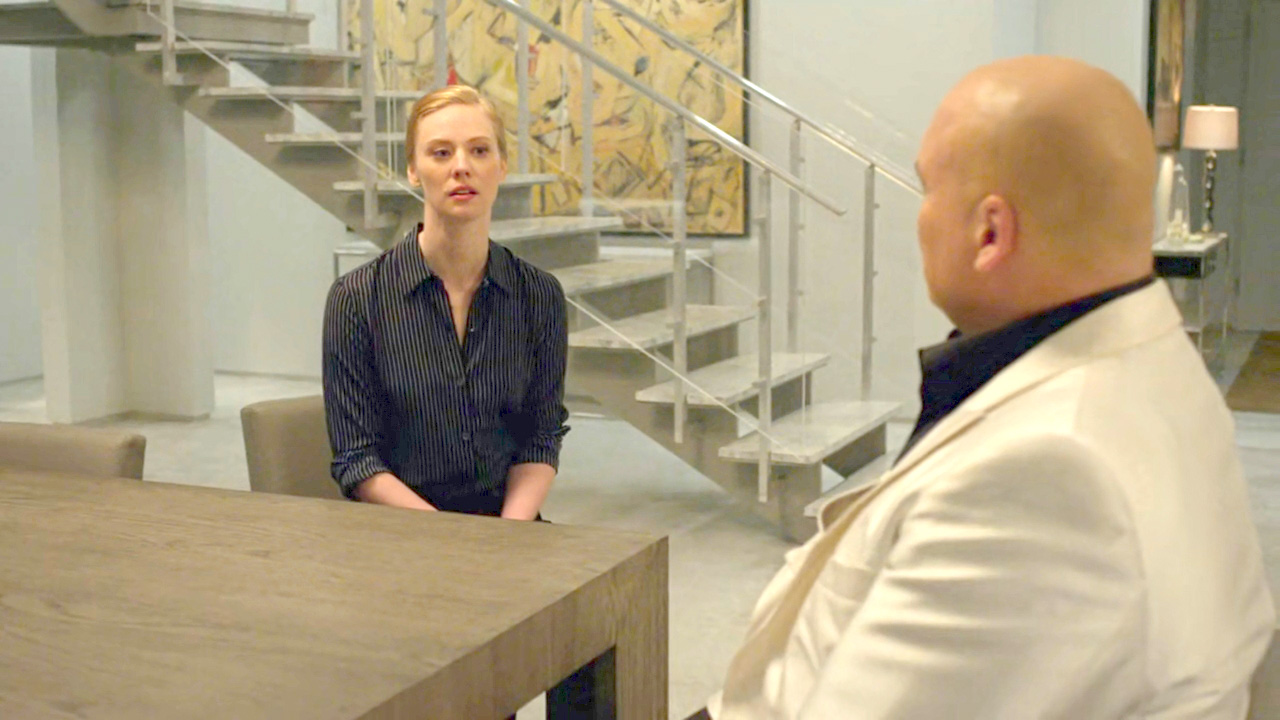 After being mostly absent from the previous episode, we return to examine Dex’s troubled state of mind. It’s also refreshing to see Dex’s interest in stalking Julia has less of a romantic subtext to it as opposed to a therapeutic one. Being around Julia for Dex is the equivalent of a therapist in Julia; she clearly has a calming effect on his otherwise volatile personality and fragile mentality and evokes memories of the therapist he shared a great comfortable equation with. It’s why he keeps gravitating towards establishing some kind of bond with her, which she rightfully mistakes as creepy behavior. That isn’t to last much long however as Fisk clearly has his men get rid of her. Whether or not he has her bumped off or simply abducted is left ambiguous, at least to me.

Fisk gains his strength largely by forcing our major players to use increasingly confrontational tactics to frame him. A desperate Karen marches straight into the penthouse in which he’s holed up and provokes him to do something to her which can somehow be caught on camera as evidence of a crime he committed, good enough to send him back to jail. Unfortunately, our dear old Foggy storms in at just the right moment causing Fisk to back off from his stance and realize what Karen was truly up to. You really have to be desperate enough to barge into Fisk’s room and talk to the psychopath face-to-face, admitting one of the worst things you’ve ever done to someone that just so happened to be close to Fisk, only to get a physical reaction from him. Karen has crossed that line of desperation and is all too keen to put Fisk behind bars, even if it means risking her own life to do it. At this point, the only people Karen has in her life worth caring about are her family and I wonder if Fisk will somehow figure that out and send someone to teach Karen a lesson.

Matt and Nadeem meanwhile have established a small team-up of their own and scavenge Dex’s house for clues as Nadeem keeps him in the confines of the FBI by offering to clear his name. Of course, it doesn’t last long and Dex is on to them, although I doubt he was able to identify who was it that invaded his house. Poor Nadeem gets shot and he can’t even admit to his wife for fear of her freaking out. I wonder how he’s going to get that wound out of him; perhaps a visit to his boss Tammy Hatley would suffice. I’m keeping my fingers crossed for Hatley to turn out working for Fisk as well as that plot twist would mean the instant end of FBI Special Agent Ray Nadeem’s career and life.

Foggy is quite out of place in this one as he tries to expose Fisk for what he is. Having figured out what he’s on to, he does help the audience understand what Fisk is truly trying to achieve and puts it in words that register an impact. The FBI is now essentially Fisk’s private army and he’s using it to legally get rid of all the people who might be detrimental to his best interests, directly or indirectly. That’s some wickedly cunning scheming out there and if you needed any more reason as to why Fisk is one of the best antagonists and villains in comic-book filmmaking right now, look no further. He’s better than most Marvel Cinematic Universe villains and shall hold a special place for years to come.

The revelation at the end though is what knocks you off your feet. I’ll refrain from spoiling it, keeping it for discussing in next episode’s review but it’s bound to give Matt Murdock a complete jolt and force him to reexamine certain events in his life. It’s fitting then that the next episode of the show is titled Revelations for if Episode 7 dealt with the aftermath of Matt’s fight with his fake alter-ego, the next one is going to deal with the aftermath of the climactic reveal in this episode in at least some way.