Doom Patrol starts off strong and embraces its weirdness to launch a new breed of heroes. 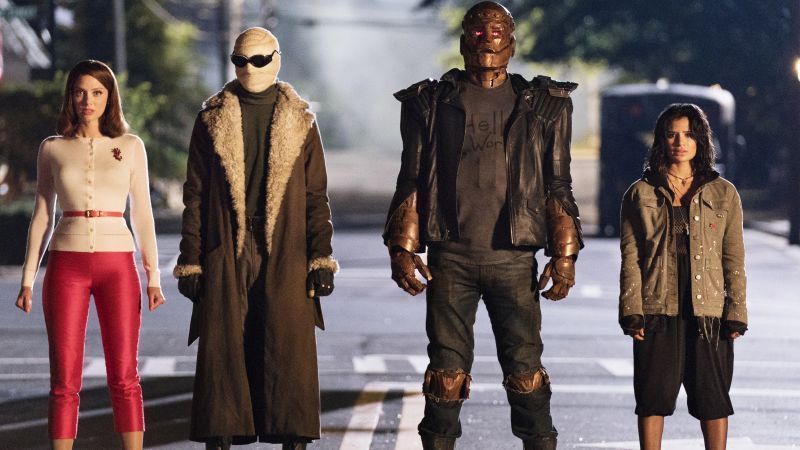 Doom Patrol premiered on the DC Online streaming service with a pilot episode that has as much focus on the show’s characters as it does on their inherent weirdness. Introduced to audiences first as a backdoor entry in the fourth episode of DC Online’s debut offering Titans, the pilot episode stands on its own, not requiring any mandatory viewing of Titans to understand its core team. There are a few cast changes, even some character tweaks, but overall the show quickly draws you in and gets off to a strong start. By the time it’s done, you’ll be signed-on to see more of their adventures.

There’s a lot to like here so let’s get that out of the way. Showrunner Jeremy Carver with supervision from Geoff Johns and directed by Glen Winter, Doom Patrol is quite clear about embracing its weirdness from the onset. There’s a lot of fourth wall breaking courtesy Alan Tudyk’s Eric Morden, who opens the show in Paraguay, 1948 with his transformation into Mr. Nobody. We’re then given a tour of our leads with their respective origin stories, with Robotman’s making the strongest impression. Played in his human form by Brendan Fraser, Cliff Steele suffers a tragic accident that alters his memories and leaves him in a dying state, with the only way to save him being transferring his consciousness beneath a robot tin body. Instead of dispensing the origin quickly, the show plays some strong emotional moments off it, particularly his bond with his daughter which inspires him to carry on with his life.

There’s Rita Farr, the acclaimed 50s actress who ends up with a disfigured structure that alters her viscosity with no control over it. Matt Bomer voices Negative Man, who as Larry Trainor sufferred a fatal crash due to a surge of negative energy and needs to be kept wrapped in bandages to contain his outbursts. And finally, there’s Diane Guerrero as Crazy Jane, taking James McAvoy’s Split act much further with 64 personalities trapped within her, some of which we get a glimpse of. Behind all this is Timothy Dalton as Chief Niles Caulder, taking over from Bruno Bichir and brings a softer, more caring personality at the forefront in a change from Titans that doesn’t feel too drastic once Dalton takes over.

What’s great about Doom Patrol is that there’s an underlying effort to make us care for these misfits, rather than jumping off to the action straightaway. Even though we’ve sort of met these characters in Titans, we meet all of them again in a setup that distinguishes this show tonally from what we saw in the other show. There’s also a common element across these characters in that they were all essentially non do-gooders and had flawed characteristics, which is another way of saying they weren’t the nicest of people. Cliff and Larry were cheating on their spouses and Rita was repelled by the mere sight of disabled people. It seems only fitting then that they end up with disabilities that stem right out of their flaws; Rita becomes hideous in her “troubled” form while Cliff and Larry are rendered just unable to see or mate with anyone else.

The streaming platform is also going the full R-rating route and if Titans left any room for ambiguity, this one outright removes it by featuring nudity and frequent swearing in its very first episode. This is not the show that’s targeted at PG-13 kids but something that’s more for the somewhat adult teens. Parts of it kind of leer towards that mentality in terms of both direction and writing. Things escalate rather quickly in the episode’s climactic moments and bizarre takes a whole new meaning when a donkey fart releases a cloud of green smoke with the text “The Only Limit is the Mind”, followed by a portal opening up that begins to swallow the whole town. And no, I did not exaggerate or make one bit of this up.

DC is giving Doom Patrol the lavish treatment it gave Titans in terms of production values and visual effects. The show looks outstanding, with different visual palettes distinguishing its time periods and refrains from going full wide-screen 16:9, opting for a somewhat more anamorphic look. Visual effects are competent, but a bit choppy especially when rendering Rita’s “Jabba-The-Hut” form in the open town and some explosions that result. It’s definitely cinematic in every aspect, with an intro that’s much better than the rock-punking Titans (and one that I look forward to viewing and deciphering more with each episode) even as some musical themes begin to develop for our show’s gang of weirdos.

It’s also admirable how easily accessible the show is to newcomers. While it seems to have been inspired by the Grant Morrison run of comics, I for one haven’t read any of those despite being an ardent comic fan. And yet, the show was able to introduce and make me empathize with its leads in just a single hour. Considering how I failed to kind of connect with Robin throughout Titans, this is a remarkable achievement. I’m really looking forward to some more moments that explore these characters in the past decades and remain positive that the flashbacks weren’t one-off; there’s just tremendous potential here to run storylines in the past and future. Plus, it would give Matt Bomer and Brendan Fraser lots of material to play with apart from merely voicing their respective characters.

Like Titans though, Doom Patrol is still a bit unfocused as far as story goes. There’s no central motive or antagonist at play here, except for Mr. Nobody, who I’m not even sure will remain the villain forever. There’s a whole lot of stuff that goes unexplained regarding the origins of the mysterious negative energy or that entire climax, which I’m sure will be cleared out in the following episodes. I just hope they build towards something and not just alternate episodes between introducing further new characters and going ahead with the A-plot like Titans did. Based on the fact that Episode 2 is about to introduce Cyborg though, I might be sadly wrong.

Despite its shortcomings, Doom Patrol delivers a tremendously enjoyable and, for the most part great premiere episode that has immense potential in how it expands and grows its characters and their interests beyond the simple activities that they’re currently hooked to. I’m a lot more positive for this than I was for Titans and by the time the 15-episode run comes to a close, we should come to learn and love out new bunch of super-misfits.