Game of Thrones Season 6 Review – For The Throne

Having run out of published books, Game of Thrones enters uncharted territory, yet concludes with the series’ strongest episodes by far.

for the throneGame of ThronesTV Show Reviews
By Divij Sonak On Apr 12, 2019 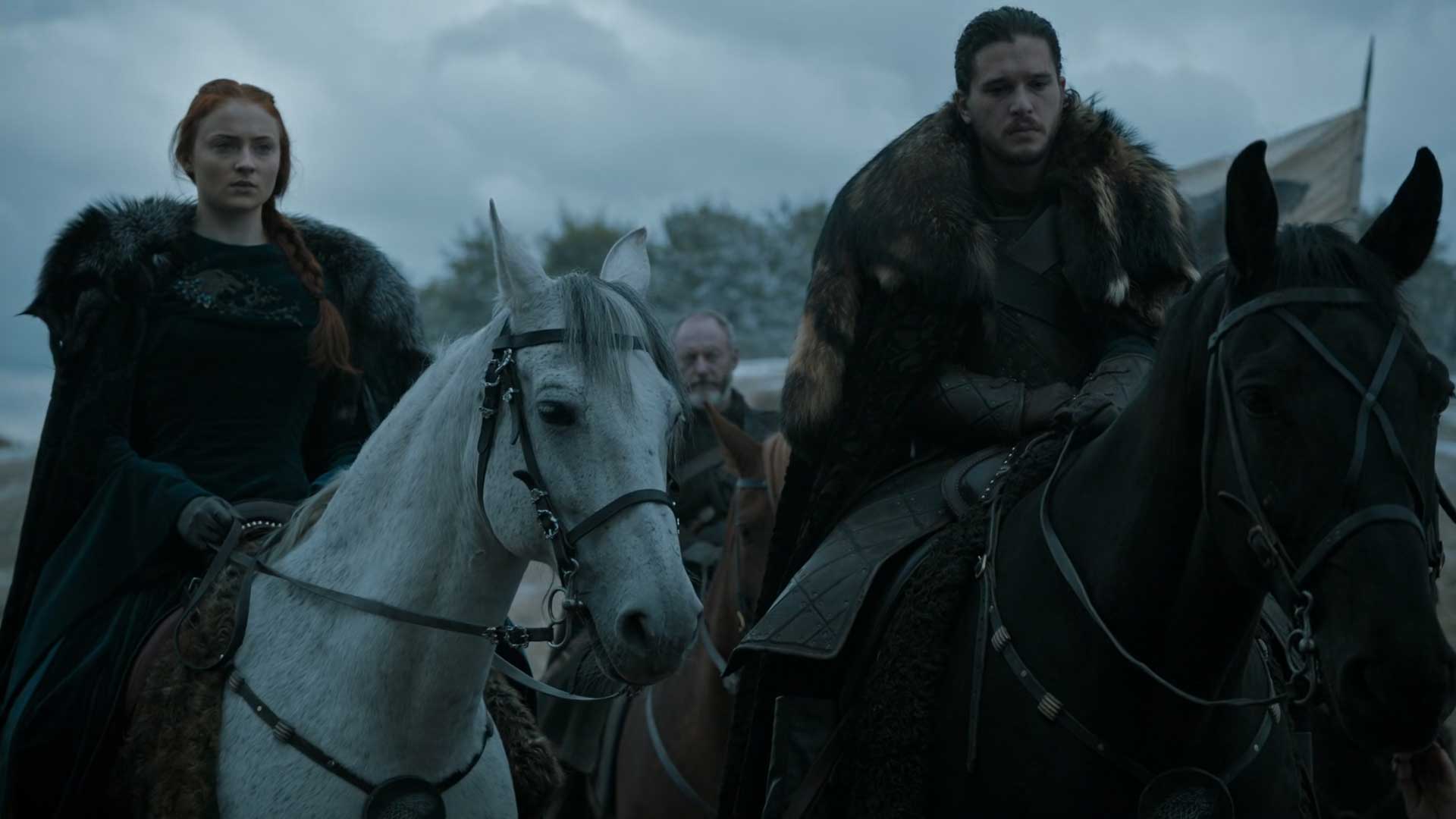 With Season 6, Game of Thrones enteres some precarious, uncharted territory. The officially published books have all been used up (well, mostly) and with A Song of Ice and Fire writer George R. R. Martin failing to live up to his self-imposed deadline, there’s no full-fledged novel to draw from. Consequently, there’s a lot of original material thrown in and showrunners David Benioff and D. B. Weiss are challenged to take the characters toward their endgame in what now looks like a shortened show. Luckily, the fact that Martin must at least have some drafts of The Winds of Winter lying around means the next novel in the series is not all inaccessible.

Despite the limitations, the result is a richly rewarding season with plenty of payoffs towards the end. Unlikely alliances are around the horizon and so are once thought to be distant reunions. The Starks get the best of the latter after the hellish circumstances they’ve been through in all these seasons. The show goes as far as to bring back Benjen Stark in an important cameo. While not explicitly referred to as such, he is the book’s mysterious Coldhands, dangling between the worlds of the dead and the living, his state a key into unlocking the mysteries of the White Walkers.

There’s a lot going on in Season 6 as far as major plot developments go. But none are bigger than the show’s first significant event. Jon Snow’s resurrection had thus far been the subject of intense speculation, discussion and debate for the better part of a year, spawning fan theories and heated arguments among Game of Thrones fanatics. So much was it out there that his revival was believed to be one of the worst kept secrets. That’s exactly how it turned out as the Prince who was promised returned after dying courtesy (again, as correctly predicted) some magic from Melisandre and some help from her Lord of Light.

Jon’s resurrection is an important part into his journey beyond what lies ahead. Whereas the older Jon was a lot more concerned with the Night’s Watch, fulfilling his sacred vows and willing to fight with his last breath, that Jon died when his own members of the Watch stabbed him in the back (or up front actually). With his death, his vows have ended and he is no longer bound to serve. His focus also changes dramatically from keeping the wall to fighting the White Walker threat and the first step towards that is regaining the North and consequently, the men of all houses in the only war that matters. This brings him face-to-face with one of the show’s universally scored villains Ramsay Bolton, perhaps the only out-and-out negative character without a shred of a sympathetic side.

Before Jon can fight Ramsay though, there’s an emotional reunion to be hand between him and Sansa. Despite the two never having any scenes together, there’s a genuine sense of warmth and relief when they first meet; it’s certainly gratifying to meet a sibling in a time when almost everyone you loved is gone for good. Jon and Sansa form an unlikely bond and comfort in each other, and Sansa’s arrival gives Jon further motivation to get down North and battle the other bastard holding it. With the importance placed on Jon’s role, it’s only natural to assume him as one of the show’s more standout leads.

Cersei, the other player who suffered immensely at the hands of the High Sparrow courtesy her Walk of Atonement in Season 5 plots a season-wide plan for revenge. That plan takes several shapes and at one point, even leads her to form a truce with rivals Olenna Tyrell and her uncle Kevan Lannister. Her most valued asset though is reinstated Maester Qyburn and it’s fascinating to see how important he’s become since being discovered dishelved in the ruins of Harrenhall a few seasons back. Her plan takes an explosive turn when she picks up the Mad King’s wildfire pots laid down beneath King’s Landing.

The result of both these important plots is two of the show’s best episodes thus far, both helmed by Hardhome director Miguel Sapochnik. Battle of the Bastards, the penultimate episode, delivers the show’s finest, widest, largest and without doubt most expensive battle sequence to-date, expertly choreographed using tactics and strategies from medieval history. It’s exhilaring from start to finish and it’s saying something if it can make you believe even momentarily that Jon will die despite having been reborn in this very season. Jon’s delivery of the final punches are immensely satisfying, as is Sansa’s smirk upon heaping a terrible fate on a disgraced husband. Meanwhile, The Winds of Winter delivers a masterfully directed, edited and choreographed opening sequence lasting 20 minutes, accompanied to the Light of the Seven track by Ramin Djawadi that sees little pieces of a giant puzzle falling into place. That puzzle leaves your jaw open when it fits and explodes, with disastrous consequences and a bunch of foes and supporting characters all wiped out in one fell swoop. Game of Thrones really thins the herd by the time it ends and this final episode has a lot to contribute here.

There are of course, a lot of other things of interest and intrigue. Bran’s warging abilities open up new avenues of visiting the past through flashbacks, something the showrunners have avoided thus far to preserve the show’s mythic, timeless quality. It’s heartbreaking to have these said abilities also be responsible for Hodor’s origin, resulting in one of the saddest outcomes ever seen on a show. At the same time, it’s also enlightening to finally see some fan theories play out as the said flashbacks also take Bran to the Tower of Joy to witness the birth of Lyanna Stark’s son. Arya meanwhile undergoes the second year of her Braavosi subplot but finally ditches it for good when she can’t bring herself to kill yet another of the Faceless Man’s contract targets; very satisfyingly, she walks off Braavos, with the realization that she was always meant to embrace her identity as Arya Stark. And in a final gut-punch, she lands a brilliant blow by delivering justice to the man who schemed with the enemy to get her mother and brother out of the picture.

Some other characters make a comeback as well, chief among them being Sandor “The Hound” Clegane. Left to die by Arya, the Hound finds refuge in a peaceful community that also contains Ian McShane’s appearance. The Hound, on his eventual path to killing, comes across the Brotherhood without Banners and we meet Berric Dondarrion and Thoros of Myr in a delightfully violent scene. While the Hound’s storyline feels a bit trite, it’s good to see him quickly back into the mix of things and return to his former, violent self. Not all characters make quick returns though as the Dornish ladies are again underutilized with some poor writing while Alexandar Siddiq’s Doran Martel is quickly dispatched in the first episode itself, resulting in a highly important character being treated underwhelmingly and given the short straw. What a waste.

Season 6 moves much faster compared to say, Seasons 3 or 4. Where those seasons stalled in progression, meandering around journeys and conversations far too longer, Season 6 advances quicker compared to its predecessors, yet gives enough time for sequences to play out to their natural length. It’s also notable how each director is handed two consecutive episodes to direct in an approach inspired in part from Season 5; it almost gives them their own TV-movie to build and lets them touch all characters without necessarily having to force them into every episode. Two new directors are introduced in Daniel Sacheim and Jack Bender, though not entirely new to TV as a medium (Bender directed episodes of Lost) and they both do justice to the episodes they direct. Miguel Sapochnik is technically new to the series as well, having only come aboard during Season 5 but by the time Episodes 9 and 10 have aired, you’d be mistaken for considering him a true veteran.

Despite the technical accomplishments it’s already known for, Game of Thrones steps up its game of effects dramatically in Season 6. This is especially notable in Battle of the Bastards with huge crowds interacting through layers upon layers of digital compositing. In a fabulous single take, we see the role luck plays in battle as Jon Snow survives multiple times out of sheer fate. The dragons have now grown up tremendously and we get some truly gratifying shots, up close at that too. Again, Battle of the Bastards sees the dragons freed and destroying the fleet of the masters by spraying fire over them. Visual effects have come a long way from the days of Season 2 where shots of baby-dragons were used sparingly to Season 6 where shots of gigantic dragons are used a bit more lavishly.

It’s weird to say this but on the whole, Season 6 is probably one of the most satisfying seasons of Game of Thrones purely in terms of how much the story advances towards its inevitable conclusion. Whereas other seasons had this meandering quality to them and kept diverging, spreading and expanding the story further and further, Season 6 is our first hint at the showrunners trying to bring things together. Some characters cross paths in immensely satisfying ways (Sansa and Jon / Theon for instance), plotlines are laid to rest and by its conclusion, the season is really focused in its storytelling approach with a possible endgame in sight.

In this For The Throne retrospective series, we take a look back at all seasons of George R. R. Martin’s hit fantasy show Game of Thrones, uncovering new insights, identifying connections and spotting plot points and teases that go on to play an important role in the final season. These posts are littered with spoiler so exercise caution when reading.