The much awaited Battle of Winterfell is finally here. But does it live up to the insanely built-up hype? 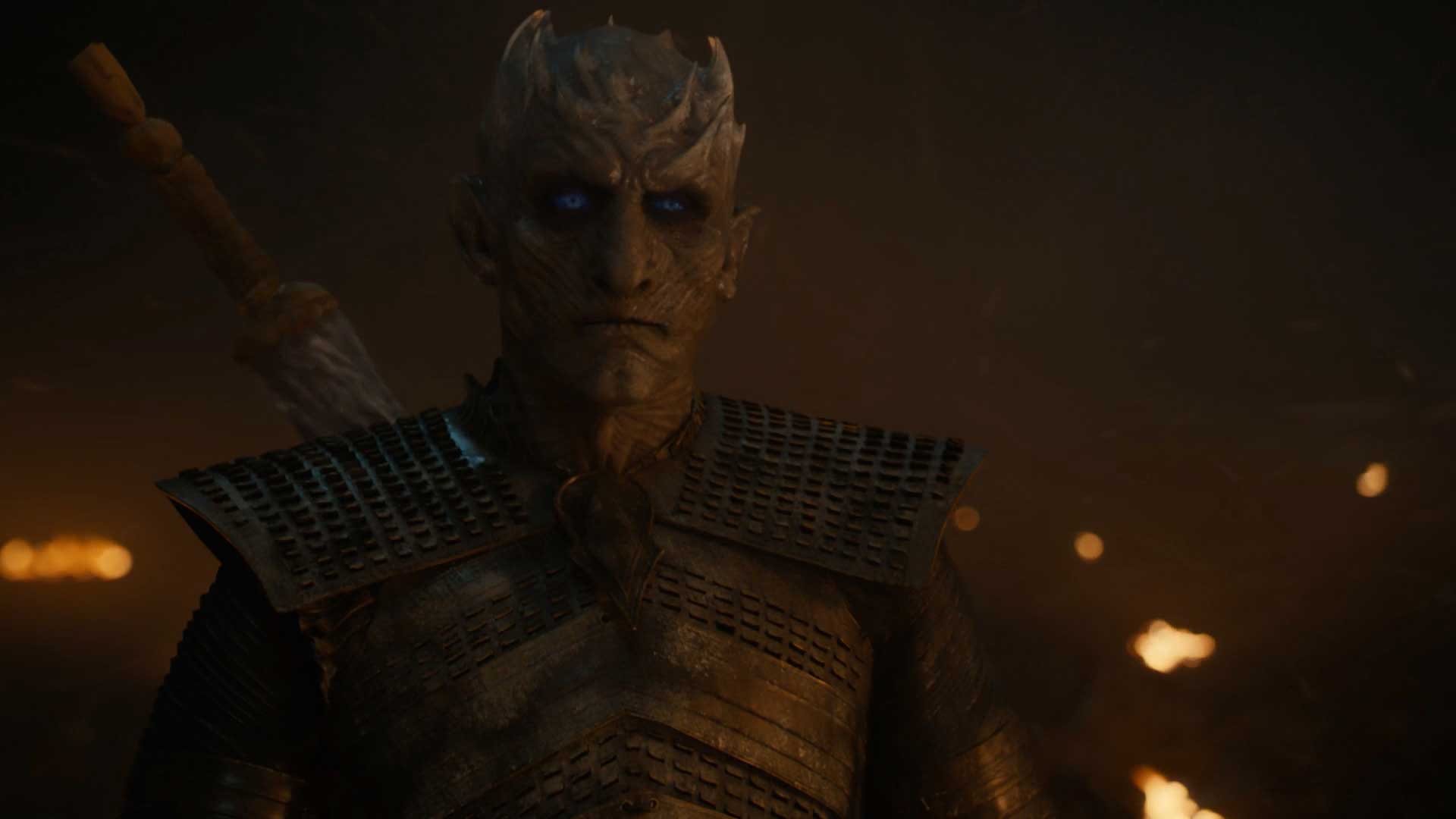 It certainly isn’t an understatement that the entirety of Game of Thrones has largely been building up to this. The Battle of Winterfell, between the living and the dead (or undead) has been promoted as a finale unto itself, despite being only one of two major battles that would close out the Song of Ice and Fire saga. The showrunners have tried their best to make it as impactful as possible. Which is why, even in a shortened season with only six episodes, two were spent building up the clash between the Night King and the Targaryen King / Queen. And expectations were sky-high, when Miguel Sapochnik, director of some of the show’s best and widely acclaimed episodes such as Hardhome, Battle of the Bastards and The Winds of Winter was revealed as the director of this climactic showdown. The lingering question I suppose then is, does the battle live up to the hype.

It does and it mostly does. It presents a scale unlike anything ever seen on the show, or for that matter TV itself. It transcends the small screen and delivers something worthy of being watched in an IMAX movie theater, or at least the highest resolution possible (1080p, maybe even 4K). Hoardes of armies colliding, fighting, scrambling for survival amidst a strong dust storm, dragons dancing in the air, spewing ice and fire mixed with some moments of calm and pondering as some take shelter in the crypts of Winterfell, the battle has many intricate pieces to it that the showrunners cover in quick succession. With pretty much the entire principal cast having descended on Winterfell, the stakes are as high as can be. And the extended running time only gives them more room to play out scenes without rushing through them; at 82 minutes, The Long Night is the longest running Game of Thrones episode to date.

Despite the already established build-up in the first two episodes, Sapochnik adds his own touch by slowly amping the intensity rather than outright jumping into the action. Unlike Hardhome then, where the walker army just charged unexpectedly out of nowhere, this is a fight our heroes have anticipated coming for a while now. There’s a steady undercurrent of tension flowing through the opening scenes and the pulsing music that helps curve up the tension. And a long tracking shot at the beginning helps get a sense of some of the geography of Winterfell while simultaneously conveying the impressive scope and scale accomplished as a result of everyone actually being present on set.

The living put forth all armies at their disposal. There’s the Unsullied, led by Grey Worm, the Kninghts of the Vale who pledged their loyalty to the North, lead by Sers Brienne and Jaime and what’s left of the Brotherhood without Banners and the Night’s Watch led by Gregor Clegane, Beric Dondarrion, Eddison Tollet and presumably Gendry (didn’t see him much during the battle). And finally, there are the Dothraki who charge head-on towards the walkers only to be completely exterminated by the dead, the fires of their weapons extinguished. That the Dothraki are eliminated in one fell swoop instantly helps sell the seriousness and enormity of the threat and is presented beautifully through some brilliant long range shots mixed with chaotic fiery closeups.

In fact, that’s pretty much what the rest of the battle is artfully comprised of. There are some impactful, beautiful looking wide shots involving the hordes of armies and the dragons spitting fire upon them, interspersed with the close shots showing a mess of the living fighting and trying to hold off the dead in whatever way we can. Daenerys and Jon take to the skies to both fend off the walker threat and hunt for the Night King who is now commanding last season’s slain dragon Viserion. Their showdown amidst moonlight is the stuff wallpapers are made off and the striking visuals will linger on closely long after the episode is done. Kudos to acclaimed cinematographer Fabian Wagner for finding order within chaos.

There are some interesting set-pieces that unfold during the battle and, while it’s understandable that little character work is involved in an episode that very nearly features the entire cast, Sapochnik, Benioff and Weiss still give us those smaller, tender moments amidst the crying and screaming. Tyrion and Sansa share some touching moments in the Winterfell crypts, reveling in their short-lived past as man and wife; the fear of dying even brings them a tad closer. I could almost see them getting married by the time the episode ends. Clegane is visibly shaken up after seeing so much fire all around him. Melisandre and Davos exchange some loud glances that speaks volumes about the pain and loss she has caused despite her importance to the big battle. Even Theon, who was largely ignored until now, gets a heroic moment of redemption that would’ve come across a tad too flimsy were it not for the brilliant handling and Alfie Allen’s silently sympathetic portrayal.

All of these are of course secondary characters today. The real episode-stealer is Arya who displays bravery and strength and courage in the face of overwhelming odds, fighing walker after walker with precision, sometimes with skill, sometimes with gut. She sneaks, she roars, and she refuses to give up and bow down to the Night King, never mind the injuries she sustains, never mind bodies upon bodies keep piling up. And after a push by Melisandre, she ends up accomplishing the impossible and fulfilling a secretive prophecy which is just to tantalizing to reveal here. Suffice to say, Maise Williams does some of the best work this season and this should hopefully steer the conversation away from her sex-scene last week which stirred up an unneeded controversy.

This doesn’t mean the episode is perfect though. For one, what I had feared about the Night King came to pass. He ended up becoming a more or less one-dimensional antagonist, a General of Generals whose sole purpose was to plunge the world into darkness by erasing all its memories contained in the Three-Eyed Raven. And Bran? All he did was warged into ravens, presumably to draw or lure the Night King into the Godswood. Which makes little sense because why have everyone go through the trouble of defending the castle and laying down their lives when you wanted the Night King within reach anyway? For a moment, the Night King’s immunity to fire made me glimmer with hope that he was perhaps, Aegon Targaryen (or some Targaryen), Dany’s ancestor, and that the final battle would be one amongst the Targaryens fighting for the throne or something more intriguing along those lines. But alas, it didn’t pan out. None of the theories around the Night King’s origins, motivations and connections with Bran played out which made him just like any other villain. Heck he was no different than Malekith the Dark Elf in Thor: The Dark World and that’s one of the least enjoyable Marvel movies. Not fleshing out the Night King goes down as a huge mistake in my book in the Game of Thrones parlance, unless of course, the final three episodes have something to offer to rectify that situation.

The visual effects were unquestionably great, especially for the scores of armies and blood splatter that we saw and the amount of dragon shots that we got in a single episode (most likely a record). They would undoubtedly be also aided by the episode’s night setting; the dust storm kicked off by the walkers with Viserion’s help darkened what already seemed like a very dark episode. And by dark, I mean brightness not tone. The Long Night had insanely low levels of visibility and while I understand some of it could be intentional to put us into the shoes of the characters having to fight an entire army when they could barely see them marching ahead, it doesn’t take away the difficulty of following certain sequences thanks to the lowered brightness. Even the Battle of Blackwater was set during the night but it had a much better visibility than this final showdown; the night-time setting would’ve certainly helped save a few hundred thousand or million dollars in visual effects work.

Which is to say, all of this, led to what were without doubt some of the most gripping, terrifying final minutes of a Game of Thrones show ever, falling somewhat behind the Red Wedding and Hardhome in shock value but exceeding them in pure artistry. Despite the relative simplicity of the battle’s outcome, director Miguel Sapochnik elevated the final minutes from something of a quick blink-and-you-miss showdown to an operatic piece that, accompanied by Ramin Djawadi’s haunting, melancholic piano composition, took the entire sequence from magnificent to mythic. The choice of letting the tension build up served to convince you that literally anyone could fall in that moment. The final skirmish with the Night King echoes distinctly, yet distantly, the opening of The Winds of Winter with Djawadi’s composition evoking memories of Light of the Seven in how eerily beautiful it is, a harmony of the show’s central themes (including the titular theme) and other tracks, building up to an intense final outcome that no one could have saw coming. Bravado is what that final sequence deserves for it singlehandedly elevates the battle into a hallmark of some of the finest television ever witnessed collectively on a grand scale.

I won’t say I was perfectly pleased with the battle. But I can’t deny that it was pretty close. I was definitely looking forward to learning more about the Night King, or at least some confrontation between him and Bran over why they’ve been engaged on this cat and mouse game for so long. In retrospect, sure, the lack of an origin makes the Night King as mysterious as some of the best villains in history. But this is Game of Thrones and one-sided battles have rarely been a thing here, so it was a bit jarring to witness one knowing almost nothing about what more drove the other side. And to think the cast escaped with less-significant casualties is also somewhat disappointing, although interestingly, a lot more people died in this battle than have traditionally fallen in previous battle-heavy episodes. Which is a good, much-needed thing in the end; war must have casualties.

That said, The Long Night was technically everything a Game of Thrones fans looks for in that traditional ninth episode, delivered ever so early in the third. Despite an extreme run time of 82 minutes, it manages to keep you on the edge of your seat, an extraordinary feat. I’m going to deduct some marks for now for not delving into the Night King’s origin (will revisit the score if something shows up in future episodes) but this was an exhilaring episode and, even at its lowest, is among the finest Television present out there. It would be a crime to watch and experience this on anything less than 1080p.