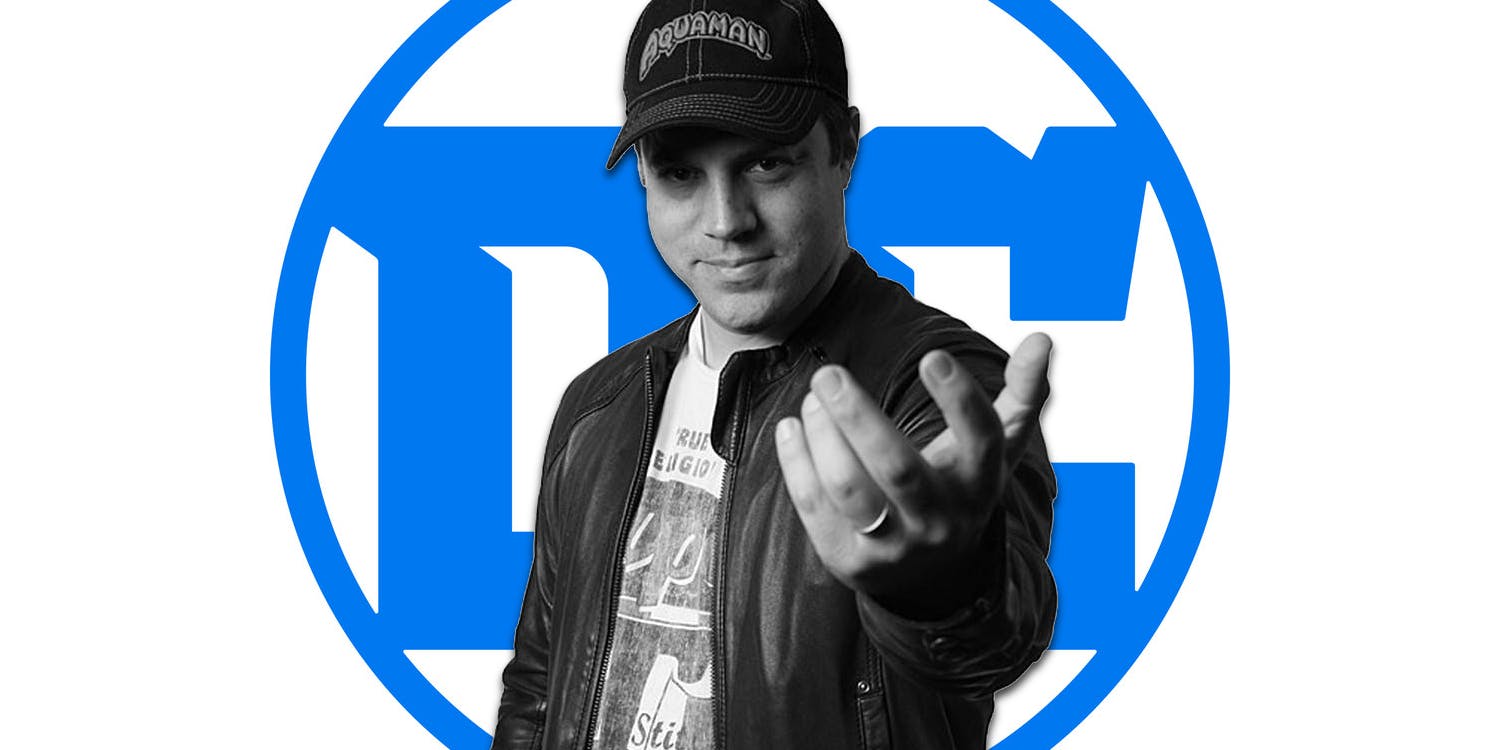 In a major shakeup at DC Entertainment, Chief Creative Officer Geoff Johns has quit his executive position and launched a new production house to focus more on his original passion – writing. Called Mad House Productions, the new studio will be headed by Geoff Johns and associated with developing DC Comics properties. Johns will focus more on writing and creating content for Warner Bros. / DC, including developing existing heroes and re-imagined versions of characters. As part of the new deal, Johns will also write and produce the upcoming Green Lantern Corps.

The news comes on the heels of another executive level decision last week that saw Diane Nelson’s exit, to whom Johns reported. Earlier this year, Walter Hamada was brought in as President to oversee DC’s movie slate and lay out the plan after Justice League. Johns himself has been actively involved with DC, having co-written this year’s Aquaman as also next year’s Wonder Woman 2 which is set to begin filming. In a statement in the official press release, Johns implied that his executive duties were interfering with his passion for writing which is why he decided to take a step back.

I took on a role at DCE [DC Entertainment] because I love the characters and this universe more than anything. But, I want to spend my days writing and on set. I’m thrilled to get back to a more hands-on creative role. It’s a dream job on dream projects, reaching even deeper into DC’s vast pantheon of characters.

Warner Bros. group chairman Toby Emmerich who installed Hamada at DC and to whom Johns reported had positive words to shower on Johns’ decision, while also looking forward to the newfound association with them.

Geoff is a super-talented writer and truly embedded in the DC Universe and its characters. We’re thrilled that he’s returning to his passion and his roots as a writer and producer. And, it’s even better that he’s staying in our Warner Bros. family. We look forward to working with him on Green Lantern and other projects going forward.

In John’s absence, publisher Jim Lee will take on the responsibilities of the Chief Creative Officer and also continue to act as publisher alongside Dan DiDio, a position the duo have held since 2010.

Johns has helped DC immensely in reinventing some of its more outdated characters like Aquaman, Teen Titans and Shazam while also writing Green Lantern for 9 years. He was also responsible for major contributions in launching DC’s TV-verse comprising of such popular shows as The Flash, Arrow, Supergirl, Gotham and now Titans. His role was elevated to assumed prominent responsibilities in the DC Entertainment Universe after the poor reception to Batman v Superman: Dawn of Justice. Consequently, Johns worked closely with director Patty Jenkins on Wonder Woman which turned out to be one of the DCEU’s best (and only) successes.

To be clear, this news shouldn’t be taken in a negative light, at least not yet. While Johns is indeed exiting DC Entertainment, he’ll still be developing and working on DC properties only, just under a separate banner. Until this association parts ways, there’s no reason to worry. And seeing how much involvement Johns has had with DC’s characters in the past, it doesn’t look like this association will fade anytime soon.

Here’s the complete press release for your viewing:

June 11, 2018 – Burbank, CA — Geoff Johns is launching Mad Ghost Productions and is entering into an exclusive writer/producer deal with Warner Bros. and DC Entertainment to create content across multiple divisions of the Studio, including films, television and comic books, based on current DC properties as well as new and reimagined IP. As part of this deal, he will segue from his executive post as President and Chief Creative Officer of DC Entertainment to focus on creative matters full-time. DC Entertainment Publisher Jim Lee will expand his role to include the Chief Creative Officer title and responsibilities, and will continue to act as Publisher together with Dan DiDio as they have since 2010. These announcements were made today by Thomas Gewecke, Chief Digital Officer and Executive Vice President, Strategy and Business Development, who is serving as DC’s interim head.

Under this new deal, one of Johns’ first film projects will be Warner Bros. Pictures’ “Green Lantern Corps,” based on his New York Times bestselling series that saw an impressive nine-year run, spawning additional spin-off titles and comic book events. Johns will write and be a producer on the film. Additionally, he co-wrote and executive produced “Aquaman,” which releases worldwide December 21, and is writing and executive producing the second installment of the “Wonder Woman” franchise with director Patty Jenkins, releasing in November 2019. New Line’s “Shazam!,” slated for an April 2019 release, is based on his original graphic novel.

On the television side, Johns co-developed and is executive producer and writer on the first original series for the upcoming DC Universe digital service, “Titans,” with Akiva Goldsman and Greg Berlanti. Johns also wrote the “Titans” episode “Doom Patrol” that is spinning off into its own 13-episode original series for the digital service. He is executive producing alongside Berlanti, Sarah Schechter and Jeremy Carver. He has also been crucial in helping build the DC television empire and co-developed The CW’s most successful superhero show, “The Flash.” Alongside Peter Roth and WBTV, he has helped launch over a dozen additional hit television series such as “Arrow,” “Gotham,” “iZombie,” “Supergirl” and “Black Lightning,” among others.

His publishing projects will include a new pop-up slate of comic books under the banner of “The Killing Zone” focusing on new and lesser known DC characters and titles. Johns will also be writing a Shazam! comic book series scheduled to be out in the fall. In addition, he will continue to write the commercial and critical hit “Doomsday Clock,” a comic book series illustrated by Gary Frank that collides the DC universe with the Watchmen universe, as well as the upcoming “Three Jokers,” illustrated by Jason Fabok.

“Geoff is a super talented writer and truly embedded in the DC Universe and its characters,” said Toby Emmerich, Chairman, Warner Bros. Pictures Group. “We’re thrilled that he’s returning to his passion and his roots as a writer and producer. And, it’s even better that he’s staying in our Warner Bros. family. We look forward to working with him on ‘Green Lantern’ and other projects going forward.”

“Geoff is one of DC Comics’ most prolific writers, and we can’t wait to see what he does next now that he will be dedicating 100 percent of his time to telling the best DC stories possible across all media,” said DiDio and Lee. “The new publishing projects we are working on together will be instant fan-favorites.”

“I took on a role at DCE because I love the characters and this universe more than anything. But, I want to spend my days writing and on set. I’m thrilled to get back to a more hands-on creative role. It’s a dream job on dream projects, reaching even deeper into DC’s vast pantheon of characters,” said Johns. “I’m also excited to continue to work with the amazing team at DCE and my colleagues at Warner Bros.”

As one of the most successful comic book writers of his time, Johns has built his career on re-inventing dormant characters to commercial and critical successes as seen with “Green Lantern,” “Aquaman,” “Teen Titans,” “The Flash” and “Shazam!”, among others. His gravitation toward lower-level characters with unexplored and untapped potential has led to Johns currently holding the No. 3 spot on the 100 most prolific DC comics writers list next to comic book legends Robert Kanigher and Gardner Fox.

Johns’ impressive career history dates back to his beginning as an assistant to filmmaker Richard Donner. He established himself as a successful writer and rode the ranks to become President and CCO of DC Entertainment while simultaneously creating some of today’s most popular film, television and comic series.