Gotham wraps up its No Man’s Land saga, concluding the episode with some Batman related setups. 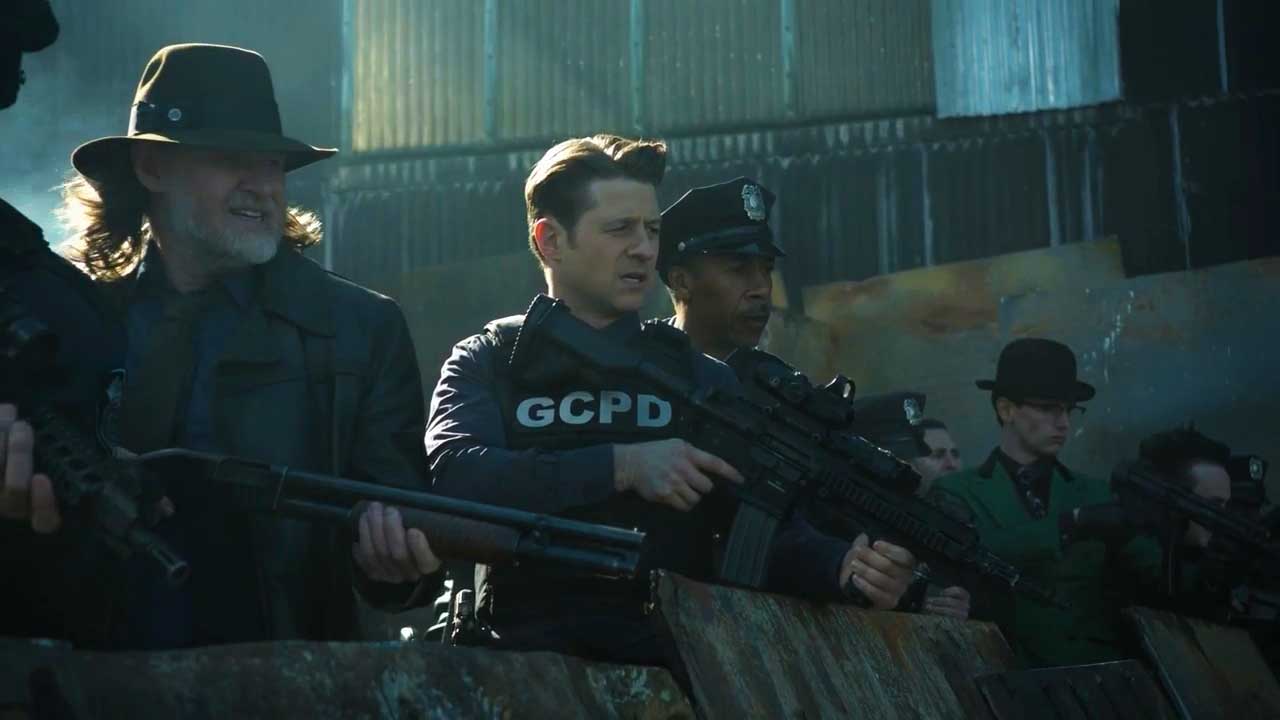 The penultimate episode of Gotham‘s Season 5 wrapped up the No Man’s Land saga mid-way as the remainder of the episode set the stage for some well-known Batman-related setups. And as much as I do not wish to say this, seeing the origins of some of those iconic Batman universe moments was the coolest parts of the episode, with the entire siege of Gotham City coming across as tepid in comparison.

After last week’s developments, Nyssa Al-Ghul is out for revenge, and wants to see Gotham burn, though I wonder in its current state, what more damage can you cause an already dilapidated city. An attempt is made still, with Bane-prototype Eduardo commanding an army of Gotham’s soldiers who really don’t want any blood but are set up to follow orders. This is important in how the conflict resolves itself, even if that resolution is wonky and goody-goody at best. It almost feels as though the city is confined to a population that could easily fit in two blocks given how every other scene is set around the GCPD.

There are some good bits to the skirmish as well, even if they arrive amid gallops of cringe. Bruce taking a cue from his arch-nemesis Jeremiah’s plan is a great foreshadowing of the relationship that the Batman and the Joker go on to share; despite their stark differences and opposing idealogies, they do inform each other’s developments and complete each other. Also cool was Bruce and Selina fight Bane even as the venomed Eduardo should have been able to take them down much easily. The said fight sequence also gives us the debut of bats on the show as they help take down Bane, even though their appearance feels a lot less earned than in the movies.

Gordon himself is part of a clumsy rescue attempt to save Barbara, although it looks more like Barbara saved himself. The entire subplot with Nyssa is dismissed in hush-hush capacity, much like the one with Talia was at the end of The Dark Knight Rises and the similarities between the movie and this season could probably spark an entire write-up in itself. And while it’s incredibly satisfying to see the Penguin and the Riddler fight side-by-side with the good guys, it’s equally frustrating to see their descent back to the bad side so quickly. It almost felt as if Gotham forgot it had setup a pivotal moment at the beginning of Season 1 and rushed to fulfill that setup before reverting the characters back to who they really were. That said, the Penguin and Riddler have really gotten a lot of exposure on the show as villains and their development over the course of five seasons as both characters and in their dynamics has been a delight to witness for comic book fans.

It’s the final bits though where the show begins connecting itself to the more well-known Batman mythos that Gotham really shines and saves the episode from getting a less-optimal rating. Whether it’s Gordon finally earning the Commissioner tag (even though it comes too early), or naming his daughter Barbara-Lee Gordon, the future Batgirl, Gotham ends on a heavy doze of setups that every Batman fan must be itching to get a hold of. Also interesting is Bruce’s realization of him being the chief cause of Gotham being in ruins due to all the crazed maniacs coming after him for some reason. This sets him up on the path to be the Batman and he departs for good, leaving Selina hanging dry with just a note which I suspect would cause her to drift partially into madness and become the dodgy Selina Kyle we know from the comics.

The scale of the episode is worth mentioning. The producers go all out in giving Gotham a full movie-esque treatment and it shows in sequences and wide-shots of Gotham City burning, as well as a heavyduty action bit involving the Wayne Tower collapsing. Those do add a lot of credence and atmospherics to Gotham’s environement and I’ve always maintained that Gotham the show, does a great job of depicting the geography and ruins of Gotham City; it really convinces you that the city is a bad place to live in. That all the characters generally appear tip-top in their appearances, with Ben Meckenzie’s Gordon in a suit that’s barely tarnished or ever so undergoes a scratch after all the fighting he does serves to take you out of that otherwise well-created ambience a bit.

On the whole, Gotham‘s penultimate episode wrapped things up neatly, leaving viewers wondering what’s in store for the final episode. I’ve heard there’s to be a 10-year time-jump but I’m too averse to spoilers at this moment and just want to witness it first before I dive headlong into theories and discussions. There were some good bits, and the Penguin got some great dialogue in explaining his motivations to fighting beside Gordon (that was some solid, poetic writing there) but overall They Did What? relied a lot more on the iconic setups to sell the episode, quickly dispensing the siege of Gotham.

I’ve been a little late to catch the episode thanks to other committments but rest assured, I write this without having seen the final episode.