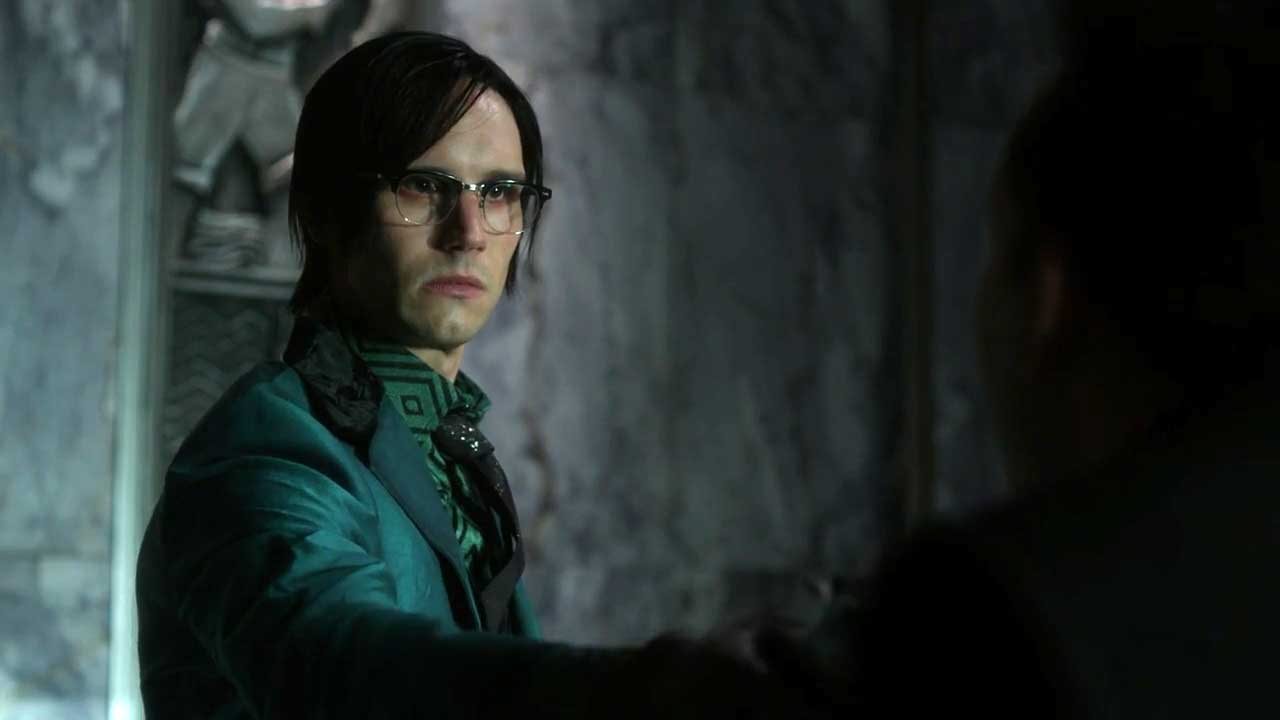 Gotham is probably the single-most show where an episode can simultaneously have parts you like as well as parts you loathe. This one was no different; there’s a lot to like, maybe even love here and there’s a lot to be angry about. And it’s quite an eventful episode on the whole, bringing back Doctor Strange into the mix (no, not that Doctor Strange, the other Hugo Strange) even as Ed Nygma once again comes to the spotlight for his indirect role in the “Haven” explosion.

Let’s start off with the good stuff. Ed Nygma’s denial of having anything to do with the situation Haven lands him in some interesting spot. One of these sees him trap Jim Gordon and his newly introduced long-time buddy Eduardo in his puzzles, which Gordon successfully wrestles out of. I mean, there was not even an iota of doubt that Gordon wouldn’t make it but it still managed to be a tense sequence regardless. There’s another really heartfelt sequence between the Penguin and the Riddler, old friends who even shared a bit of a romantic history, with Oswald having fallen for Nygma in the past. And even though it isn’t said out loud in the episode, Robin Lord Taylor just nails the Penguin’s performance resulting in a lot being conveyed but not being said about the affection he still feels for Nygma, who himself is completely oblivious to Ossie’s feelings. Sob Sob.

Our own Harvey Bullock gets a moment to shine as well when he and Jim’s ex-army buddy surround and take down a host of Penguin’s henchmen. There’s an inexplicable swagger and confidence around Harvey challenging Penguin in that scene that’s just delightful to see; it’s good to have Harvey do stuff once in a while and as he himself complained to Gordon, it’s about time he went on the field more often. He also gave a small pep-talk to Brucey at a time when he needed it, although that didn’t hit as hard as it should’ve. Still, ole’ Bullock’s got a fight in him and I can’t wait for that climactic showdown teased at the Season’s premiere.

Now for the bad bits. Yes, Hugo Strange is back and he’s every bit as calculating and conniving as he’s been portrayed all this while by the excellent B D Wong (not to be confused with Doctor Strange actor Benedict Wong). Even so, his introduction turns the entire subplot around Nygma into a very simple problem; that Nygma was remote controlled all this while. Poof, gone is the moral dilemma that Nygma was wrestling with all this time and had the potential to battle with his dual identity being a mass murderer. The revelation just squanders that opportunity and leads it down the drain and we’re left with a simple chip in the brain implant that was the problem to begin with. So everyone’s responsible and no one’s responsible. Yay.

The other disappointing bit is how the Selina-Bruce storyline was handled. It didn’t progress anywhere, rehashing previously material when Bruce was the drunk one after murdering Ra’s Al Ghul and Selina was consoling him about who he really is. This time it’s the other way around with a been there, done that result. One could’ve pretty much omitted their bits and the episode would still have not lost anything. And just so it wasn’t enough, Jeremiah wasn’t really murdered but faked his death, probably to make Selina feel guilty. It’s kind of a Dark Knight Returns moment in that the Joker kills himself in that comic to frame the Batman for murder but it doesn’t work here because it just feels so last-minute contrived. I mean, how do we account for the stab sounds that came as though Selina was actually hitting Jeremiah’s flesh? Bad.

And lastly, the Gordon-Barbara romance that was reignited last week with a steamy kiss shared between the two at the episode’s end lead to … nothing. It’s as if it didn’t happen; there was no acknowledgement, no remorse, no emotion affected due to the reunion. It’s like the writers just threw the scene for provoking strong emotions but had no intention of following up with it. Let’s hope they remember to address it the next time around.

Like I said at the beginning of the review, this week’s Gotham was a mixed bag. A lot of parts were laughably bad, downright anger-inducing even. But then there were some good moments too and it came from the more unexpected of places. Then there are the fun weird moments, such as a family dousing Nygma with electric shocks over the death of their dog; it’s a brilliantly conceived piece of side-plot that highlights the crazy world we live in. Those moments are what save this from becoming an outright disaster of an episode and make it a bearable, at times even fun watch.

And there’s a hilarious exchange between Gordon and his former buddy that stayed with me through the end. Upon being asked, “you left the army for this?”, Gordon replies nonchalantly, “It kinda grows on you”. Touche.

Avengers: Endgame Still Clocking In At 3 Hours, No One Got Up In 3 Out Of 4 Screenings