Gordon teams up with Nygma and Barbara as we get our first look at Bane and Magpie. 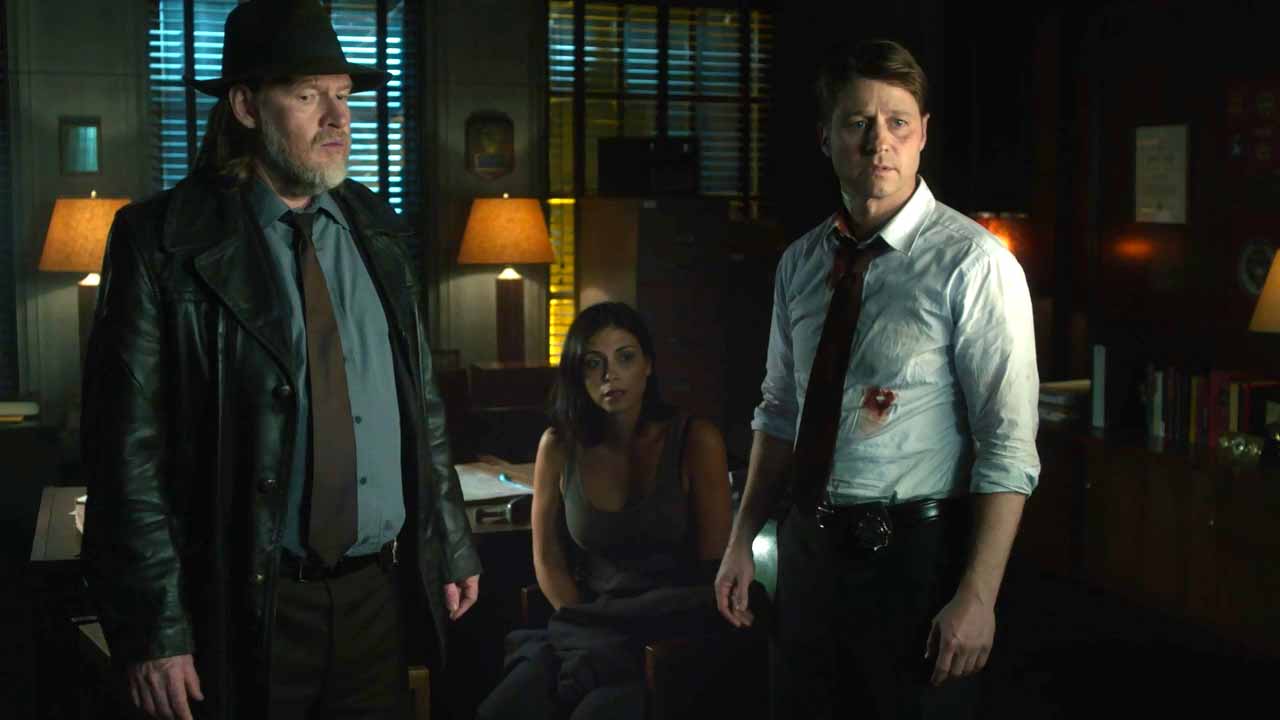 This was a rather busy episode. A lot went down in 13 Stitches and yet, most of it was centered around a singular narrative thread. There weren’t many subplots and still, pretty much everyone from Gordon and Barbara to Nygma and Oswald had something to do. I guess that’s down to the storylines converging, particularly that of Ed with the rest of the cast as Oswald remained the only player pursuing his own course of action. And amidst this packed hour, Gotham introduced us to its version of Bane and Magpie while hinting at greater things to come from Jeremiah.

Let’s start off with the main story. As ridiculous as it seemed last week, it appears remote controlling Nygma through some tinkering by Doctor Strange is the direction they’re headed with. That way, every one of the show’s leads is washed off from having committed the atrocity of blowing up Haven. 13 Stitches begins with a “tense” chase between Gordon and Nygma and if memory serves me correctly, this is the first time Gotham has used shaky cam to depict any sequence. It ends in Nygma getting knocked off by Gordon before being taken to Lucius who operates on him to get the chip removed, bringing an end to the Terminator Riddler.

The incident however brings both Barbara and Nygma in Jim’s inner trust circle, at least momentarily as the trio embark upon the episode’s major set piece. Eduardo has a bargain chip that he’s using to trade in for the real chip and it’s important enough for Gordon and co to consider hatching a plan, one that involves broadcasting the chip’s contents before handing it over. As to why Eduardo has the upper hand, it’s Lee Thompkins. Yes Morena Baccarin’s back after a prolonged absence and I feel her pain when she struggles to remember what she last did in these weeks gone by (I do as well). Her reunion with Ben Mckenzie should be a bittersweet moment for the real-life couple. The exchange ends in a brutal fight that leaves Eduardo impaled as Gordon walks off.

The other side to this skirmish sees Nygma, Barbara and Bruce Wayne work in coordination to hold off the cops and broadcast from the largest antenna in Gotham City: the GCPD’s rooftop. The entire piece is a bizzare but entertaining set and Harvey Bullock hilariously spoils Nygma’s plan of holding off Eduardo’s mates with a bomb-riddle; Bullock ends up answering the riddle himself. Bruce holding up the lone guard as Fox asks for his status also reminded me of a similar situation between Phil Coulson and Black Widow in the opening moments of The Avengers. Fortunately, it all ends well for everyone and they now have Lee which is going to create an interesting tension now that Jim’s gotten back with Barbara. The writers themselves realize this and don’t waste too much time either; by the episode’s end, Barbara reveals she’s pregnant with Gordon’s child in front of Lee. Again, Bullock gives a hilarious reaction that I’ll let you savor in the episode itself.

Oswald and Selena team up to pursue a small time thief, Magpie. During her introduction, I for a brief moment thought perhaps she’s the real Harley Quinn. But then this is Gotham and pretty much every other character can be as insane as the real Harley, so it’s not unusual to see this blonde haired girl talking all chirpy bouncing around. So we have a bubbly Magpie who somehow manages to sneak in bombs that look like ordinary objects that has held Penguin on a leash and stolen his diamonds. The unusual thing is to see Penguin shoot her dead once they find her; I was seriously hoping she’s a new introduction that will play off for a few episodes at least but Gotham takes the brave step of bringing forth, then getting rid of a brand new detailed character. All that effort for just one episode? Bravo?

The mystery women orchestrating everything finally makes her appearance and hands Eduardo a venom-injecting mask to survive the impalement. That’s right, in this show’s alternate universe, Eduardo is our Bane. Far from the hulking, menacing personality that Tom Hardy was in The Dark Knight Rises but hopefully aggressive enough and simultaneously calculating to deliver a worthy fight to Gordon (Bane’s too old to fight Bruce at this stage). Which kind of makes “Walker” herself Talia-Al-Ghul assuming a convenient pseudonym, and takes the season’s plot even closer in spirit to Nolan’s Rises than any other Batman adaptation.

The thing about Gotham is that its illogical ridiculousness is at once its biggest strength and weakness. It makes the show out of consideration to be compared against such greats as The Sopranos, The Wire or even say Breaking Bad. And yet, this attitude takes it closer to the crazy world of DC Comics. It develops a certain atmosphere with its storylines that is at once fun and engaging but far removed from the serious, dramatic cinema that would earn it critic accolades. And yet, it strays away from being B-grade levels campy, at least in its recent installments. This episode can pretty much be summed up by these traits which will sit well with you or leave a sour taste in your mouth depending upon the kind of Television you’re looking for.

And at this point, it’s safe to say Bruce Wayne has been sidelined in his own show. Then again, the show was probably titled Gotham and not Wayne for a reason. A fun outing overall.

Avengers: Endgame Tamil Version To Be Penned By Ghajini Director A. R. Murugadoss