Gotham comes close to the Joker’s definitive origin story in a thrilling episode. 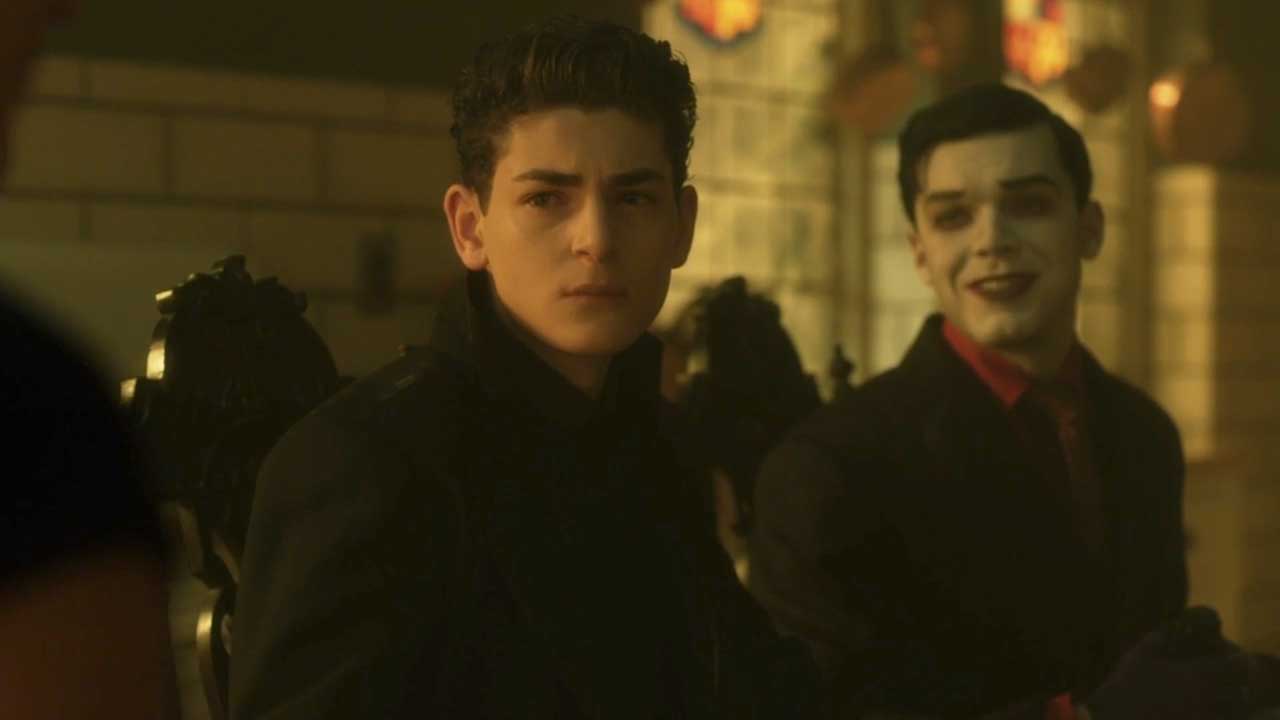 It’s no secret at this point that Cameron Monaghan is Gotham‘s trump card. Whenever his proto-Joker is brought into the fold, it’s as if the show elevates its writing and storytelling to match his menacing performance as the Clown Prince of Gotham City. As you can guess by the episode title, this week we came pretty close to getting the Joker origin story we’re all familiar with from the comics. And even as the other players carry on with their own sweet subplots, everything feels inconsequental compared to Jeremiah and Bruce’s storyline.

Let’s pick the most engaging one to dissect them. In a scheme that had brilliant potential, Jeremiah got an elderly couple to dress up as Bruce’s parents Thomas and Martha Wayne. With a little bit of “plastic surgery”, Bruce suddenly had his lost family standing in front of him. Jeremiah’s evil trick is to have Bruce relive the night his parents died and yet, somehow be a part of Bruce’s most eventful night. To pull this off, he has to naturally reveal himself to Bruce. Therein lies my biggest gripe with his plan, especially with the timing. Jeremiah could’ve easily had Bruce believe his parents, the hypnotized Alfred, the subplot were real and it would’ve had a truly traumatic effect on Bruce, seeing them real and then taken away from them. But instead, Jeremiah makes it clear from the onset that this is part of his dastardly scheme. I mean, why go through all the trouble if you’re going to spoil it yourself anyway?

That gripe aside, the plan works for a totally different reason. Because Jeremiah has made his intentions clear, it makes for some interesting exchanges between Bruce and Jeremiah. This strongly echoes the Batman-Joker dynamic from both the comics and the movies where the Joker constantly berates Batman into hating or killing him. That they’re connected and inseparable is a fact not lost on the Joker and Monaghan relishes the opportunity to inflict a sense of dread upon old Brucie. It also inches him closer and closer towards the canon Joker until the eventual conclusion of this arc.

It’s safe to say (mild spoiler alert) that Jeremiah fails to kill Bruce’s parents thanks to some timely intervention by Selina. Of course Jeremiah does manage to blow up Wayne Manor in a truly bad (yet ambitious) display of CGI. A skirmish between Bruce and Jeremiah takes place inside the Ace Chemicals factory and ends with Jeremiah falling into the chemical dump. He’s alive naturally, completing his origin as the Joker, which I hope they’ll now reference by name at least once when the Season comes to a close. I also thoroughly enjoyed Jeremiah’s spin on the Mask of Zorro. A fine story there aside from some cringey moments.

Everyone else does get involved in the subplot to mixed results. Lee and Gordon have some catching up and reconciling to do, with things being more complicated thanks to Barbara’s pregnancy. The duo still make it up but not before being captured and hypnotized by Jarvis Tetch. In a dramatic twist of tale, Jeremiah presents and dresses them up as Bruce’s parents, which makes sense at least in Gordon’s case considering the father-figure he’s been to Bruce all these years (aside from Alfred of course). It’s comical how Tetch is able to hypnotize people with specifics; for instance, Lee’s hypnotic spell is “programmed” not to be broken until her pearl necklace is taken off. Throw in some Harley Quinn madness and you got yourselves a supervillain team-up.

And speaking of team-ups, Nygma, Penguin and Barbara finally settle their differences (or at least put them aside temporarily) to build a submarine to escape the river minefield. Penguin’s storyline was quite weak this episode and they could’ve left him out and chosen to focus on Bruce-Jeremiah without much impact. But Gotham does feel the need to squeeze everyone in at times, even when it can do without them. Gotham is also doing some odd-pairings and that’s also how we got Penguin-Selina together.

What it looks to me, especially after watching Ace Chemicals is that Gotham is making some effort toward converging its alternate universe with comic canon. It’s taking the most well-known bits from the comics and altering their past but could very well end the show by bringing the characters in exactly the state and mindset they’re most commonly found when any comic storyline begins. Thus Jeremiah will finally complete his transformation as the Joker (he even used the term “joke before falling), Lee will probably die and Barbara’s pregnancy will bring Jim back to her and Bruce is going to end up donning the cape. The status quo then could be reset by the Season finale to take us to the official DC Comics storyline.

On the whole, the Jeremiah and Bruce bits made this episode an interesting and fun watch. The entire spin on Jeremiah wanting a part in Bruce’s history by killing his parents again was a stroke of genius to merge both, stories where the killer of Waynes is Joe Chill (read: some random thug) and stories where the Joker ends up killing Thomas and Martha Wayne. Expectedly, the rest of the subplots couldn’t quite match up to what this proto-Joker had to offer but it turns out, it didn’t matter. The Joker-centric subplot was enough to make this episode a fun watch.

The Road To Avengers: Endgame – Captain America: The First Avenger