Peace in the times of The Penguin

Peace in the times of The Penguin 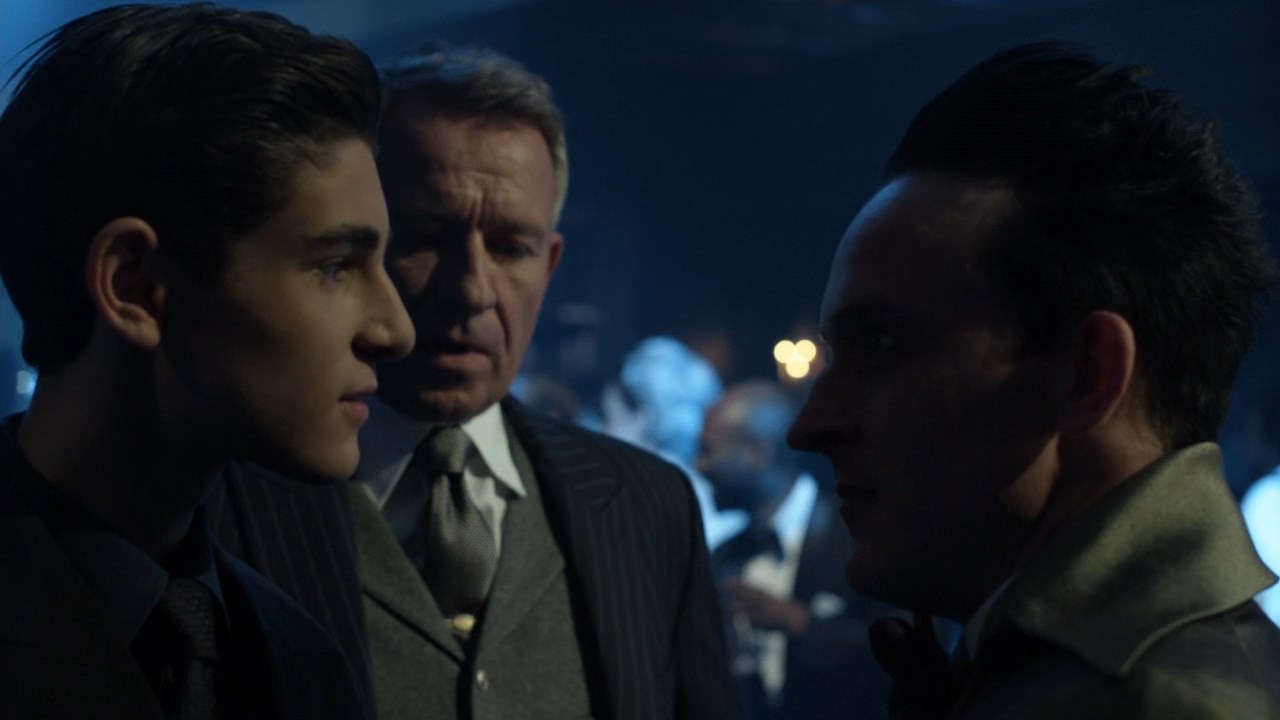 It seems like yesterday that Gotham wound up its Season 3 with a two-part finale that introduced us to Ra’s Al Ghul while also giving us some of the biggest spectacle ever seen on the show. The finale also came very close to giving us a vigilante crime-fighting version of Bruce Wayne with a crude mask, cape and all. Gotham returned this week for a fresh run of 22 episodes and with the first few batch of episodes subtitled A Dark Knight, the show’s clearly not shying away on its promise of bringing us Batman elements sooner than we may be ready for.

This week’s episode begins with a rather interesting premise – organized and controlled crime. With Gotham known for being a haven for criminals, and with the incompetent G.C.P.D. repeatedly having failed in its mission to control crime, The Penguin comes up with a rather ingenious solution to bring down crime rates: ensure only professionals worthy of committing crime are able to do so by issuing licenses to people to commit crimes without anyone stopping them. Go on a crime spree without one and you’ll have Victor Zsasz gunning for you in no time. As twisted as this scheme sounds, it actually works and Gotham records a historic low in crime rate which, for a city where someone being mugged is considered routine stuff, is a noteworthy achievement.

This scheme of The Penguin’s puts him at odds with several people, whom he tackles one by one. We first have The Mayor himself, who Oswald immediately convinces to be a part of this scheme by promising him a certain cut earned from the issuance of licenses. Next up, and more importantly, is Jim Gordon. The righteous Gordon finds it hard to believe that such a concocted scheme could actually work and struggles hard to come up with an argument to explain its fallacy. Not only is he shot down by his comrades in the G.C.P.D., who he comes to blows over the issue, but he’s also asked to calm down by his longtime ally and now captain of the police force Harvey Bullock. So far, licensing crime seems to be without any demerits but Jim brings out an interesting point that I bet will be explored in the future episodes (or at least I hope it is): What if Penguin starts issuing licenses to kill? 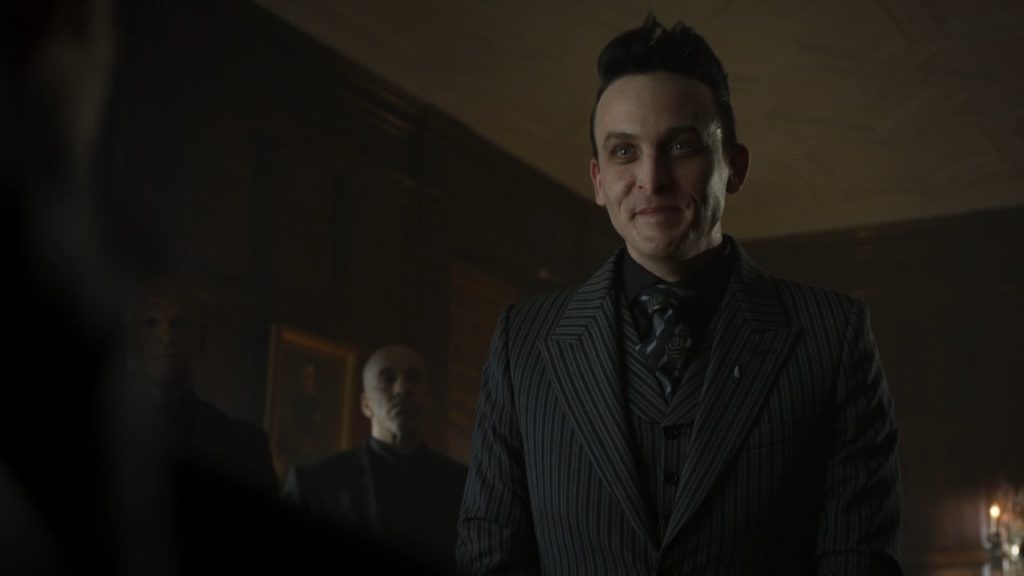 The third person affected by this idea is a small-time crook Merton who along with his comrade Grady and a bunch of other twats first attempt to rob a wedding in progress, only to be stopped by Zsasz in the episode’s opening moments. Determined to commit their robberies even without a license, they seek help from the fear toxin developed by Dr. Crane and passed on to his son Jonathan back in one of the Season 3 episodes. They bribe the Warden and take Crane in a desolated place asking him to develop more of the toxin, which they then use to rob a bank rather conveniently. This puts them in the crosshairs of the Penguin who now needs to stop them anyhow to uphold the status assigned to his issued licenses.

The fourth character affected by this, albeit not as much as the others is Bruce. Having begun showing signs of a proto-Batman, Bruce has become remarkably more composed in his demeanor now. And while we’re quite far away from seeing a Batman operating in full gear, this run of Bruce as the crime-fighter should be an enjoyable one. We also get to see the makings of the classic Batman-Gordon relationship in one of the best and most comic-book accurate sequences of the show where Gordon, with a glass of drink in hand is sneaked upon in the police precinct by Bruce who offers him some advice on how to possibly tackle the license situation by baiting Penguin into revealing a list of people who have the licenses. Gordon’s clearly startled seeing Bruce there, remarking something on the lines of “I didn’t see you coming”. The sequence ends pretty much the same way, with Bruce having “vanished” as soon as Gordon turns his head away. 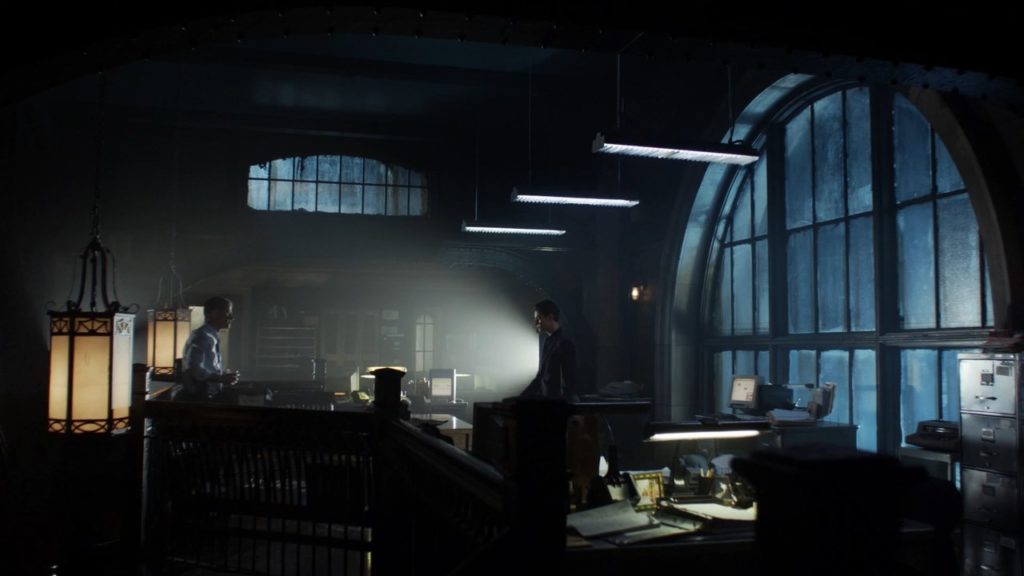 But while the above sequence is entertaining to watch, it highlights a problem with the series which at least I’ve had: the show’s less than subtle nature. Honestly when Bruce snuck up on Gordon the first time, the point was made – Bruce is getting sneaky. There was no need of making it a second time in the same scene within the span of a minute or two. Likewise, when Penguin explains the show’s title in the Iceberg Lounge, it really wasn’t necessary; some mystery would’ve meant a rise in the searches for Pax Penguina which would’ve been undeniably interesting to behold. While the show’s using a lot of elements from the comics and the movies, it clearly isn’t as subtle as those other media were with them.

Speaking of movie references, if last Season’s fear gas release wasn’t enough of a reminder of the climactic skirmish with Ra’s Al Ghul in Batman Begins, this season premiere continues the inspiration by giving us a Scarecrow quite similar to the one in Nolan’s first movie featuring The Caped Crusader. By the end of the episode, we have Jonathan Crane as the Scarecrow in full gear and a nemesis that I hope stays at least until the end of this subtitled story-arc.

Elsewhere, while Bruce is beginning to show signs of Batman, Selina is beginning to resemble an early version of Catwoman with the whip-leash and all. Now working with Tabitha, Selina is looking to raise her game in the world of crime as well by seeking a license of her own, setting her on a collision course with Bruce. It’s interesting to see that when the two walk over a rooftop, Bruce is the more stable of the two with Selina’s legs constantly shivering. An interesting change of contrast. Down in the club, Gordon has successfully baited Cobblepot to catch the gang by taunting him that they’re unafraid of him. Penguin almost has the gang when Ivy, flipped by Penguin’s attitude towards her, switches off the lights allowing the gang to wreak havoc and spray Pengin with the fear gas, leading him to hallucinate a monstrous Edward Nygma. That’s where Gordon comes in and saves the day, while also managing to prove the necessity of the police. 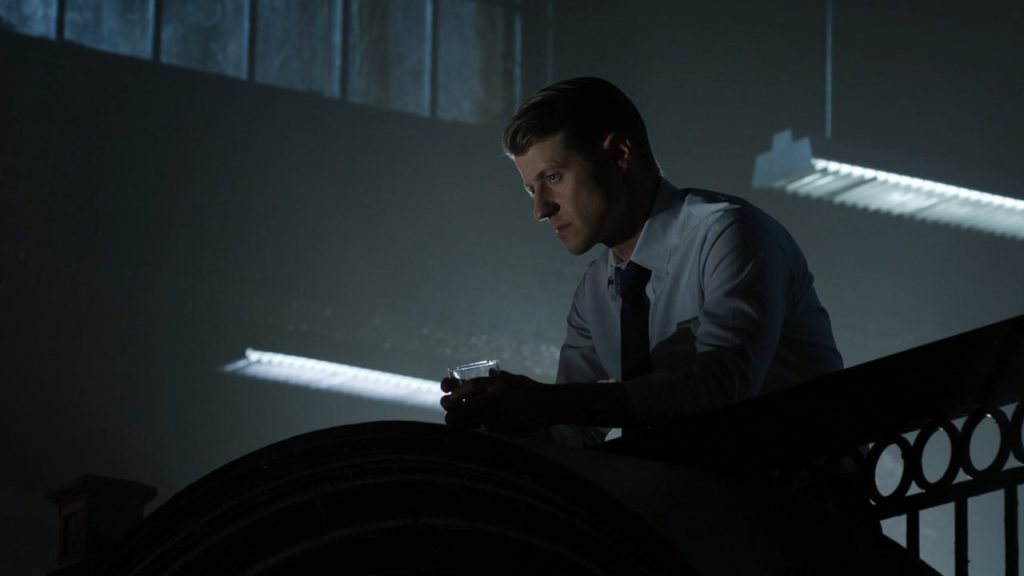 All said and done though, there’s still more needed to convince viewers of Gordon’s side of the argument. The interesting thing about this entire plot device is that Penguin could actually be right. What if the best way of fighting crime in a city as horrid as Gotham is not trying to admonish it entirely but by controlling it, so that only a select few have the authority to commit crime. Since crime can anyway not be eradicated, this at least ensures only a few are able to commit it. It’ll be interesting to see hence how this plays out over the course of this show but I for one certainly enjoyed this episode and am expecting some great twists and plot points in the episodes to come.