Iron Fist brings all its characters under one roof in an otherwise slow burn episode.

Heart of the Dragon was a particularly slow episode and didn’t accomplish much in terms of plot movement, except for bringing the entire cast of characters under one roof by the time it ends. Davos has acquired the Iron Fist and is wreaking havoc upon criminals, seemingly intent upon eliminating crime as quickly as possible and at any cost. Danny is taken in by the Hatcher Triads and subsequently by Colleen and a truly badass Misty, as the duo also bring in Joy and Walker to Colleen’s safehouse.

Misty’s role was far better this episode than it was the previous time around. While this Misty still feels a bit different and less strong, perhaps due to the writing, she’s still handing it over to the criminals. This episode also helps explain her suddenly turning up all by herself; she’s on vacation, deliberating over an offer to head Harlem’s police department which she received at the end of Luke Cage Season 2. This also sets the show after the end of Luke Cage, making Danny’s anger issues in the season premiere a bit perplexing.

Speaking of connections, I like how intertwined these Marvel Netflix shows are among themselves and how they play around each other. Danny’s chief motivation for roaming the streets and protecting New York City is driven by Matt Murdock’s handing over of his responsibility. And when an injured Danny requires medical assistance, Claire is the first name that comes to mind, before Misty shoots it away thanks to her falling out with Luke (and contract negotiations of course). 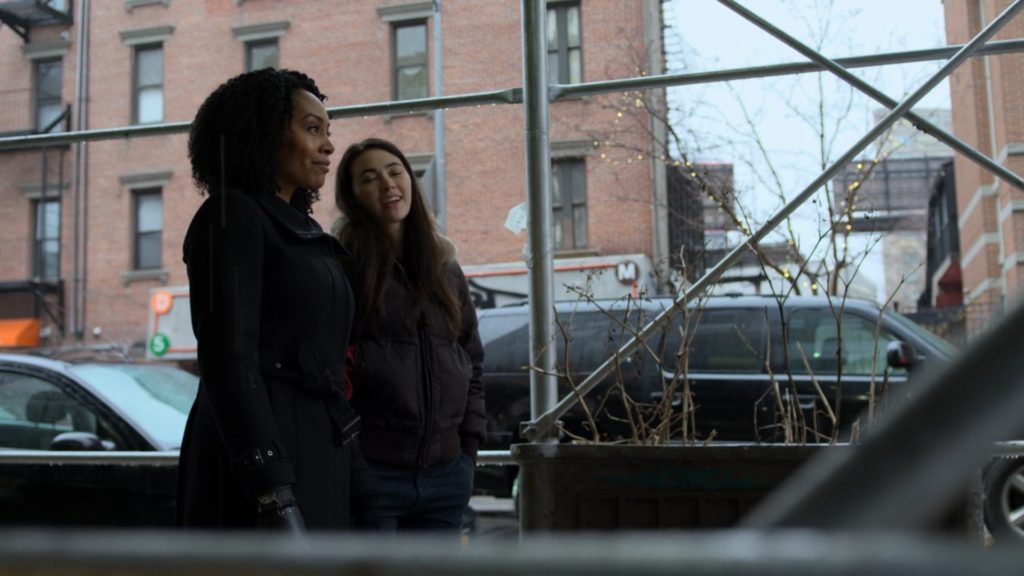 Davos might turn out to be a better Iron Fist than Danny, were it not for his constant raging. Then again, Danny’s going down a similar path so it’s all for the better I guess. If only Davos wouldn’t give in to his urge to wipe out crime by eradicating the criminals, he’s certainly a worthy candidate for the Fist. We also get a look back at his emotional ties to his Indian mother and Gita Reddy plays the role with flair, even though it’s a bit strange to see her in just that one saree getup from the children’s childhood to adulthood. Davos’ distant parting from his mother is another something Danny has in common, only in the latter’s case it was his mother who was showering love upon him with Danny being the non-responsive one.

Despite his motivations of gaining the fist because he feels he’s the rightful owner and is fulfilling a duty to his mother, Davos comes across as a weaker villain so far than the much more enigmatic Mary Walker. If there’s a story behind her personality mix-up, I’m looking forward to seeing it. Heck I wouldn’t mind an entire episode just explaining her past and how she ended up the way she is, though that sounds like it had a stronger chance of happening were the show running for 13 episodes. As things stand now, the mystery surrounding her inexplicable origins along with what we’ve been explained so far is good enough to keep things piqued. An interrogation next episode could perhaps shed some light on her condition. It’s been a fairly long time since she snapped out into her other meeker personality.

At this point, the plot is overtly simplistic, unless the writing team have an ace up their sleeve which they’re waiting to unveil. I can see why they chose to go with the 10-episode arc; there simply isn’t enough material to bounce characters off. For now, while enjoyable, Iron Fist Season 2 has yet to deliver a knock-out episode and I’m keeping my fingers crossed for one ahead. It simply ain’t this one.

Fun Fact: The 6-1-6 cop code for people with special abilities is a direct nod to Earth-616, the home universe of Marvel Comics which contains most of their superhero stories from the Golden Age of Comics.