Let’s get the singular highlight out of the way first. For Freak Accident, it has got to be Whizzer’s twist on Spider-Man’s iconic line (which incidentally has yet to be used even in the MCU movies): “With great power comes great mental illness”. It certainly reeks true for the Netflix heroes who carry powers and stories that bring to each their own psychological burdens. And it feels most appropriate in the context of Jessica Jones who with her whimsical behavior is probably the pinnacle of a tormented and screwed up superhero; the fact that she lets a random guy in a bar bang her for being man enough to compliment her ass is testament to that. She’s definitely not the Disney princess you want kids looking up to.

The second episode actually tackled some pretty adult themes and presented viewers with some rather graphic sequences. Agreed, the Netflix shows from Marvel have always dealt with gritty stuff. Nevertheless, it’s hard to imagine and yet pleasantly surprising to see Marvel go this dark with its superhero properties. Malcolm wakes up half-nude with a tattooed half-nude girl by his bedside when he receives a call from Trish to help her in her secret investigation. Jeri Hogarth descends into self-destructive mode as she has fun with street-girls, drinks and drugs galore in what feels like a rave party. That’s some seriously disturbing way of dealing with she’s going through and while the illness that breaks her down mentally is still shrouded in secrecy, it’s still painful to see a headstrong character like Jeri Hogarth transition down to this state over the course of two seasons. It really shows the game plan of the showrunners – digging deeper into the darkness enveloping each character. 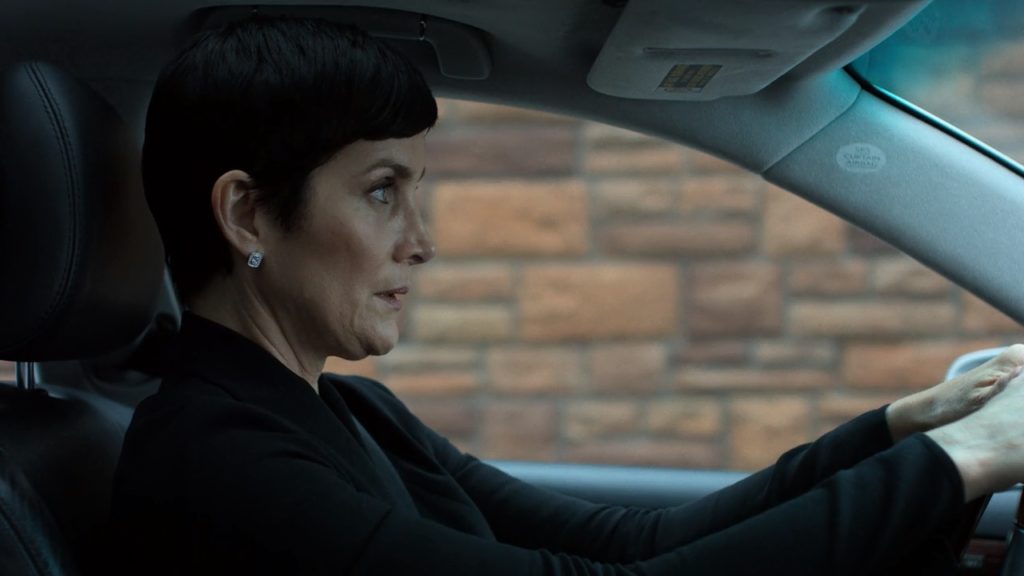 The episode also ups its pacing a bit as the investigation surrounding IGH picks up steam. Jessica Jones, after having visited an abandoned IGH facility and confronted with flashbacks of the accident she suffered with her family, becomes convinced about finding out the truth regarding her situation. Her trail lands her at a certain Kozlov’s house. Just when I was suspecting him to be IGH’s Doctor Strange, in walks Jessica into his funeral dashing my hopes. Oh well. She walks off after a fight with an amputee (yes Jessica actually picks up a fight with an amputee at a funeral; then again she’s not solely to blame). Further prodding and looking around corners helps her realize that the people who’re indirectly linked to Trish are being bumped off by this strange threat, which leads her to frantically look for Trish but unable to find her.

Trish is busy pursuing her own angle on the case, taking help from an unexpected Malcolm. We learn she’s been keeping contact with her mother despite the horrible equation they had in Season 1, although her true intentions are to reach out to a certain filmmaker named Max for info. Max, as it turned out, had sexually abused Trish back when she was a child; her mother had essentially pimped her out to him in hopes for landing her a role. Given what the industry has gone through in the last few months what with allegations and evidence of sexual harassment surfacing left, right and center, this angle of the story strikes a familiar chord. Malcolm who overhears the whole conversation is equally distraught and even beats Max up later on in a move that would’ve surely drawn cheers were this episode played to a crowed.

Eventually, Jessica tracks Trish and their paths converge to the shadowy figure who reveals himself to be Simpson. Simpson, despite the horrible things he did last season, claims to be trailing Trish to protect her. There’s not enough time to buy that story as the supposed “monster” arrives and ends up claiming Simpson’s life. Starting out as a baddie thus, Simpson dies a redeemed death but not before imparting a very useful and relevant piece of advice in the show’s context: It takes a monster to kill a monster. That line resonates with Jessica immediately after all the self-loathing she’s been doing over her actions last season; turns out her maniacal and unpredictable nature could actually come in handy in taking down this monster from IGH. Assuming of course, he’s a literal monster but knowing the showrunners’ penchant for diving deeper into characters this season and playing around with grey areas, it’s less likely that will turn out to be the case even though that’s exactly the misleading impression the show may be giving.

One additional character who’s been introduced in supporting capacity but hasn’t been given many scenes is Griffin. You almost want to believe he’s a guy with genuinely good intentions and then he spouts absurd sh*t like going into Trish’s files to track down her location when she goes missing. That kind of eccentric behavior certainly puts him at odds with the good guy image we’re associating with him and while it could very well be the show’s attempts at misleading us, something tells me there’s more to these random blurts by him than we’re able to see. I’m rooting for him to fall on the good side but Jessica Jones at this point is a lot more complex for outright goodness to exist.

After a somewhat sluggish but nonetheless gripping start, Jessica Jones ramps up its pacing in the second episode itself, quite unusual for a Netflix Marvel show. The investigation deepens and we get some additional flashbacks and insight into Jessica’s past. It should now be a matter of merely an episode or two until the big baddie is revealed in the flesh. Hopefully the show will stay focused on this main narrative and not slander it in favor of chasing other plots lurking around on the side.

Jessica Jones Season 2 Episode 1 Review: AKA Start At The Beginning