The recent turn of events with Black Panther and The Last Jedi point to a dangerous trends of fan obsession taken to the extreme.

The recent turn of events with Black Panther and The Last Jedi point to a dangerous trends of fan obsession taken to the extreme. 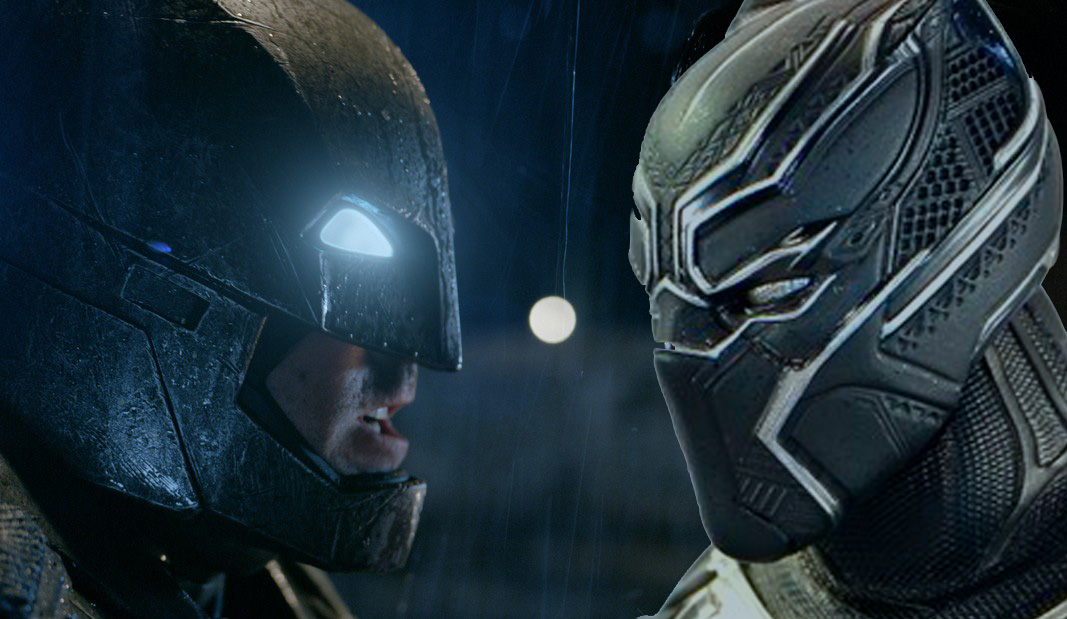 Black Panther is nicely shaping up to be one of Marvel’s most unique origin stories yet. Audiences are responding favorably by purchasing plenty of tickets in advance with sales outpacing both Captain America: Civil War and Batman v Superman: Dawn of Justice. Critics on their part, have expressed enthusiasm as the first batch of reactions hit the web after an advance screening. They’re holding off on sharing complete reviews until the embargo is lifted but the overall sentiment is unequivocally positive.

In fact, all seems to be going way too well for the first black superhero movie. That was probably a bit too hard for DC fans to digest. And after a string of consecutive successes by their competitors, they probably had enough. How could one single franchise do so well with critics time and again when their own realistic, gritty and dark movies bombed with critics and audiences alike? Something had to be done about it and these fans decided to take matters into their own hands.

This led to the fans organizing a group on social media in order to thwart Disney’s box-office and critical domination. The plan – to use all sorts of accounts (fakes, bots) and methods to sabotage the upcoming Marvel movie’s Rotten Tomatoes audience score, thereby giving it the very same backlash that DC movies received. Admittedly, this is not even the first time they’d do it; they had successfully done this in the recent past with Star Wars: The Last Jedi. This probably explains the movie’s massive divide on Rotten Tomatoes – while the critic tomatometer is 91% fresh, the audience score is a mere 48%. Some of that would’ve naturally rubbed off on other sites as well with the movie now sitting at a 7.5 IMDb score. 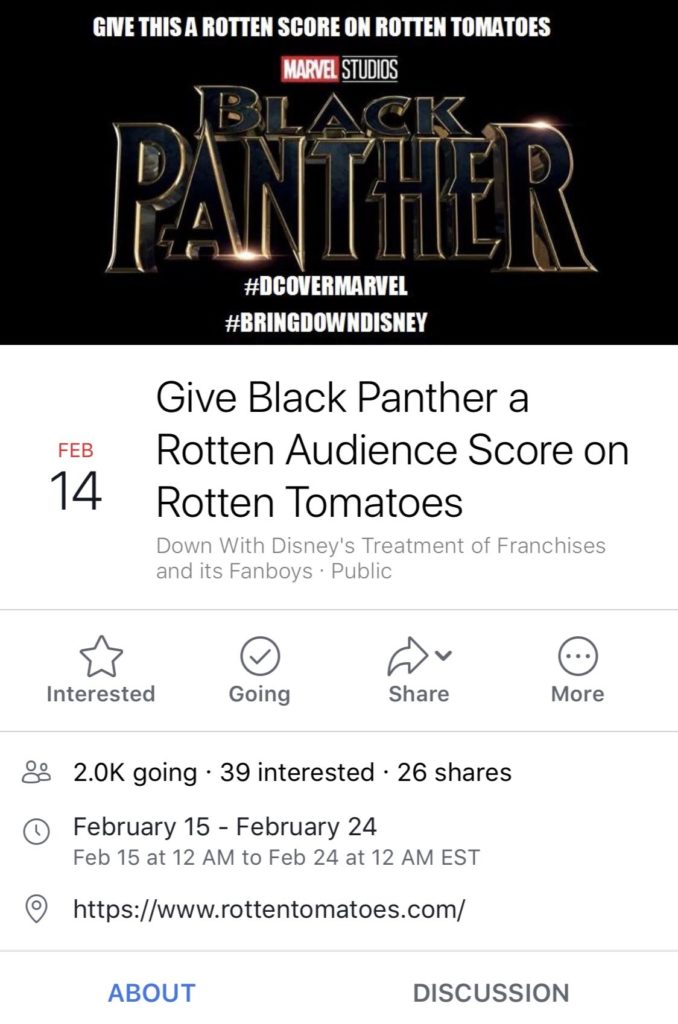 The ones responsible for running the platforms have been quick to respond. Facebook swung into action and shut down the group responsible. While this does nothing to deter fans from posting negative reviews, it is definitely a step in the right direction. Rotten Tomatoes has issued an official statement that reads:

We at Rotten Tomatoes are proud to have become a platform for fans to debate and discuss entertainment and we take that responsibility seriously. While we respect our fans’ diverse opinions, we do not condone hate speech. Our team of security, network and social experts continue to closely monitor our platforms  and any users who engage in such activities will be blocked from our site and their comments removed as quickly as possible.

Even director Ryan Coogler pitched in with his thoughts, mostly preferring to play it cool:

Sadly though, since the underlying subtext behind these statements is murky at best, it is largely speculated that organizations like Facebook and Rotten Tomatoes are acting to dissuade racially motivated fans. That is, the real motive behind fans rigging the scores could still remain unaddressed . Already angry fans are beginning to show their power in hoards; Black Panther currently has and IMDb score of 7.3 and while it’s too early to comment on whether it’s deserving of more, foul play can definitely be suspected at this stage.

The point of all of this is to bring forth the issue of fan wars which off late seem to have escalated to abnormally unhealthy proportions. Fans defend a movie as they would defend a family member. To these fans fictional superheroes are like their brothers, comic book movies their new testament bibles. Any word against them would incur their unrequited wrath. Despite the studios themselves having no interest in any sort of rivalry, the fan wars keep raging. 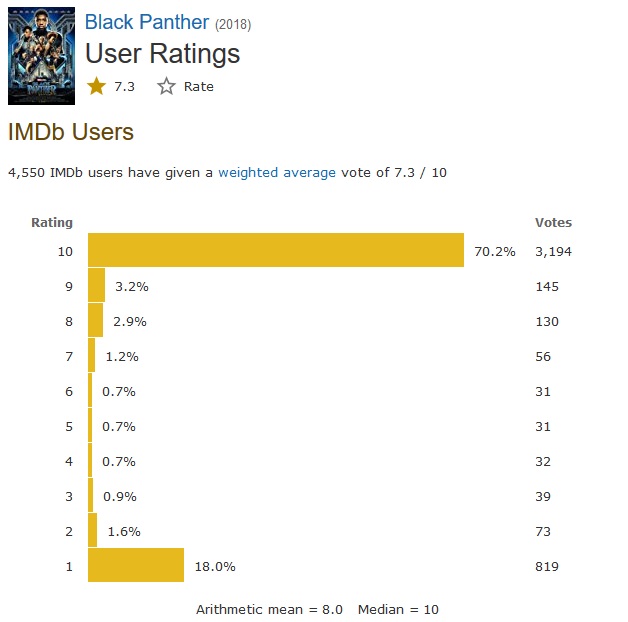 And DC fans are not alone in this, although their recent actions have taken things to another extreme altogether. Marvel fans have also been guilty of slamming DC movies and contrasting them with the “superior” Marvel flicks (there are scores of IMDb reviews about Batman v Superman which scream fan-affiliation). The amount of 10s and 1s awarded to a movie reeks of what movie scores have been reduced to. In their desperate bids to see their side succeed, fans are more and more willing to cross any lengths.

There have and can be all sorts of explanations for these digital feuds. Conspiracy theorists might even surmise that the companies responsible, Disney and DC, are hiring people to deliberately fight these wars and keep the spirit of competition alive. Some fans could be raging wars simply for the heck of it, enjoying trolling and bashing the opposition around. It could give them a sense of belonging and an outlet to vent their day-to-day frustrations. Whatever be the reasons, these fan wars are beginning to have tangible effects now as was seen with The Last Jedi. Fortunately, Star Wars being Star Wars, this act didn’t impact its box-office much; the movie already surpassed the $1 billion mark last month. But for an original property like Black Panther, this war could be damaging and hurt its prospects, never mind the movie is a part of the MCU. And the perpetrators have no signs of slowing down; there are plans in place to lay waste to Avengers: Infinity War and even Solo: A Star Wars Story and will naturally extend to other Marvel-Lucasfilm movies down the line.

At a practical level, these acts are possible because of the way movies are rated. Often, rating on movies opens up if the movie has released in at least one territory, allowing everyone to vote on the movie without even having seen it. There’s no tangible way of identifying whether a person is simply trolling a review or has genuinely liked or disliked the movie. Sites like Rotten Tomatoes and IMDb allow anyone and everyone to review and rate a movie and take most every vote into consideration somehow when calculating the final score.

On a more idealistic note though, the best way these wars can be prevented is if fans realize that opinions are largely subjective; that just because a set of people didn’t like a movie does not really stop them from seeing the movie and liking it themselves. And technology today also allows one to be a lot more vocal about their views on a movie than was possible a decade or two down the line which means should someone like a movie, they’re free to voice their opinion and share their reasoning in a civilized manner without needing to resort to threats, violence or engage in an ugly game of ruining the rival’s reputation. If only people decided what they liked or didn’t like for themselves instead of relying on percentage numbers, a lot of these “fans” would be satisfied with the movies they get to see.

Finally, what DC fans seem to forget in the moment is that for the longest time, DC movies enjoyed a great reputation among critics and audiences alike, to the extent that there simply was no competition. Superman: The Movie, Superman II, Batman, Batman Returns were some of the early DC attempts that received great critical praise at a time when Marvel movies were practically non-existent. And while DC’s great run with comic-book movies hit a slump in the middle, it rebounded with Christopher Nolan’s The Dark Knight trilogy which is considered to be one of the best series of superhero movies ever made. Marvel on the other hand had plenty of flops in Daredevil, Elektra and Ghost Rider as also some really comical attempts at bringing its heroes like Captain America and the Hulk to life before the MCU started. It’s a shame fans would forget all this and suddenly start construing conspiracy theories about Disney paying the media off. The truth, is that paying the media is a far too risky move for studios to even think about indulging in.

At this stage, this is probably stretching into a long rant so I guess I’ll end it at this: Fan wars at this stage are bordering on downright ridiculousness. Not all fandom is representative of the few rotten tomatoes that threaten to spoil Rotten Tomatoes. Be it Marvel or DC or even Star Wars, a few bad names bring shame to the entire fandom. Watch a movie, rate it, share your opinions and move on. Don’t be a jerk. Just, don’t.