A thrilling action packed ride from inception to conclusion

A thrilling action packed ride from inception to conclusion

By Divij Sonak On Jul 29, 2018
Left to right: Henry Cavill as August Walker, Tom Cruise as Ethan Hunt and Rebecca Ferguson as Ilsa Faust in MISSION: IMPOSSIBLE - FALLOUT, from Paramount Pictures and Skydance.

Film franchises often risk getting stale and inducing fatigue the longer they run. The last decade however, has seen a few examples subverting the rule, most notably the Marvel Cinematic Universe. At this point, it’s safe to count Mission: Impossible among the ranks of such series (and with six films in, it’s certainly a franchise in its own right). Despite following most of the plot beats of its predecessors, this latest one, subtitled Fallout strings together a narrative so coherent it’s hard to drift away by any distractions.

By now the trademarks of the series are all well established and present here in spades. We have Tom Cruise doing his own stunts, defying both gravity and age as the Impossible Missions Force’s top agent Ethan Hunt, alongside computer experts Simon Pegg’s Benji and Ving Rhames’ Luther Stickell to provide some technical wizardry and humor. Elaborate action pieces are sprayed throughout the film in heavy dozes, guided by top-notch execution thanks to stunt coordinator XXX and director Christopher McQuarrie. You have the anticipated yet surprising double-crossings, some playing around with masks, a plot that hinges on annihilating world destruction through nuclear means and a final countdown that stops just in the nick of time before Ethan’s crew snaps the wires.

What’s new is the return of director Christopher McQuarrie who is the first to actually helm two installments in the series. The result is that instead of starting over, with a new director setting his tone for the film, we have someone who carries forward much of what he established with the last film. Sean Harris returns as Solomon Lane, the head of the terrorist organization Syndicate that has sort of rebranded itself into The Apostles. Only instead of being led by Lane, they’re supposedly answerable to a John Doe named John Lark. Early on in the movie, Hunt’s decision to save his friends / teammates causes them to lose three plutonium spheres which end up in the wrong hands. Hunt is now sent on an elaborate goose chase to apprehend Lark and find the missing plutonium before a bomb harnessed from them brings global catastrophe. 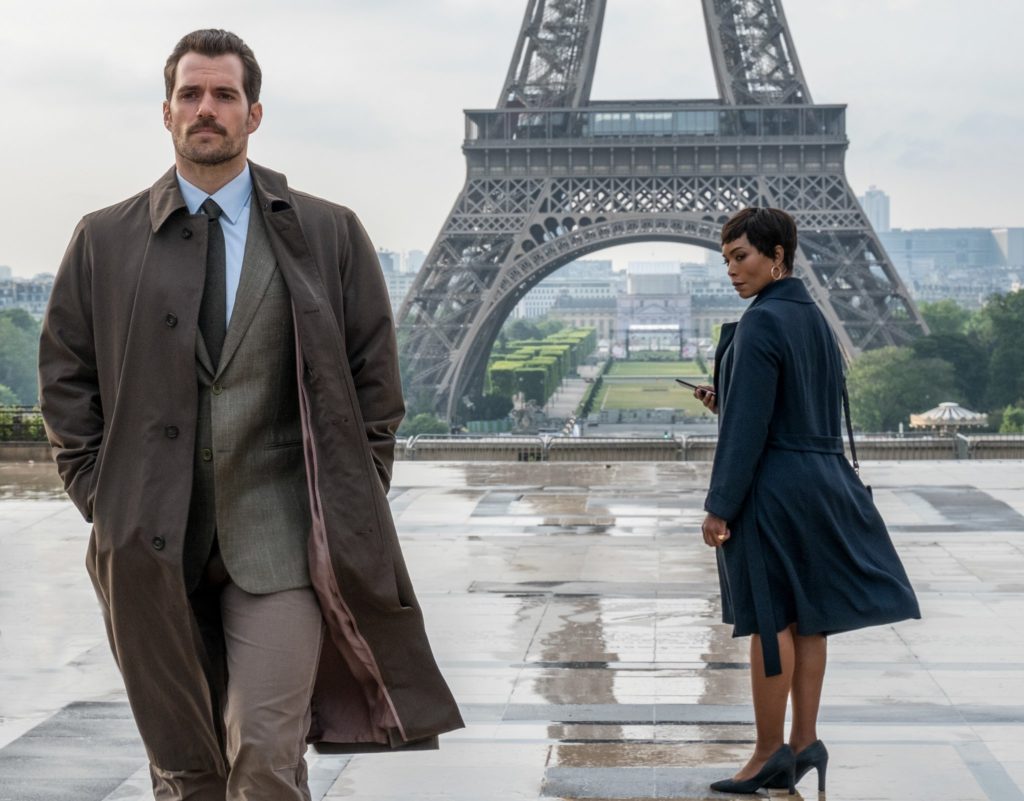 Accompanying him this time is Superman himself, Henry Cavill as CIA’s top agent-assassin August Walker, operating under orders from CIA’s newly appointed director Erica Sloane (Angela Bassett). As Walker, Cavill plays it cold and tough, not letting an ounce of humanity slip by, proving he has the chops to take tough calls should the need arise. This is contrasted nicely with Hunt’s character, who at times goes to foolishly extreme lengths to save the life of one person over the lives of many. And while the CIA may consider this a liability, IMF director Hunley believes this is what makes Hunt stand out from many others in the line of duty. The contrast is further highlighted in a tense sequence where an innocent female cop holds Hunt, Walker and their crew at gunpoint until some goons arrive and shoot the officer in the leg. Without giving any context here, Hunt shoots down the goons and apologizes to the cop before departing with their asset.

What has largely set Mission: Impossible apart from other action films is the insistence of its lead star in doing his own stuns, which kind of allows the crew to film camera angles they otherwise would be unable to get without use of CGI. The end result is that not only does the action look great, with a raw intensity to it that highlights Cruise in all his glory in precarious situations, but that McQuarrie’s hand and expertise in staging the set pieces ensure that they flow smoothly and coherently. If you’re like me, flustered by the unnecessary and forced use of shaky cam to obscure the hits and punches, you’ll be delighted to know that the sequences here give you a clear glimpse at what you’re seeing, both structurally and geographically. Whether it’s the spectacular bike chase through the streets of Paris (my personal favorite), the Helicopter chase in the end (which Cruise famously piloted for real), the foot chase through the rooftops of French structures (which is where Cruise prominently injured himself, bringing production to a halt) or the HALO jump at the beginning that plays off like a Birdman-esque extended single cut (which again, Cruise seems to have done for real), the action has an authenticity to it that’s often lacking in CGI-enhanced blockbusters.

The other interesting aspect of Fallout is its music. Composer Lorne Balfe takes the well-known Lalo Schifrin Mission: Impossible theme and spins a Dark Knight inspired version of it that simultaneously looks like a cross between the horns in Inception, the trumpets from Junkie XL’s Mad Max: Fury Road and Bane’s theme in The Dark Knight Rises with snippets of Joker’s theme from The Dark Knight. This is equally gripping and annoying given how frequently ripped off and overused Hans Zimmer’s then path-breaking score from those movies has become, even though the end result instills in Fallout a sense of urgency that is a far cry from the coolness and attitude it embodied during its Mission: Impossible II days (which, ironically was scored by Zimmer himself).

Despite the music running through most of the movie, McQuarrie makes some interesting directorial choices to raise the narrative stakes. One of the more impactful decisions taken occurs when the White Widow explains to Hunt the “asset” needed to be traded in exchange for the plutonium. Obtaining the “asset” involves breaking someone out and almost immediately, the movie cuts to the action with the music stripped off and replaced by a silent orchestral melancholy. That of course, turns out to be Hunt’s imagination of what would play out before a different version of the scene actually plays out, but the imagined version is both disorienting and downright eerie when you boil down the way it ends and ramifications of it (spoiler) – that Hunt needs to break out the very man he risked his life to get imprisoned in the previous movie, even if it means killing innocent lives (end spoiler).

Continuing the hallmark globetrotting nature of the adventure, we’re treated to locales across Paris, London and Kashmir (which was rather unfortunately recreated in New Zealand and Norway). The narrative spans roads and mountains through foot, bike and helicopter chases but not once do you lose track of the key plot points. Unlike the franchise’s first outing which was heavy on twists and double-crossing, this one lays the important points out front in a simplistic prologue of sorts where a vintage tape explains what we need to know and gets us started. The camera follows the goings-on with equal fervor and Rob Hardy gives us some fine cinematography whether it’s covering the expanses of exotic glaciers, mountain-tops and snow-laden peaks, or following the film’s lead star through the streets of Paris. There’s also a fine bit of grain present in several sequences which suggests the use of 35 mm film, with certain bits and scenes blown out and digitally remastered for the IMAX ratio. And while the movie runs at tad bit long at 146 minutes, I’m for once glad they didn’t cut out a lot of the material to bring it down to 2-hours and consequently shape it into a generic action spy flick.

Movies like this are not known for their characters and performances. While the latter remains true, and it’s one of the complaints I had with the last installment as well, performances are actually decent this time. My strongest moment in the movie has to be a pain-stricken Luther revealing Ethan’s past and his relationship with his wife to Ilsa, and how the demands of his job eventually put a strain on their marriage. It gives Ving Rhames a moment to shine as opposed to be stuck behind computers inputting random keystrokes. More such moments would’ve served to highlight characters better, including Henry Cavill’s Walker, who appears a generic sidekick as a result. Rebecca Fergusson’s Ilsa Faust remains complicated as ever and Fergusson dances around with the character’s unclear motives although she does get her own closure by the movie’s end. And in a welcoming respite, Michelle Monaghan makes an appearance as Julia, Hunt’s estranged wife who underwent the trauma of being Hunt’s wife in Mission: Impossible III. This is perhaps the only Mission: Impossible movie that connects so well with the others and truly makes the series feel like one.

The movie’s biggest strengths, aside from its action of course, are star-producer Tom Cruise and director Christopher McQuarrie. Cruise proves yet again that his dedication is unmatched and shows no signs of slowing down when others his age are transitioning into drama or retiring from superhero movies. McQuarrie on the other hand is the key that holds the movie together, writing out a story that connects the dots from the previous movies and elevates what could’ve otherwise been a generic action movie to a relentless pursuit of evil, featuring some expertly choreographed action along the way.

Mission: Impossible – Fallout is in essence, like pizza. You know it’s unhealthy for you and is going to make you lazy for the next few hours. And yet you can’t help but be drawn to it, and often wonder and lose yourself in the ever-so-tasty and fulfilling cheese. Fallout is a double cheese burst variant delivered with some of the best toppings in the business. It’s a pizza alright, but a fine one that you’ll hungrily devour and enjoy. And it’ll leave you with a filling taste, satiating your hunger, while still leaving you yearning to come back for more. At this rate, each movie in the franchise is only getting better and not even Cruise’s age looks like it will slow this down.