5Gsmartphonessnapdragontechnology
By Divij Sonak On Dec 6, 2018 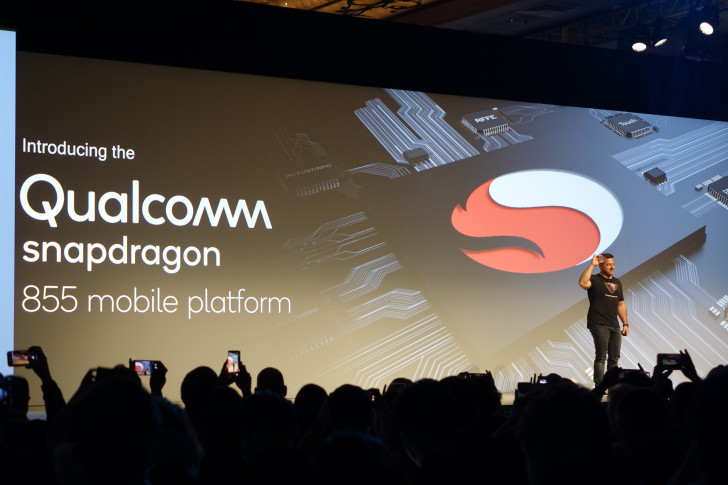 At its Tech Summit event today, Qualcomm officially announced the new Snapdragon 855 chipset, laying the foundation for flagship CPUs in 2019. The platform marks quite a significant improvement over its predecessor, 2018’s Snapdragon 845 and is built upon a 7 nm fabrication process that should lead to considerable gains in performance while simultaneously cutting down on power utilization. The announcement also puts to rest rumors of Qualcomm shifting to a new naming scheme and calling the chip the 8150 which, as it turns out, was merely an internal code name.

The Snapdragon 855 includes 8 of Qualcomm’s new Kryo 485 cores clocked at up to 2.84 GHz. Although it’s not explicitly revealed, we’re assuming it uses some combination of ARM’s new Cortex A76 and A55 cores, much like the Kirin 980. There’s the Adreno 640 GPU that should allow for up to 360 degree VR streams in 8K while supporting all the popular graphics frameworks such as OpenGL, Open CL and Vulkan.

5G is one of the big selling points of 2019 and Qualcomm unmistakably includes that in its chip. The 855 itself comes integrated with the X24 LTE modem that’s capable of speeds up to 2 Gigabit per second. Smartphone manufacturers will have the option of strapping an X50 modem to squeeze out the phone’s 5G capabilities should they desire.

There’s also the new Qualcomm Spectra Image Signal Processor to handle camera workloads. The Spectra 380 as its called supports dual cameras of up to 20 MP and single cameras going all the way to 32 MP. Support for HDR10 and HRD10+ is also included in video capturing and the chip should be capable of supporting 480 FPS video capture in 720P natively. The Snapdragon 855 can power displays of up to 4K resolution with support for the HDR and HRD10+ standards.

Finally, there’s also the under-display fingerprint sensing technology that was heavily rumored to be included as part of the chip. Dubbed Qualcomm 3D Sonic Sensor, the tech should be able to recognize smudgy and wet fingerprints as well.

We’ll update this post as more details about the specs surface, including especially the breakdown of cores involved. You can check out the complete specs sheet through the source link below. Expect the Snapdragon 855 to power all Android flagship smartphones in 2019, starting possibly with the Samsung Galaxy S10 which itself is supposedly due for an announcement in February’s MWC.