The Galaxy Fold is a smartphone that folder outward into a tablet. 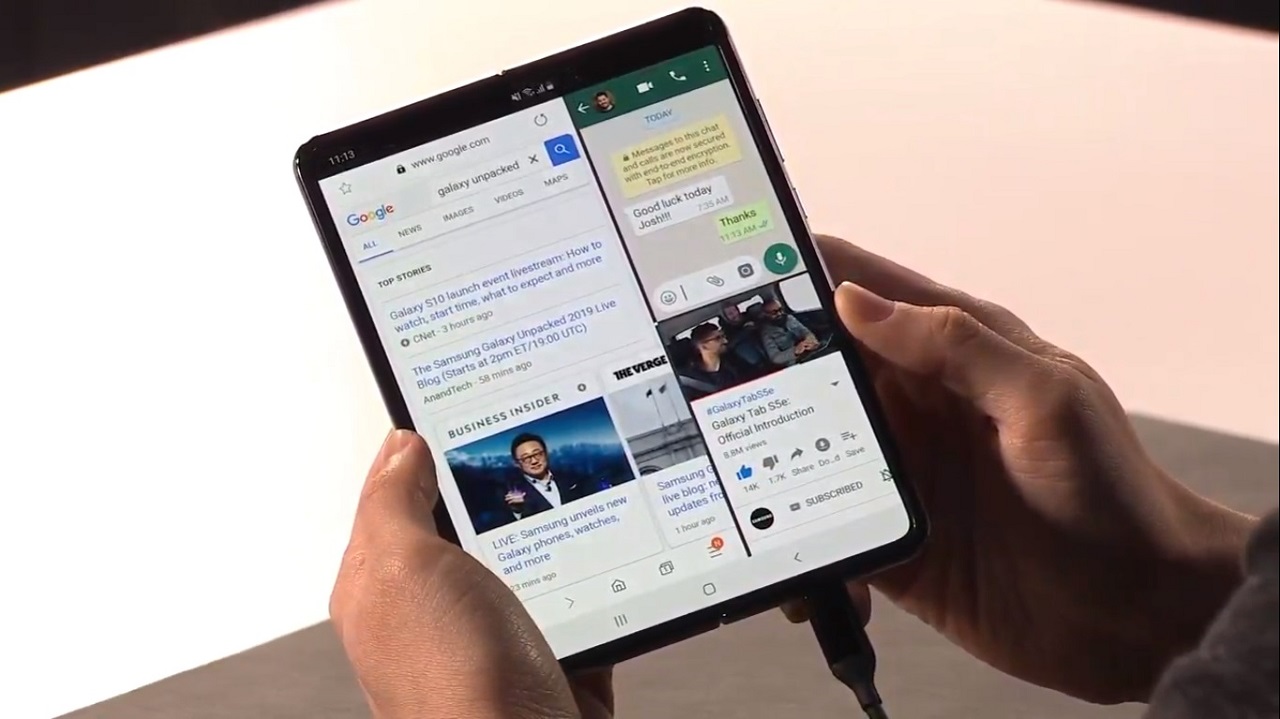 Samsung delivered the promise of a foldable phone at its special event last year, ever so briefly depicting it live. Now, at its Unpacked event, Samsung has gone ahead and announced the world’s first foldable smartphone (that is, if you discount the Royal Flexpai that mysteriously appeared a few months back). Dubbed Galaxy Fold, the phone is an impressive piece of tech that unfolds outward at a central hinge to assume the form factor of a tablet.

In its closed form, the Galaxy Fold is a 4.6” screen with 1080 x 2280 pixel resolution. It unfolds to a 7.3” Infinity Flex Display with a 1536 x 2152 pixel screen maintaining a pixel density of 414 ppi. The underlying hardware is somewhat standard though top of the line, with the Fold powered by Qualcomm’s Snapdragon 855 paired with the Adreno 640 GPU. There’s only one configuration available and that’s with 512 GB of storage and a whopping 12 GB of RAM, making the choice of purchasing somewhat easier.

It doesn’t have a lot of the bells and whistles that its sibling Galaxy S10 phones come with (which themselves were announced in the same event). It does however, pack two batteries, a 3000 mAh one on each screen totalling 6000 mAh that’s going to come in handy to power that hungry 7.3” screen. It has six cameras in all to capture images from all angles. In terms of price, the phone will be produced in a limited capacity, with only a million units made.

At the software side of things, the Fold will support multitasking for running up to three apps simultaneously. You’ll also be able to switch between screens while maintaining continuity. Samsung has worked with WhatsApp, Microsoft and Google to ensure their respective apps run smoothly on the new form factor, including YouTube Premium. When demoing the phone, there was a minor glitch when the Google Maps app didn’t open upon multiple taps but elicited audience cheers when the app launched in folded mode, before expanding to tablet mode when the screen unfolded. The three-app multitasking was also demoed.

And then Samsung unveiled the price. The Galaxy Fold will cost $1980 and will be available come April 26. That price point made the entire hall go silent and it took a while for the momentum to bounce back. The Galaxy Fold will come in Cosmos Black, Space Silver, Marian Green, Astro Blue colors with customizable color options for the hinge.

It’s bound to be a limited sell but the Galaxy Fold is the ultimate proof that foldable phones are finally here. Whether they’re here to stay is a different question entirely, one that will be answer in due time as we observe how these phones sell, perform and spout competing manufacturers to come up with their own versions (looking at you Xiaomi).