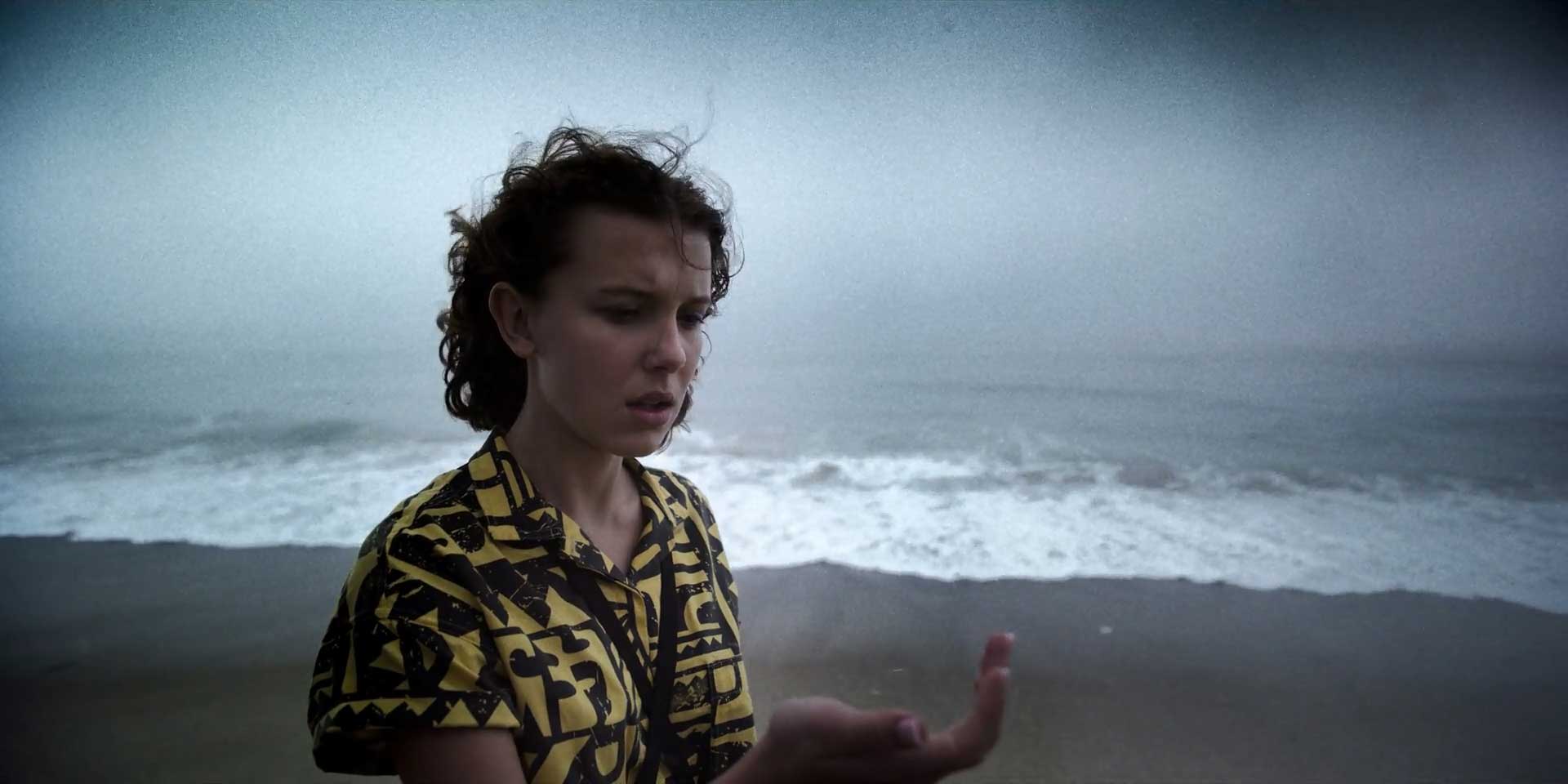 Wow. Stranger Things 3 almost went the psychedelic route by giving us an in-depth peek into Eleven’s mind as she tries and locate a key character and ends up learning more about his past. Dustin and Erica work together to break Robin and a badly beaten Steve out of custody while Hopper and Joyce try to extract some information from a non-cooperative Russian scientist Alexei. And it all concludes in some ominous build-up over disaster waiting to strike a carnival fair full of people.

First off, it was rather gutsy and brave for Steve to sacrifice himself to let the kids Dustin and Erica escape. The attempt costs him and leads to him being brutally beaten down despite actually speaking the truth. It’s just a case of being caught in the wrong situation in the wrong circumstances. It’s when he and Robin attempt an escape and fail that the episode really crackles as they reveal some of their backstory under the influence of some trippy drugs administered on them. Once again, Maya Hawke snatches the show from Joe Keery with her pained description of her semi-crush on Steve as the duo talk teenage philosophical stuff about the importance of finding oneself and not buying into whatever they’ve been fed as a kid.

There’s some movement with Hopper and Joyce’s plot even though large chunks of it remain tiring at best. Hopper for one feels like a nearly different person and his bouts of anger issues have exacerbated, leading to frequently tiring outbursts. Still, the fact that they eventually get Alexei to talk and explain their attempts to breaking open the doorway to the Upside Down add some weight to the plot, even as it begs the question of why exactly would the Russians or anyone want to do such a thing.

The episode undoubtedly belongs to Millie Bobbie Brown’s Eleven and Natalia Dyer’s Nancy, both women put under difficult situations of duress and both come out of it a bit scarred. Nancy’s struggle is a lot more physical, dealing with the aftermath of the two monsters from within two of her co-workers combining into one. It would’ve made a great impact if Nancy was a goner but I’ve since accepted that no one’s really going to die unless it’s the final two episodes. Regardless, the cold opening continuing from last episode’s chilling cliffhanger was every bit as tense as it could be.

The centerpiece of the episode, as with many others, is the final few moments with Eleven using her mind tracing abilities to locate Billy and consequently, the Mind Flayer’s warehouse. It results in an almost psychedelic trip to Billy’s mind that, while not as crazy in theory, is still a fascinating insight into the show’s most troubled protagonist. Seeing Billy as a child go through emotional and at times physical abuse at the hands of his father is shown as the trigger for turning Billy into what he is right now. What’s even more interesting is that theoretically, Eleven has been able to access Billy’s deeply buried memory which is yet another step into granting her a superpower and essentially turning Mille Bobbie Brown into an 80s superhero without the costume and all.

Expanding on my last week’s theory which may have left a few readers scratching their heads, this week’s ending adds some more context. It appears the Mind Flayer has the ability to split itself to infect its hosts. It can then call upon its “copies” to unite and make it infinitely stronger in size. It also follows then that all hosts infected by the same variant of the Flayer are in some sense connected and destroying one could hurt the other as well. Which now puts more context into the children’s efforts at looking for the source; they’re essentially trying to take out the root or the king which should take out its entire squad in one swift move.

Because of the increased presence of the Mind Flayer, this episode was rather heavy on visual effects. Thanks to some clever use of concealed and flickering lights early on in the hospital, Netflix would’ve without question been able to save on rendering some frames for Stranger Things‘ creatures. That said, the VFX were top-notch and not distinguishable or noticeable at all. Season 3 has had hallmark production values that almost make these 8 episodes look like they’ve been shot for a theatrical movie. The amped up cinematography and general scale of the show only contribute toward that feeling.

Stranger Things 3 could’ve possibly delivered yet another series best episode with this outing. What started off as slow, at times tedious fare in the beginning has quickly turned into gripping, popcorn munching fare that’s just harder to stay away from. We’re now just two episodes away from uncovering the climax and ending what should be an incredibly satisfying semi-binge watch in quite a while.