Scottie returns to put Harvey in a fix as characters battle with self-doubt in a fine hour of Suits. 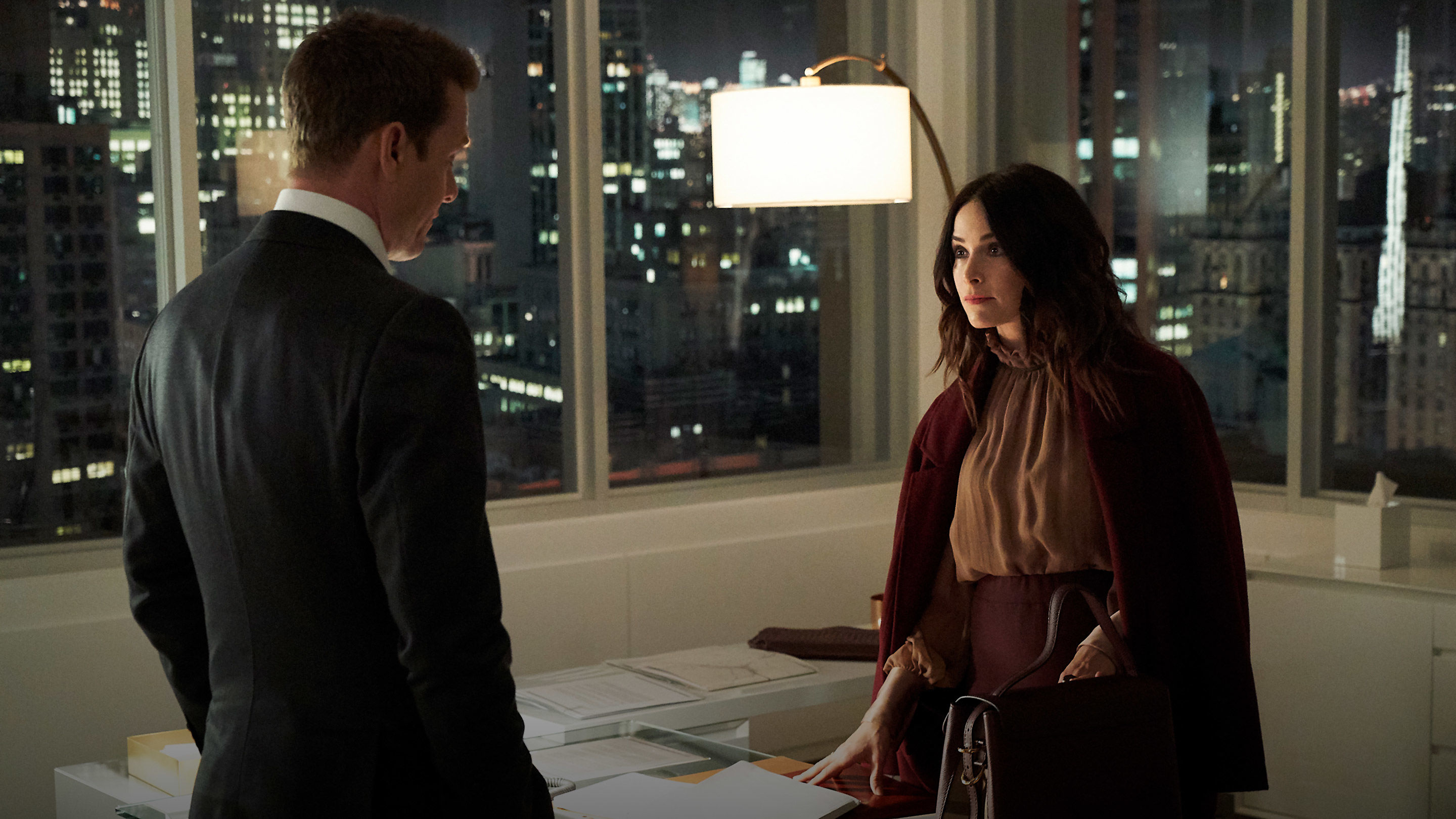 Suits delivered a mostly solid hour with its fourteenth episode Peas In A Pod. As teased through its promos, Dana Scott made a re-entry in Harvey’s life in an unexpected way as the central cast handled some intensely personal cases. And Samantha Wheeler made Katrina Bennett owe up big time while also getting to utter two of the show’s permissible three f’s. Overall, a rather solid hour. Let’s begin digging in.

The cold opening sets up the premise for what central conflicts we’ll be following this time around. And for this episode, they’re largely disconnected which means even though we see most of the show’s main cast have a role to play, we don’t see them interact with each other. Harvey is sure Scottie is up to something, which turns out to be slapping a legal notice to Samantha, who takes Katrina under her wing to repay her debt. Alex is defending a client whose diabeties machine lost someone his wife (or so he claims). Finally, Stanley Lipschitz, the therapist Louis has been seeing regularly, gets into trouble and Louis offers his law services entirely with some initial resistance. It goes without saying that with so much to juggle, certain characters (Robert Zane) and subplots (Donna’s romance) take a backseat.

Let’s start with Scottie. Her involvement nicely set up the stage for a women-on-women fight involving some strong personalities. For once, the men were kept out of it which was a refreshing change. As is standard with Suits by now, the legalities proceed quickly and it just takes a matter of quick thinking to come up with a loophole to nail the other party down. In this one, Samantha uncovers the shady practices Scottie’s client is indulging in. The thing is, Scottie herself is aware of it and is only trying to save as many jobs as she can and after digging up dirt on Samantha’s past, she’s afraid the named partner is going to come hard at her. Harvey and Donna work to close the case without things dragging too far and there’s no need to mention how that turns out.

The good thing here is, Harvey doesn’t go on rewind mode and hook up with Scottie yet again. We’ve seen that too many times in the past now that the two are just not cut out for each other. What is interesting though, is Donna asking Scottie to stay away from the firm, which she takes as staying away from Harvey. In a certain sense, she becomes the instrumental factor in at least making both Harvey and Donna realize how they feel (or should feel) about the other side. This is evident in the episode’s climactic punch when Harvey is yet again about to ask Donna out when Thomas Kessler walks out of nowhere and steals her from him. Harvey departs with Samantha, which I’m hoping doesn’t lead to a romance. Or perhaps it does and it’s the final fling these two have before they get back with each other?

Alex is embrioled in an interesting ethical dilemma himself. The choice comes down to putting his client behind bars or proving a man is guilty of killing his wife by setting the insulin dosage time inappropriate (Memento vibes?). The case becomes a lot more personal when Gretchen reveals she lost her husband to diabities and I’m glad Alex got to wrestle with a heavy dilemma rather than just talk his way out of a situation easily (even though that’s essentially what he does in the end). At the other extreme, Louis handled Lipshitz’s case rather well, putting his therapy to the test and displaying an incredibly mature side to himself that, as he himself admitted, wouldn’t have been possible 3 years before.

There are some interesting parallels between the two cases. In some ways, both are personal to their respective lawyers; Louis has formed quite a bond with Lipschitz over the months and Alex comes to see his prosecuting client’s situation in a new light after Gretchen revelation. Both are also about people in self-doubt; Lipschitz is doubting if he’s responsible for prescribing incorrect meds and for the most part is convinced whereas the person who Alex blamed for the death of his wife is equally rattled upon realizing what Alex is up to. It’s shaking to see him shaken and probably even start to believe for a split-second if he was responsible. Finally, both cases end not through a display of one upmanship but heart-to-heart talks between the lawyers and the person involved directly at their respective houses, with Louis and Alex convincing their respective plaintiffs about trying to see the bigger picture. And they both do, echoing the theme that for all the bad it has to offer, the world has enough of good in it after all.

We’re probably well past complaining about the standard structure Suits tends to follow now that the show is entering its final season, so let’s focus on other things instead. There’s a general sense of stalling things to deliver the final blows in the last two episodes and set the stage for an eventful finale. Mike’s being namedropped pretty frequently as well, and I’m banking on Patrick J. Adams making an appearance before the show ends, or hopefully before the season ends (is that why they haven’t released the final episode name yet?). There were also quite a few standalone moments that stood out, whether it was Katrina taking a strong stand for her own (Amanda Schull really lashed out at Katherine Heighl on that one) or the quiet moment between Harvey and Donna right before Thomas walked in with his swagger. Perfect Timing.

On the whole, an enjoyable and entertaining hour of Suits that yet again brought the spotlight back to the legal cases but was largely focused on giving its characters moments to shine. I can’t really say it took the over-arching storyline anywhere, except in the case of Harey and Donna’s relationship. It’s now down to the final two episodes before we enter the final season, which should air later this year.

The Road To Avengers: Endgame – The Incredible Hulk