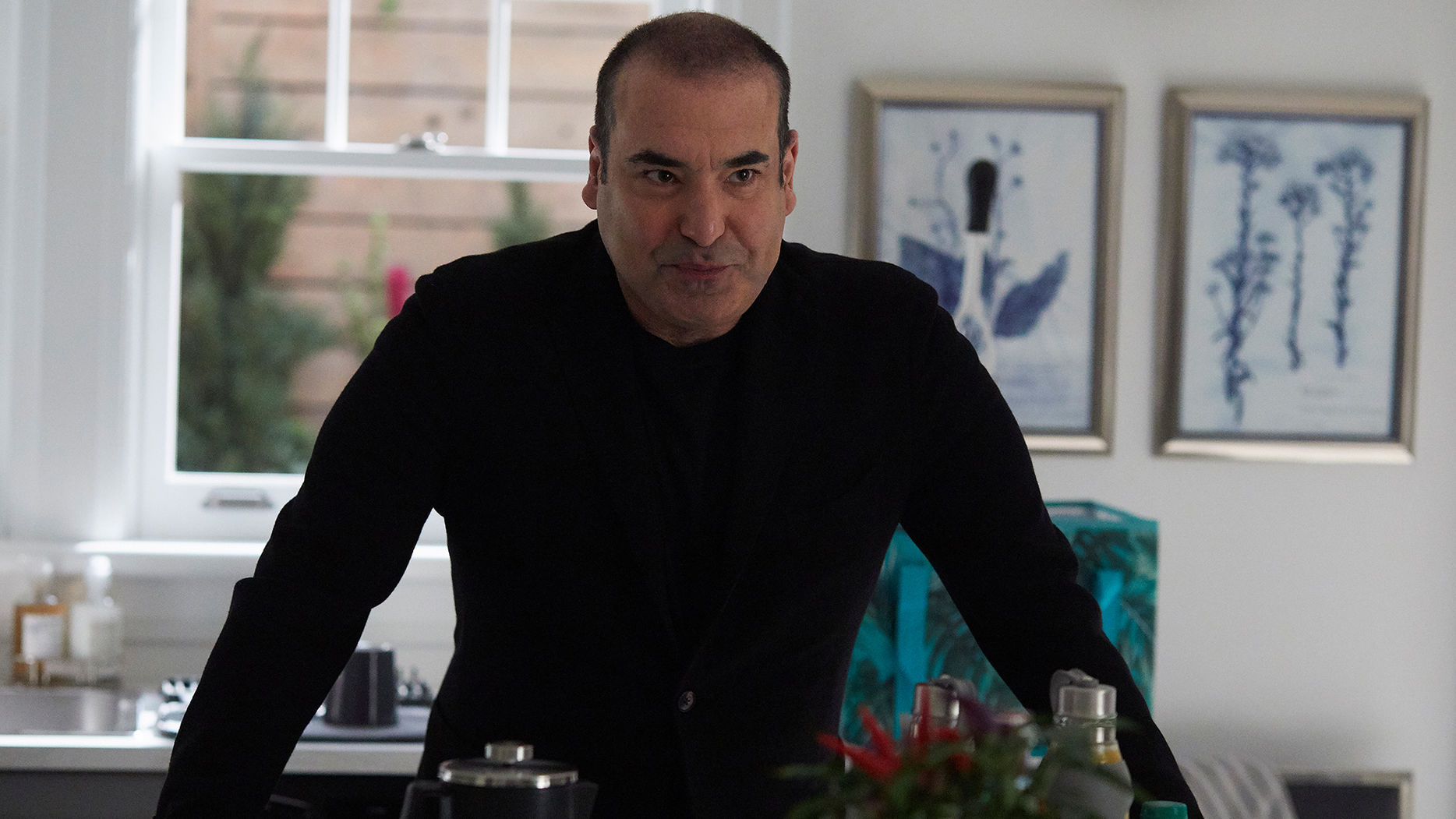 As is the case with most all episodes of Suits, this one advances three subplots concurrently. There are however, quite some interesting parallels to be found between the subplots and they all quite breeze through without any major hiccups. We also get a quick dive into Louis’ high-school years opening yet another facet of the character’s personality, while giving Rick Hoffman some strong material to play off.

Right off the bat, the bullying stuff is brilliant, more so because it’s presented in a manner that makes it quite relatable. Louis represents the elite and privileged class of citizens in upstate New York and the fact that even the rich aren’t spared from these everyday troubles makes for compelling viewing. Thus, for Louis, it’s even more terrifying to see his childhood bully end up as the numero uno fertility specialist in the city, who he winds up consulting together with Sheila. It opens a whole new can of worms for Louis and to rub salt into the wounds, the bully himself is all grown-up and doesn’t really recall bullying Louis at all.

The one person Louis can rely on in these times is his therapist. Lipschitz has grown in his role as a mentor-cum-father figure of sorts for Louis and has become a key part in allowing Louis to lay out his thoughts clearly. There’s not many people a guy like Louis will confide him and having Lipschitz on the show essentially gives Louis a way of talking to himself. And he’s quite effective at his therapy too; in an especially powerful scene towards the end, he helps Louis confront his childhood fears inside the locker he’d be locked up in, which leads to an amusing revelation about Louis’ trademark hugging style. And while it initially seemed as if Louis will achieve closure through a verbal confrontation, much surprisingly the closure has to do with acceptance than lashing out. It’s also saying something that the first reaction of Louis upon meeting his childhood bully is one of trying to subside his fears as opposed to going on a verbal spree, a clear indication that his therapy is working. Powerful stuff.

The other subplots are less impressive in front of Louis’ but have a ring of association with each other. Both Alex and Samantha are neck-to-neck in the race for named partner and are trying extremely hard to land clients that could end up impressing Robert Zane. In a welcome turn of events however, Coral Gables shows us what it’s like for the duo to fail, even if it means them experiencing the said failure in the same episode. Alex ends up missing a client because a document containing an offer couldn’t be sent at the right time, landing his current relationship with a client in jeopardy. More interestingly, it’s Gretchen who ends up doing the goof-up when she takes over in Louis’ absence, who’s taken a day (or two) off for his medical appointments.

Gretchen’s stuff again was something a lot of people could end up having gone through in office. It’s easy for a simple mistake to happen where you thought you had couriered the document, only for it to not having gone your way. In her case, the document ends up right back in her office when Donna accidentally picks it up. Of course it’s a little far-fetched to think Gretchen wouldn’t check with the courier service when she didn’t receive any message confirming the pickup, but it’s easy to excuse this behavior when she might have hundreds of other tasks at her disposal. I also think she could’ve somewhat underestimated the importance of the document, leading to a callous and carefree dispatching of the same. This is all simply day-to-day office stuff and anyone who’s worked with a reasonably sized firm can instantly relate to the events, if not to the setup.

Samantha on her part goes after her old boss Eric Caldor, wanting to poach one of their clients to impress Zane. Little does she know that it opens a can of worms in her own closet as she’s force to confront, and even admit to Harvey about the case where she buried evidence to protect the daughter of a rich CEO, a daughter accused of murder. The parallels between Alex and Samantha’s case notwithstanding, it’s interesting to see the parallels between Harvey and Samantha. It also didn’t hit me until this episode how both were a fan of kickboxing and I’m hoping we get a ring-match at least before the close of Season 8.

What’s also notable is how the managing partners have swapped places with their nominees. At the season’s beginning, Robert was pushing Samantha while Harvey was on Alex’s side. The tables have slightly shifted, if not turned and Robert has begun appreciating Alex’s lawyering skills and is even working with him on his wine barrel botch-up while Samantha and Harvey are beginning to connect over the former’s desperate drive to end up as named partner. This is only going to make the choice a lot more difficult and I just hope Suits throws up an interesting solution to the conundrum and doesn’t rush to the simple crowdpleasing solution of making both named partners. For Pearson-Specter-Litt-Wheeler-Jones would be one hell of a firm name.