Suits weaves in the classic prisoner’s conflict into its central storyline as Harvey comes close to being thrown into prison. 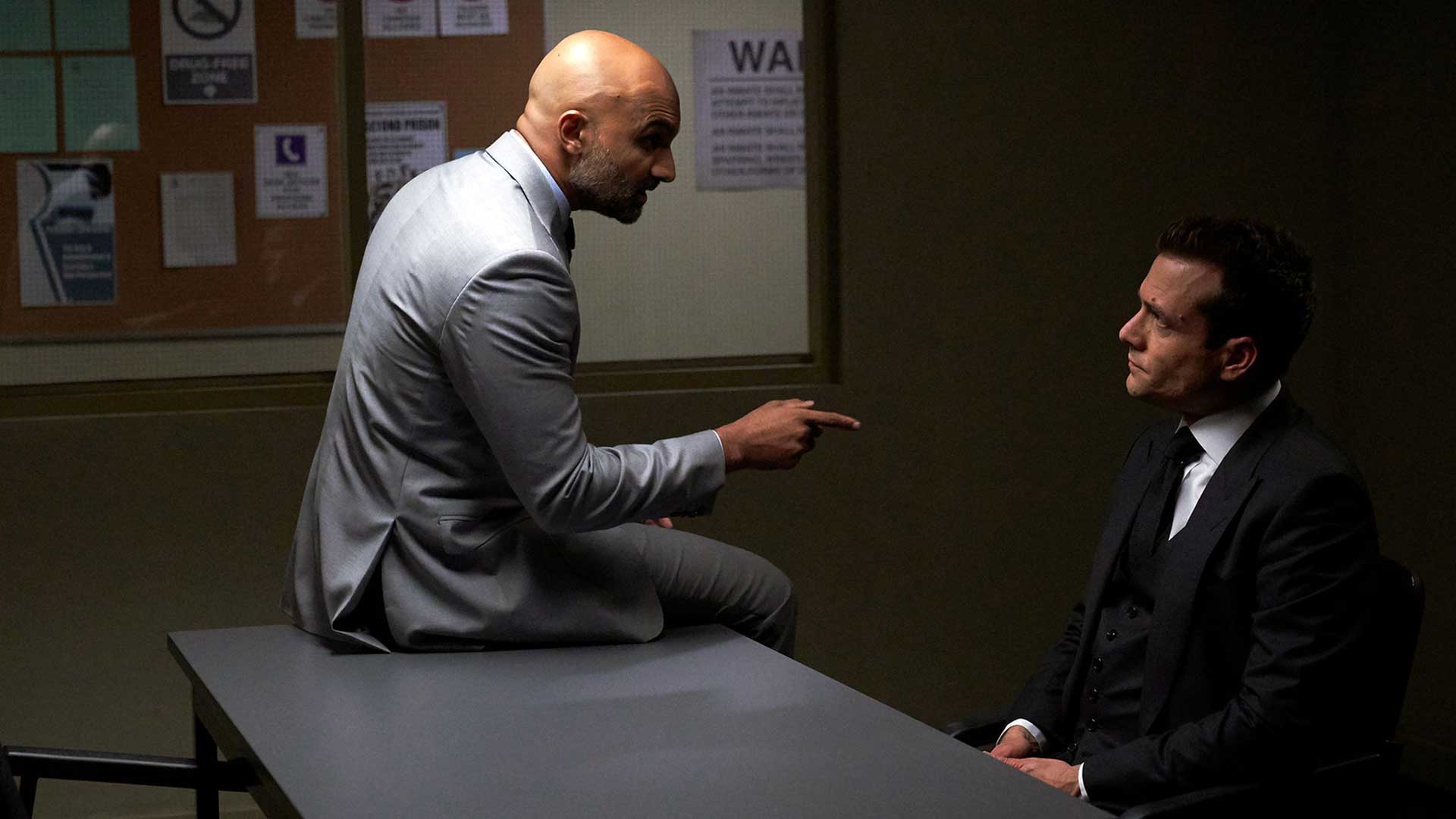 Suits utilized the classic Prisoner’s Dilemma, interweaving it into both its pivotal conflicts as the narrative saw Harvey’s close brush with a prison sentence for colluding with an old acquaintance. Louis Litt’s sister Esther returned to seek her brother’s help to bail her out of a merger she doesn’t want for her company for some intensely personal reasons. And the episode closes off nicely with bittersweet moments that are sure to spark some discussion about their necessity of inclusion.

The showrunners sure weren’t kidding when they said they’re going to bring back a lot of the old players. This week saw the return of Sean Cahill who Harvey had unwillingly teamed up with to bail Mike out of prison (yes, that infamously not-so-well received storyline). Turns out, a certain Andrew Mallick who’s been hellbent on getting back to Harvey Specter for some vendetta of his digs up that conflict and cooks up a testimony that could put Harvey behind bars. He holes up both Harvey and Sean in separate rooms trying to break one of them by sowing seeds of distrust, using a conflict that gives the episode its name.

In a slightly more personal battle, Esther doesn’t want her company to merge with another one run by her ex-mentor Paul. Turns out Paul preyed on her and assaulted her 15 years ago when she was 28 years of age and Esther kept quiet about it for fear of losing her job. This subplot is an obvious nod to the recent #MeToo movement where big people were revealed as sexual predators and assaulters and women ganged up to expose such men and bring them down. As Esther fights an internal battle of whether or not to come out, an act that as she said would lead her to be questioned and treated like a meat grinder, Samantha and Katrina try and dig up dirt on Paul. No prizes for guessing if the succeed, although in the process of coercing some execs to come clean about Paul, they utilize the same dilemma in the episode’s title.

For sure, this episode was a good return to form after last week’s detour. It kept the players in the game and while Faye Richardson’s role was reduced drastically, the central conflict still revolved around characters we’ve seen or met before. Admittedly though, Harvey’s subplot did feel a bit rushed. In the space of a single episode, he went from the verge of being sent to prison to being convicted free to (spoilers) facing the climactic reveal that he had lost his mother to a heart attack. It’s often this rushed drive of its narrative that makes me cease to take any consequence seriously since it’s pretty much a given that the characters will be written out of it in no time.

Amy Acker returning as Esther at least brought a topical issue to the fold. There are some pertinent points to be made, such as how things have changed now and women are believed a lot more in regards to these things than they would’ve been a decade ago if they came out. The back-and-forth between Esther and Louis was enjoyable and even if we haven’t really caught up with her in a while, it was refreshing to see her brought back to the fold.

I’d like to take some time to talk about those final moments so naturally, spoilers. Louis proposing to Sheila was a moment that tugged along your heartstrings. When you look back, it’s been an amazing journey with Rick Hoffman, from the goofball loudmouth guy with an obsession for nude mudding to finally accepting his responsibilities, developing patience and wanting to start a family with Sheila. It was a perfect cap for Litt’s journey and hopefully, the final two episodes could build to a Louis-Sheila wedding, much like Mike’s wedding with Meghan Markle’s Rachel back in Season 7.

The unexpected news about Harvey’s mother though, I have mixed feelings about. On the one hand, it felt way too sudden, forced and out of nowhere, a plot point that had to happen because it was written that way; unless I’m failing to recall, Mrs. Specter had no issues to warrant a heart attack. Then again, there was some tiny bit of foreshadowing with last week’s episode also closing with Harvey sharing a quiet moment with his mother. Looking at the bright side writing-wise, these developments help sell the notion that even to these big-shot lawyers, life just happens. Where one is experiencing a moment of happiness, other is handed a poignant blow. It goes to show the unpredictable nature of life’s developments and makes Suits feel that much more closer to reality, even though it’s far away from it.

So on the whole, a fairly competent episode that once again tucked away old foes, closed out some lingering issues and pits our lead characters for a solid closure. For a change, it’s Louis who’s experiencing a moment of joy as opposed to Harvey. Also, it looks like Faye could be warming up to realizing Harvey’s value in the firm judging by a brief look of realization she gives Donna. The frenetic pace at which things get tangled, then resolved does take out some of their impact, even as the show remains a fun watch.