The Boys returns on Amazon Prime with its twisted, screwed up take on superheroes. 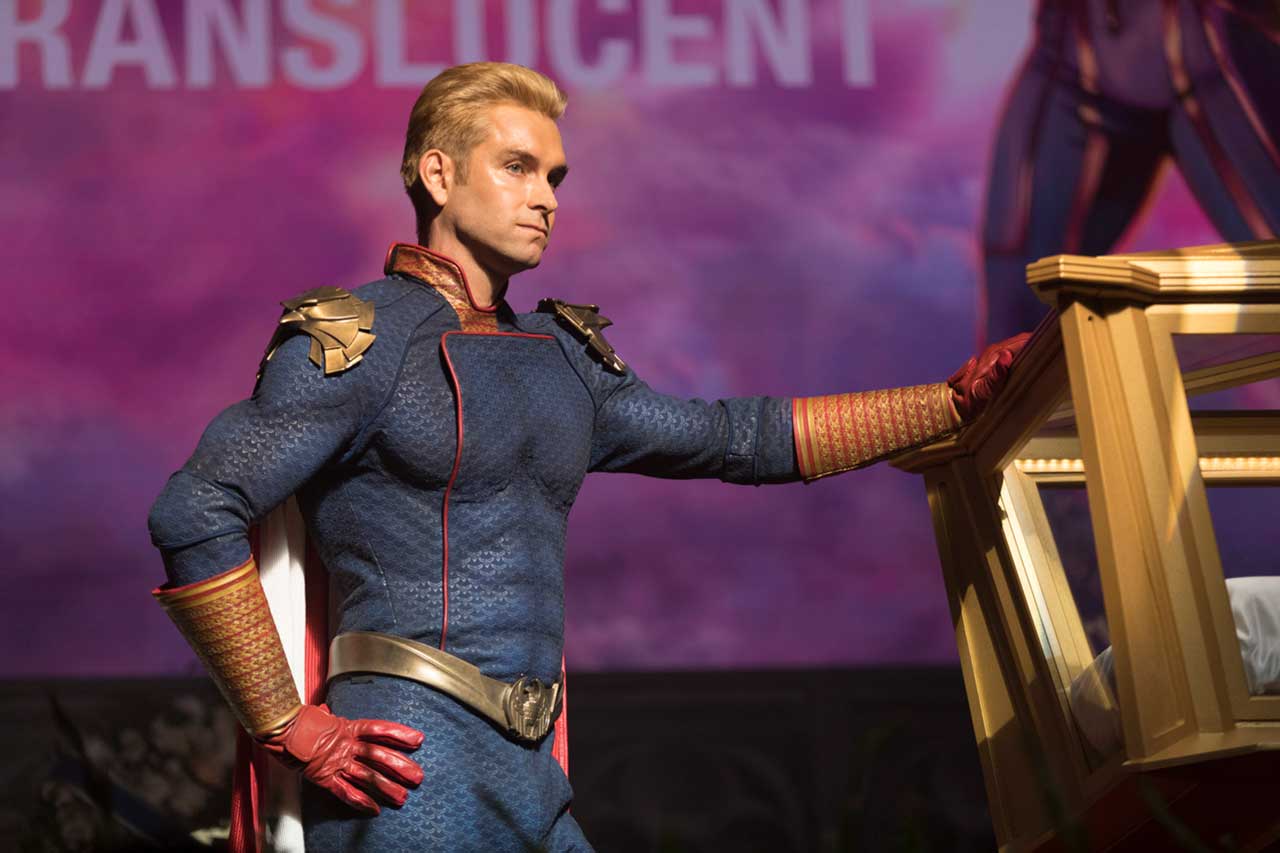 It’s been a long 1-year wait but The Boys is finally back. For those with fading memories, The Boys presented a world replete with superheroes, the finest of which are managed by a multinational conglomerate Vought. The most prestigious superhero team, The Seven, comprises that lot. These however, aren’t your noble heroes that save the world but ones that don’t give a damn about the destruction they wreak or the collateral damage of human lives that ensue as a result of their actions. Unbeknownst to most them, a chemical Compound V is responsible for their superpowers and it’s the only weapon the everyman has at taking them down.

Season 1 left us with a terrific cliffhanger with Billy Butcher realizing that his wife Becca is not only alive but has been raising their son with his arch-enemy Homelander, the evil Superman. Or is that Homelander’s son? It’s still left unclear since we never truly return to that cliffhanger but resume what looks like a few days after that event. Butcher is a wanted man now for murdering Madelyn Sitwell (the one who was fried by Homelander). Terrified of their involvement with Butcher, the show’s real Boys – Hughie, Mother’s Milk, Frenchie and The Female – are hiding in an underground bunker of sorts that looks like it’s placed within a comic book store (neat). Their only chance at taking down Vought – expose the truth about Compound V to the world.

But it’s not that easy. As if Homelander wasn’t enough of a threat to deal with, Vought has its CEO Stan Edgar at the top. Played marvelouslly by Giancarlo Esposito channelling every bit of his Gustavo Fring from Breaking Bad, Edgar is a no-nonsense hard, stoic businessman who has no interest in the supes. “We’re a pharmaceutical company”, he tells Homelander in a tense stand-off with the hero and is not afraid to look him in the eye and shoot him down. His presence only reminds us viewers of the uphill battle the ground-level Boys have to fight to set things right. It’s a long tower indeed.

As we’re reintroduced to the older players, the newer ones are spotlighted in a scene or two as well. Perhaps the most prominent of these is Aya Cash’s Stormfront, yet another no-nonsense badass with a devil-may-care attitude who looks like she’s ready to take every Vought hero head-on. Homelander is rattled by her presence, a brilliant play of vulnerability by Antony Starr, and that’s saying something about how much impact Stormfront has. She represents the quintessential unafraid, undeterred millenial, using modern tools like social media to do her own publicity as opposed to Homelander’s old-school approach of filming big-budget productions for adverts. That stark contrast should play out an interesting duel in showrunner Erik Kripke’s world.

Gecko is another fascinating hero, if not so much for his powers then surely for how he uses them for S&M. It’s a repulsive scene that eerily fits well within the world this show has created. To see a guy release his sadist, violent fantasies by slicing Gecko’s hand that regenerates on its own is yet another reminder of the world this inhabits, something that was gloriously presented in Season 1. I’m taken aback but elated that as much as the show is refraining from using the excesses of Garth Ennis’ source comic, Amazon’s The Boys isn’t turning down any of its gore or disturbing ideas in service of a tempered audience.

Bits and pieces of this vilified world continue to shine through. Billy Butcher’s supposed murder of Sitwell is the subject of over-the-top reenactions by Chris Hansen who appears as himself. Focus groups help decide which tagline sounds right on a promotional advert meant to showcase The Seven’s assistance to the army. Homelander vetoes “Saving The World” for “Saving America” because “Americans are gonna keep us in the fucking army”. And anyone who ever so much as begins ratting out Vought will suffer dire consequences, seeing which your head will explode (pun definitely intended). It’s a mad, mad world and yet somehow, it only feels like a believable, amped up version of the crazyness we’re going through in 2020.

We don’t get to spend much time with many of our heroes like Hughie and Frenchie although scenes depict their derilict state of mind rather well. A montage nicely contrasts the lives of Hughie and Annie (Starlight) as they go about their daily routines in different poor and rich setups that serve as an evil play on class and possibly a Parasite homage? We do revisit The Deep who’s been going through a depressed phase of sorts after losing his position at The Seven and is introduced to the Church of the Collective, a quasi-religious therapy group led by Carol Mannheim. We spend the most time with Homelander who continues to be the evil, psychopathic presence that he’s always been. He spins the gruesome death of Translucent as a personal tragedy, maintaining the facade that his publicity department has propagated throughout Season 1. Nowhere is his pure evil demonstrated better in this episode than the sequence with Blindspot – a Daredevil-clone – that’s too sudden and shocking to spoil here.

The Boys has always had astounding production values and the Season 2 premiere doesn’t disappoint in that regard. Cityscapes abount with shots of the Vought tower contrasting nicely with the small store under the depths of which our ordinary boys are situated. Explosion effects are convincing, as is the gore. The cinematography continues to impress and there are some really nifty shots in the opening sequence where Black Noir takes out a team of super-terrorists – the shot of his face impressively seguing into his severed head. And despite running for over an hour long, the episode is tightly edited and done before you realize it.

The Boys is off to a great start in The Big Ride. Season premieres are an interesting hit or miss since they’re so much about table-setting and moving the pieces together. But The Boys does a great job of reminding us of the stakes and juggling its many, many moving pieces together effortlessly to create a cohesive whole. It’s a shame there are only three episodes to watch and review this week since Amazon has realized it has a winner on its hands and wants it to be the talking point for the entire month.