Kashmir turns out to be a hellish paradise of sorts for our characters in this Family Man episode. 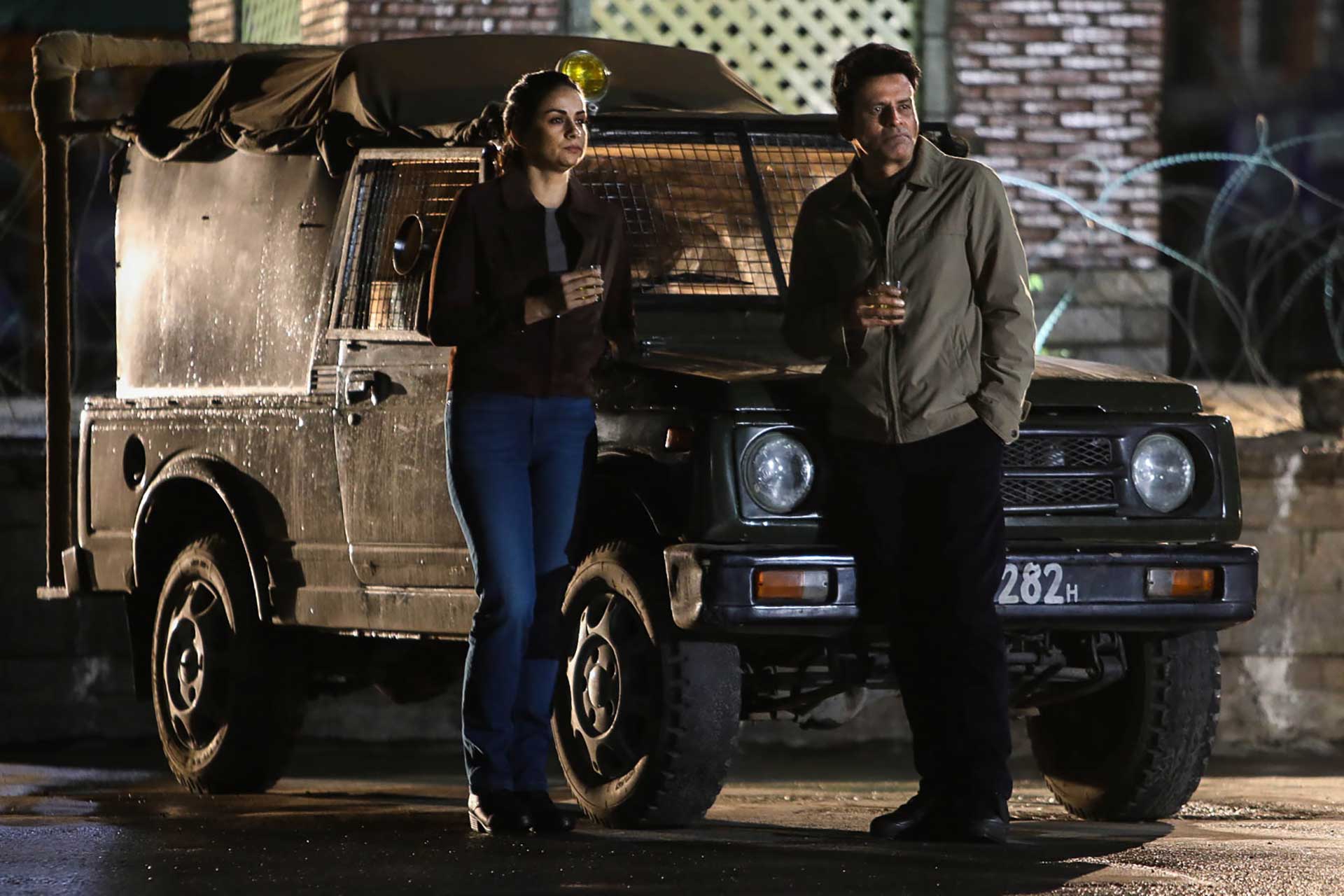 Despite its title, Kashmir proves to be far from a Paradise for our characters in the seventh episode as Srikant and Saloni struggle to nab a suspect for interrogation. A curfew is imposed subsequently as the cops find it difficult to wade the waters of a politically unstable climate. Meanwhile, Suchitra gets a little too comfortable in her new job to mixed results.

The centerpiece of the episode was Bajpayee’s Srikant and Gul Panag’s Saloni and their team going on to nab a certain suspect named Bashrat. The build-up to the sequence is fabulously managed, right from their arrival to Srikant’s impulsive infiltration of a local Kashmiri wedding where Sajid, the suspected insurgent is furious to learn more about his mission. While there isn’t a one-take sequence (understandably so), a lot of hand-held camerawork is at play as Srikant identifies Sajid from his capture in the second episode and a thrilling foot-chase ensues.

After everything that’s gone down, Srikant is ever so desperate to nab these terror threats at whatever cost. The end result is someone driven a lot more by the drive to get things done with little regard for protocol or the area’s political turmoil. Thankfully Gul Panag’s Saloni is a lot more sensible in that regard and manages to douse a fire that Srikant caught himself within. Were it not for her, he’d be a victim of the region’s rock-pelting.

The filmmakers also take some time to comment on the political situation in Kashmir via the characters. Attempts are made to draw parallels between the insurgents and cops, with the reasoning that each party’s desperate actions make them no less similar than the other. The imposition of random curfews comes at the cost of children being unable to live a normal, free life and our duo wonders if it’s worth it amid all the unrest. Some of it hits hard, some feels forced, but overall it’s a decent attempt at bringing to light the issues plaguing the region with a somewhat fresh take, given the countless movies that have already shed light on the issue, albeit in a melodramatic, hackneyed way which The Family Man avoids.

At this point, I regret missing out on mentioning just how arresting the background score really is. Ketan Sodha has composed most of the orchestral score and his limited filmography reeks of quality stuff. At this point it’s hard to pin-point how much of Hollywood inspiration the score draws but it definitely sets the mood for thrilling, captivating sequences rife with tension and an escalating build-up. The entire infiltration of the Kashmiri wedding is well guided by the highs and lows in the soundtrack that help you navigate the event’s different developments. Just overall, his work aided by Divya Limbasia has been exhilarating and I hope Amazon is considering releasing the soundtrack as a score (or maybe they already have on Amazon Prime Music).

The developments at Suchitra’s job and life pale in comparison but they help bide some time. The episode is relatively light on light moments and Suchitra’s and Arvind’s romantic subplot seems a little forced, although it would make for an interesting dynamic between the two. A mystery still remains about Arvind’s wife’s whereabouts. Given Suchitra’s character, it’s less likely she’ll sacrifice her morals and side with Arvind no matter how much of a dream husband he seems at this point. I’m pinning my hopes on Suchitra patching things up with Srikant and maybe even being of some use to him given her extensive background in psychology or her understanding of South Indian dialect (she could help decode Moosa’s conversations).

So again, a somewhat slow episode but still an entertaining one. The Family Man for me has now delivered 7 straight episodes, each worth of an 8 score. That’s quality I generally expect from Hollywood shows. For what it’s worth, regardless of the outcome of the final three episodes, the show has already won a spot in my books.