the walking deadTV Show Reviews
By Divij Sonak On Nov 8, 2018 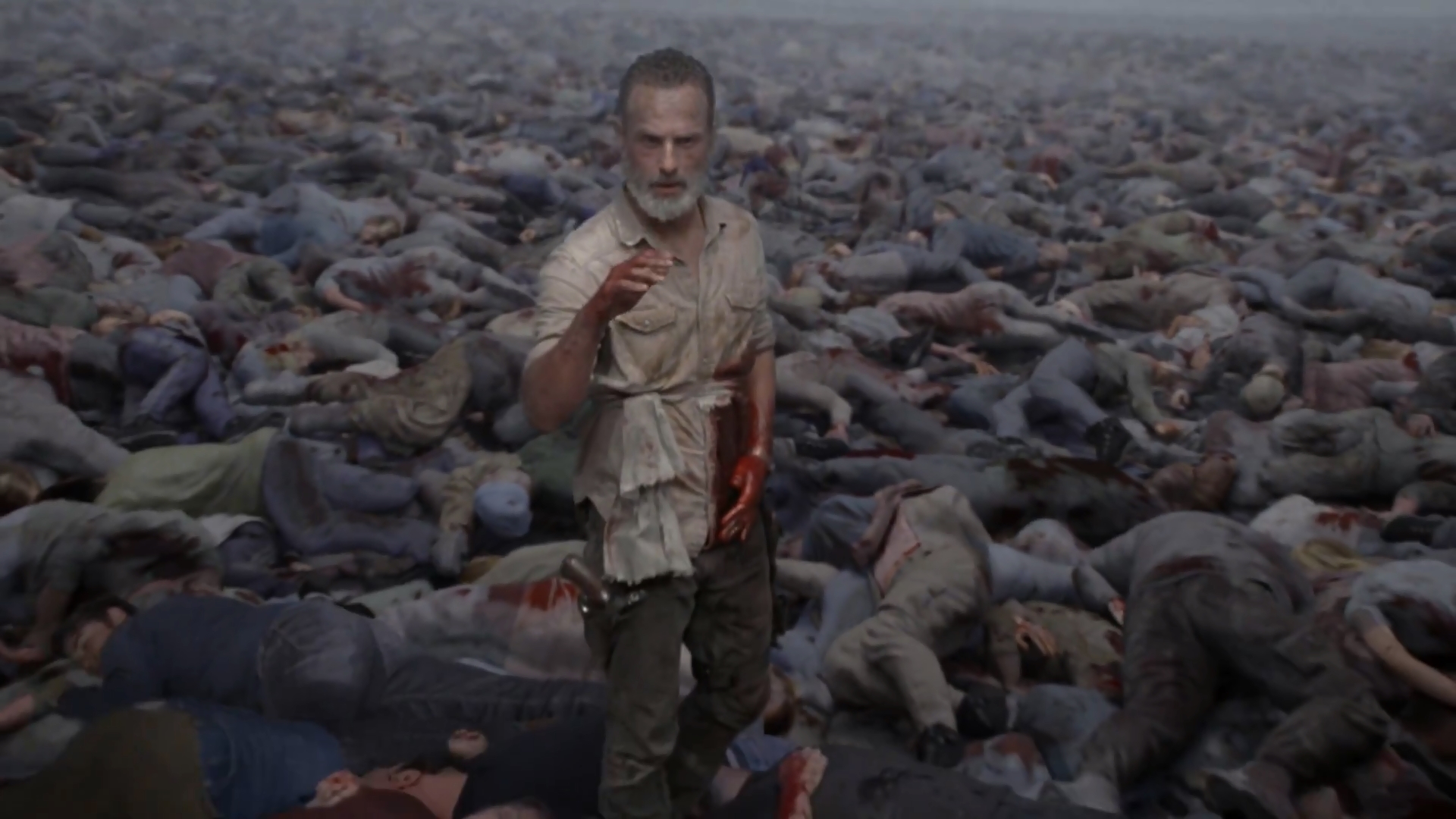 Well, that’s hardly a spoiler now. Considering how The Walking Dead ended its last episode with Rick impaled on a rebar, struggling to get out, it was quite clear whatever followed would serve as Rick’s swan song. The character who’s in more ways than one considered to be the show’s lead despite its ensemble cast and wide assortment of characters and the one who’s been through this journey right since its pilot episode was all set to bid goodbye to the show and it sure as hell was a poignant moment. The showrunners, fully aware of this fact, meticulously set the stage to ensure Rick’s departure from the show had enough time to sink in with the viewers.

By strategically having Rick’s fate clearly foreshadowed at the end of Episode 4, the writing-directing team led by new showrunner Angela Kang gave viewers a week to discuss, debate and accept that Rick was going, no matter what. Sure, the internet was abuzz with theories around his disappearance, including whether he’d actually die, and all that time meant people had enough time to deal with the loss. And given how monumental of a role Andrew Lincoln played in the show, it was only natural he got an entire episode devoted to his farewell, which kind of informs the basis of the show’s structuring.

Most of the episode sees Rick Grimes on the run from a massive horde of walkers, with visions of certain key people in his life conversing with him through some form of lucid dreaming and urging him to wake up and carry on. Given how long Rick’s been on the show, as well as the sheer number of people the show has killed, there was no shortage of prior characters to summon. Writer Scott Gimple and showrunner Angela Kang settled on Shane, Herschel and, of all people, Sasha. We’ll get to her in a moment.

Shane brought out Rick’s primal instincts, reiterating that his way was the best way to move on in a world infested with dirt and devoid of morals. Herschel was at the other end, encouraging Rick to never give up and carry on despite the sacrifices he had to endure along the way. Both are seen interacting with Rick through sequences reminiscent of the show’s early episodes; in fact there are direct callbacks to the pilot and the second episode Days Gone By with an iconic sequence of Rick riding a horse and leading a herd of walkers into the city nicely mirroring his present stage where he’s doing the same, but heavily wounded.

The most bewildering choice of course was Sasha’s inclusion. I read Angela Kang’s explanation of how Sasha allowed them to impart a piece of wisdom in Rick that some of the more obvious candidates like Carl and Lori or even Glenn could never have and how, with either of the latter present, Rick would’ve simply stopped running away from the walkers. That logic feels a bit hollow, especially given how Michonne makes an appearance towards the very end yet motivates Rick successfully to continue a bit further. I’d narrow Sasha’s choice down more to scheduling conflicts than anything else, but it was still a strong moment with Rick surrounded by corpses of familiar faces echoing the cover of The Walking Dead’s Issue #100. Terrific stuff.

In the hoopla surrounding Rick, one almost forgot that this was potentially Lauren Cohen’s last episode as Maggie Rhee as well. While it’s never explicitly mentioned, presumably due to the show’s structuring and time constraints, Maggie won’t be seen in the remaining episodes. Which is why it made sense for her to pursue Negan and get her share of closure when she saw a hopeless Negan begging to be killed, even going so far as to provoke Maggie into killing him. That’s when it hits Maggie that Negan is in a state far worse than he could be dead and that death would only serve to liberate him of his woes and would consequently go against Maggie’s objective to make Negan suffer. She realizes that his suffering is in staying alive and comes to peace with her revenge, neatly sealing off her arc before she departs for good.

Greg Nicotero was the obvious choice for helming an episode of this caliber. He’s known for handling most of the show’s bookend episodes and brings a unique flavor to each episode with his stylistic and offbeat directorial choices and unusual camera angles. He continues that trademark peculiarity in an episode that very well deserved it, which is mostly why you get this weird narrative and off-the-charts visuals, putting Rick Grimes right back in environments from the first few episodes. The walker herd is equally impressive, as is the way Rick takes them down singlehandedly, giving us a pretty intense and ambitious visual effects sequence. And the fact that all this happens in the middle of the first-half run of Season 9 and not in the mid-season or season finale is fresh air in itself; this is usually stuff that The Walking Dead does in its bookending episodes.

I was almost tempted to give this episode a straight 10, were it not for the final few minutes. In what felt like a cop-out, Rick was found washed ashore on the banks as Anne / Jadis takes him in the mysterious helicopter, referring to Rick as a “B” and a better proposition than the “A” that Gabriel was. None of it makes any sense, and isn’t supposed to; rather, it’s just a setup for a series of spin-off movies (yup) featuring Andrew Lincoln reprising his role as Rick Grimes and continuing his story in a totally different part of the zombie apocalypse world. To me, it felt like the showrunners chickened out on bumping Rick off and I kinda felt cheated after the emotional crescendo it so brilliantly builds up in its penultimate minutes. Oh well.

The big shift happens in the very final moments when we see a band of strangers, all characters in the Walking Dead comic, rescued by a now older Judith (older as in, Carl’s age in the show’s early episodes). That was a great way to end on a high, signifying a six-year time jump and leaving open a plethora of questions that you just can’t wait to know the answers to by tuning into. Next episode should be exciting as we learn the state of the community six years after Rick. What’s great to hear is that the arc with the Saviors, Negan and the War is (finally?) over(?) and for all practical purposes, this is a fresh start. Or is it?