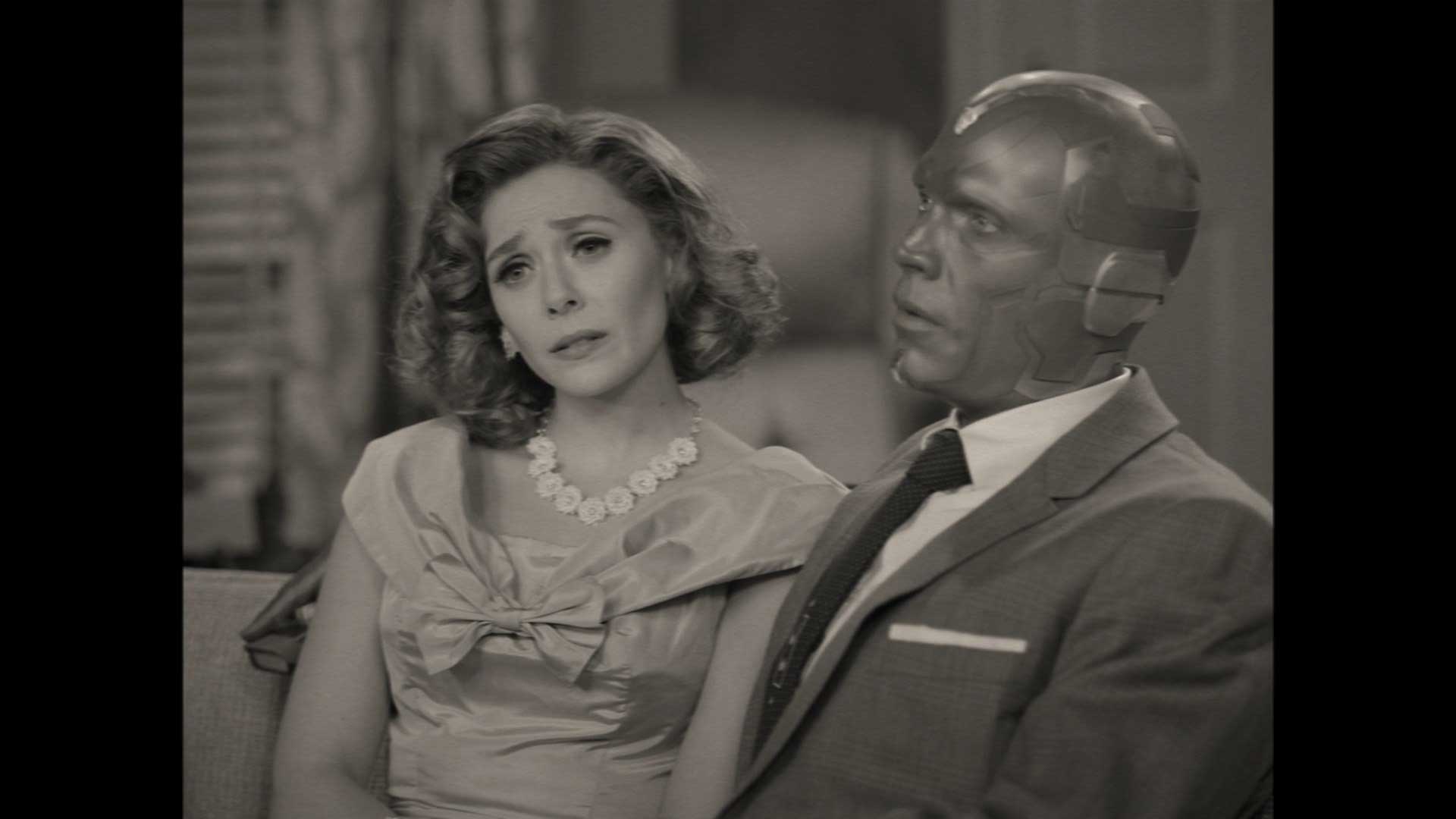 After a year and a half spent with no MCU content, fans have been starved to see where the shared cinematic universe goes following the game-changing events of Avengers: Endgame and Spider-Man: Far From Home. Thanks to Disney’s homegrown streaming service, that wait ended as WandaVision premiered on Disney+ this week with its first two episodes. That alone should be cause for celebration. Thankfully, WandaVision shows promise with its concept and treatment even as some of the sitcom tropes tend to not age so well and fail to induce the out-loud-laughter that its audience delivered.

By now, hardcore MCU fans would already be familiar with the show’s central conceit. Somehow, despite Vision’s demise at the end of Avengers: Infinity War, both Wanda and Vision find themselves in a 50s reality living it out as a husband and wife. Their escapades range from entertaining Vision’s boss, Mr. Hart, for dinner or participating in the town’s talent show to impress and win the favor of an influential local. All through, enough hints are peppered to suggest that reality is not as it seems and Wanda is messing with things knowingly or unknowingly to keep the illusion alive.

The show’s most talked about aspect would undoubtedly be its sitcom roots. It begins with a glorious transition from the colorful Marvel Studios logo we’ve grown so accustomed to seeing in theaters to the black and white 50s style logo with mono sound. It’s shot in a 1.35:1 aspect ratio with real sets and mostly still cameras which only track and pan when something is amiss in Wanda’s illusion. A laughter track accompanies both the first and the second episode and behind the scenes tidbits suggest this was accomplished with friend and relatives of Marvel top brass attending the live tapings.

While little is seen of the world outside, there are hints of stellar production values already, as is evident in the final screens of Episode 1 depicting Wanda’s reality being controlled by someone akin to a TV set. It’s tightly edited and despite a lot of the jokes not landing as well as I would’ve hoped – thanks to changing times and differing sensibilities – the episodes flow by smoothly and fast. That showrunner Jac Schaeffer and director Matt Shakman have handled the episodes with such a flair and authenticty for the 50s style is commendable indeed. Time flies by and the episodes are over before you realize it without unnecessarily bloating the storylines.

At this point, there’s little to dissect about Wanda and Vision’s characters but you do get a sense of the naive, innocent looking couple that they make. It’s evident both Elizabeth Olsen and Paul Bettany were having a great time on set, with Bettany even getting to play Vision a little drunk. The scenarios they find themselves in would’ve been unimaginable in the traditional MCU which suggests just how far the studio is stretching beyond its comfort zone. We also meet Teyonah Parris as Geraldine in the reality and since we all know she’s been cast as Monica Rambeau, I’m looking forward to seeing how that reveal plays out.

By far the most believable outcome is Wanda exhibit a sense of panic whenever her reality is called into question. Whether it’s Mr. Hart, who chokes on his food when he doubts Wanda’s story or Dottie who crushes the glass in her hands when Wanda freezes upon hearing radio signals inquiring about who trapped her, every time Wanda finds herself in trouble, reality corrects itself to work it out in her favor. She desperately wants to live a normal, old-school life with Vision, without anything to do with their superpowers and struggles to keep Vision’s drunken impulses in check when he showcases one magic trick after another that threatens to reveal his superhuman abilities and break the illusion of their carefully constructed reality.

With 9 episodes in its first season, it looks like Marvel is playing the long game when it comes to revealing truly what’s going on. As a result, the sitcom aspects take centerstage. Any elderly fans of the MCU would certainly be able to relate to some of the tropes, the overindulgent acting and accents and the louder than life depiction of even the smallest of occurrences. Subtlety isn’t really the game here, neither was there any intent to make it so. With colors being introduced towards the end, we’re probably taking a jump to the 70s in Episode 3.

What works with WandaVision is that despite its uncanny setup, it’s so quintessential Marvel. There’s a hook and we as fans know that something bizarre lurks beneath the look. You have the cool opening logos, updated to include clips from Endgame, the standard stylized credit montage towards the end and the classic cameos from familiar names with Stark Industries and Stryker. You almost feel happy for Wanda and Vision getting to have a great time despite what they’ve been through and yet, you can’t help but get impatient at seeing more of the show. The comic references are minimal but I’ve got to hand it to the creative team for figuring out a way to include Wanda’s skimpy outfits into the narrative without overtly sexualizing the character or making it feel out of place.

Perhaps a traditional binge format would’ve been helpful but I’ll gladly take the week-over-week wait for the time being. For now, WandaVision premieres to a good, if not staggering start and I remain excited about the possibilities in store.

WandaVision Season 1 Episode 1 Rating: 7 out of 10