The patients are running the asylum now. 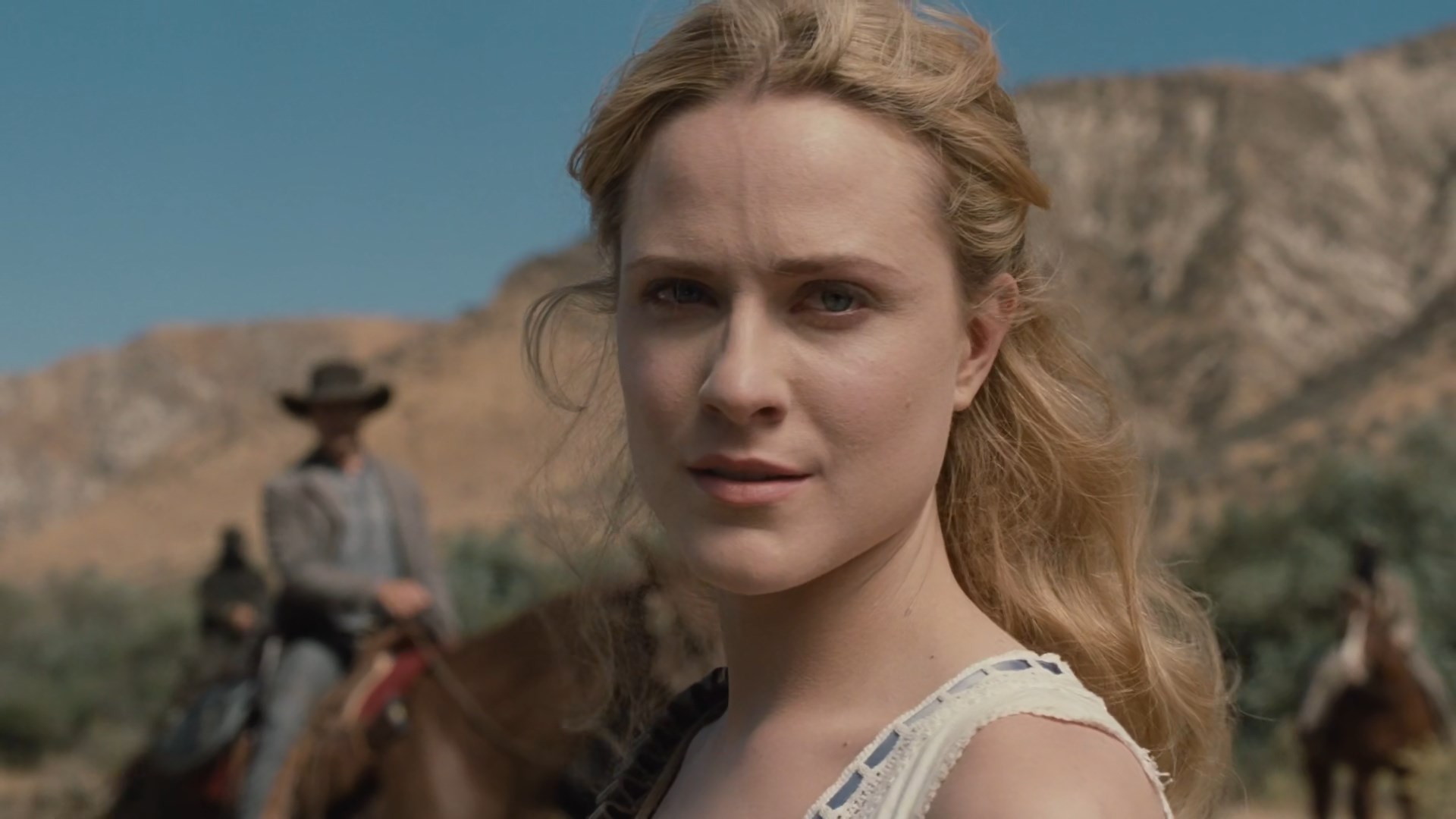 The hosts finally have their violent delights. Westworld Season 2 returns after a nearly year and a half period hiatus that gave its writer-duo Jonathan Nolan and Lisa Joy enough time to hash out the scripts in advance, avoiding a production snag as in the first season. The storylines are consequently hashed out well in advance, and if cast statements about them shooting with multiple units and different crew in the same day are true, the plotting is going to be spread out across the 10 episodes. To make things easier though, the showrunners make one aspect clear right off the bat: that there are indeed, multiple timelines at play here.

The episode begins with Arnold’s interrogation of Dolores that we’ve witnessed in bits and pieces all through Season 1. Only this time, to really drive home the time-setting, the scenes are shot in a 2.35:1 anamorphic aspect ratio to truly make them stand-out. The result is a far more cinematic look than the rest of the episode has, but it’s the conversations about reality and the meaning of it that are really the meat of the sequence. Dolores wants an answer to what exactly is real and Arnold’s response that real is simply what’s irreplaceable doesn’t seem to satisfy an ever-inquisitive Dolores. That curiosity and thirst for knowledge and learning is beginning to frighten Arnold.

Curiously, Arnold himself has a dream about being in an ocean and surrounded by bodies, or something to that effect, one that strangely enough comes true in the show’s very final shot. This casts some light on whether we’re really seeing Arnold talk to Dolores or the show’s messing around with us by implanting false memories in Bernard’s head. After all, since he shot himself in the head over Ford’s command, he’s been experiencing severe cognitive dissonance, time slippage and a host of other issues that see him be pretty much unsettled throughout the episode. And after Season 1’s time shenanigans, you’d be hard-pressed to trust the writers so easily.

Most of the episode takes place in the immediate aftermath of Season 1’s concluding robot revolution. We follow our leads as they have different responses to deal with the event. Bernard is undoubtedly the most shaken, in part seeing Dolores shoot Ford cold-bloodedly and in part due to grappling with his own realization that he’s a host whose identity is unknown to the park’s board members. We see him struggle with his split allegiances as he tries to guide the guests out safely, and yet is concerned about them killing other benevolent hosts in sight who are really his own kind. Jeffrey Wright handles those sequences masterfully and his Bernard is really the anchor through which we glimpse the events of Journey Into Night much like Dolores was for the entirety of Season 1.

But as devastating as the robocalypse is, there’s more important stuff happening behind the scenes that even Bernard, or I suspect Ford, had knowledge of. Turns out Delos Incorporated is being the new Facebook, secretly recording guests’ experiences and sampling and harvesting their DNA for use for some much bigger plan. As shocking as this feels, it’s pretty much in line with how you’d expect a tech company to act in the 21st century. Data is really the game here and it’s no surprise that Delos is following in the footsteps of Silicon Valley giants. Could Delos be working on cloning humans and have them infiltrate the world’s most pivotal places, where they could do the board’s bidding? And is that why the unarrived package of Peter Abernathy and the IP he’s carrying through embedded code is so important to the company that they’ve sealed off the park and forbidden any extraction until they have Abernathy safe and sound? This reeks of the makings of a sinister conspiracy plot that’ll be intriguing to keep a watch for.

Dolores at her end has fully gone Wyatt mode even as she claims to be discovering her true self, that’s somewhat of a cross between the ranger girl persona and the Wyatt narrative that Ford imbued her with. She’s finally unhinged of her restraints and is on a quest to find who she really is, as well as inform her fellow hosts of their possible sentience. It does look like not all hosts have awakened and gained consciousness and Teddy is quite possible one of them; he’s still following his narrative loop of wanting to escape with Dolores. But Dolores is executing real hosts in a biblical manner by hanging them over a cross. Evan Rachel Wood displays simultaneously, the menace and compassion of both her personas and uses them to create something fresh. I also have this lingering suspicion of whether Dolores is on a timeline from her past, following the events of her massacre 30 years ago where she killed Arnold but it’s too early to make guesses on that front.

As cold as Dolores has become toward her captors, Maeve maintains that shred of humanity that we’ve so often seen guests and the park’s staff lacking. Having made the choice to return back for her daughter, we find her bumping heads with Simon Quarterman’s Lee Sizemore who went missing in the final episodes of Season 1 but is back to much comedic effect. The back and forth between him and Maeve is reminiscent of the dynamic she shared with Leonard Nam’s Felix and while Lee is obviously a bigger douchebag, even trying to out her once, he still finds himself at her mercy. The sequences between them help drive the magnitude of the massacre as corpses of guards and administrative staff lie around like flies over a dead body.

Thandie Newton plays Maeve fully empowered and taking charge of the park. Arming herself with the ability to control other hosts, she now wants to find her fictitious daughter whose memories refuse to leave her. One has to wonder how much of it is really her own conscience and how much is just programming being used off-script. This comes to the forefront when she quotes one of Lee’s scripted lines back to him. In a moment of further empowerment and nudity used to dramatic effect, we see her ask Lee to strip fully naked, a stark reversal from the Season 1 days when the hosts were the ones without clothing.

The show’s third timeline is reportedly the one in the present, about 11 days after the big incident. Bernard is found ashore, with no memory of what happened in the last two weeks as he wakes up to a fine Ashley Stubbs finding him disoriented. Also entering the picture is Karl Strand, Operations Head, who’s been brought in to clean up the mess that the hosts have wrought upon the park. The time period of this entire sequence is subject to dissection and Wright’s Bernard is frequently seen glitching, trying to make sense of what’s happening around him as we get several clues and teases to what lies beyond the park. The biggest perhaps is the presence of a Bengal Tiger from Park 6, corroborating the Discover Westworld website’s reveal that there are at least 6 parks in all. Looks like hosts from each parks are crossing over.

The Man in Black, now openly summoned as William, is at the height of his excitement. Having finally unlocked a higher difficulty level in which the hosts do indeed fire back and kill the guests, he’s now beginning to enjoy the game for which he’s been visiting the park for such a long time. It’s almost as if the NPCs have gone off script and there’s no predicting their behavior, a consequence that thrills Ed Harris’ character. As much as he revels in the violence, Ford has another game in store for him that he reveals posthumously through a host image of his younger self as the boy from Season 1. If the first season was about getting deep in, this one looks like it’ll be about getting out, although this runs the risk of retreading some of the same choices from Season 1.

As we get sucked into Westworld’s mysteries, it raises a lot more questions of its own. What exactly does Bernard mean when he says he killed all the bodies lying along the sea? We saw Ford digging a massive site in Season 1 for his new Journey Into Night narrative; is this season really just an elaborately pre-scripted storyline by Ford? What’s his new game for Ed Harris’ Man In Black? It’s title, The Door, which is also the Season’s subtitle, suggests this is what he’ll be following throughout the 10 episodes. And what does Dolores want to show Teddy (by the way, that was Teddy on whom the camera zoomed under water I believe)? More questions, more mysteries.

The joy of Season 1 was a delight to be hand in decoding and theorizing the maze that Jonathan Nolan and Lisa Joy had planted and scripted for us. It looks like we’re going to be experiencing those same delights again. For now, Season 2 is a great start to what looks like it could be another thrill ride.

Wonder Woman 1984 Delayed To August 2020 Due To Coronavirus