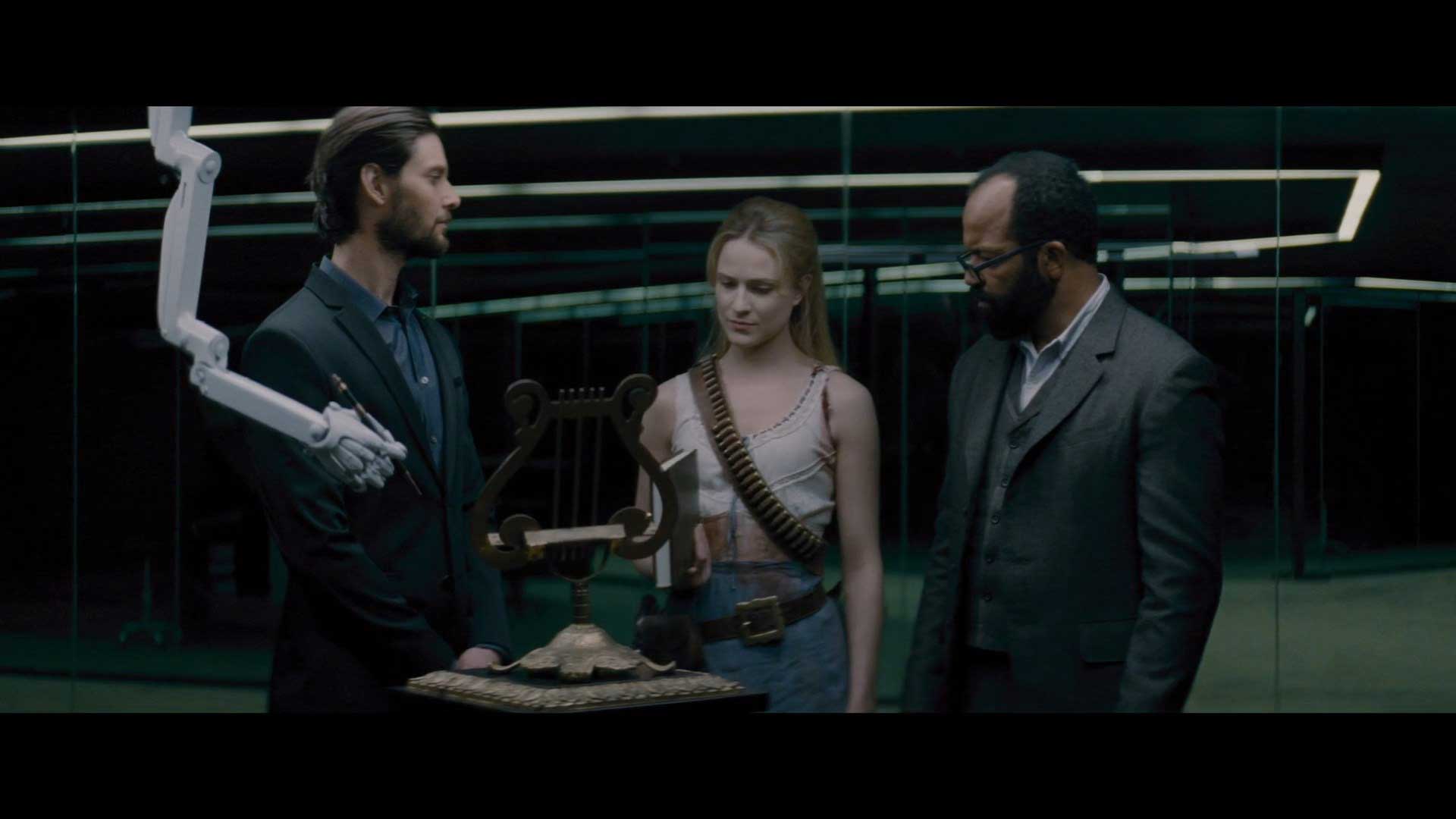 Oh Boy! The Westworld Season 2 finale is dense, packed with material, characters and subplots converging into a unified narrative. Timelines come together, expectations are subverted, and shocks and twists are thrown in classic Jonathan Nolan & Lisa Joy style. Both assume writing duties while series veteran Frederick O. Toye returns to helm an episode that rivals a cinematic experience in terms of its scale and scope as well as the amount of VFX work it employs.

With the season subtitled The Door, it makes sense that everyone should be led to something that at least resembles a doorway. Nolan and Joy takes this quite literally and present to the hosts, a door that leads them into a better world. One where they’ll be free from the clutches of the “evil” humans, a utopia of paradise if you will where no one will be able to touch them. And quite literally so, for this new world is an entirely digital one where hosts sacrifice themselves and their physical bodies to attain a place in this newfound kingdom.

The parallels with the Bible and stories of Moses or Noah’s Arc are far too coincidental and perhaps deliberate to ignore. The entire imagery of hosts marching towards a crack in the sky (which humans cannot see), leaping to their deaths to transcend to heaven, has undeniable biblical undertones and is perhaps the hallmark of most religions. To think that writers Nolan and Joy would spin this out to create a religious foundation for our artificial beings, their story of conscientiousness if you will, one that will go in their apocryphal theologies as the birth of their kind is at once fascinating and an exciting road to end the season on.

And where there is religion, there is war. And so more stark imagery follows as a hypnotized Clementine rides like the only horseman of the apocalypse, bringing with her war and death as she carries a mind control spell that pits hosts against each other. Charlotte and Strand have reverse engineered in her the same abilities as those possessed by Maeve and as one uses it to wage war, the other uses it to hold back quarrelling hosts as Akecheta takes home her daughter to safety.

This sequence, playing out in slow-motion, completes Maeve’s arc of a dutiful mother. Where in the first season, she merely sparked into consciousness by taking a call to save her daughter, the second season sees her sacrifice herself in order to escort her child to heaven. Whatever humanity she displayed at the end of Season 1 has grown by leaps and bounds as Maeve has let her choices define the path she takes. And that path is one of compassion and motherly love as she is willing to go to any lengths to ensure safe passage for her daughter. It’s a tragic ending to a strong storyline and while there’s always room to bring back anyone in Westworld, more so for a host, the madame that we know has wrapped her arc quite neatly.

Speaking of the other lady, Dolores actually teams up with her once lover (who she now remembers) William and the two head towards the Forge, the central repository where all guest and host data is kept. They finally connect with Bernard and I believe Jeffrey Wright and Ed Harris share screen space for the first time. It’s dynamite but Harris tries to outsmart Dolores unsuccessfully, resulting in his being left behind as Dolores and Bernard explore the Forge and the memories that lie beneath. They’re actually able to enter the system mainframe of sorts where they’re greeted by the core program, this time played by Ben Barnes.

This is where the shifting nature of the aspect ratios truly becomes clear (not that it wasn’t). The anamorphic ratio is used to convey a virtual world, a digital framework of the park with all its code, hosts and storylines intact, even as the physical, “real” world is portrayed in full screen. Barnes takes our characters on quite a ride, walking them through how exactly Delos aimed to accomplish the monumental task of implanting consciousness onto a host body, creating a human-host hybrid. The key insight revealed is that humans are deceptively simple to study and their life’s algorithm and decision-making capability can be summed up in the length of one book.

This is another step in the direction of simplifying things, which ironically is something the showrunners tend to receive criticism for. By taking their own experiences and weaving this reveal around it, the writers eliminate the complexity of human nature and realize that it’s strangely, quite simple to understand the basic fabric of human beings. Once hit with this idea, it seems the mainframe started doing better in deciphering its guests and storing vast swaths of their code, which now Dolores wants to wipe off along with a lot of the host data. Before Barnard stops her that is.

This is a long episode, about an hour and a half, the size of a feature film or a BBC Sherlock episode. Consequently, a lot is packed into it despite stuff taking its own sweet time to unfold. But perhaps the biggest shocker from the episode (spoiler) is the reveal of Charlotte being a host for a while. Fans had theorized that Charlotte could be a host and it seems that the writers took this theory and polished it, resulting in the reveal playing out a lot more satisfyingly in the final moments. That’s where the split timelines come into play and while it’s hard to say no one saw it coming, the writers do make adequate efforts to keep viewers absorbed in the remaining contrivances to distract them enough from when it actually is coming. Commendable.

What’s not commendable though is the cryptic lines Ashley Stubbs spouts to Charlotte Hale before letting her through security. It’s written in a way that implies Stubbs has been a host all along, while keeping some ambiguity open in case they decide to change their mind. Again, the reveal comes out of nowhere and literally looks like a last-minute twist the writers added in order to catch audiences off-guard. It betrays the character to a certain sense and makes Ford sort of this omnipresent god-like figure that is still orchestrating massive reveals from his grave. What it does do is explain some stuff that goes back to Season 1 where, thanks to some trick editing at play, one got the impression that Stubbs and a young William were in the same timeline. Well, now we know.

For what it’s worth, there’s a lot to unpack in this episode that’s best experienced than spoiled (even though I have really spoiled some big reveals). And not all of that stuff lands perfectly well, especially that post-credits sequence that, while tantalizing, puts into question major beliefs about the Man in Black’s sanity. But there’s no denying that the finale is ambitious in its scope and scale and tackles some heavy themes through powerful imagery realized beautifully through gorgeous cinematography and epic visual effects. It’s almost akin to watching a full-length feature film and that’s just one of the nine episodes Season 2 has had to offer. So for whatever the criticism leveled against the finale, I cannot deny these facts and thus, choose to score it accordingly. It’s a novel, fine piece of television that, despite getting occasionally muddled and murky at times, never loses sight of the overarching picture.