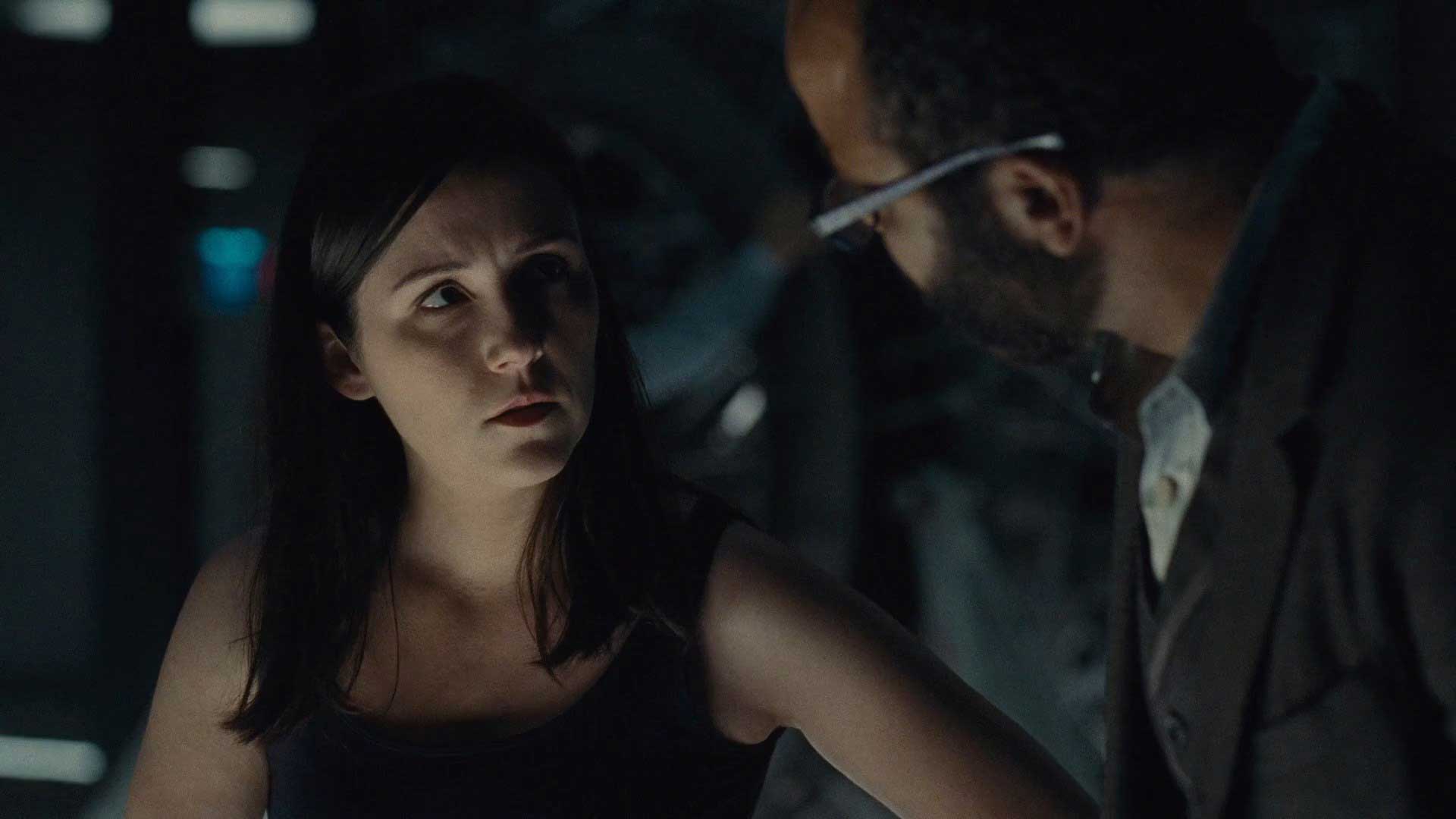 The episode begins with a camera panning around a room rather cryptically, stopping by certain objects of interest. To the tunes of a Vinyl record, a man is seen exercising in good spirits. That man, as we learn through a reveal, is none other than Jim Delos, now owner of Westworld and its neighboring theme park business. Delos is soon informed he has a visitor, our very own William (Jimmi Simpsons). William strikes a conversation with him and at once, we notice something is off. Delos is, for lack of a better word, glitching. This isn’t the first time the two are having this conversation.

That reveal is at once frightening and full of exciting implications for where Westworld Season 2 is headed. That Jim Delos commissioned William to put his mind inside one of the host bodies to prolong his life and attain some immortality of sorts puts him right square on the path of being a possible antagonist. And yet, Westworld isn’t interested in the traditional trappings of a “villain”. It’s looking for something much more. Which is why we get a reveal of this magnitude as early as the fourth episode.

The episode is helmed by co-showrunner Lisa Joy and co-written by her husband Jonathan Nolan. And at once, the flair in the direction is evident. The camera circling shot that opens the episode is unique, giving you a sense of a much larger space than what is available once you zoom out. More intriguing is the theme of circles. Whether it’s the Vinyl record or the tea-cup which Delos stares at in disbelief or even the shape of the room, the circular shapes are evocative of the nature of Delos’ own reality staring at him in the face. That he’s been living in the same loop day in and day out for a long, long time.

The episode eschews the multiple ongoing narratives in favor of two major subplots. Aside from Delos and William hacking the former back into consciousness, the other subplot involves Clementine mysteriously dropping Bernard ahead of a cave where he conveniently happens to find Elsie. Yes, Shannon Woodward makes a return and is alive and well after being attacked by Bernard in Season 1. Initially wary of Bernard, it almost comes as a relief to her that he’s a host that was under Ford’s control. The narrative sees the duo figure out an entrance to a secretive facility and uncover what’s been going on.

Elsie does appear a bit out of character in how easily she regains her trust for Bernard. But much like Bernard being abducted in last episode’s assault on the Confederados and being abruptly dropped at this location, this looks like it’s the show’s way of asking viewers to trust it since these plot points are necessary to arrive at the endgame. That mechanical approach is kind of why the episode loses half a point for me. But that aside, there’s some intriguing stuff happening with Bernard and his time slippages that I’m afraid are going to play havoc in the final few episodes.

Their discovery ties in with what Delos was attempting to do. The park has apparently been working on an ultra-secret project to imprint a mind’s consciousness into an artificial being, effectively being able to resurrect the dead. But who, really do they want to bring back? The obvious guesses at this point are either Ford himself or Arnold. Ford, because it would be not unlike Anthony Hopkins’ enigmatic and eccentric creator to do, to bring himself back up in the veil of immortality. And Arnold because it would be a next-level mind twister to see Bernard help bring back the real person whose identity he is based on. It could also explain some of the time slippages that are occurring in that Bernard might be mixing up his memories with those of Arnold’s at some other time frame. In fact, if he really succeeds, it could be Arnold partaking in some of the events we’ve been seeing here.

But the plot machinations aside, it’s fascinating to see the deeper implications at play here. One of the most heartbreaking sequences is seeing an older William confront Jim Delos and attempt to break him by revealing the truth about his family. To think that it’s been multiple decades and Delos’ wife is gone, his son Logan has overdosed, his daughter and William’s wife committed suicide, is just so messed up to comprehend that it really drives home the point of what good is it being alive when everyone around you is no more. Who do you even stay alive for? Is immortality a victory if it comes in the face of isolation and loneliness? Delos monologues briefly about cheating the devil and the bigger game he intends to play by winning death, but really what’s the point of preserving your life when those who you could share it with are no longer there.

As much as it glitches poor old Delos whose host mind simply cannot bear the cognitive overload, I suspect it also breaks William. That recital of what’s happened to all the people around Delos drives home the realization of what is left of his own life. He’s been spending the past several years presiding over the park, losing himself in the vanity of it all, sidestepping his own life. The park became his life and he’s now understanding it’s all for nothing. There’s a certain emptiness that grips him and in that moment he comes to terms with what he’s become: a broken man.

But that broken man has a moment of triumph in the park when he saves Lawrence’s wife and child from rape and slaughter by the Confederado head. Leaving aside the storytelling checkpoints that lead us to this moment, the underlying truth that this is the same wife and child who the Man in Black himself once killed to extract info from Lawrence reeks of the bigger question at hand here. When the hosts couldn’t fight back, old William saw them as NPCs trapped in a reality they didn’t script. But now that they’ve attained some level of consciousness and are actually going off-script, William actually develops a shred of empathy for them. So much so that, in yet another masterfully edited and shot sequence, he’s reminded of his own wife’s death at the impending doom coming the way of Lawrence and his family.

That a host could actually spark this compassion and nobility in William which he once actually had could perhaps be the ultimate game that Ford is playing. The one thing that the artificial hosts lack, that could prevent their acceptance into society is compassion toward their kind. But William proved that even the staunchest of hearts can feel the pain of these fake beings if they go sufficiently off-script. That’s one more sense then that these beings really are as human as humans themselves and when fragments of Ford’s programming speaks back through Lawrence’s daughter, it really is a self-reflecting moment for William albeit one of equal regret. That what he was in those moments, is the man he wishes he could go back to being, but is it too late for that now? Can one kind deed be a path to erasing the horrors of the past? Saving Lawrence’s wife now doesn’t undo the fact that he shot her dead before, neither does it make up for the evil he did in his own life outside the park.

Speaking of which, the final shot when he is greeted by Katja Herbers’ Emily who happens to be his daughter is a twist that fits so well within the realm of the show, I’m agitated that I didn’t see it coming. Like her father, she’s so absorbed into the park that even being rounded up by Ghost Nation won’t dampen her spirits. She’s even learned their language for heaven’s sake. There’s no way she could have been anyone other than William’s daughter; its one of those natural storytelling extensions there’s simply no disputing.

All of this further strengthens my doubt that these AI beings coming to life and the consciousness sparking through them is yet another form of a more advanced scripted narrative where the hosts seem to be making their own choices but really are just being thrust through yet another loop. Only this time, the guests are in for the ride too and they don’t even know it. This entire season is an elaborate distraction, a play titled Journey Into Night and while I don’t know what the endgame is, it certainly involves the control units, imprints of human minds, the guests’ DNA being harvested and the mountain of code that Peter Abernathy was carrying. Now if only the next few episodes pass by quickly so we can rush to this twist.

Overall, this was a fabulous effort by Lisa Joy who proves she has the directorial chops to help a Westworld episode. The entire hour was a lot more interesting thanks to the directorial choices, with the cinematography, editing and Djawadi’s score coming together in perfect harmony to create something greater than the whole. If this is what we’ve gotten in the fourth episode, I can only salivate at the prospect of what lies ahead.