Westworld returns to TV as a reinvigorated, reimagined show. 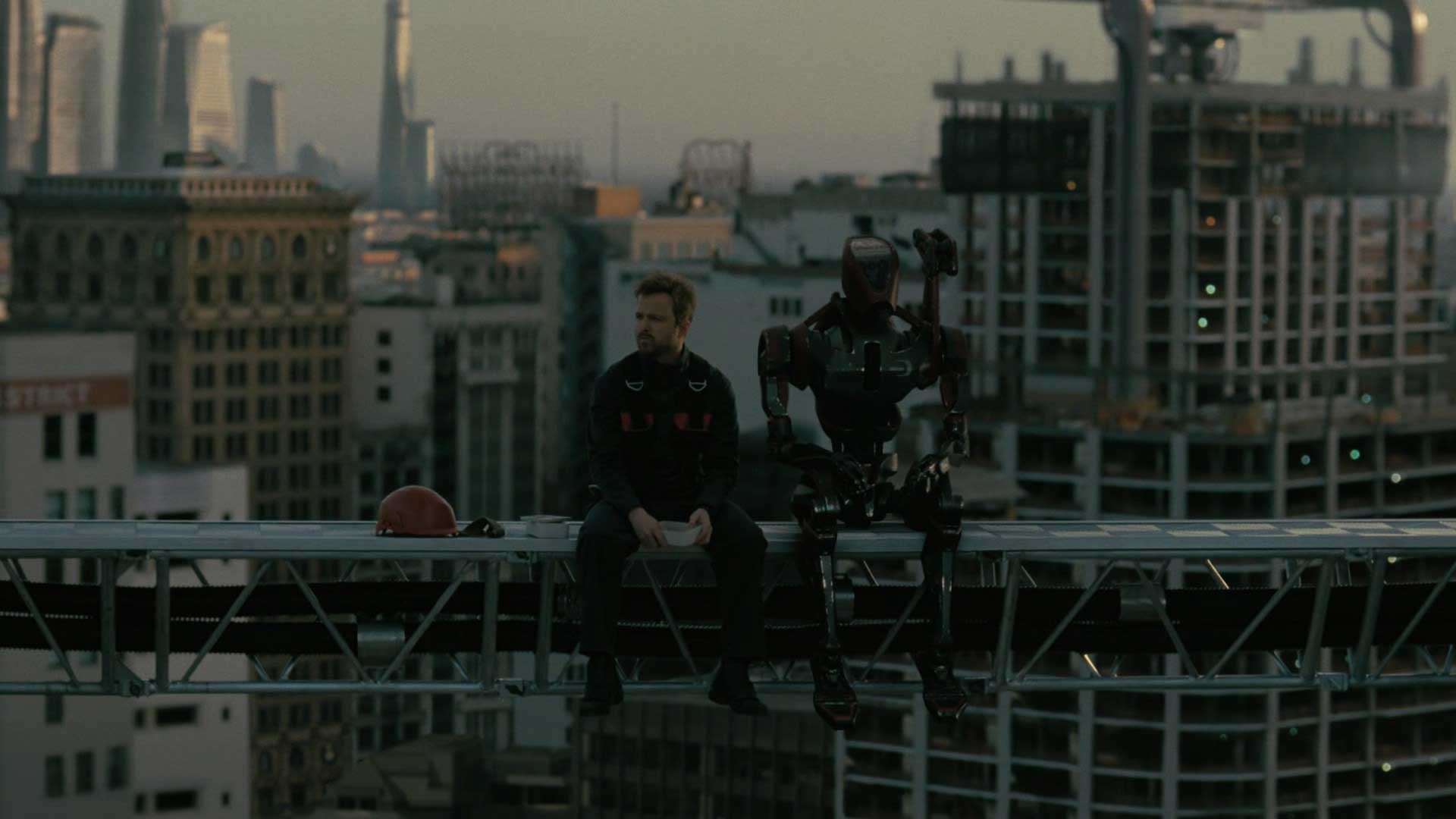 Westworld has always teetered on the bleeding edge of dabbling in philosophical debates. Much of the show has resolved around eschewing straight-forward action sequences, shootouts as well as traditional science-fiction chases and narrative frivolities in favor of situations that put two people in a room and force them to take sides in thought-provoking talk. Through the characters, the showrunners have largely been speaking via metaphors. That approach has delighted a certain sect of fandom that’s more intellectually stimulated while leaving the other set that thrives on high-octane plot developments flustered.

So it certainly comes as a bit of a surprise that Westworld Season 3 chooses to throw that out of the window (at least upon first glance) for a more, dare-I-say, conventional storytelling approach. The kind that movies like I, Robot or Terminator would take to a robocalypse storyline. The surprise is as much as the show ditching its propensity for running its episodes through conversations as it is for showrunners Jonathan Nolan’s and Lisa Joy’s commitment to sticking with their approach to confounded, convoluted storytelling even if that alienated a lot of their fans in Season 2. For those unaware, Season 2 was criticized as being needlessly complex, with its finale receiving the lowest Rotten Tomatoes ratings of any episode.

Nolan and Joy did indeed warn us about the show taking a different direction now that things have moved out of the park and into the real world and looked at a certain way, the Season 3 premiere does fulfill their promise. But just because it has a different approach to storytelling, it doesn’t mean Westworld fails to dazzle, delight and raise intriguing questions about the nature of our reality, free will and our relationship with the machines. Quite the contrary, this episode is packed to the brim with revelations about a different kind of world, one we inhabit for real in this show’s semi-dystopian but highly depressing future.

Guiding us through this new world is Aarol Paul’s Caleb. Once a veteran, now a construction worker, Caleb lost his friend Francis in combat and has been struggling to treat his Alzheimer’s ridden mother, who refuses to recognize him. He tries and makes ends meet via his day-job, which isn’t enough, so he resorts to petty crime on the side to make some quick cash to support her treatment. He attends therapy sessions to get over the loss of his friend which don’t work, and even tries out switching and nabbing a white-collar job in a prestigious corporate to bump up his pay-grade, but to no avail.

There’s a sense of cliched-ness to the entire set of proceedings when you look at it the way I wrote above. But it’s all presented in the context of a sci-fi future, with the trappings of technology, AI and other nifty devices having taken over. Despite his low paying job, Caleb still has a personal robot to assist him by his side (the G-257). Smartphones, Airpod-minis, wireless tech is nearly ubiquitous. And yet, there’s the sense that this world is rooted in our own, stemmed from the state of things as they currently are, which explains why ATMs still exist, albeit upgraded to include video-monitors spewing out tutorials and advertisements.

That balance, between making aspects of this new world futuristic, yet current, is what sets Parce Domine apart from other similar stuff. Tech is incorporated and built upon naturally. In one of the best and most creative plot points, the world includes an in-universe app named Rico that lists down petty and shady tasks that can be undertaken for a fee. It lists down map checkpoints, guidelines and steps to take care of for completing the mission, that often comprise of pick and drop kind of jobs. It’s heavily borrowed from Grand Theft Auto’s side-mission mechanic that would similarly give notifications about available jobs on mobile to its protagonist Nico Bellic. The similarities are no surprise considering how much of a gamer Jonathan Nolan himself is, but it nicely fits into the aesthetic they’re going for with this world. Even crime is driven by technology.

And amid this mishmash of tech we find Dolores, navigating the world now with a certain fierceness and determination to establish her place in it. Her introductory opening sequence sees her blackmail a high-profile Delos shareholder into granting her money and proprietary information about a corporation named Incite (likely Delos’ parent company). The sequence could’ve been a straightforward sneak, snatch and scoot but Nolan and Joy imbue it with much more depth and give us a detailed backstory of Gerald (Thomas Kretschmann, strong guest appearance) that explain his strained relationship with his “second” wife, his past at the Westworld park and his temper issues that led to his split with his first wife and her subsequent demise. All this detail in addition to giving us a taste of how far the world has advanced, with voice assistants now controlling every aspect of our lives. This rich writing is what makes even a simple sequence a standout.

The commentary offered is really how deeply ingrained technology has become with our real lives. Caleb’s therapy sessions are conducted by a bot attempting to impersonate and talk to him as Francis, his application is screened and rejected by an AI recruiting bot who “regretfully” informs him they don’t have any openings for him. In a world isolated by tech, Caleb yearns for some personal contact, someone “real”, not hiding beneath the façade of yet another machine. It’s heartbreaking to see him unsuccessfully try and understand the corporation’s requirements and offer himself to fit at some other place, only for him to realize his please are falling on artificial ears that are trained and coded to show not a shred of real sympathy. This dependency on technology is partly what helps Caleb pull off one of the more routine thefts by blasting music through everyone’s earphones as they carry out an explosion.

But it’s not just Caleb and Dolores as we’re introduced to new characters that may or may not play an important role in the episodes to come. Chief among them is John Gallagher Jr’s Liam Hempsey Jr. who Dolores manages to learn about and quickly establish a relationship with (thanks to the Season 2 human encyclopedia that the park had compiled) as well as his suspicious aide Tommy Flanagan’s Martin Connells who plays foil to Dolores’ plans. We see her go through this maze all on her own, not guided by any storyline but purely by her choices and whatever endgame she has in sight. The scenes with her serve as our gateway into the futuristic cars, bikes and flying vehicles that the world comes to inhabit, all with sleek designs and a slick aesthetic. Also back is Tessa Thompson’s Charlotte Hale although she doesn’t get much to do beside a brief scene establishing how she, now a host, has basically taken over Delos in William’s absence.

And then of course, there’s Jeffrey Wright’s Bernard, who’s had a few key developments of his own in the three months since the Season 2 finale. It appears he’s now two separate personas fused into one: the human and the host side, with the ability to switch between both by the flick of a button. As a human, Wright plays Bernard afraid, cautious and careful to tread any unacceptable lines. As a host, Wright is the same cold-blooded bastard who smashed Theresa Cullen’s head against a wall upon Ford’s command. His performance is miraculously convincing at depicting both sides which is why it should be interesting to see him return to the Westworld park as we saw him head toward.

Usually, Westworld has been outstanding from a production standpoint but the Season 3 premiere leaves a lot of its own episodes far, far behind. Los Angeles is recreated to stunning visuals by cinematographer Paul Cameron (who also shot the show’s pilot back in 2016) and they create at once a grim, yet metropolitan LA with heavy cyberpunk vibes at times. The scale of the episode is beyond ambitious and one can easily foresee HBO having granted $20 million or so for its production. And this is complimented in the chases and the one big action scene that sees Dolores taking out Martin’s henchmen in a long take shot from within the car, shifting focus between the windshield and the tablet screen view at the bottom. It’s inventive fight choreography at its finest and elevates the standard of production to what’s conveyed by its already impressive scope.

But really, it’s the kind of grim version of a futuristic reality that Nolan and Joy sell us, without being explicitly grim on the outside is what makes this episode tick the most and takes it above the standard, action-oriented sci-fi fare. The exteriors of LA are all smooth, glossy and architectural marvels. And yet, they’re host to a world that seems entirely devoid of any human affection. A lot of it has to do with a central AI strategy system, wisely named Rehoboam. That’s no random detail; the AI is featured in the intro as well and will undoubtedly play a bit role in the weeks ahead.

But for now, it has been doling out best course of actions for running humanity smoothly. And it is, but with that personal touch entirely gone. It has made people slaves to algorithms. And it’s not hard to see the personal parallels with our society. Walk outside and you’ll see people immersed in their smartphones, completely oblivious to the world around in. Nolan and Joy simply extend this concept and base our entire reality around it. They show at once, the benefits and foibles of an over-reliance on tech that’s a struggle humanity is currently going through. It’s only a matter of time before we get locked out of our own systems.

On the whole, the Season 3 premiere was an enticing affair, one guided by a more straightforward narrative but still posing interesting questions about the future of mankind and where we’re headed as a species. And while a lot of the seemingly obscure details may seem immaterial now, they may matter a lot more in the penultimate episode or two. In true Jonathan Nolan style, the showrunners have already implanted a very subtle idea in our head, one that comes in the episode through an early conversation between Liam and an associate. They debate on the possibilities of this world being a simulation, and how cool would it be if Westworld turned out to be a simulation within a simulation. That set me thinking: is this really the New World? Or is this just one of the 6 parks that are owned by Delos inc.?