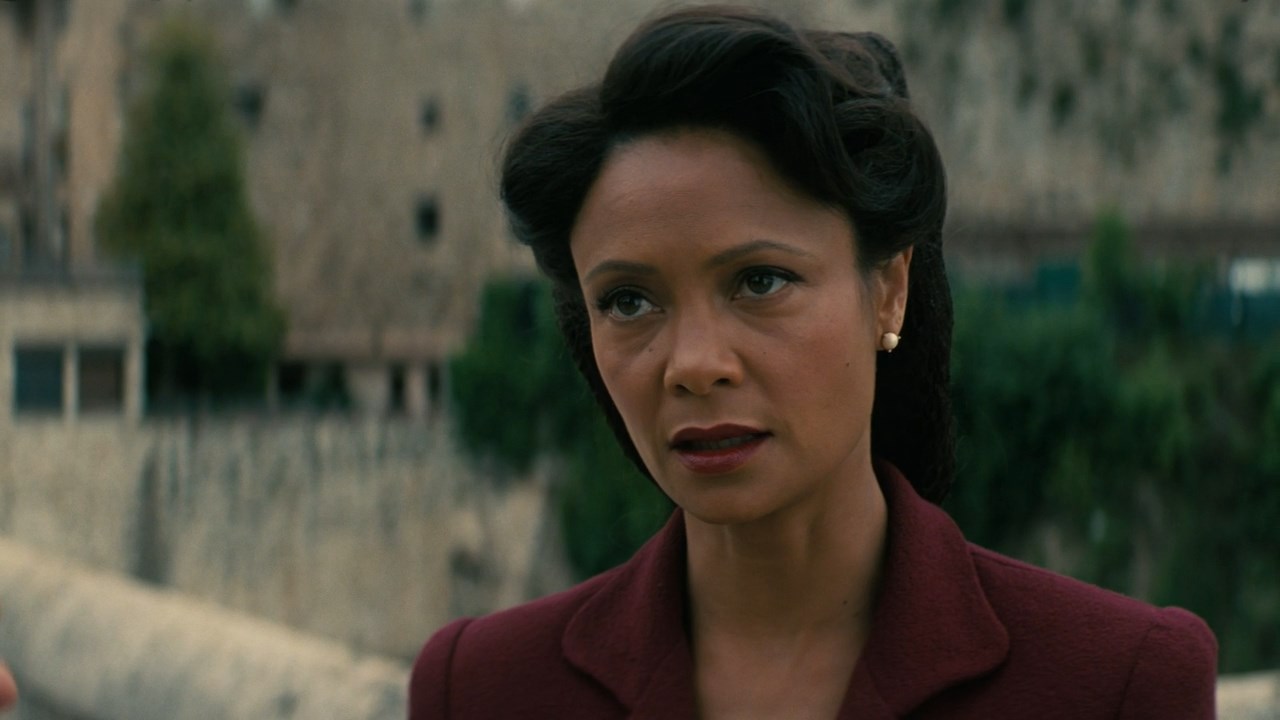 We’ve now been privy to three out of the six parks that Delos contains. And so, it’s rather kind of the showrunners to lift the veil of another theme park in its sophomore Season 3 outing. Warworld posits a delicious premise for Westworld lovers. Set in the World War era where Nazi Germany reigns, there is enough material worth mining to create an spin and entire new spin-off show out of Warworld alone. But our visit to this place is rather short-lived as it has more to do with our reintroduction to one of the series’ most well-rounded characters.

Continuing from last episode’s post-credits stinger, we follow Maeve as she awakens in a different world. Decked in early nineteenth century attire with a different hairstyle, it doesn’t take her long to access her programming and figure out something is off. When Hector arrives to her rescue, he feels the same, although we know better to believe that this is a ruse and she’s merely trapped in yet another narrative. What we still haven’t comprehended is how deep the rabbit hole goes.

Westworld pulls off an Inception of sorts by having Maeve trapped in a world within a world. For as she soon deduces, the entire theme park is part of a simulation world where the machines have simulated even Delos operations, including Felix, Sylvester and Lee Sizemore. Yes, Simon Quarterman returns for a delightful cameo with misplaced motivations that are a part of a programming error. As Maeve later reveals, he didn’t save me because he loved me or fantasized me; he did it because he was a good man.

The reveal of it all being a simulation is done ingeniously as the aspect ratio gradually shifts Oz style from 16:9 to 2.35:1. It’s a great trippy moment that for once brings back memories of the time when Westworld contorted time and timelines to keep audiences guessing. Also delightful to witness are Maeve’s attempts at not backing down but instead trying to find a way out of the system by overloading it to perform complex calculations such as the square root of -1, or even fiddling around with narratives sending the CPU utilization to spike. As a geek interested in tech, I appreciate these things being baked into the central plot.

The other character that gets more attention this episode is Bernard. His discovery of Ashley Stubbs frozen confirms at least one Season 2 cliffhanger that Stubbs indeed is a host and has been for a long, long time. At this rate, I’m left to wonder whether any humans will be left at all by the time the show ends its run. Stubbs and Bernard strike a partnership with the former vouching for his vows to protect hosts at all costs. It’s the one thing the old man assigned him to do.

There’s a huge, pleasant surprise in store for fans of another series. I was shell-shocked to see Game of Thrones creators David Benioff and D. B. Weiss playing supposed hosts from another park that looks like it’s based on the show. Also present was a dragon host of Drogon; they even used the same 3D model for the CGI bit. Fans have long been speculating and wishing for a crossover between the shows where one of the parks is modeled after George R. R. Martin’s world. Martin himself had expressed a desire for this and sort of given his nod of approval. Still, it’s surprising to see it happen in the flesh and if that indeed does become a huge part of Season 4, it would be an insane cold opening to watch Westworld in a Game of Thrones settings. Perhaps this could give Nolan and Joy a chance to course-correct and take on some of the more disappointing aspects of Season 8?

Anyhow that’s mere wishful thinking at this point. And it’s just a cameo; the bulk of the episode is about Maeve figuring her way out of Warworld by getting hold of her control unit in the real world, hacking into what looks like a Boston Dynamics robot. Seeing that thing get shot down by guards evokes similar feelings to the viral video where a Boston Dynamics robot was getting kicked by humans only to stand up or bounce back in eerily human style. It’s another nice subtle way to incorporate real-world events into the show’s proceedings.

I guess I have little more to say about this episode at this point other than appreciate the impeccable production values they put in depicting Warworld, if only for a few scenes. Set photos had already given a sense of how true the creators would be but it’s neat to see the extra effort they go through to incorporate so many different diverse settings in the show. I’m seriously starting to wonder where on earth could this park set to have so much real estate. A swarm of islands?