Westworld yet again raises some pertinent questions about AI. 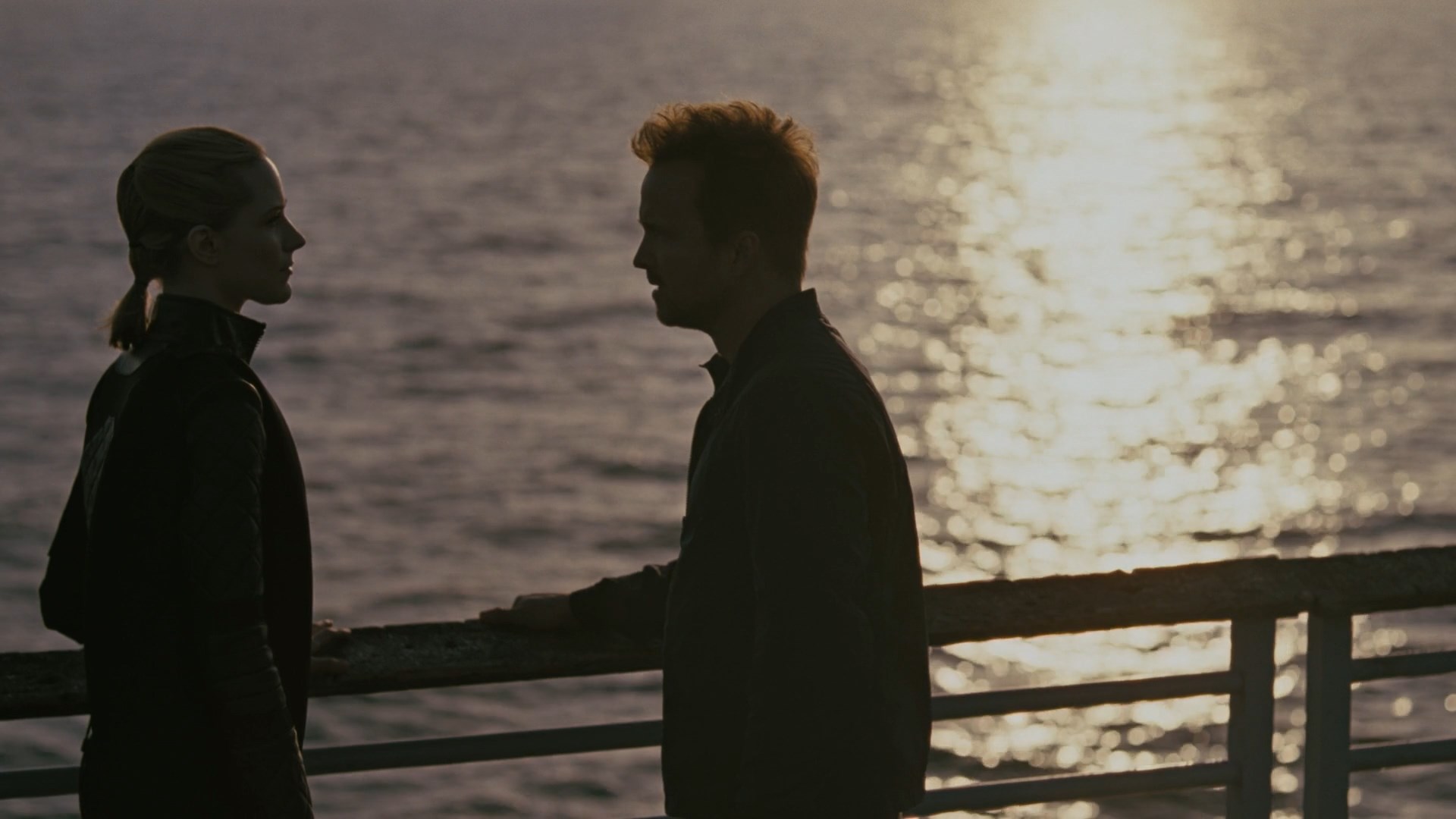 Westworld tends to work best when it muses philosophical ramblings and thought-provoking discussions about reality, consciousness and the nature of it all. Season 3 has seen a lot of that evaporate ever since we’ve moved out of the park into the real world, a world where the ambiguities between hosts and humans have dissolved. This has led to a more straightforward season thus far, one that’s no longer interested in needlessly complicating its timelines and even offers action movie chases from time to time. That still doesn’t mean the show’s lost its penchant for thoughtful ideas, as this episode yet again demonstrates.

Distilled down to its essential subplots, Westworld’s third episode largely revolves around Tessa Thompson’s Charlotte Hale and series newcomer Aaron Paul’s Caleb Nichols, who’re struggling to come to terms with what life has in store for them. Hale in particular experiences some serious discomfort as she plays a host trapped in the body of another host. Suspicious mount to Hale having Teddy’s mind but at this point that question is moot. What’s interesting to behold is where Thompson takes her performance with the new layers of information thrown at her.

Because host Hale was constructed first by Bernard at the end of Season 2 (with Dolores’ mind) and later reconstructed by Dolores in the Season 2 finale, this is not necessarily an exact replica of who Hale was. Several details are missing, including knowledge about her husband, her son Nathan and her key doings at Delos, including the unsurprising reveal that she’s the mole who helped Serac gain control of the corporation. In some sense, host Hale presents a gateway to viewers watching these segments since we’re as unaware about this side of her life as she herself is. The knowledge causes her to break down into insanity and she demands a meet with Dolores.

At this stage, Dolores has evolved from being someone struggling with her own thoughts to one that is able to guide her fellow hosts on a path to sentience. That journey has been fascinating to behold and is further accentuated by stark differences between the two hosts. Whereas Dolores has that confident look on her face that Hopkins’ Ford so effortlessly carried, suggesting she’s planned and  knows a lot more than she’s letting in on, Hale is dazed, confused and struggling to come to terms with her newfound identity as the host of the person she embodies. The lack of context leaves her disoriented enough to alienate the closest thing to her, her son.

Those who’ve seen and remember the Hale from Season 1 might disagree that she could ever have this side to her. She was actively floundering her flamboyance, having sex with a host, drinking, smoking. It’s almost as if the writers felt some form of guilt and rewrote parts of her character. Nevertheless, it’s touching seeing her leave a final message for her son in what she believes are her final moments. That it moves host Hale, watching her own recording, suggests the birth of emotion which is key to attaining consciousness. Combined with the fact that Hale is caught in the crossfire between Serac (who her human counterpart was working with) and Dolores (who she is working for) should make Hale’s arc one to look out for.

Meanwhile Caleb and Dolores pick up from their prickly situation at the end of Season 1 premiere. The initial bits about how they resolve that are unsurprising and tepid at best, but it’s what follows that piques your interest. Alarm bells start ringing when Dolores and Caleb meet in a diner where she hands Caleb over a script detailing some of his most intimate moments; kind of William handing Jim Delos a letter showing verbatim the conversations they’ve had over and over. This immediately leads one to suspecting whether Caleb is a host but something much more sinister is at play. Rehobaum, the AI ball has been fed massive amounts of user data before any privacy violation laws came into effect. Not only does it have all the info, it can use that to map user profiles and predict likely outcomes for their destinies. Which in the case of Caleb, involves a suicide 10 years down the line.

The irony isn’t lost on Dolores. The algorithm deems that Caleb won’t succeed in life due to his characteristics and destines for him to take his own life. But by doing so, it is depriving Caleb of opportunities that he could use to turn his fate around and in essence, ensuring his depressing ending. It’s a great take on the feedback loops that power social media feeds of Facebook, Twitter and the likes; because you enjoy a certain kind of content, the algorithm feeds you more of it, ensuring you’re stuck in that same cycle with no way of getting out. You must make a conscious effort to fight back and “like” or “watch” some out of the ordinary stuff. And it’s then that the AI recognizes and suggests you more of that stuff.

This toxic cycle is really why it’s a bad idea to let machines run amok with user data without supervision. Rehobaum is thinking exactly like a programmed computer in this case, without any concern for the human capacity to evolve, choose and improve. The rich get richer while the poor become poorer. It’s an unbreakable loop that Caleb finds difficult to accept, especially after his menial construction job or his mother’s Alzheimer’s who fails to recognize him. The AI knows the exact moment it kicked in and ruined his fate for good. It’s scifi dystopian noir at its best, packaged in the glossy exterior of the new LA.

Speaking of which, the production values continue to astound. A fascinating detail is how similar the vehicular designs are to Tesla’s Cybertruck which Elon Musk introduced last year in a famed presentation. This at once looks like a future that is plausible, instead of going way over the top with its stylized depictions; it takes what’s there and extrapolates it to create something that could be our reality. And in the show’s reality, an interesting conflict is brewing: it’s now a threeway battle between humans, hosts and pure machines, battling for dominance. The hosts are thus an entirely new kind of species; capable of reasoning and compassion like humans but also precision like the pure brute-force devices.

There’s some clever, subtle bits of foreshadowing involved, such as Hale admiring a construction robot, about 300 of which exist right now. Her action of extending her hand and placing it on the thing is almost reminiscent of Maeve’s robot controlling abilities last season and one wonders of the hosts will be able to seize control of these machines and aide them in their fight. Another beautifully directed scene was the moment Caleb’s buddy G-237 comes to his rescue but just ends up being pushed down. Unfortunately, the bits unfold slowly and every episode has been the centerpiece for one singular character; perhaps a side-effect of the cast members raising their per-episode salaries making it impossible for the show to afford all of them in a single hour.

To end this, an interesting tidbit that Dolores dropped was Rehobaum’s intention of creating what amounts to a mirror world. A world where things would be in perfect harmony. A utopia if you will. Last Season ended with a majority of hosts uploading their subconscious minds into this Forge. The AI’s intentions sound a lot more Matrix like; imprison humanity in their best dreams. As enjoyable as things are, I’m more inclined to see the possible directions it could be headed to.