Westworld reveals the first of its hopefully many more twists. 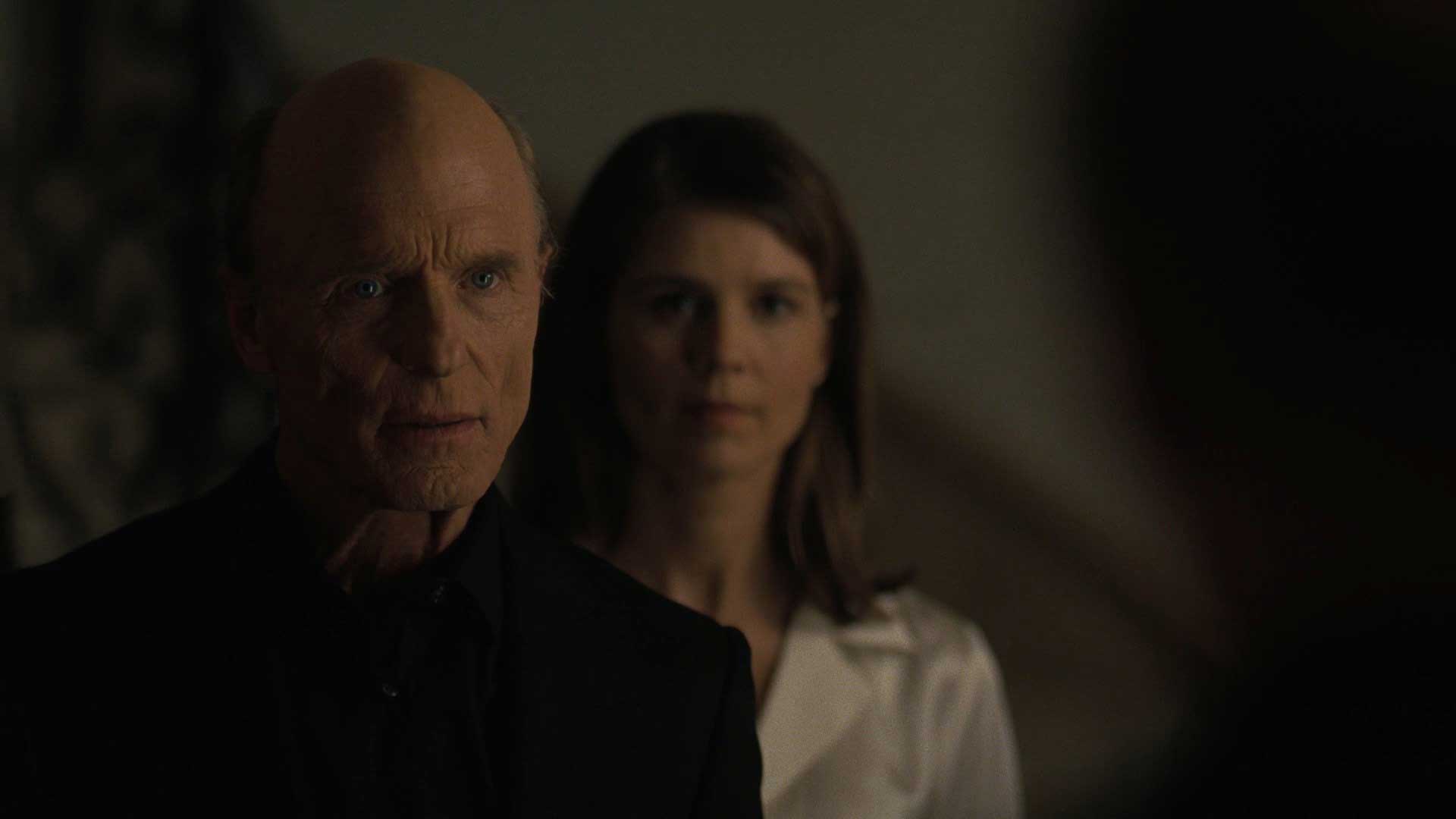 When Episode 4 began with a cold opening reflecting upon the Man in Black’s disheveled state of mind, it felt as though old times are bad. Ed Harris returned, delivering a tragic performance illustrating his confused state of mind, finding it incomprehensible to separate reality from illusion. He’s still questioning his choices from Season 2, particularly of killing his daughter Emily who he taught was a host and who now returns to taunt him in his hallucinatory visions. He’s deranged, broken and almost bordering on the verge of a psychological breakdown. And you know when Westworld presents such a gloomy scenario for us to chew on that the show’s just getting started.

In its fourth episode, Westworld didn’t hold back any punches and employed most of its principal casts, splitting them up into three parallelly running stories. The aforementioned track with William soon had Tessa Thompson’s Charlotte Hale rejoin as she convinces him to return to the Delos board to shoe off Serac’s attempts to take over. They only had a brief interaction in Season 1 I believe which makes it all the more interesting to see the two square-off verbally, ideologies clashing and all. Hale on her part is concerned that William will identify her as a host (which he partly does once), having spent so much time in the company of his investment.

The theme of pairs runs abound as the other subplots also feature two people working together. Serac reveals his motivations to Maeve that involve creating a near-perfect world free of human intervention; a world where they wouldn’t nuke each other out, as they did with Paris, the city he grew up in with his brother. I have a nagging suspicion that his brother could be revealed as being someone equally important, perhaps Ford himself (he did have a brother and their childhood dressing sense evokes some similarities). Nonetheless, seeing humanity tear itself apart gives Serac the final straw of motivation he needs to study people so he can manipulate them to maintain peace. Where he failed, Ford succeeded, and that theme park data becomes the central piece of information he’s after. He consequently sends Maeve on a wild goose chase, possibly implanting within her abilities to control anything built on technology, including Uzis of Japanese gangs.

The other pairs concern Dolores and Caleb as well as Bernard and Stubbs; the former attempting to infiltrate and take Liam Dempsey hostage while the latter believing Dolores to have already done that and replaced him with a host. In that sense, as Tommy Flanagan’s Martin Conells points out, they’re a bit too early. This leads to an elaborate gala / whorehouse auction sequence that itself plays out like a simulated version of reality, leading Dolores to comment on the nature of its similarities to that of the real world. And must I admit, it is mighty cool to see Hiroyuki Sanada back as Musashi, now implanted himself as the leader of a Yakuza gang who takes on Maeve in an expertly choreographed samurai fight.

The twist, that cements all storylines together, happens to be the host protagonists of Martin, Charlotte and Musashi who are simply copies of Dolores. The reveal itself is handled impeccably, with all three storylines edited to converge at the revealing point simultaneously. That instantly puts to rest, all the theorizing about Hale being a possible version of Caleb and showrunners Jonathan Nolan and Lisa Joy pulling the multiple timelines twist again. I myself was beginning to believe those storylines, seeing as there hasn’t been an extensive interaction between Caleb and Charlotte but it’s great to see the writers (Joy included) clearing things out this early to put the speculation to rest. Perhaps they weren’t really lying when they said the season was more linear and narratively conventional than past seasons. Or perhaps, this is part of an elaborate con that will reveal itself in the weeks to come. The inclusion of characters in pairs was perhaps further alluding to the notion of copies throughout the episode.

But Dolores trusting no one else to do her job but herself is built on the back of a strong foundation: her experiences leading the Wyatt revolution in Season 2. She realized, and commented, that not everyone is meant to make it. Certainly not Teddy in his existing form, whose code had to be modified by Dolores to reduce his virtuousness. But even that didn’t stop him from losing his sanity when he started gaining sentience and the resulting conflict led him to shoot himself. Dolores couldn’t simply have any more of that; she’s too far gone in the game to return back to playing the rancher’s farm girl. So it had to be her, which explains the multiple host control units she smuggled were of her own.

There are at least two interesting ramifications to consider here. One, since five control units were smuggled out, and four have been accounted for (including Dolores), there’s at least one more version of hers that has either yet to be implanted or is already roaming around. She might have to decide who to hand it to her; perhaps Caleb gets injured and she implants her consciousness on his body. The other is the presence of a host-human hybrid control unit that was glimpsed at in the first episode. Curiosity mounts as to who that belongs to.

Thematically, the episode dealt a lot more about the hosts beginning to see the real world for what it really is: much unlike their own. The parks had hosts stuck in loops, living the same routine over and over, with some exquisite set pieces here and there to offer some distraction. Much as God made man in His image, humans have essentially modeled the park on their own life experiences; as Lee Sizemore did in Season 2 when he wrote Hector and his backstory as a way to deal with his own heartbreak. As Maeve walks through the Chinatown-esque area and Dolores stares at the gala around her, they both share similar emotions in that moment. That humanity is stuck in loops of its own making, with intricate narratives and a plethora of moving parts to it. Their park was not so different from reality after all.

It’s also fascinating to revisit William’s state of mind from the cold opening and beyond. Katja Herbers returns as Emily as well and her chemistry with William makes those sequences eerily unnerving to watch. It only helps that Harris conveys the look of a man lost in isolation and struggling to discern his choices and his resulting actions. “How could this be all there is to it? There has to be something more to the maze!” You can feel his mind thinking, frustrated and trapped in the strange reality concocted in his own head. That Ford is out there to taunt him by throwing unimaginable stuff at him. It echoes the viewer’s sentiments when watching the show at times because of the complexity in understanding what’s really happening and what’s just a scripted lie.

The world itself meanwhile continues to be fleshed out. There’s a nod to what looks like SpaceX(?) where multiple rockets land and take off in quick succession, suggesting Elon Musk perfected the reusable rocket. Transactions happen through biometrics and an additional hash-key to use as authentication for carrying out transfers for someone else. Encryption keys are baked into the bloodstream and prostitution is legalized in a rather exuberant sense when buyers bid for the best looking whore. These small touches only help flesh out the real world which we’ve been deprived to glimpse for two seasons now.

Director Paul Cameron who served as cinematographer on the Westworld pilot, returns as director this time and uses his expertise in photography to construct some great sequences around William’s mental breakdown and eventually confinement to an asylum. But he also handles the larger than life action with aplomb by giving us a delicious fight between Dolores and Stubbs that looks like straight-on a Terminator-on-Terminator battle. The duo pack the punches and thanks to some heavy sound design, every kick lands hard. It’s one of the most satisfying brawls seen on the show in quite a while.

There’s little of Westworld Season 3 that’s not to like at this stage. It’s moving along at a brisk pace, trying its best to appeal to a wider range of audience by incorporating thriller elements, and delivering a well-rounded plot that’s not simply a bad-guy-wanting-to-take-over scenario. If anything, Serac’s motivations of building a world devoid of conflict are well-intentioned and it’s Dolores who’s a bit misguided in her approach to her missions, which gives the archetypal hero-vs-villain conflict a new view. And mysteries continue to lurk around; notice the facility where Maeve and Musashi fight and the barrels of white liquid it releases; it’s the same liquid that was used to bathe the host bodies in Season 1. Or that Serac has taken over Arnold’s home and calls it the “Divergence”, the same term used when placing the show’s locations. There’s still the lingering issue of Bernard being deliberately let loose by Dolores to keep a check on her. Is the final park truly the real-world? Curious reveals could lie ahead.