After months of intense rumor mongering and a build-up fueled by leaks and hype, Apple CEO Tim Cook finally took the stage to unveil some new pieces of hardware in Apple’s lineup. The impressive lineup, which we had profiled earlier today, included a new Apple Watch, 4K support for Apple TV and the next generation of iPhones. While there were no major surprises in terms of reveals, the iPhone X released to commemorate the 10th anniversary of the original iPhone was the clear standout.

With a lofty price tag attached, many might be questioning the viability of such a device, especially since a lot of its supposed features can be found in pre-existing Android phones. However for what it does, the iPhone X does present an interesting proposition. Here are ten interesting things about the new iPhone that we could uncover from today’s event.

Apple’s iPhone X features a brand new design replete with an edge-to-edge display. Baring a slit at the top for things like the front camera, the earpiece and the proximity sensor, the entire front is covered entirely with screen. This represents the first major upgrade in design for Apple since the iPhone 6 back in 2014 which was when Apple also increased its annual smartphone lineup by introducing the concept of the plus-sized variant. While Samsung and Xiaomi (and even the Essential Phone) may have beaten Apple to this game with their Galaxy S8 and Mi Mix devices, one can’t deny that Apple’s design looks classy and reeks of symmetrical perfection.

Moving more and more towards the standard manufacturing style of its nemesis Android devices, Apple has opted for OLED panels against the LCD that it traditionally uses. It claims its OLED displays are still superior to the existing OLED displays on the market in the accuracy of their color reproduction although some very reliable sources had previously reported that Apple would be sourcing these panels from Samsung itself, having placed an order of some 70 million OLED panels. Likewise, Apple has also gone for a glass finish on the back that should help it achieve smooth Wireless charging.

Another radical outcome of the edge-to-edge display is the missing home button. After Apple infamously ditched the 3.5 mm headphone jack with last year’s iPhone 7 in a move that earned it lots of criticism, Apple has now gone ahead and removed the home button altogether. Furthermore, moving a step further from its rivals, Apple has foregone a software home button and reworked its interface to run without the home button entirely. 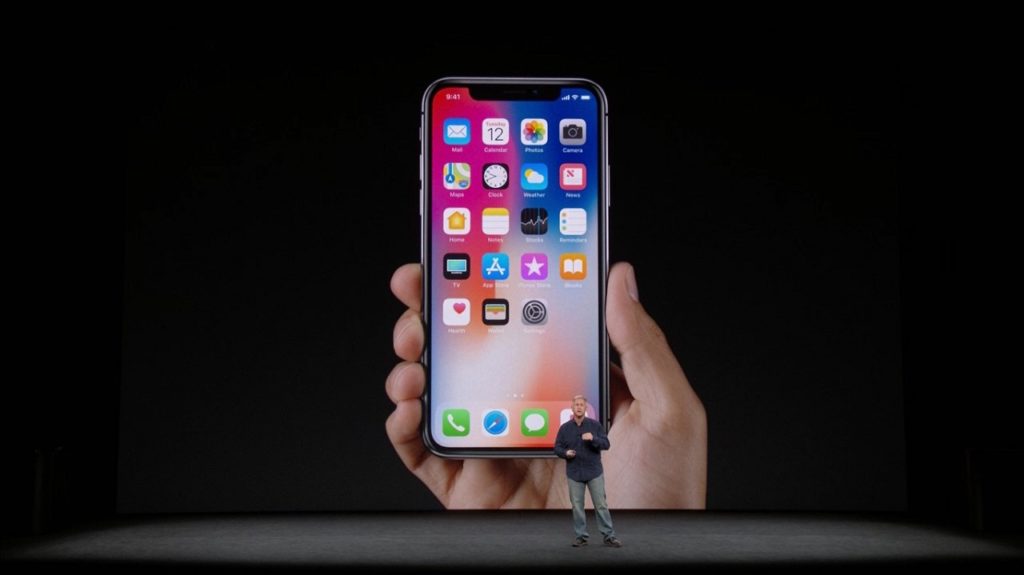 This is definitely a bold move and required reimagining actions dependent on the home button and mapping it to touches and swipes. Thus accessing the homescreen now requires a swipe-up whereas exiting an app requires a quick swipe to the top-right. Additionally, the lack of a home button opens up some new methods of interaction such as swiping left and right between apps themselves, a feat made possible by the improved hardware.

The iPhone X comes with Apple’s A11 Bionic chip that allows for more powerful neural net and augmented reality operations. Neural net processing helps the iPhone up its game with face-scanning whereas stronger augmented reality support along with the presence of ARKit mean richer AR experiences for consumers and enthusiasts alike. Apple also demoed some filters from SnapChat making use of the phone’s AR capabilities and they looked quite photorealistic in the demo as well, signaling the possibilities with AR of the future.

With the home button gone, iPhone owners need a new method of securely unlocking their phone and performing other tasks dependent on the now defunct Touch ID. A fingerprint scanner embedded within the glass display would’ve been ideal except we’ve seen how difficult it is to make it work just yet. The solution? Enter Face ID, a sophisticated system which stores a mesh of the user’s face using up to 30,000 points and processes it in real time via neural nets to identify a user quickly. This will take over Touch ID activities from hereon, whether it’s unlocking your phone or processing payments using Apple Pay. 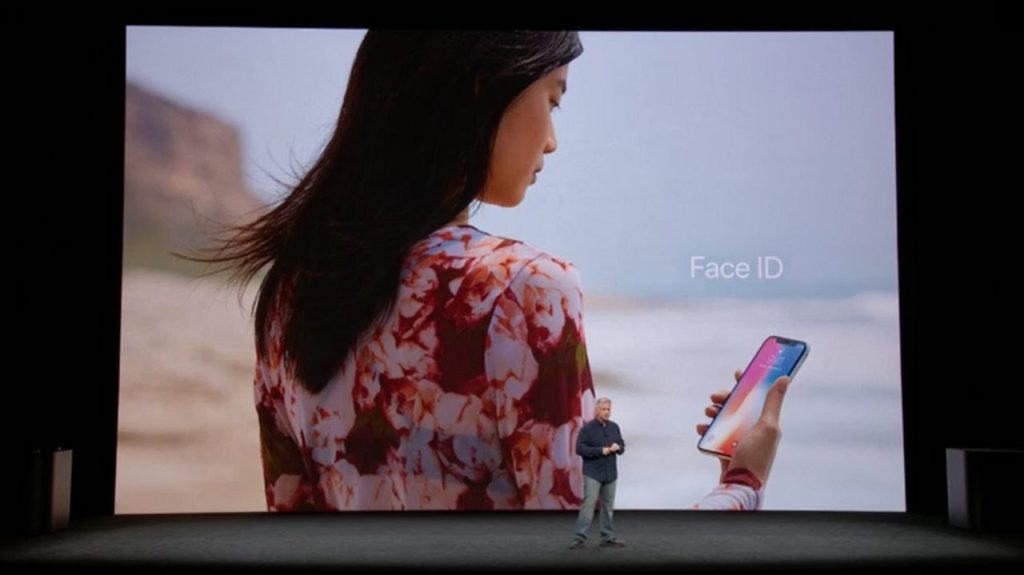 The interface itself is remarkably quick (even though Apple ran a snag at the demo once when unlocking using the Face ID). Apple Vice President Phil Schiller explained that the team took care to safeguard against ways to fool the system using photos, different looks and even masks. He claims the chances of someone else unlocking your phone using Face ID are 1 in a million so those are some pretty low odds to beat.

Perhaps the most impressive feature of the iPhone X demo was the introduction of a new form of Emojis called Animoji. This basically acts as a motion capture system of sorts in that it allows you to put your facial expressions over a set of pre-defined animal characters. Thus you can record yourself making different expressions and the iPhone’s neural net system will overlay those expressions and animations over the emoji characters in either image or video form. These can then be exchanged over iMessage. 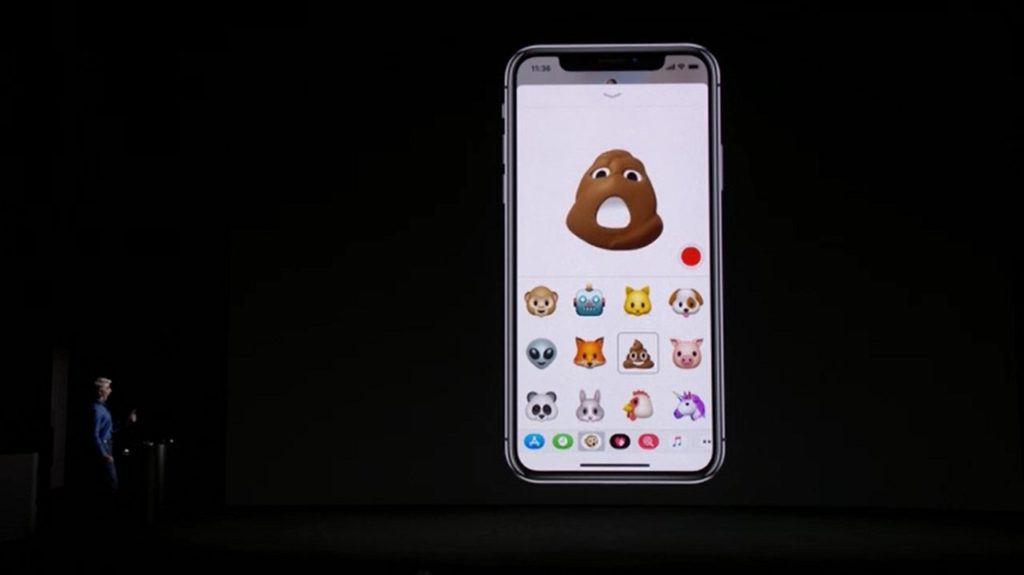 This truly opens up an infinite set of possibilities for the future. While we’re starting with a small set of emojis now, iOS could gain the ability to customize any emoji in the future. Moving further ahead, this system could be looked at as a primitive face capture system of sorts and could allow budding film-makers or practically anyone to create their own Emoji Movie.

The new iPhone features improved water and dust resistance with an IP68 rating, a step up over the IP67 predecessor. Granted this isn’t really a standout feature of the iPhone X in that the iPhone 8 and 8 Plus have it as well, it does make for a compelling package what with water resistance and wireless charging having become flagship staples in recent times. Which brings us to …

Apple introduced a new way of charging devices wirelessly (and a new accessory market to be opened up as well) with Airpower. It’s basically a charger connected to a mat on which you can place multiple iOS 11 devices to be charged wirelessly. The mat recognizes devices as they’re placed and displays them in the largest of the device screens.

Portrait mode in the rear camera is already old school in a year since Apple introduced it to mass market with the iPhone 7. Enter Portrait Selfies – in a nutshell meaning selfies with the portrait mode. This is sure to result in a swath of users jumping on the iPhone X bandwagon and taking bokehed selfies. The selfies are supported with studio-level lighting effects which can be toggled through the new Camera interface introduced with the iPhone 8 using left or right swipes. The lighting is generated in real-time using Apple’s new hexa-core CPU. 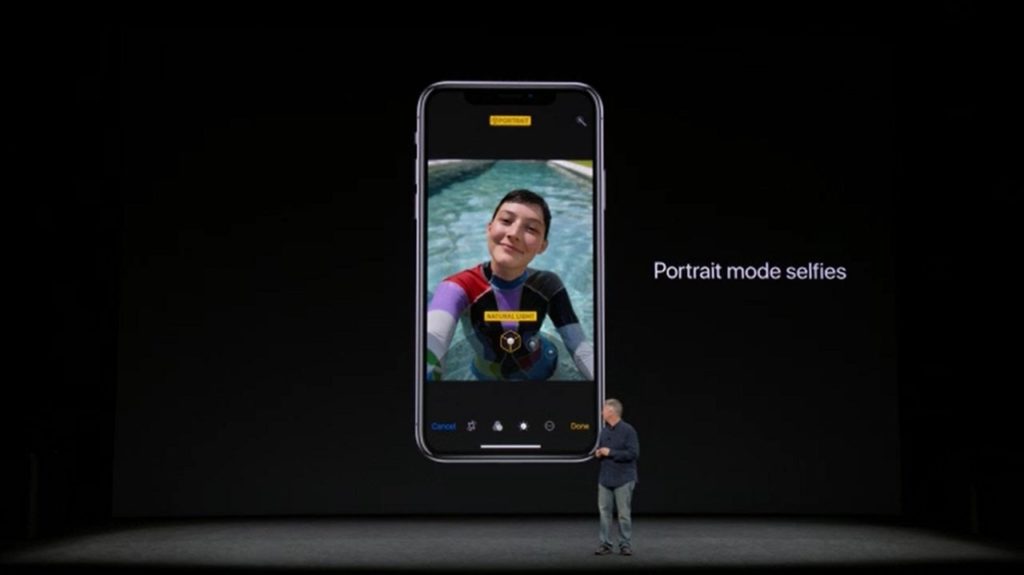 Under The Hood Improvements

Finally, the iPhone X features plenty of under the hood improvements as well, from using the latest Bluetooth 5.0 standard, to upgraded storage options with 64 GB and 256 GB of storage (the rumored 512 GB storage option is not there). Support for USB 3.0 is also there along with dual optical image stabilization in its f/1.8 and f/2.4 pair of rear cameras.

The iPhone X is priced at a massive $999 and should be available in Space Gray and Black color options. Pre-orders begin October 27 with the phone available to be shipped on November 3.

Everything you need to know about Apple’s iPhone event today