In a rather unsurprising and expected launch event, Google announced a bunch of hardware which largely represents upgraded versions of last year’s products. Included among the list were new Google Home devices, a brand new Pixelbook and of course, the two new Pixels. Despite the leaks though, there were still a few surprises and a collective gasp or two echoed through the auditorium frequently. Let’s jump right in and check out the event highlights and announcements

Earlier at Google I/O this year, CEO Sundar Pichai boldly proclaimed Google’s shift from being a Mobile-First to an AI-First company. The search giant is not backing down from its claim but has only served to increase its emphasis on machine learning and artificial intelligence, not just looking to incorporate them in as many of their products as possible but using synergies between the three components of hardware, software and AI to solve problems in their most natural way. The point was made at the beginning of the event by Pichai and was repeatedly hammered home throughout the event with the announcements that followed.

Google Home: The Mini and the Max

Lead of Product Rishi Chandra took the stage to unveil two new Google Homes – the Google Home Mini and the Google Home Max. It has a smaller cuter design and runs the same powerful Google Assistant. With its scaled down form factor, it could come much handy in terms of placement around the house. The Google Home Mini comes in Coral, Chalk and Charcoal with Google claiming to have custom designed the fabric and the yarn that covers the device. It will retail for $49 and is well positioned as an Amazon Echo competitor at that point. The Mini will be available in seven countries at launch: Australia, Canada, France, Germany, Japan, UK and US. Pre-orders begin today with the device shipping starting October 19. 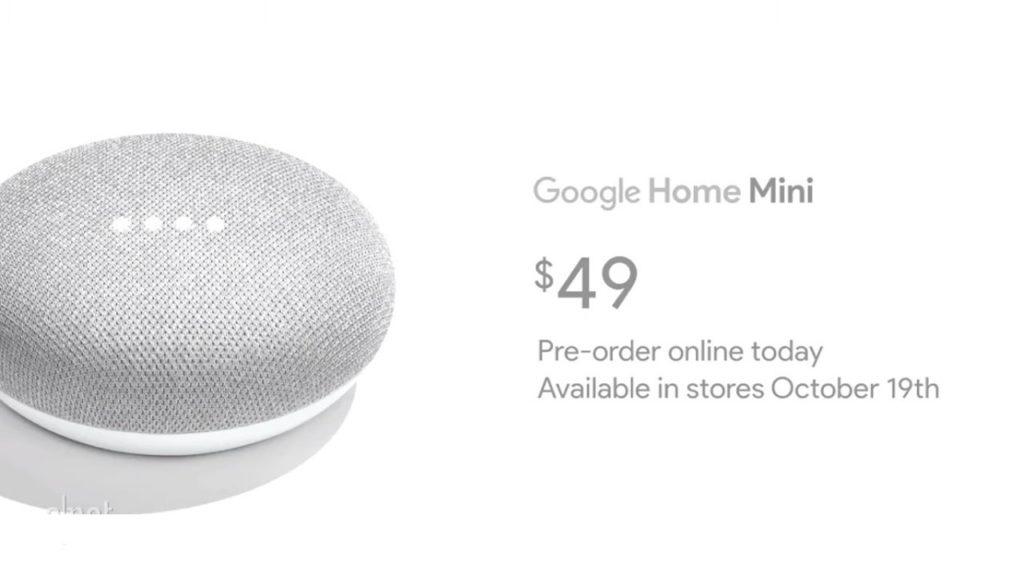 Immediately following the Mini, Google announced the Max, a much larger Google Home with smart acoustic speakers that adjust the volume of the audio being played according to the device’s placement around the house. Rishi explains that Google applied machine learning and tested the device across thousands of different room configurations to train it to better detect and correct its pitch, tone and volume. The Max retails for a slightly hefty $399 and will be available starting December with early adopters getting one year’s worth of YouTube Red subscription free.

Matt Vokoun, Director of Product Management next took the stage to unveil the Pixelbook – Google’s laptop-tablet hybrid solution that aims to take on the creative space occupied by Microsoft’s Surface. The Pixelbook lends itself to be used in four different ways: as a laptop, as a tablet, as a screen on a stand (think Echo but a lot larger) and as a writing pad. It weighs a kilo, is 10 mm thin and runs Google’s Chrome OS which has grown since the release of the original version. Specs-wise, it comes with Intel’s Core i5 and i7 processors with support for up to 16 GB of RAM and 512 GB SSD storage.

A hybrid solution means there’s also a stylus. Enter the Google Pen, an accessory for which Google worked with Wacom to design something with as little as 10 ms latency. The pen features 60 degree angular awareness and over 2000 levels of pressure sensitivity. Most interestingly, the Pixelbook can work with the same charger used to charge Pixel phones. The Pixelbook retails for a hefty $999 with the Pen costing an additional $99. It comes in three configurations and will be available at launch in the US, the UK and Canada on October 31.

After dancing around the Home and the Pixelbook, Google finally announced the hardware most anticipated from this event – the next generation of Pixel phones. The Pixel 2 comes with a 5-inch Quad HD OLED screen with a 100,000:1 contrast ratio and an all aluminium body with premium hybrid coating. The power button is colored (red in the demo) for a fun effect while the phone also includes stereo speakers along with a finger-print sensor. It comes in three color options which feature Google’s now famous spin on normal color names: Kinda Blue, Just Black, Clearly White, all being received to a huge applause.

The bigger Pixel XL 2 has a 6-inch Quad HD Plastic OLED display (LG’s OLED) with an 18:9 QHD screen amounting to an impressive 536 ppi. Google claimed the wide color gamut and dynamic range was available in both phones unlike the competition which preserved the best features for the bigger device, a statement that again drew wild applause seeing how much of a direct hit it was at rival Apple. Surprisingly enough, both Pixels did away with the 3.5 mm headphone jack, a decision for which Google once mocked Apple in last year’s Pixel launch event. 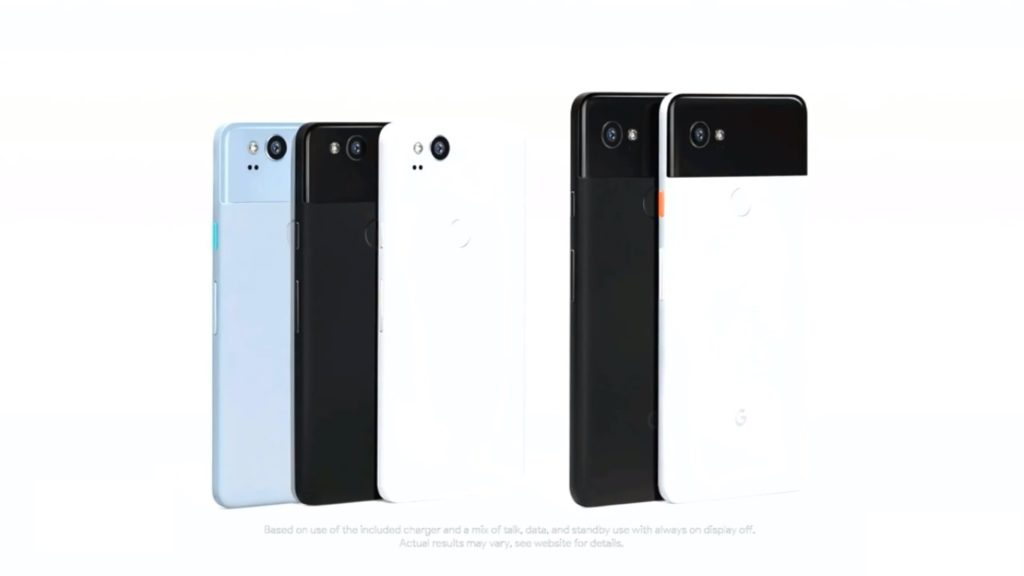 The camera was the defining aspect of the first version Pixel phones and Google reclaims the top spot once again with a DxoMark score of 98 for the new Pixel phones, surpassing the iPhone 8 and 8 Plus’ 94. The camera supports OIS and EIS, motion photos which capture 3 seconds worth of movement and in a rather interesting twist, Portrait Mode. Yes the mode that adds a bokeh effect is something the Pixels support with just a single camera thanks to its advances in machine learning. This opens up an interesting possibility of single camera phones being able to use the portrait mode via software. As with Apple, AR received a small demo of itself with stickers from Netflix’s Stranger Things interacting with each other on stage.

The Pixel phones will be available in six countries at launch: Australia, Canada, Germany, India, UK and US. The smaller one retails for $649 while the larger one is for $849.

The Daydream received an upgrade as well with the new version available in three colors and costing $99. Perhaps more interestingly, Google unveiled Pixel buds, their answer to Apple’s Airpods and also the reason they ditched the jack. The Pixel buds have the Google Assistant built in which can be invoked by a soft squeeze. The buds also allow for real time translation as was demonstrated by a live conversation between English and Swedish speaking people taking place and being translated on the fly. The buds retail for $159 and are available for pre-order starting today.

Finally, Google unveiled Clips, a pocket camera that can be used to capture life’s more candid moments. Google claimed it was for people who don’t want the hassle of carrying a camera around although I don’t see how Clips solves that problem entirely since it needs to be placed or held for the recording to happen (it also opens a whole new can of worms with regards to privacy which Google was quick to assuage concerns of). Clips will W set you back $249 and is shown as being coming soon. 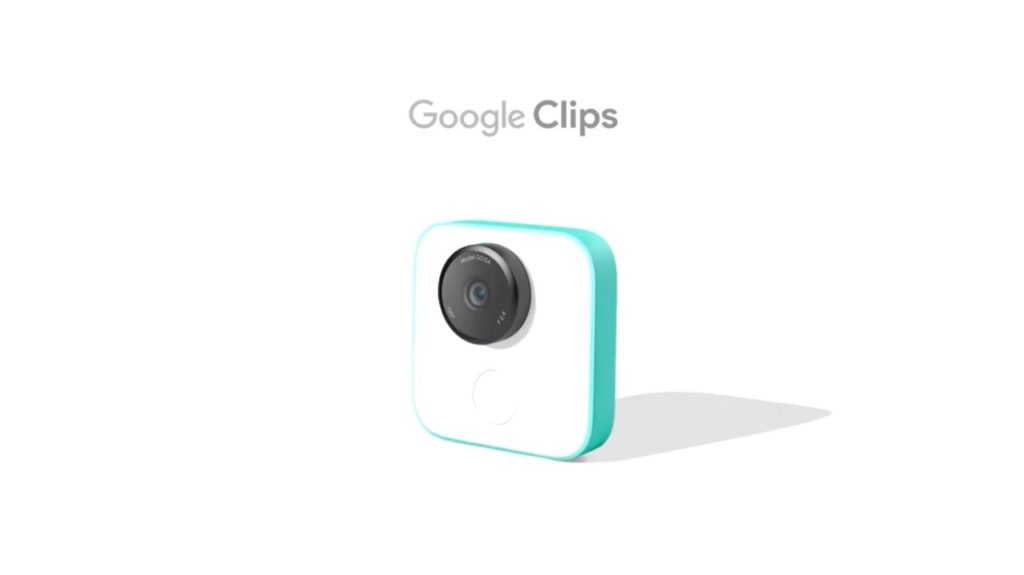 That was Google’s entire lineup. Google has certainly come a long way from being a search and later on software-focused company and it now has a mini-hardware lineup of its own in its efforts to reduce dependency on its monopolistic search business. Which of these will give Google the revenue numbers its looking for remains to be seen.