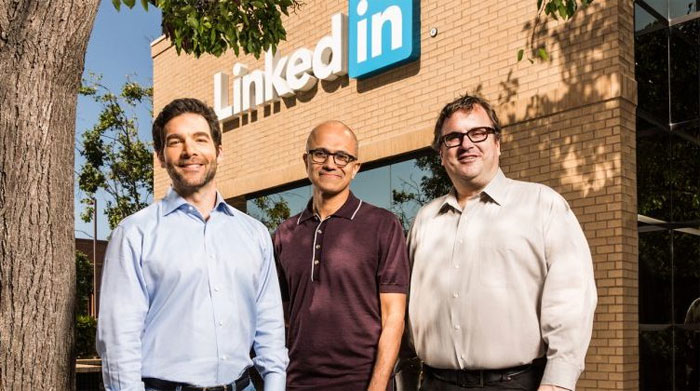 The tech world has been abuzz of late with yet another high-profile acquisition. In what seems like a deal that’ll see a massive amount of money exchanging hands, Microsoft has agreed on acquiring LinkedIn for $26 billion. That’s about $196 per share of LinkedIn against its current value of $131 at the time of the deal. The price has since jumped to $191 as of this writing making the deal, the third largest acquisition in the tech industry (fourth if AOL’s purchase of Time Warner is classified in the same vein). And that’s just when we thought Facebook went too far in splurging $19 billion for WhatsApp although, in principle, LinkedIn seems to be a lot more valuable than WhatsApp. After all, we’re talking about a network that stores the professional information of over 300 million users right down to their emails, schools, colleges, and job related info while also serving as an active job hunting portal against another that provides over 700 million mobile numbers along with some of their images and text messages.

On the Surface, there doesn’t seem to be much Microsoft can do with LinkedIn. Dig a little deep and one can see some possible integration between the two companies revolving around Microsoft’s Enterprise suite of tools and LinkedIn’s premium services. Imagine writing a Resume on Microsoft Word only for it to be seamlessly linked to your LinkedIn account. Or imagine the possibility of sharing spreadsheets, charts and presentations between different members among LinkedIn, who may or may not be a part of a group. To take it further, online job postings on LinkedIn can have Job Description Documents linked using Microsoft Enterprise tools instead of the crude alternative of having the user download similar documents. Finally, who knows, OneDrive could host a LinkedIn user’s entire document repository. Or, Hotmail could replace InMail.

How Microsoft plans on using LinkedIn and fitting it into its strategic vision remains to be seen. Given the size of the deal though, it’s unlikely we’ll be seeing results any time soon.

Why Does Google Need Allo And Duo

The Top 4 Microsoft acquisitions that failed